We keep hearing the term “unicorn companies” in news articles and from well-known investors. It is an investment term coined by a U.S venture capitalist in 2013. The definition is straightforward, “a private start-up company that has a valuation of $1 billion or more”. But implicitly, they usually represent the following characteristics that a company possesses:

So among all the startups in the world, they are considered rare and mythical, and the capital market is obsessed with them.

This study aims to analyze and understand unicorn companies, and answer the following questions,

The data used for analysis is a Kaggle dataset originally scraped from CB Insights. It covers all the current unicorn companies in the world (as of April 2022), which included 1074 companies and 10 features- company name, valuation, date joined, industry, city, country, continent, year founded, funding, and select investors.

New features are created for analysis, such as the age of the company, the number of years for a newly founded company to become a unicorn, etc. 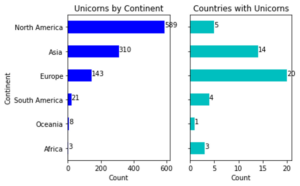 The top 3 continents are North America, Asia, and Europe, and Europe has the highest number of countries with a unicorn. This aligns with the overall conditions of capital market and industry innovations in these regions. 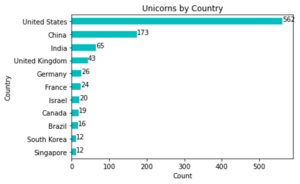 The United States and China are the Top 2 countries in terms of the number of unicorns, accounting for 52% and 16% respectively. 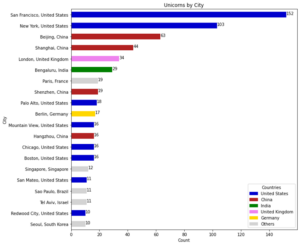 Among the Top 20 cities, 8 are from the United States. Bay Area, New York, Chicago and Boston are among the top areas across the state. 4 from China, and they are the most developed cities on the Eastern coast.

The US and China are again leading in the overall development as they have multiple startup hubs across the nation. 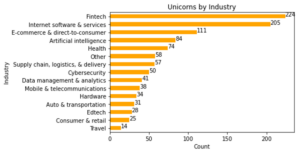 The Top 4 industries are

They are all tech subsectors, and some other smaller industries like hardware, mobile and ed-tech are also tech-related. For other traditional industries, it can be found that many large unicorns in these sectors are also powered by innovative technology, e.g. Instacart in Supply Chain, logistics & delivery sector and Yanolja from Travel sector.

The following analysis is on distributions of company valuation by industry. There exist extremely highly-valued companies in some industries like ByteDance in AI and SpaceX in Others. Both are over $100 billion in valuation. 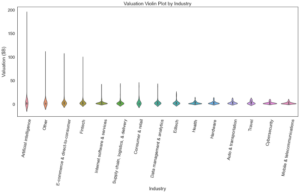 Diving into calendar years and the number of years for a company to become a unicorn, two patterns are captured,

Upon the above analysis of different features, the contrast between the US and China and unicorn booms are compelling for further exploration. Specifically, the research questions are,

1. As the US and China are the top two countries with the most unicorn companies, how do they differ in terms of industry, recent trends, and valuation? 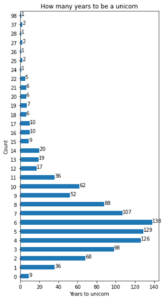 2. What happened in the years of the unicorn boom? 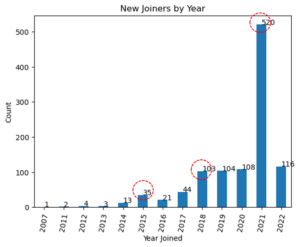 In most industries, the US has more unicorn companies than China. 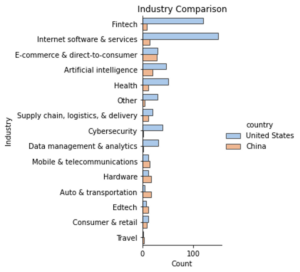 Focusing on the composition of industries in each country, the U.S. unicorn companies are relatively concentrated in Fintech & Internet software & services. Whereas Chinese unicorns are more dispersed in different industries. The top industry is e-commerce & DTC. And the number of companies in other major industries is at a similar level. 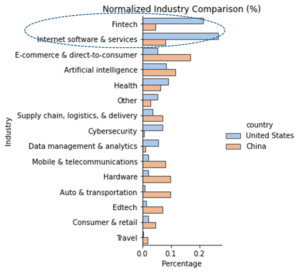 Regarding recent trends, 2021 was a big year for unicorn companies both in China and the US. There was a major hike in the U.S. in 2021. While in China, the number of new joiners had decreased since 2018, but the downward trend was reversed in 2021.

The industry composition was also quite different between the two countries. The pattern aligns with the industry comparison concluded in the previous section. 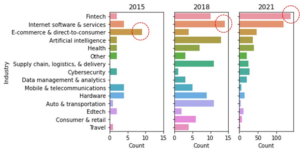 In terms of company valuations, disregarding outliers with extremely high values, it can be deduced that there is no significant difference in average valuations across industries, with an average ranging from [$1-2 billion]. The U.S. average is higher in all sectors than China, except the consumer & retail industry. 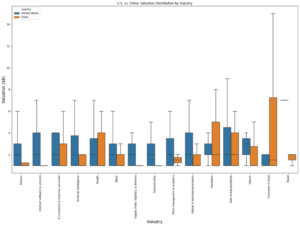 As for the mega-unicorns, they drive up the average valuations in these industries. 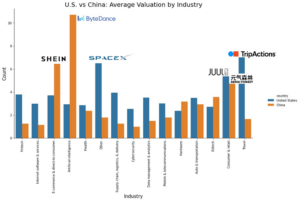 This include JUUL Labs, SpaceX & TripActions in the US and ByteDance, Shein & Genki Forest in China.

Recall from the previous observations, there were 3 unicorn booms in 2015, 2018 and 2021. To explore what happened in those years, the number of years for a company to become a unicorn (“unicorn age”) is averaged for each year. The unicorn age was relatively shorter in boom years, and this corresponded to the larger number of new entries in those years. 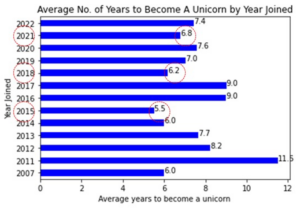 Based on external research, the abundance of capital in VC/PE market in those years pushed up the valuations of startup companies and contributed to the phenomenon.

Selected investors of each unicorn company were not covered in the analysis. Without considering the brand names of investors, the number of investors alone is no direct indication of how successful or how big a unicorn is. Also classifying different investing entities belonging to the same investor (e.g. Sequoia China & Sequoia India) demands extensive business knowledge and qualitative judgment. Further exploration could combine more investment insights to expand the analysis on investors.

Another possible expansion would be to include archived unicorn lists of previous years. This would reveal the dynamics and trends of unicorn companies, such as the change in company valuation over time and relationships between the number of exits and market conditions.

View all posts by Xue Wang >