Diabetes is among the most prevalent diseases, impacting millions of Americans each year. It is a serious chronic disease in which individuals lose the ability to effectively regulate levels of glucose in the blood. Complications, such as heart disease, vision loss, lower-limb amputation, kidney disease and infections are associated with  high levels of sugar remaining in the bloodstream for those with diabetes.

Adult-onset diabetes is caused by both genetic and lifestyle factors. Strategies like losing weight, eating healthily, being physically active, and receiving medical treatments can mitigate the harms of this disease in many patients. Patients with pre-diabetes or diabetes early in the disease process may be able to reverse the process of insulin resistance through lifestyle measures. Early diagnosis is, therefore, key to prompting lifestyle changes and more effective treatment, making predictive models for diabetes risk important tools for public and public health officials.

The significance and scale of this problem is also important to recognize. The Centers for Disease Control and Prevention (CDC) has indicated that as of 2018, 34.2 million Americans have diabetes and 88 million have prediabetes. Furthermore, the CDC estimates that 1 in 5 diabetics, and roughly 8 in 10 prediabetics are unaware of their risk. Adult-onset (Type 2) diabetes is the most common form and its prevalence varies by age, education, income, location, race, and other social determinants of health. Much of the burden of the disease falls on those of lower socioeconomic status as well. Diabetes also places a massive burden on the economy; diagnosed diabetes costs of roughly $327 billion dollars annually (1).

About the data set

Every year, the CDC carries out a Behaviour Risk Factor Surveillance System (BRFSS), telephone survey of around 400,000 Americans on health related behaviorss, chronic health conditions and the use of preventative services. For this project, the dataset available for the year 2015 was used, with 21 variables and 253,680 survey results from the telephone survey analyzed for their association with pre-diabetes and diabetes.

The dataset examines the following variables

The questionaire  yielded 253,680 responses that I examined to determine how many had diabetes or pre-diabetes. This demonstrated that 13.9% of respondents were diabetic with a further 1.8% being pre-diabetic. However, the diagnosis of pre-diabetes is dependent on the level of testing carried out within healthcare. It is likely to be unrecognized in a large proportion of the population because it is entirely asymptomatic. Consequently, those that are tested are likely to be a self-selected, which raises the problem of a  potentially biased population sample and further analysis on whether this is reflective of the true incidence of pre-diabetes within the population would need to be performed to ensure the validity of these survey results. 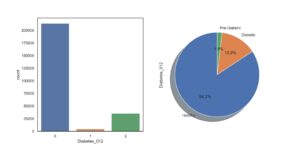 Next I examined the distribution of each variable using histograms. This demonstrated that most variables had been converted into catagorical types – with the exception of BMI. This is likely to lead to over-simplification of modelling of the data  for predicting diabetes. Several of these variables would have yieleded more granular data if they had been kept as continuous variables such as age, income, blood pressure, cholesterol. Similarly the status of whether an individual eats fruits or vegetables has been made binary when the amount they eat is also likely to have significance on the risk of developing diabetes. This visualization enables an assessor to gauge the limitations of the data set and also potentially identify outliers in the data. There was no missing data within the dataset.

Correlation between the variables 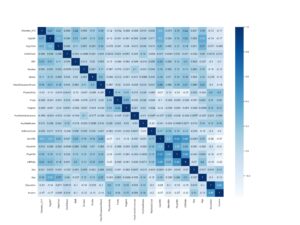 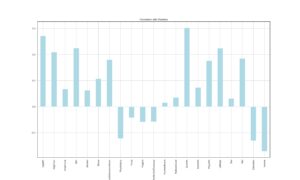 I examined the relationship of BMI with diabetes. Initially, I examined this using a boxplot. Although this demonstrated a step-wise increase in BMI in pre-diabetics and diabetics,  due to outliers, it did not allow granular detail to be analyzed.  Therefore, I went on to examine the association of diabetes with BMI with a stacked bar-graph. This demonstrates a clear relationship between increasing BMI until a BMI of around 70. After this, the relationship is not demonstrated, likely as a result of very few patients within these cateagories (data now shown). 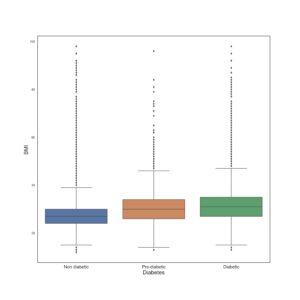 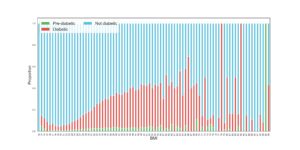 Next, I examined the relationsip of age and diabetes. In the stacked bar-graph below, you can clearly see a relationship between both pre-diabetes and diabetes with increasing age bands. 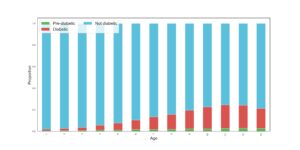 Next I examined lifestyle factors, such as diet and smoking, and their association with diabetes. This demonstrates no association with smoking. However, an association was observed with lower incidence of eating fruit/vegetables and lower physical activity and the development of diabetes as well as with drinking excess alcohol. 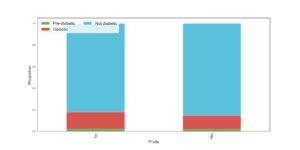 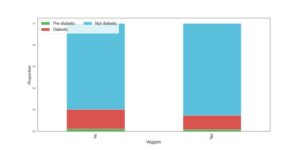 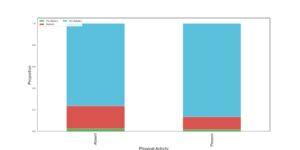 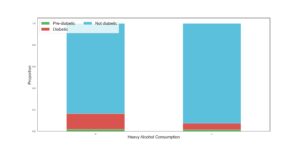 As shown in the pearsons correlation above, socioeconomic factors such as higher income and higher educational attainment were negatively associated with diabetes. As these associations are likely to be lifestyle related, I went on to examine the relationship between income and lifestyle factors such as physical activity, excess alcohol consumption and diet within these groups to understand the relationship further. Higher income was associated with higher vegetable and fruit consumption as well as increased activity. Alcohol was not as strongly correlated with higher income although a weak association was seen. Better general and physical health were also positively correlated with higher income. These lifestyle factors may partially explain reduced rates of diabetes within the higher income group population. 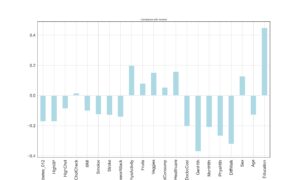 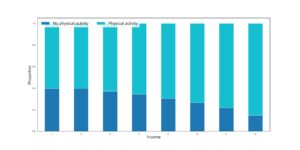 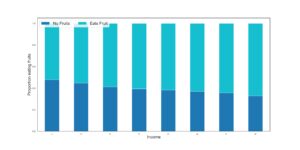 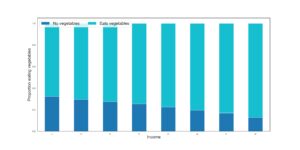 I have shown a clear correlation between increasing body mass index and diabetes. While it may be easy to draw conclusions in terms of correlation and causation, the clear inter-relationship between several of these factors makes the interpretation of this data more challenging. It is important to remember that correlation does not equate to causation and that further analysis using other methods outside of telephone surveys would be required in order to use data in public health measures to improve rates of diabetes or its identification in the general population.

Resources for the data

View all posts by Vallari Shah >