Data Analysis of Gender Inequality in the Movie Industry

Over the past 100 years, women's participation in the workforce has drastically changed based on data. In 1920, women made up only 20% of the labor force, but changes in laws and women's rights led to an increase in women not only joining but also staying in the workforce. This increase peaked in 1999 when women made up 60% of the labor force and has since decreased down to 47%.

While women's participation in the workforce has generally improved over time, certain professions and fields are still far behind others in terms of gender representation. For example, only 33% of workers in the tech sector are female, and only 25.5% of architects are female. Likewise, women are very underrepresented in the movie industry; from actors, to directors, to writers, all of these professions are male-dominated. To study this underrepresentation, I utilized Exploratory Data Analysis (EDA) techniques in Python to assess gender inequality across professions, movie genres, budgets, and time.

The main data set was a movies data set from Kaggle, which contained over three decades of movie data starting from 1980. The data was scraped from IMDb and contained 7,512 total movies, each listed with their general information. In addition to this, three other data sets were obtained from GitHub under a Hollywood Gender Data repository: one table for actors, one for directors, and one for writers.

Each of these tables listed movie titles and general movie information, along with the name of the person holding the respective profession for each table, and additionally that person's gender (disclaimer: the gender data was listed in terms of the gender binary, thus all entries are strictly listed as either male or female, and none as nonbinary, trans, or any other gender identity). 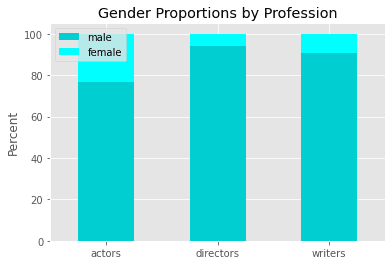 I found that 77% of films from 1980-2020 had a male lead actor, 94% had a male director, and 91% had a male writer. We can clearly see that all three of these roles are male-dominated, with directors holding the highest rate of gender inequality.

Now that I knew that all three professions were skewed in favor of men, I wanted to see if this imbalance had changed or improved over time. I started out by looking at the change over time for the gender of lead actors. 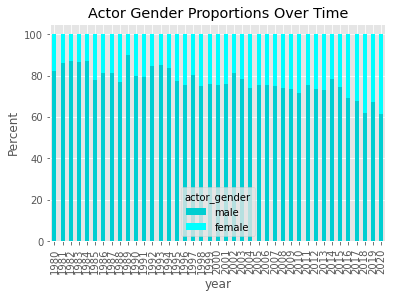 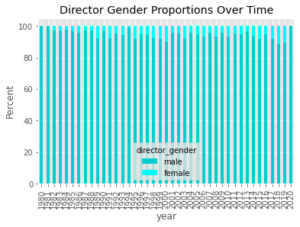 Disclaimer: In 2020, only 7 movies in the data set listed the director's gender.

Next I analyzed the change over time for directors. While there is an increase in female directors over time, this increase is much smaller than it was for lead actors. Since the change in gender proportions is much more staggered than it was in the previous example, I decided to compare the percentage of women in the role across the first and last decades in the bar graph instead of the individual years. In the 1980's, only 3% of movies were directed by women. This rate increased marginally to 7% in the 2010's. 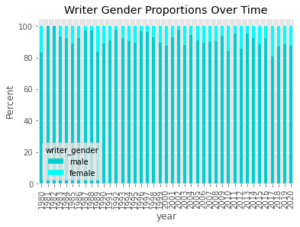 Lastly, I analyzed the change over time in gender proportions for writers. Just like for directors, there is an increase over time, but this increase is small and also very staggered. In the 1980's, 7% of movies were written by women, and this percentage only increases to 11% in the 2010's. Overall, all three professions saw an increase in women in each role over time, but that increase was much more substantial for actors than it was for directors or writers.

Data for Gender by Genre

Disclaimer: No Family or Western movies in the data set contained the gender of the writer

As you can see in the graphs above, gender ratios are not always consistent across genre. This is most clearly seen in the actors bar graph, where some genres are almost entirely male-led, while others are more evenly split. However, none of the genres even come close to achieving this for directors or writers. This leads to some inconsistency across professions. For example, Family movies are almost entirely directed by men, but Family is the only movie genre where the majority of lead actors are women. Other genres are consistently male-dominated, like Western movies.

The next topic I decided to investigate was whether the gender of the lead actor, director, or writer affects the budget of the movie. While I knew I wouldn't be able to get concrete proof that having women work on a film would automatically result in a lower budget, I chose to look at mean budgets by gender and profession over time and see if there was any noticeable trend.

While there are a few small gaps in the graphs due to missing data, the general trend is clear: male-led movies tend to be given higher budgets than female-led movies across all three professions. Aside from 2020, where the large spike in budget is likely due to sparse data, we can see that over time, male-led movies have seen a steady increase in budget. Female-led movies, however, see much more fluctuation, occasionally spiking up enough to marginally surpass male-led movies. This is likely because the majority of movies are male-led, and thus a larger sample would lead to a more constant trend.

To summarize my findings from the EDA shown above, I determined that the movie industry is not egalitarian, since the roles of lead actor, director, and writer are much more often filled by men than women. This gender imbalance is most notably seen in directors, where only 6% of movies from 1980 to 2020 were directed by women.

However, there has been an overall increase in women in these roles over time, although for directors and writers, this increase is very small. When it comes to movie genre, gender ratios will vary based on the genre and the profession; we see the most notable variance in the gender of lead actors. Additionally, movies with female lead actresses, directors, and writers all tend to have lower budgets than their male counterparts. Lastly, movies directed or written by women have a female lead actress more often than those directed or written by men.

Limitations and Future Analysis of Data