The dataset used in this project is from the official website of Chicago data portal. I selected all the Chicago taxi trips in 2016 to see what information can we get from the data, for example, how centralized is Chicago, and where are the places for taxi drivers to have higher possibility to pick up next ride. What should be mentioned in here is this dataset does not include the taxi trips from ride-sharing companies such as Lyft, Uber, etc

The data is huge, there are roughly around 20 million taxi trips in Chicago in 2016. I made a graph showed the number of taxi trips per second through the whole year of 2016. It seems the number of taxi trips provided by the conventional cab companies dropped through the second half year of 2016. The cause of the market share dropping could be related to the market expansion of those taxi ride-sharing companies, which made the conventional cab companies in the city of Chicago harder and harder to make the profit. 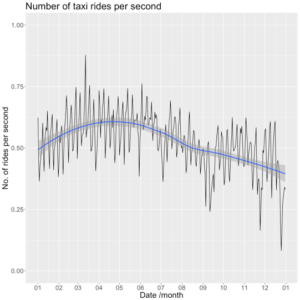 Well, with no doubt that most of the cities in the world are centralized to some extent. For the city of Chicago, the taxi trip analysis provided us this information from another perspective. What we have in here is a bunch of contour maps of taxi trips in all the community areas in each day of the week, they also have the information of whether the rides were at daytime or at night, and whether they were pickup or dropoff rides in that certain community area. 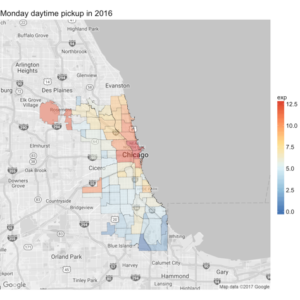 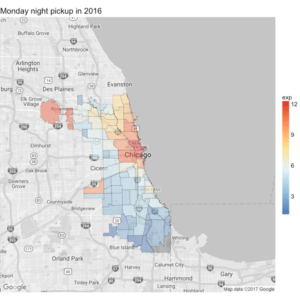 In here I only put the contour results of Monday pickups at daytime and night. The readers are kindly referred to the shiny app of this project to see more about the result analysis. In fact, there aren’t too much different between the pickups and dropoffs distribution in the city of Chicago on different days. There are always much more taxi pickups and dropoffs in those community areas in the city center and the two airports (ORD, MDW). The number of taxi trips at night from both the airports is higher than at daytime, this is due to the limited choices of public transportation from the airports to the city at night.

There are always higher pickups than dropoffs in the airports

It would be always interesting for taxi drivers to know where could potentially pick up next rides. Well, in here I provided a group of graphs showing the ratio between the pickups and dropoffs in different days, time, and community areas. In the daytime, the ratio is roughly evenly distributed through the city except for those less taxi activity areas. However, there are much more pickups than dropoffs in the airports comparing with other areas in the city. Well, it would be a good option for taxi drivers to seek next ride in the airports if the dropoff area of their last ride is not far away from the airport, especially at night. 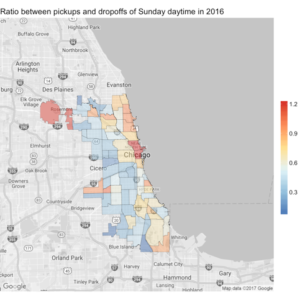 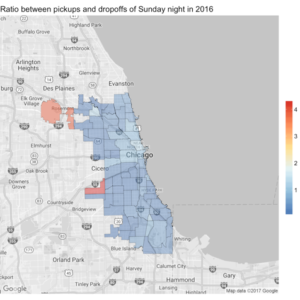 This is a very interesting phenomenon in this analysis. In our contour map, we can see the mean fare you pay per minute for your trip is higher if your destination is away from the city center. In fact, the fare per minute in here is calculated from the fare divided by the trip time. The cause of this is mainly due to the trip fare is more related to the trip range. The longer trip denotes higher fare. However, the drivers can always drive faster without encountering the traffic issues in the downtown area. So the trip times are not as long as what we expected. In this case, the mean fare per minute of trips to the community areas away from the downtown areas always seems higher. For example, as shown in this graph, the fare per minute of trips going to the far south of the city of Chicago is 50% higher than the trips to the downtown areas. 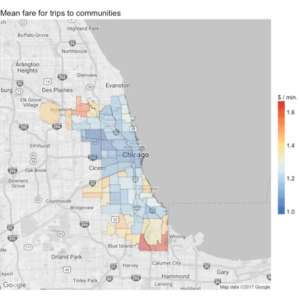 It’s always interesting to analyze the trip ranges of the taxi rides. I did an analysis on trip range distribution through different community areas. It seems that more of the trips in the city center or downtown areas are short trips. The trips going to and from these areas are shorter, compared to those trips in further areas. For example, the trip ranges of taxi rides to and from the airports or far south of Chicago are nearly 5 times longer than the range of rides in downtown areas. 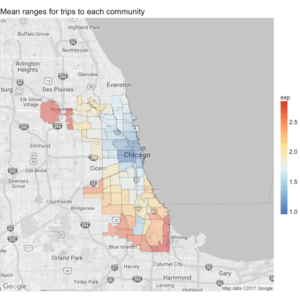 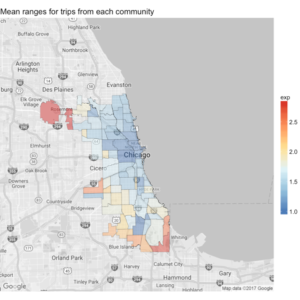 Yiming is a data science fellow in NYC data science academy. He is always passionate about machine learning, data visualization, and coding reusable scripts. He received his Ph.D. degree in Electrical Engineering from the Université de Technologie Belfort-Montbéliard,...
View all posts by Yiming Wu >

Kathleen Martin November 8, 2017
Since the admin of this site is working, no doubt very quickly it will be well-known, due to its quality contents.