As a student who is very passionate about wildlife conservation, I wanted to visualize how fish populations have changed over recent years. I found the National Oceanic and Atmospheric Administration (NOAA) conducts a Coral Reef Monitoring Program, which records data from coral reef sites every two years. The particular dataset I chose to work with specifically surveys the coral reef tract of the Florida Keys.

This dataset contains observations taken in 2014 and 2016 of coral reef fish communities located in the Florida Keys Reef Tract. Each observation records many attributes of the fish seen and the habitat where it was found. Measurement stations were divided into 3 main regions: Dry Tortugas, Key West to Miami, and Miami to North Martin County. Within these regions, 20 different coral habitat types and 406 different fish species were observed. I have chosen a few attributes of this dataset to explore, including region, habitat type, depth of the observation, and number of fish seen during the observation. My goal was to find changes in these attributes from 2014 to 2016, with expectations of less fish seen overall and more fish by percent of total found at greater depths in 2016 due to climate change. 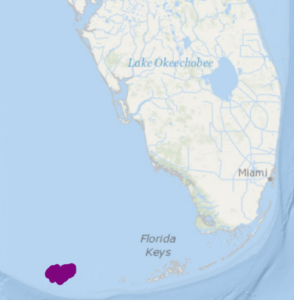 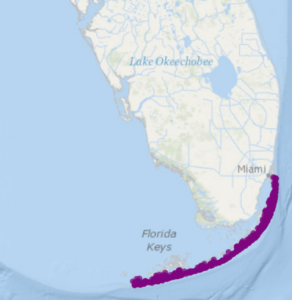 Measurement stations located in the Key West to Miami region. 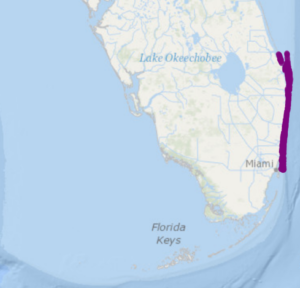 Measurement stations located in the Miami to North Martin region. 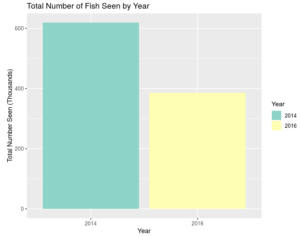 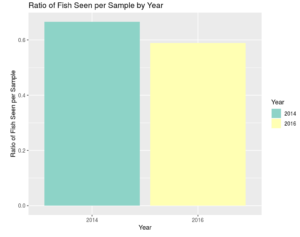 Since there were 406 species in this dataset, I decided to focus only on the 12 most common species in each region and see if any of them contributed to the overall decrease in fish seen per observation.

These graphs show the number seen of the 12 most common fish in each region, and then by year. A few interesting things are seen here. In the Dry Tortugas region, the number of masked goby seen is 150,000 more than any of the other most common fish. This same trend does not occur in the other two regions, and we also see a very drastic drop in number of masked goby seen from 2014 to 2016. I assumed at first that this must have been an input error in the data, and I would perhaps find one or two observations with an extremely high number seen in comparison to the other masked goby observations. However, this was not the case. The number of masked goby seen per observation follows a steady downward trend in 2014 and even the highest number seen for one observation seemed to be recorded accurately. In further work I would like to research this more, as just the decrease in masked goby from 2014 to 2016 accounts for a very large portion of the total decrease in fish seen. If possible, I'd like to try to find out what the population of masked goby in this region looked like prior to the start of this survey in 2014, to determine if there was an initial spike in this species, rather than such high numbers seen per observation being the norm, and what may have caused it.

Last, I wanted to look for a change in the depths that observations were taken by species. I had made an initial guess that with rising water temperatures, each species might be more commonly found at greater depths in 2016 than in 2014 so that they could remain at a constant water temperature. However, I ran into an issue with the data when exploring this question.

When looking just at number of fish seen per by habitat per year, we see a massive decrease for some of the habitats from 2014 to 2016. At first glance, this could appear to support my initial guess that fish would be more commonly found at greater depths in 2016, and therefore leaving behind certain habitat types found at lesser depths. However, I found a significant change in the pattern of observations taken from 2014 to 2016.

Thank you for taking the time to read about my analysis of the National Coral Reef Monitoring Program: Assessment of coral reef fish communities in the Florida Reef Tract! If you would like to see my corresponding interactive web app, please visit the link below!