There are thousands of flight delays in the United States on a daily basis. Direct Aircraft Operating Cost is $74.2/min. Flight delays cost airlines billions of dollars every year. It is important for airlines to minimize flight delays. I have created an interactive visualization app to help airline operations better visualize fight delays.

I used the 2018 flight delay data from Kaggle.com. The original dataset size for 2018 flights is more than 7 million rows. Because the free version of Shiny App has a capacity limitation, I created a subset of the data to include only flights from American airline and Delta Airlines. After the subsetting, the new dataset size includes 310,983 observations.

Carrier Delay: Delay caused by a carrier such as an aircraft cleaning, aircraft damage, and baggage loading.

Security Delay: Delay due security such as the evacuation of terminal and re-boarding due to security breach. 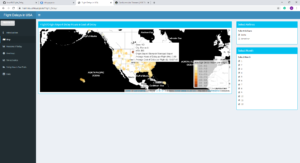 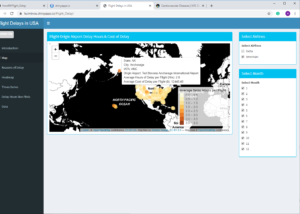 The delay caused by NAS is similar between the two airlines.

For both Delta and American Airlines, there is almost no delay caused by security.

In major airports such as BOS, LGA, ORD, passengers spend more time waiting for flight due to late aircraft delay compared to spending time for other reasons.

It is interesting that at JFK airport, flights are delayed longer due to National Aviation System compare to other flight delay reasons. 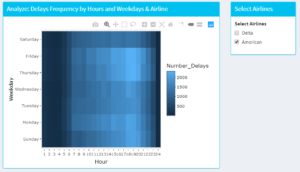 AA flights are delayed more often on Monday and Friday compared to any other days of the week.

There are more flight delays occurring from 6AM to 12PM compared to flight delays from 12PM to 6AM. It makes sense because airlines only schedule late-night flights in a few popular traveling destinations. 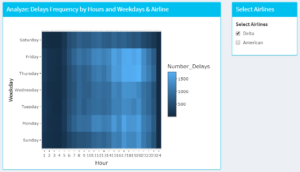 For Delta Airlines, flights are often delayed from 3PM to 9PM on Thursday and Friday and 5PM and 8PM on Monday.

For both airlines, Monday and Friday are the two days with most flight delays. Saturday is the day with the least flight delays compared to the other days of the week. 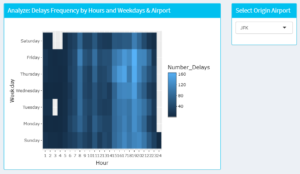 For JFK airport, American and Delta flights are frequently delayed at 5-8 PM on Friday,  4-6PM and 7-9PM on Thursday, 5-8PM on Wednesday, 7PM on Tuesday, 7PM on Monday, and 8PM on Sunday.

JFK Airport is not busy from 12AM to 6AM for American and Delta Airlines.

For American Airline, there are not many flight delays from January to April. This may be due to the fact that people tend to travel less in winter.

Flight delay frequency increases from April to August and peaks on Aug 13. There are a lot of flight delays from May to August. This is possibly due to the fact that people start to travel more when the weather gets nicer, and families may plan more travel when students are off school. The flight delays occur less after students are back to school in September.

However, delays increase around holidays such as Columbus Day in October, Thanksgiving in November, and Christmas in December.

The second peak of flight delays is on Dec 28. This is probably due to people traveling for the New Year.

For American Airlines and Delta Airlines, the median of flight delay for all months are similar. It is around 0.5 to 0.8 hours.

In each day of the week, American and Delta Airlines often have flight delays for around .65 hours on average.

If you are interested to see the code, please view my Github:

Huimin Ou is NYC Data Science Fellow with a Bachelor's Degree in Industrial Engineering from University of Wisconsin-Madison. Before coming to NYCDSA, Huimin is an industrial engineer with experience in business data analytics, process improvement and project management....
View all posts by Huimin Ou >