Can we measure the well-being of a society? How does that compare to our personal perception? While a better understanding of people’s well-being is important to developing better policies, merging measured data and the individual experience in one coherent picture, remains challenging. In this project, we will try to describe this problem, by exploring the so called Better Life Index.

About the Better Life Index

The Better Life Index (BLI) is the result of an initiative started in 2011 by the Organization for Economic Co-operation and Development (OECD), aimed at identifying and measuring the essential parameters for well-being of societies. The index is built upon 11 topics, addressing the well being in terms of material living conditions (housing, income, jobs) and quality of life (community, education, environment, governance, health, life satisfaction, safety and work-life balance).  The relative weights of the topics is measured by means of an online survey open to citizens of the OECD countries. While BLI users are contributing to the survey by choosing which indicators matter the most in their lives, the index is meant as interactive tool to involve citizens in the debate on measuring the well-being in their country.

Comparative analysis of the aggregated indicators for well-being

The OECD better life dataset is organized in 11 aggregated indicators, 24 indicators and 38 countries, including Brazil, Russia and South Africa in addition to the OECD members. Data are gathered from several sources, including National Accounts, United Nations Statistics, National Statistics Offices, the World Health Organization (WHO) and Gallup. Each aggregated indicator is calculated on the basis of one to four indicators, averaged with equal weights and accounting for gender and income inequalities. As the indicators are expressed in different units (currency, time, percentage, etc), the values are normalized as:

While most of the indicators come from official sources such as OECD, United Nations Statistics and National Statistics Offices (referred here as "indirect indicators"), four indicators are based on public opinion polls and are meant to represent the "subjective well being":

In the following, these will be referred to as "direct indicators". Notice that Life satisfaction and Quality of the support network (Community) take an important role, as they are used as independent topics, while the others are aggregated in Health and Safety, respectively.

Having defined the 11 topics for the BLI, we can compare each indicator across the OECD countries, as shown in the gallery below. For each picture, the colormap ranges between 0 (deep blue) and 100 (red), where a high value refers to a positive performance of the country for the given topic. 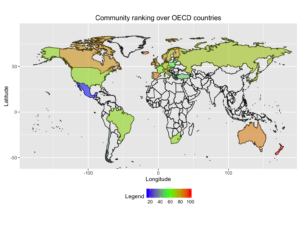 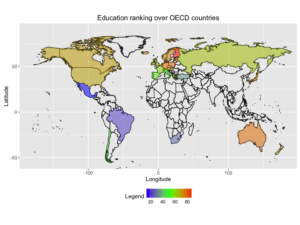 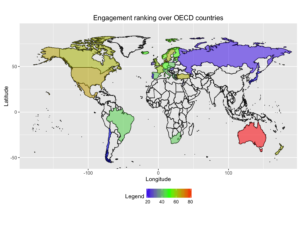 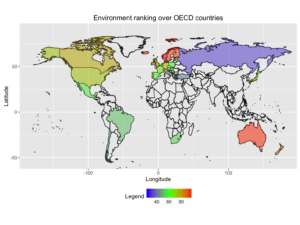 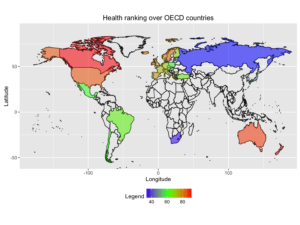 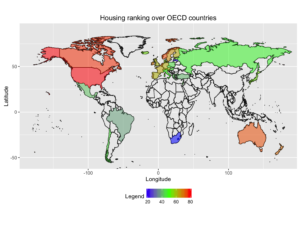 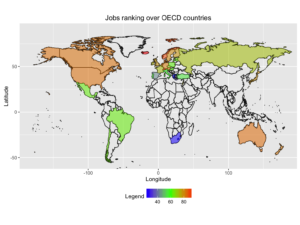 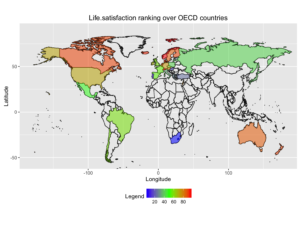 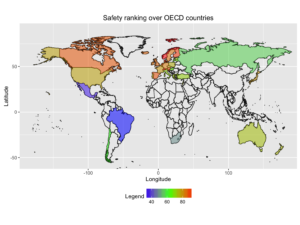 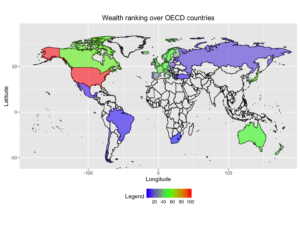 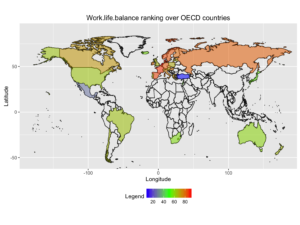 The eleven maps provide a good representation of the complexity of the BLI: even the countries (such as USA, Norway, etc) performing consistently better than the average, in particular in relation to material well-being, the index underlines the need for improvement in other areas such as job security, air quality, housing affordability, and work‑life balance.

Let's take a closer look at the direct indicators listed in the previous section. The first three are published by Gallup World Poll while Self reported health is provided by the WHO. As shown in figure 2,  the density plot for all four indicators is left skewed suggesting a positive bias in the data. This appears particularly clear for Self reported health and Quality of support network. Furthermore, the four indicators seem to be correlated, in particular when they share the same source (see figure 3). 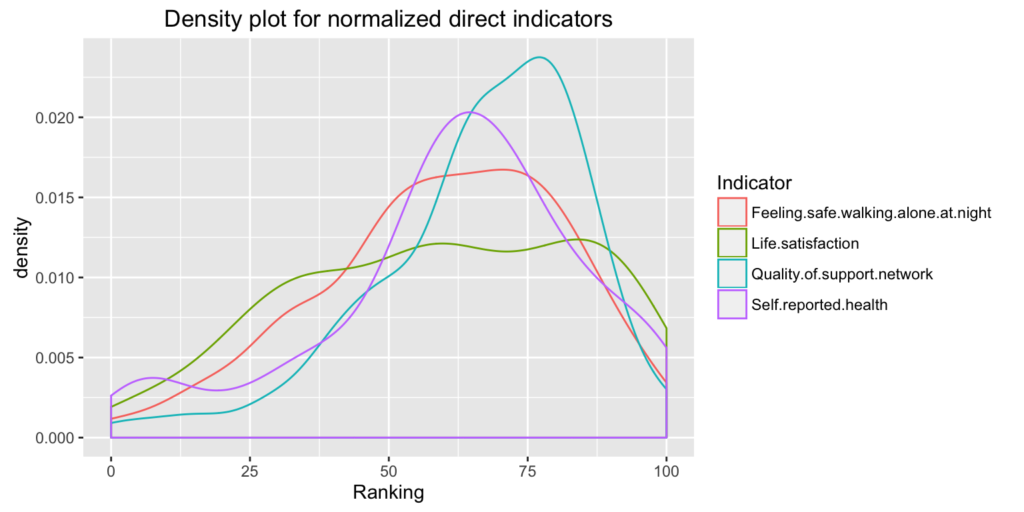 Figure 2: Density plot for normalized direct indicators. The ranking was calculated using a "Min-Max" normalization described in the previous section. 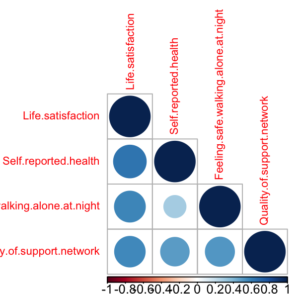 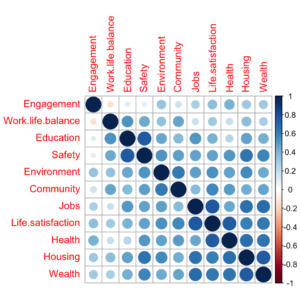 Let's focus on Safety and Health. The first is defined as the average of the normalized Homicide rate and Feeling safe when walking alone at night; the second as the average of the normalized Life expectancy and Self-reported health. In both cases, the direct and indirect indicators are expected to correlate well (ex. a country with a lower homicide rate is expected to have a better perception of safety). While this might seem intuitive, the scatter plot in fig 5 shows a rather chaotic trend. An explanation for such behavior is found in the "Min-Max" normalization chosen for the aggregated indicators. 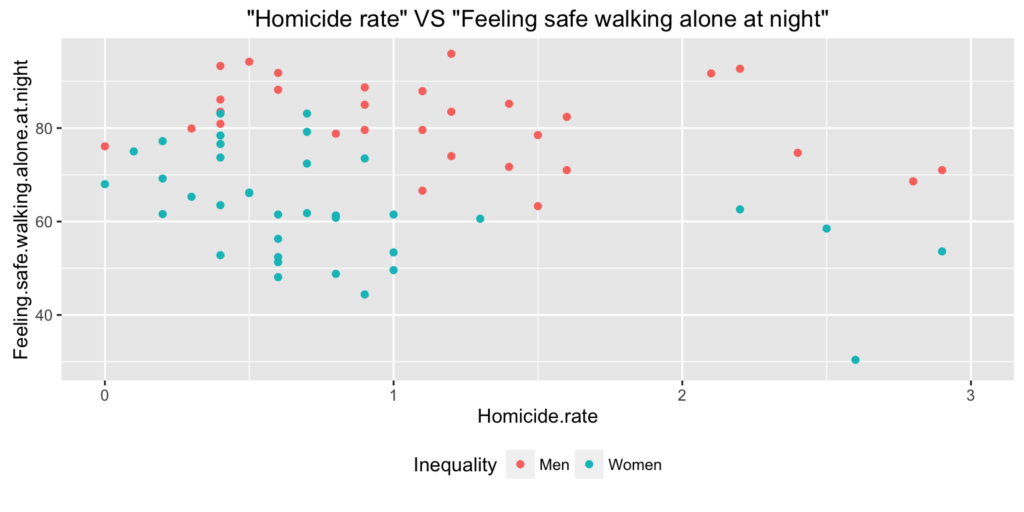 The box plots in figure 6 show that both indirect indicators contain a number of  "outlying countries", namely countries with significantly lower values. The normalization emphasizes a few, low ranking countries, while most data points are "compressed" in a narrow range. 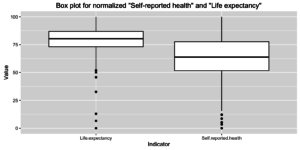 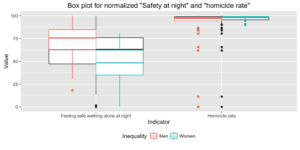 Fig 6: Box plot for Health and Safety, showing the data distribution of the normalized indicators before aggregation. Notice the large number of outliers for Life expectancy and Homicide rate. The second box plot shows the influence of gender in the perception for safety.

Conclusion: Is "perception" adding value to the "big picture"?

The Better Life Index is an interesting attempt to capture the key parameters for economical, social and environmental well being, integrating the "measure" and the public "perception" of life quality. The analysis presented in this post focused on such integration, raising a few questions on the relevance of the data from public opinion polls and on the methodology used to produce the Index.

As the general perception on well being is "localized" in a given geographical, social and cultural context, it is a relative measure rather than an absolute parameter. As such, it was found not to correlate necessarily well with "measured" indicators for the same topic, even when a correlation is to be expected (see Safety perception VS Homicide rate). Furthermore, we noticed that the density distribution and the correlation matrix of the direct indicators suggest an "optimistic" bias and possibly a redundancy.
These arguments, along with the lack of an appropriate weighting, may limit the value of the direct indicators Life Satisfaction and Quality of the support network, and the reliability of the aggregated indicators Safety and Health.

This post was contributed by Diego De Lazzari. He is currently in the NYC Data Science Academy 12 week full time Data Science Bootcamp program taking place between July 5th to September 23rd, 2016. This post is based on his first project - R Visualization (due on 2nd week of the program). The R code can be found on GitHub.