If Warren Buffet were stuck on a deserted island and could only have access to one economic indicator, he said he would choose rail carloads (he owns Burlington Northern, one of the largest railroads in the US). While rails only constitute a mid-single-digit percentage of the US transportation spend, the amount of carloads moved by rails represent an excellent indicator of the US economy because they move such diverse types of freight from coal to grain to automobiles. The frequency of data availability also makes it attractive since class 1 rails (largest railroads in the US) are required to report weekly how many carloads they move each week.

The chart below shows that ISM is a great leading indicator of US GDP.

Given the importance of rails to the US economy, it is no surprise that the rail stocks have a wide investor base. The goal of this project is to identify trading opportunities based on the relationship between carloads and rail stock prices under different macro environments. Essentially, this uses a web app to automate the type of analysis hedge funds typically perform on the rails.

The analyses performed included the following:

App users can choose which rail to analyze and have the option to utilize a moving average to smooth out the volatile weekly carload data. For deriving conclusions below, the four week moving average was used. Lastly, stock prices relative to IYT and XLI are optional since stock movement relative to S&P 500 is more important (the user has the choice to show or hide IYT and XLI analyses).

It’s important to note that rails generally outperform the market (represented by S&P 500) over time as illustrated by the chart below. The chart only represents the last few years, though in fact, the rails have outperformed the S&P 500 16 out of the past 17 years. This is because Class 1 rails are essentially duopolies (2 in Canada, 2 in the Eastern US, and 2 in the Western US) with great pricing power, consistent margin expansion, and solid free cash flow generation. That said, this project will still aid in picking the best time to buy the rails and narrow down which one has the highest chance of becoming a successful investment.

The first big picture conclusion that can be drawn is that the rail stocks are more likely to work when ISM is >= 50, which makes sense since they will move less carloads and make less money when ISM is below 50. The chart below shows that UNP stock rises more in the green region, which is when ISM >= 50. This is generally true for other rails as well. 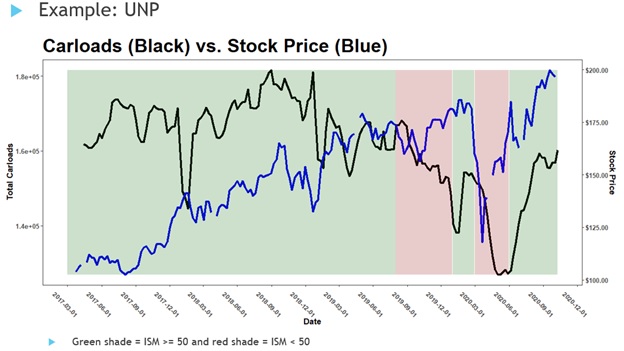 Lastly, on an individual rail basis, CSX appears to be the best investment. CSX carloads are almost back to 2017-2018 levels, and the stock has recovered back to the levels from 2017-2018 as well but the performance vs. S&P 500 has lagged as shown below.

Just to contrast CSX’s value vs. other rails, CP’s charts are included below. CP’s carloads haven’t recovered yet the stock has made new highs both in isolation and relative to S&P 500.

Final caveat is that while carloads explain the majority of rail stock price movement in the long run, other exogenous factors could drive the stock prices in the near term.