Refugees and Asylees of Turkey 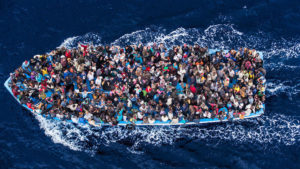 "4/Hundreds of refugees and migrants aboard a fishing boat are pictured moments before being rescued by the Italian Navy as part of their Mare Nostrum operation in June 2014. Among recent and highly visible consequences of conflicts around the world, and the suffering they have caused, has been a dramatic growth in the number of refugees seeking safety by undertaking dangerous sea journeys, including on the Mediterranean."
The Italian Coastguard / Massimo Sestini

As a person who has interests in international politics and having a Turkish background, I did analysis on the refugees data was provided by UNHCR, the UN Refugee Agency.

The website has a very easy API to navigate and chose the specific columns to work. My preference was collecting all refugees and asylum seekers data of Turkey from 2000 to 2016. Besides the refugees and asylum seekers, the original data also includes Returned refugees, Internally displaced persons (IDPs), Returned IDPs, Stateless persons, Others of concern worldwide since 1951.

What does refugee and asylum seeker mean?

By definition of UNHCR, refugees include individuals recognized under the 1951 Convention relating to the Status of Refugees, asylum-seekers are individuals who have sought international protection and whose claims for refugee status have not yet been determined, irrespective of when they may have been lodged, also known as aylees.

Although the data is given for all countries, I only extracted the refugees and asylees of Turkey and the demographics of the refugees in Turkey.  In this dataset 'Refugees in Turkey' are those who have different origin countries and have same destination country as Turkey, 'Refugees from Turkey' are those who have same origin country as Turkey and have different destination countries, and 'Asylees from Turkey' have same credentials as refugees from Turkey with the difference of their status has not yet been awarded as refugees.

In the interactive app there are three maps represent 'Refugees in Turkey' by their origins, 'Refugees from Turkey' by their destinations and the asylees by their destination countries alongside with their volume. There is also a year slider that helps to see the change of the population over the years. Moreover, there is a stacked time series graph that shows the change in refugees population over the years. It is also possible to breakdown the demography by selecting a specific age and gender group.

In 'Refugees in Turkey' map, it's seen that until the beginning of 2001 there are not many people migrated to Turkey as refugees, however, after 2002, thousands of Iraqians have fled to Turkey as a consequence of the war took place in Iraq. The Iraqian refugees population have increasingly continued and it reached at 125,740 in 2016. Until 2011 Iraqians have the majority of population followed by Somalians and Afghans. After 2012 Iraqians were no longer the majority, they were replaced with Syrian refugees with increase from 83 to 248,549. Unlike any other countries in the region or world, Turkey has accepted 7,719,521 Syrians as refugees and granted some of them with citizenship.

Based on the visualizations it's seen that Turkish refugees' most preferred destination country is Germany and interestingly it's followed by Iraq. There are two main reasons why Germany is the most favorable. First, currently there are more than 10 million Turkish live in Germany as a result of the 'guest workers' imported from Turkey after World War 2. Therefore, Germany is more convenient then any other European countries for Turks. The economy and the distance to Turkey also makes Germany more attractive for Turkish people than other countries in the region. Following this further, it's not surprise to see the number of asylees in Germany is also is the highest as a results. 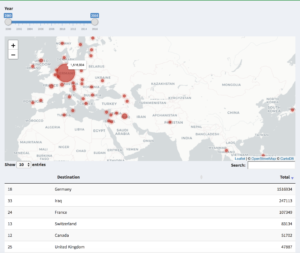 According to the demographic graph, at any age group there are many male than there are female. It's fair to make an assumption that female refugees were less lucky while they left their origin country. In fact,
there are some studies shown that usually the man of the household would leave the battle zone and settle down at the destination country first then bring his family later.

To conclude, refugees usually flee to the countries relatively close to their origin country and it's important that the destination country has a good policy towards refugees rights. People tend to move with small groups which usually consist of it's easier to leave the country alone than the entire family because a single person could handle better the challenging life ahead is the new country.

View all posts by BIRCAN BUYUKDAG >