US media property trends on Facebooks

We all know how Facebook has been a very important platform for businesses in most of the industries. The face especially applies to media industry because Facebook possesses over a billion users and is where people come to find information regardless of what type. A number of businesses put their ads on Facebook in many different forms and methods. That's where media companies come in to play their social media marketing. In this project, I picked out 6 US major News media companies and their posts to analyze news trends and each companies position in Facebook marketing.

The 6 Media companies are ABC, BBC, CNN, FOX, HUFFPOST, and NBC, and I obtained their activity data from dataword. The metric I used to analyze is the number of 'Likes' people clicked on as well as other 'feelings' icons and 'share' button. The data was  collected from 2012 to 2016 and included 6,000+ posts information in 21 features. Also, the analysis is included in my 'shinyapp' which I created not only to share the analysis but to help people find information such as post information and the post links.

The first analysis in this project is the 'likes' analysis, comparing each media's number of likes year by year. This analysis depicted in a graph below tells that FOX shows the steady and highest growth remarkably that other 5 medias. It also tells that BBC and CNN started sharing posts on Facebook from 2014 and have been reaching a good number of likes.

Then I split by media on a bar chart to help each one see the progress year by year.

I also wanted to display all of the best post from each media company posted on the Facebook.  Each section on the page has the post title, number of likes it was hit, name of media, and a link.

Also I used word-cloud analysis method to see which words were used frequently in all posts by each media. The bolder the words are, the more often it appeared in the posts. For example, in ABC posts, the words 'first', and 'one' were used most often, then, obama, old, year, then trump, take, and so on. 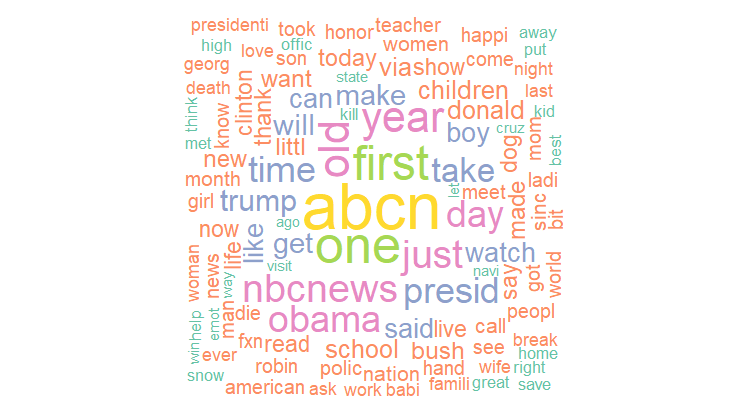 Lastly, I wanted to share a data table which people can use as a news library where they can sort out posts by specific words, year, media, type of posts, and etc. They can also check out the posts by likes count and see popular news left in the history. Each of the posts includes direct link.

I'm looking forward to creating more and projects and share my analysis. Please check out my future updates.

Thank you for reading!