In the United States police kill civilians at an alarmingly high rate. When compared with data of the US to other wealthy countries, US police officers kill civilians at a rate over three times greater than the next highest country [1]. Black Lives Matter protests sparked by police killings called for defunding the police and police reform, but ultimately resulted in little to no change. This is in part due to a lack of clarity in what changes need to be made to reduce the number of fatal encounters with police. To address this issue I have analyzed a comprehensive dataset of police-related deaths that includes information on deaths since the year 2000 [2].

In light of recent protests around police reform, there is clearly significant interest in reducing the number of police-related deaths, but who are the stakeholders who can benefit from addressing this issue? Citizens who interact with the police would benefit by experiencing a reduced level of fear associated with their interactions. Police departments and police training companies would also benefit through improved interactions and reduced risk.

Local and State governing bodies wishing to reduce this number would benefit from being better informed by knowing what types of further police training to allocate funds to and what alternate services could be funded. They could better ascertain how to reroute 911 calls to organizations other than the police department who may be better equipped to handle certain situations.

FatalEncounters.org maintains a comprehensive dataset of police-related deaths that includes information on deaths since the year 2000. It includes over 30,000 data-points with 36 attributes gathered by a team of volunteers and researchers using media records and police reports. This dataset includes all deaths that occur when police are present whether police are responsible or not. One caveat of this dataset is that it could be undercounted due to police chases not being reported in the media. Also, since police control the narrative delivered to the media, these reports are inevitably biased toward the perspective of the police.

As of October 2021 this dataset had over 30,000 entries. It consisted of predominantly categorical variables with a large number of unique entries, many of which were redundant. It required a moderate amount of cleaning with many missing values and a large number of temporary or redundant columns. 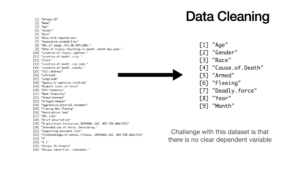 A big challenge with this dataset was that there was no clear dependent variable for use in training models. 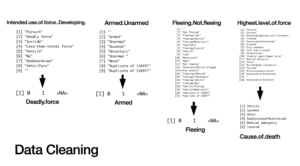 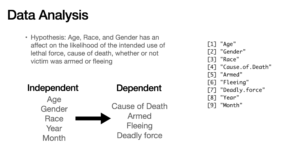 In addressing this issue, we formulated the hypothesis that age, race, and gender have an affect on the likelihood of the intended use of lethal force, cause of death, whether or not victim was armed or fleeing. The subsequent data analysis attempts to address this hypothesis. 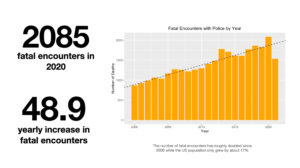 The number of fatal encounters has roughly doubled since 2000 while the US population has only grown by about 17% in the same timeframe. 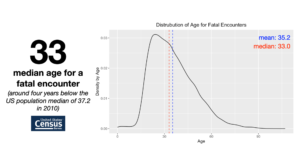 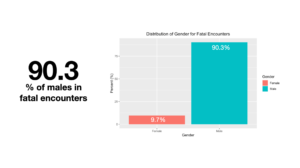 90.3% of fatal encounters with police were male victims. 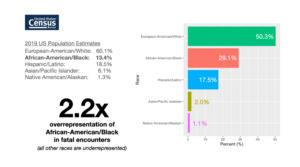 While the percentage of fatal encounters with African-American/Black victims made up only 29.1% of the dataset, this number is over twice as high as would be expected from population estimates alone. The representation of black victims is 2.2x higher than would be expected if there were no racial bias. In contrast, Hispanic/Latino and European-American/White victims are underrepresented in this dataset (0.95x and 0.84x respectively). 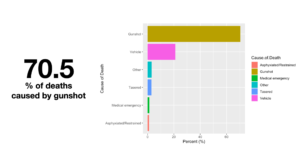 70.5% of deaths were caused by a gunshot wound. Better police training of use in firearms and nonlethal uses of force could reduce this number. 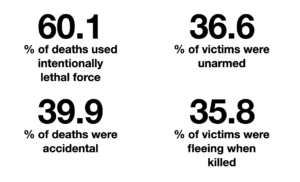 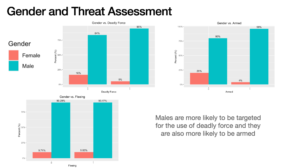 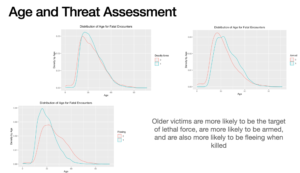 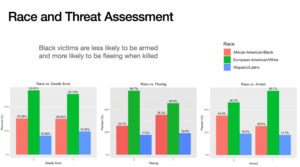 In summary, the number of police related deaths in the United States is increasing at an alarming rate. Fatal encounters with police happen with people who are typically younger than the median US age (33 vs 37), predominantly male (90.3%), and disproportionately black (29.1% vs. 13.4%). The vast majority of these deaths (70.5%) are due to gunshot wounds.

In this project we were able to glimpse some of the factors driving police killings in the US. Better police training in nonlethal means of force, deescalation, and reducing racial bias could help to decrease the number of police killings. Improvements to this project could be made by creating an app to better disseminate our findings, running an ML model, using NLP on text descriptions, and integrating other data sources.

In order to determine which departments and cities are problematic we need to normalize with population data. We also would need to integrate broader police interaction data to employ model building on whether or not an interaction resulted in death. Finally we need to consult with domain experts to clarify and validate our findings.

Karl is a data scientist with nine years of performing technical data analysis and research design in an academic setting. He is highly skilled at communicating complex analytic insights to a general audience. He is currently working to...
View all posts by Karl Lundquist >