What drives the wages in Switzerland?

The goal of my project was to build a shiny app to provide a borad overview of the wages in Switzerland. The topic is of great interest due to several reasons. On the one hand it helps companies to set the right wages. First of all they want to attract the most talented people. For this they need to provide an employee an attractive position with a good salary. Second, it is as well important for talent retention. If a company wants to decrease employees’ turnover one important factor will be the wage settings. Furthermore, the analysis of wages is an important topic for the government and as well the general public to know if there is discrimination for example between male and female or between different nationalities. This can perfectly be analyzed in my app: Link.

There are several important factors which determine your wage. Here is a non-exhaustive list:

In this article I try to determine the effect of these factors on the wages in Switzerland.

In my analysis I use the wage structure survey (LSE). It is a survey which is sent to a representative sample of enterprises by the Swiss Federal Statistical Office in 2018. Participation is mandatory. The survey includes enterprises from all industries of the manufacturing sector and the service sector. There is data on the establishment level such as the size and there is detailed information about individual characteristics of every employee such as the residence status, the occupation, the education level and the wage. The survey captures nearly half of the labor force in Switzerland, namely 1’900’000 workers of the around 4’500’000 employees. It is therefore quite a rich data set and really captures the wages of Swiss people.

How big is the wage difference really between male and female?

Males earn on average 27.6% more than females. Annualy this is a difference of around 21'500 CHF. In nearly every industry males earn more in comparison to females. In some industries this effect is more pronounced. For example, in the financial industry the average male wage is around 14’500 CHF whereas it is 11100 for females. Interesting to see is as well that  there is a wage difference even if we look at the hierarchy levels. One can see that males earn more for every hierarchy level in comparison to females. Again, there are certain industries where this effect is more accentuated than others such as the banking industry. 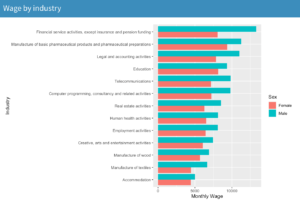 For all the subgroups there is a strong wage increase in the beginning of the career. The wage increases from 25 till 40 nearly every year. Nevertheless, the wage changes become smaller and smaller and stagnate after 40. For people in higher management position this effect remains constant longer in comparison to other groups. But even for this positions the wages stagnate around the age of 45.

The outcome which is seen in these graphs is quite common and mentioned by many personnel managers. Companies are paying young people less in their careers not because they are less productive but rather to motivate them to stay in the company.  In case of an upward-sloping experience-earnings profile, the worker must remain with the firm in order to capture the rewards for good performance in the past.  Older workers in contrast are paid high salaries, not because of superior performance but rather because their high compensation serves to motivate them during the early years of their careers.

The differences between the different sectors in the economy is quite significant. The gap between the highest paying industry and the lowest paying industry amounts to 143 percent. Among the 40 industries the financial sector is paying the highest salaries with an average of around 11’100 CHF. Other high paying sectors are the pharmaceutical sector and the legal and accounting sector with an average of 10’500 CHF CHF and 10'200 CHF respectively. In contrast there are other industries such as “Other personal service activities” or “accommodation” where the salaries are less than half in comparison to the finance sector.

Despite the small size of Swtzerland the wages in the 26 cantons differ quiet substantially. The canton of Geneva (GE) and Zurich (ZH), both homeplaces of strong financial companies such as Credit Suisse, UBS and insurance companies such as Swiss Life, Zurich Versicherung and Swiss Re rank first and fourth in a cantonal ranking. Basel Stadt comes second with its strong pharmaceutical sector with its big pharmaceutical firms Novartis and Roche. It is quite likely that these big companies drive the wages in these regions quiet strongly. This pattern is supported by a finding of Moretti for the US company Apple. He claims for example that Apple employs 12’000 workers in Cupertino, but in total there are at least 60’000 jobs related to Apple. The workers of Apple will go out and spend their salaries on different services in the economy. The high demand for lawyers, doctors, roofers and yoga teachers are likely driven by the giant it firm. It is quiet likely that we see a similar effect in Switzerland, nevertheless on a smaller scale. High paid Swiss pharmaceutical workers will spend their money on different services and drive the wages up locally. In contrast cantons with less strong industries such as the canton of Tessin have lower wages. 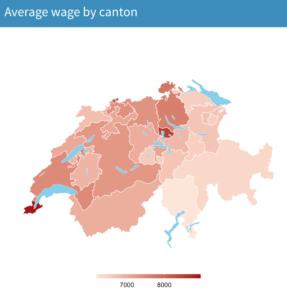 The project provides a broad overview of the certain factors which drive the Swiss wages such as gender, experience, management position, industry and location. Overall, these factors are just a small set of determinants of the final wage of Swiss people. It would be as quite interesting to dig deeper and analyze as well the wages in a certain job type such as data scientist. On top of this it would be interesting to see how the wages developed over time for example for gender or for the different industries. One could see if the wages are structurally declining in sone industry or if the female-male wage gap became smaller over time.

View all posts by Jan Ruffner >