The medium through which we listen to music has been changing from cassette tapes, cds, mp3 players, and now to streaming services. Thus, it was only logical to explore the popular songs from Spotify, the leading music streaming market, if I wanted to explore the trends in music and how it has changed over the past 10 years. If any trends exist among the features of the popular songs from the Spotify, it might be helpful to predict the future music trend for the entertainment business to be more successful.

It led me to check by observing the average of each feature every year. BPM seemed like it was getting higher until the year of 2014 but started decreasing, while energy tends to keep on decreasing. Danceability started increasing significantly starting from the year of 2013, and the loudness has been fluctuating since the year of 2014. Liveness has been decreasing since 2016, valence has been fluctuating since 2015, and duration tended to decrease since 2015, meaning people are preferring shorter songs. While the acousticness significantly increased in 2018, speechiness fluctuated but seems to be on a general decline since 2017. After exploring the change in trends annually, I also started wondering: how much does each feature contribute to the popularity of the song?

I decided to create scatterplots and density maps to more accurately identify the frequency of a feature’s value against the popularity of the song and checked the approximated median of the most dense area. Surprisingly, all of the features seem to be the most dense near the values in the 70s, which indicates that songs with popularity values around 70 have more mainstream characteristics than the ones on either extreme side of the popularity spectrum. 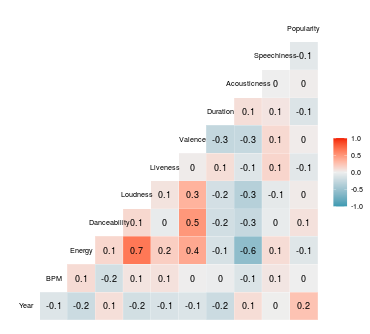 With the data analyzed above, I was able to explore the trend of music in past 10 years. However, this made me want to go more in depth dataset-wise by comparing data with the Billboard’s chart of 10 years, or with the list of songs that got an award to see if any other trends exist between them.