Airbnb boasts almost two million listings in 34,000 cities, and according to data from Inside Airbnb, a independent data analysis website, listed about 36000 apartments in New York as of July 5, 2016. This data exploration sets out to visualize how Airbnb operates in New York City. Airbnb's presence in NYC has been clouded in controversy from the beginning, with law makers arguing that Airbnb drive up rents for New York residents, as well as facilitating a lot of illegal hosting activities, all the while not paying any of the fees hotels are subjected to. Rent is drived up when landlords decide to rather rent apartments to short-term guests at higher rates, compared to signing up tenants for yearlong leases. In a study conducted in 2014, The New York State Attorney General concluded that 72%of all units used as private short-term rentals on Airbnb during 2010 through mid-2014 appeared to violate both state and local New York laws. New York’s short-term rental laws, which were last updated in 2010, basically prohibit most apartments (buildings with three or more units) in New York City from being rented out for less than 30 days. This means that the majority of entire home/apartment listings that you find on Airbnb and other sites for New York City would be considered illegal, especially if you can book them for a period of less than 30 days. Airbnb has not actively helped city or state officials limit illegal listings on their sites and, according to data supplied by Airbnb, entire home listings outnumber listings for private rooms or shared spaces on their platform for New York City. This analysis sets out to to investigate the number of listings that are available for long extended periods throughout the year, as well as shed some light on just how much illegal listings are hosted on Airbnb's platform. I'm going to visualize the distributions of Prices, Reviews per Month, Availability, Minimum Stay by each of the five boroughs. Next, I visualize how Median Income in each neighborhood is correlated with prices and the percentage of entire home listings available. Finally, I do a Geo-Spatial Analysis of Prices, Reviews per Month, Availability and Minimum Stay.

To start things off, let’s look at the distributions of Price, Reviews, Availability and Minimum Nights.  These plots primarily investigate how the 5 Boroughs difference when we compare the prices, reviews, and availability of each respectively. 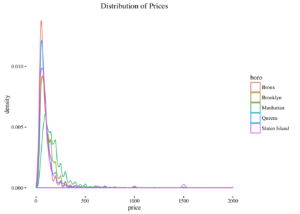 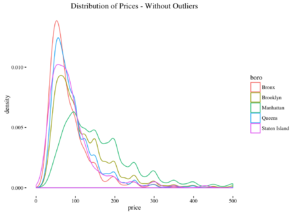 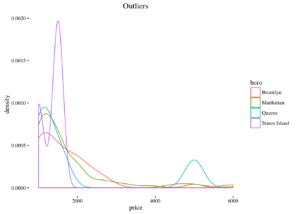 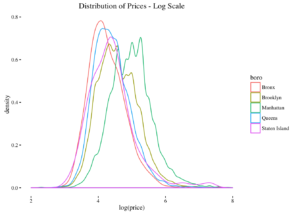 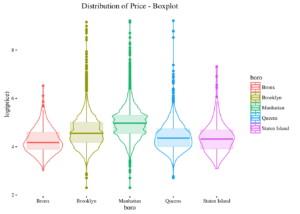 We can clearly see now how prices are distributed. Manhattan, as expected, is the most expensive followed by Brooklyn, Queens, Staten Island and finally The Bronx.

The Reviews per Month variable gives us a good indication of how much activity goes on in each Borough. The more reviews a listing has per month, the more it gets rented out. The plot below shows that the median number of reviews per month is 1.  The plot to the right shows the outliers. The most active listing is in Queens. It averages about 11 reviews per month. Listings in Queens seems to be the busiest on average, but we see quite a few places in Manhattan and Queens that have high frequency listings. 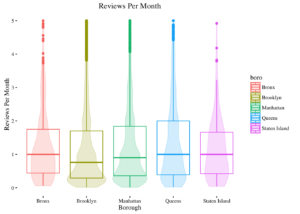 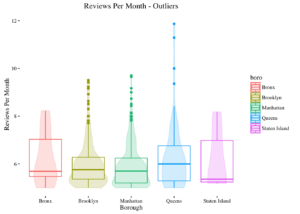 Next I investigate how availability differs across the five boroughs. What struck me as quite interesting is how much these listings are available on an annual basis. The distribution shows that listings are either available for a very short period, or essentially for 365 days out of the year. A quick look at estimated occupancy rates for Entire Home rentals in New York City (as at July 2, 2016) shows us that more than 6,000 entire homes are being rented for more than half the year, and most likely are no longer available on the rental or owner-occupied housing markets. 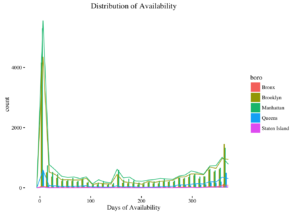 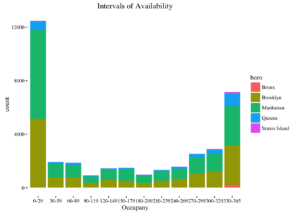 Now lets test the claim that 72% of listings are illegal. Under state law, it is illegal to lease most homes—with the exception of one and two family residences for periods of less than 30 days when the owner or tenant is not present. This means that if an apartment is listed for less than thirty days and is listed as an “entire home”, it most likely is an illegal listing. The data shows that there is definitely something fishy going on. 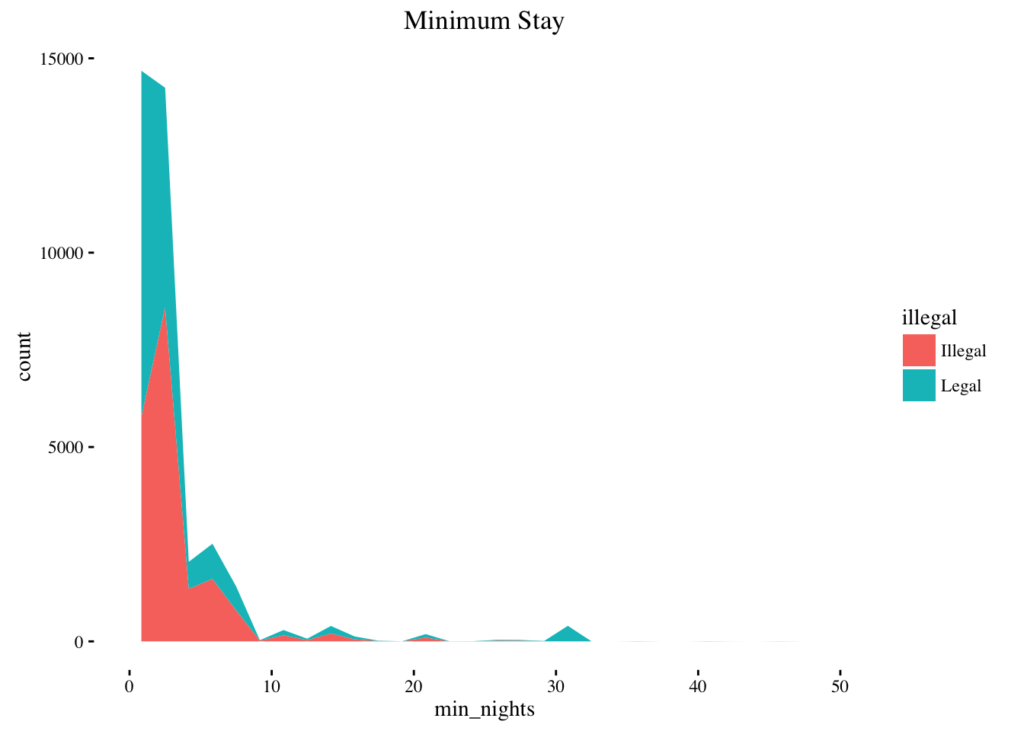 The following section is dedicated to exploring the relationship between Median Income in each neighborhood, and how it is correlated with prices and the percentage of entire home listings available. As we might expect, the more affluent regions in New York charge higher prices, as well as list a higher percentage of entire rooms. 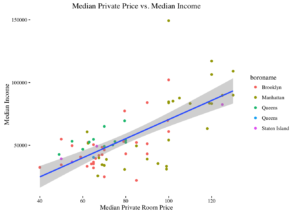 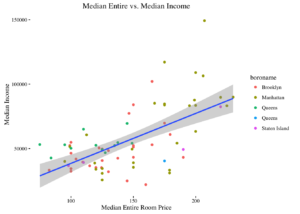 The relationship between Median Entire Room Price and the Median Income for each neighborhood showed a positive correlation of 0.61. Wealthier neighborhoods list more expensive apartments. We again see that Brooklyn and Manhattan are the most expensive listings. 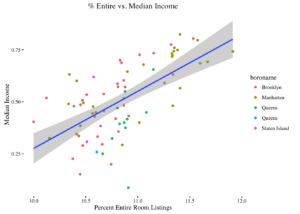 After I doing a log transformation, we observe a linear relationship, with a correlation of 0.632 between the log of median income and the percentage of apartment that are for entire room listings. I then colored them by Borough. We see that Brooklyn and Manhattan have the highest percentage of entire apartment listings.

This section of my data exploration spatially visualize Airbnb’s listings in the city. I’m going to look at prices, activity levels, and which rental units are illegal under New York law. 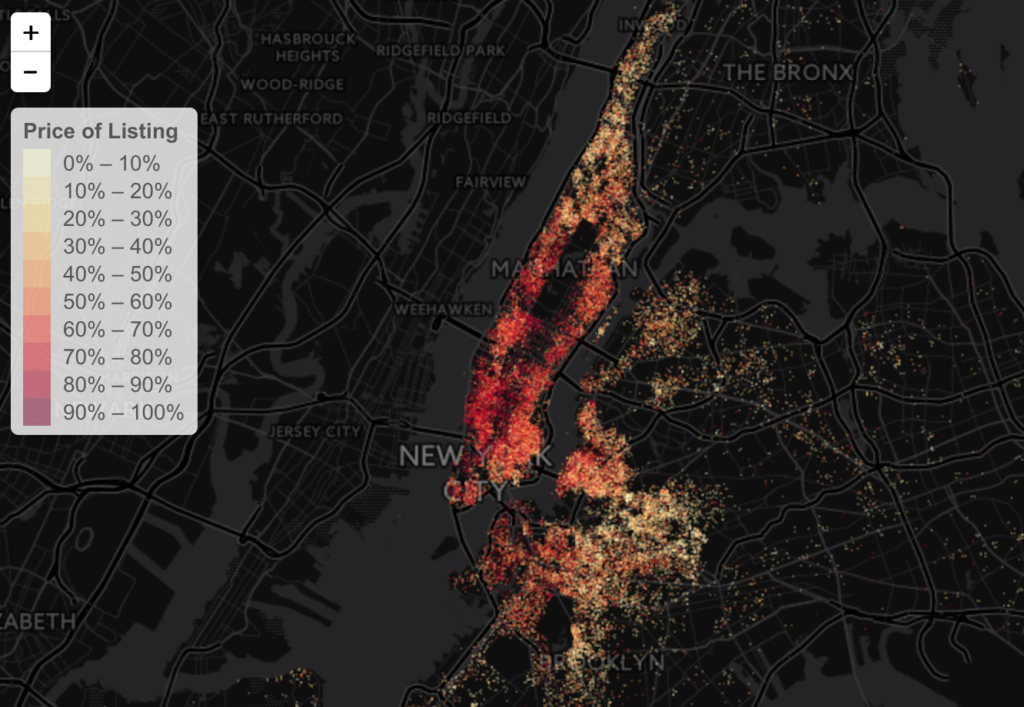 The red on the map shows the expensive listings, and the yellow color denote the cheaper listings. As expected Manhattan has the highest concentrated regions of expensive listings, especially in areas like Soho and Chelsea and the Financial District. The next plot show how prices are distributed across the neighborhood. 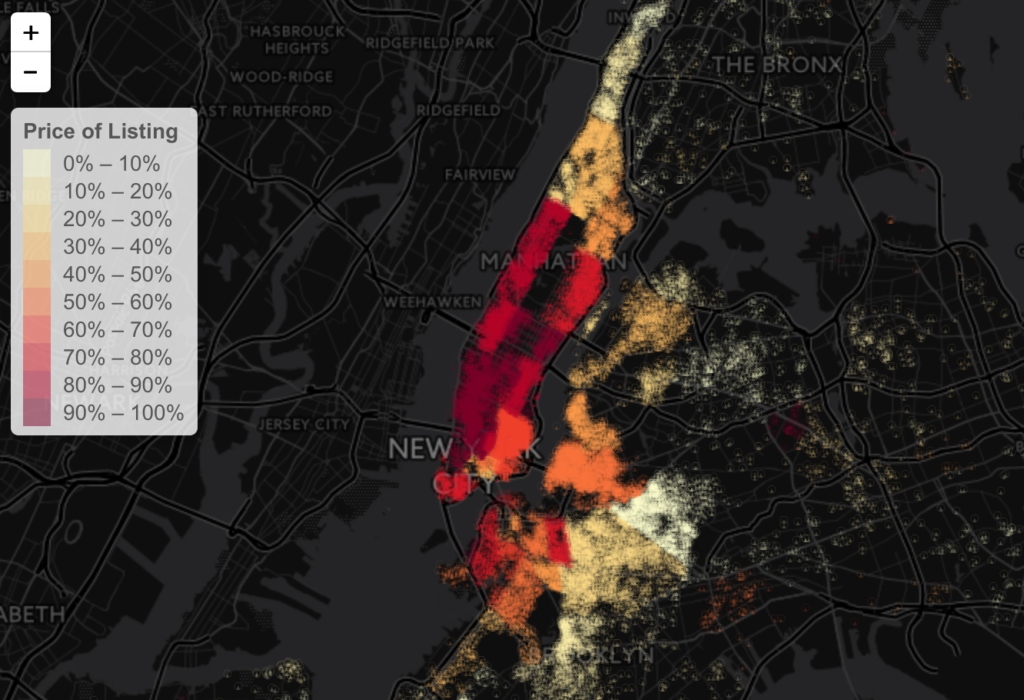 The plot shows exactly what we could have guessed – Manhattan has the more expensive listings, on average, and the most expensive neighborhoods are concentrated near the financial Chelsea, Soho and the Financial district. The Bronx, as well as the outskirts of Brooklyn has the cheapest neighborhood on average. 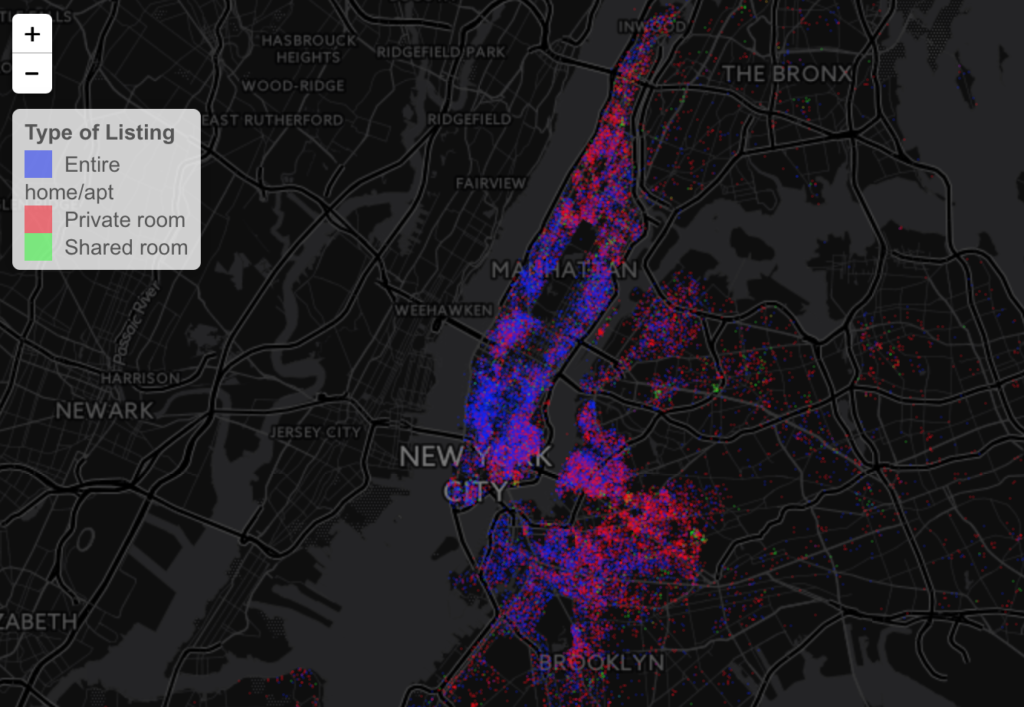 Above we can see how the type of listing is distributed across NYC. We can clearly see that the more expensive regions are also the regions that list more entire apartment listings. Shared rooms are rarely seen. 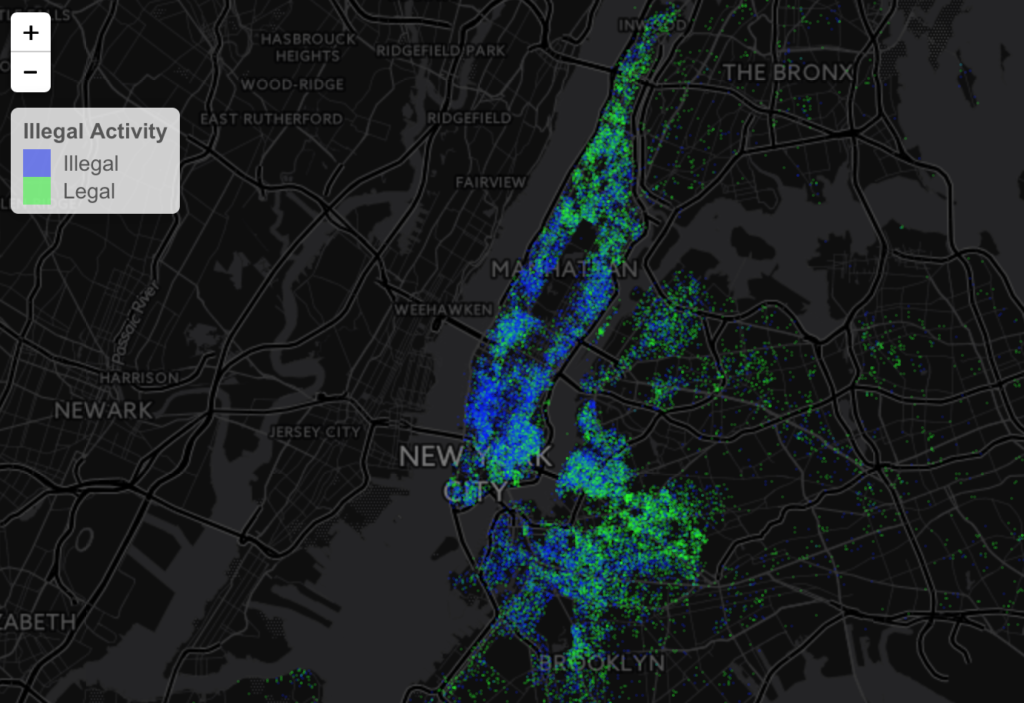 On June 17, the New York state legislature passed a bill that would heavily fine hosts on Airbnb and other short-term rental sites like HomeAway, FlipKey, and VRBO, who post listings that violate the state’s laws on short-term rentals. The new law has a penalty of up to $1,000 for the first violation, $5,000 for the second violation, and $7,500 for the third and subsequent violations. My analysis shows that quite a number of people will be in big trouble. Governor Cuomo has until January to make his decision about the bill, but some have wondered: Is this law as it’s written, legal? Or could opponents of the law argue that it is unconstitutional? If Governor Cuomo does approve this advertising law, there’s a chance it could have a chilling effect on the number of listings Airbnb has for New York City, its biggest market in the U.S. Hosts renting out entire apartments for less than 30 days may choose not to list their apartments any longer, for fear of paying those hefty fees.

Thomas October 3, 2016
Where can one find the airbnb data sources?