Sadly, the NBA season has been put on hold this year due to coronavirus, and as an avid basketball fan and long time player, I was devastated to find out that the NBA might be canceling the remainder of the season if the situation does not improve. Usually, around this time of year, I would be eagerly awaiting the NBA playoffs, excited to watch the best players in the world compete for the ultimate prize. Instead, the season might be canceled all together.

I decided to reconnect with my passion for basketball by doing my python web scraping project on the NBA season. My goals for the project were two fold:

For this project I chose to use Selenium to scrape stats.nba.com for data on each player for each of the last 5 seasons. The data came out to be around 2500 rows and 31 columns. I had to web scrape the data because the NBA does not make the data downloadable on their website, and I used Selenium because the website contains dynamic tables that would not be able to be scraped using Scrapy.

There are a few important definitions to note within the data that are important to the project. First, all the stats collected were on a per game basis. Second, the Plus/Minus stat is defined as how the team did when the player was on the court.

This provides insight into how impactful a player is for his team, while also taking into account “intangibles” that do not get recorded on the stat sheet. Lastly, “Relevant Players” is a definition that I created myself, in order to avoid including injured players or bench warmers in my calculations, as including these players skews the numbers.

How do I identify up and coming players?

In order to find up and coming players, I decided to use my own domain knowledge as well as research to filter the 500+ NBA players based on specific criteria. First, the players needed to be young, and for that I decided to filter for players below 24 year old. I chose 24 because the average age of retirement in the NBA is mid 30s, meaning about 15 years playing in the league. 24 would mean the player is in the first third of his career.

In order to filter out the star players and get the players that are rising, I filtered for players that averaged less than 30 minutes per game. Based on this criteria, I was able to come up with the following group of young players below that I believe have the potential to exceed expectations next year. 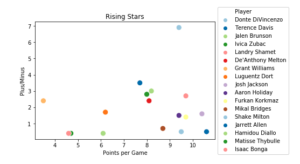 After analyzing young players to watch, I also wanted to look at young teams to watch. In order to analyze this, I grouped by team, and then created a box plot (see below) of the median age for each team. What I found actually was not surprising, as most of the older, more experienced teams, were some of the best in the league, while younger teams were all towards the bottom of the league.

Additionally, two teams stood out to me as teams to watch for next season. First was Memphis, who was the only team in the bottom quartile when it comes to age, that was still on track to make the playoffs this year. Next year, with a little more experience, it is possible that they could perform even better.

The second team that stood out was Golden State. The Warriors are interesting because this year two of their top players, Steph Curry and Klay Thompson, were out with injuries, in turn allowing their fairly young team to build up crucial game experience that they otherwise may not have, had the two stars been healthy. 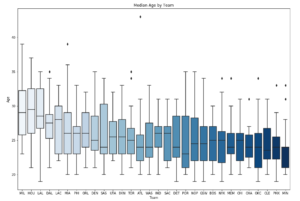 Which Players are Undervalued?

To try to get a sense of which players were undervalued, I started by plotting the points per game vs salary for every player in the NBA. As shown in the plot, most players fit into the category of low scoring (under 10 points per game), but also not making that much money (under $5M per year). However, as players start scoring more, their salaries also tend to increase, with the top paid players scoring over 20 points for game and making upwards of $35M per year. 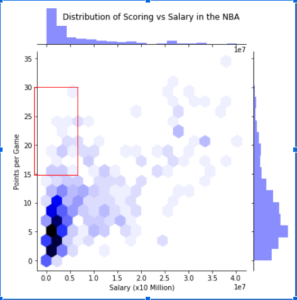 The interesting area that I wanted to look at was the red box, which shows players that score over 15 points a game, but are still making less than $5M per year. After filtering for these players, I came up with the plot below showing 16 undervalued scorers in the NBA. This information could be useful for coaches that are looking to add a scorer to their lineup, or a GM who is concerned about salary cap space. 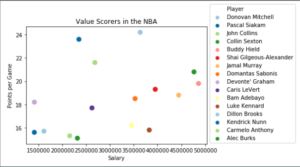 Next I wanted to look at who would win the MVP award. My methodology for analyzing this was three fold:

Based on this methodology the three Key Stats I came up with were Points per Game, Plus/Minus (Team Impact), and Team Wins. By looking on the graphs below, we can see that previous MVPs not only averaged over 25 points per game and had high team impact, but their teams actually performed at an extremely high level, winning close to 80% of their games. 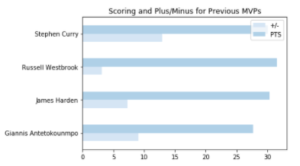 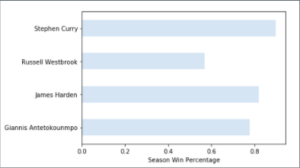 Now, by comparing the 2020 MVP candidates based on these stats we can try to speculate who will win this year. We see that in the first graph, Giannis and James harding lead the way in scoring, but Giannis has a far higher Plus/Minus. Additionally, when we look at team performance, both Giannis and LeBron James stand out, but Giannis also holds the lead in this category. For this reason, I select Giannis Antetokounmpo as my 2020 MVP. 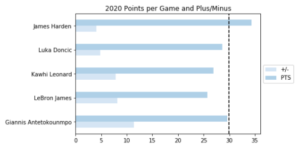 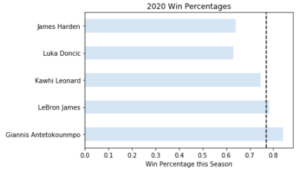 For the final section, I wanted to see if I could crown my own NBA champion using the data from the season. Comparing teams can get tricky because you can not necessarily compare based on record, given that teams play in different divisions and end up playing against different teams.

The way I thought to compare teams was by comparing the actual players on each of the teams. In order to do this, I grouped the players by team and looked at the average Plus/Minus in an effort to see how much value the players bring to the team. Through this comparison, I found Milwaukee to be the rated highest. This comparison showed me Milwaukee to be the rated highest. 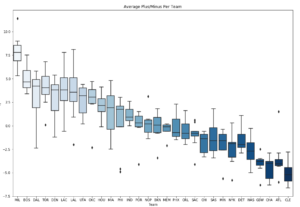 The last piece of analysis I did, which was the most eye opening, was to look at the top 20 players in the NBA just based on team impact, or Plus/Minus. I then looked at how many of those players were on each team. What I found was that Milwaukee had a whopping 7 players in the top 20, more than double the next highest team. This was especially impressive considering that this means that Milwaukee's entire starting lineup, along with two bench players, all add significant positive minutes when they were out on the court. Based on these numbers, I selected the Milwaukee Bucks as my 2020 NBA Champion.

View all posts by Soham Mishra >