Alternative Fuel For Vehicles Rise in the US 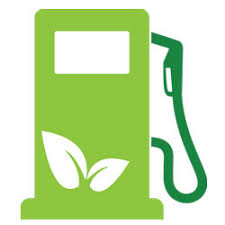 The importance of alternative fuels to fuel our vehicles has risen tremendously over the years; oil markets have tightened due to supply constraints, and climate change has begun to be a serious burden. However, there lies a chicken and egg problem when changing the existing transportation system towards alternative fuels: there must be the simultaneous production of new vehicles, new fueling stations, and new fuel transportation systems – which is a hefty investment.

The feasibility of a fuel being a relied-upon alternative to gasoline depends on the following features: fuel accessibility, fuel transportation infrastructure, economic viability, cleanliness, and performance. The fuel types that best satisfy these requisites best will have the most policy support; in other words, the companies that promote a more viable fuel will be supported by subsidy programs, tax breaks and loan guarantee programs which, in turn, will help that certain fuel type prosper over the other alternatives.

Both data sets I used came from the US Department of Energy’s data selection site. One of the data sets contains the location of the alt fuel stations and the type of fuel they supply. For electric fuel stations, the data set also supplies the type of EV charger that is stationed there as well as the accessibility of those stations (i.e. ‘public’ or ‘private’).

The second data set I used, also from the US Department of Energy’s data selection site, contains data on the type of vehicles sold within that past three decades. The data includes the year the vehicle model was made and what type of fuel the vehicles takes. This will allow us to compare the progression in vehicles types with the corresponding fuel they take.

Users can input which type of alt fuel they want to locate, and, depending on the fuel they choose, those fuel stations will populate on the map.  For example, if we click both the LNG (Liquid Natural Gas) and the CNG (Compressed Natural Gas) box, we can see that there are much more CNG stations then there are LNG stations.

If we examine the legend of each of these fuel types, there properties explain why there are much more CNG stations; although LNG is a much more energy dense fuel (by a factor of 3), the fact that LNG is much tougher to transport – since it must be supercooled and transported accordingly – CNG is able to establish fuel stations much more easily. 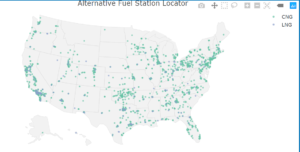 To compliment the data displayed on the map, the last tab allows the users to view the distribution of different vehicle type over time. According to the data, most alt fuel vehicles have maintained the same number of vehicles deployed over the years; the only vehicle type that has grown consistently over the past two decades is electric vehicles.

What we discover from the map inputs is that the most well-dispersed alt fuel stations are LPG (Liquid Petroleum Gas), E85(Ethanol 85%), and ELEC (electricity) stations. With a little background knowledge, we can deduce why that is. Like gasoline, LPG is also refined from petroleum; the difference in their fuel characteristics comes from their fracturing processes.

LPG has a less-extensive fracturing process and is, thus, cheaper than gasoline, but since it still has many of the same properties as gasoline, many vehicles in the existing fleet can intake this type of fuel. Similarly, E85 is a fuel that contains a percentage of gasoline (15%) so flex-fuel vehicles can take these fuels as well. Since both of these fuels are iterations of gasoline, these fuels can be found at typical gas stations.

The only fuel that stands apart from these well-dispersed fuels are electric fuel stations. The reason why electric stations proliferated so widely is informed by the superior properties of electric vehicles. Not only are electric vehicles close to being carbon-free, but they are, by far, the most fuel-efficient vehicles. Additionally, they have the highest round-trip efficiency, highest plug-to-wheel efficiency, and are among the cheapest forms of fuel.

As mentioned before, Level 2 chargers are the most prevalent type of electric charger. What is also worth mentioning though, is the slowdown in production of public Level 1 chargers. Even though they are the cheapest form of chargers, since they charge at a fueling rate of 4.5 miles per hour of charging, their deployment in public areas has become a myopic endeavor.

This app could be improved by the following additions:
1)   Include the open date of fuel stations to see how they progressed over time.

2) Incorporate data on what type of facilities station EV. This will shed light on the viability of the chargers depending on the type of public place they are stationed.