The objective of this third project was to build machine learning models to predict house prices as part of the Kaggle competition House Prices: Advanced Regression Techniques. In this competition, we used the Ames Housing dataset, which was compiled by Professor Dean De Cock of Truman State University, and which describes the sale of residential properties in Ames, Iowa during the period 2006 - 2010.

The first step in this analysis was checking for outliers in the dataset that could potentially skew our model predictions. Given that the GrLivArea variable, which captures above grade (ground) living area in square feet, exhibited a 0.71 positive correlation with SalePrice in the training dataset, I got a high degree of confidence that it would offer strong predictive power later on and would by extension provide a good screen for potential outliers. Plotting the SalePrice dependent variable vs GrLivArea in our training dataset revealed two seeming outliers exceeding 4,500 sqft in total area: 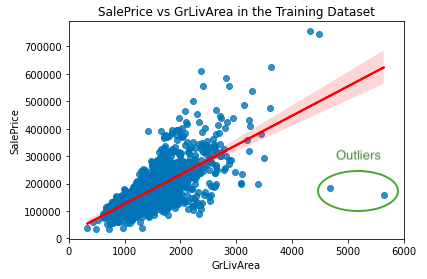 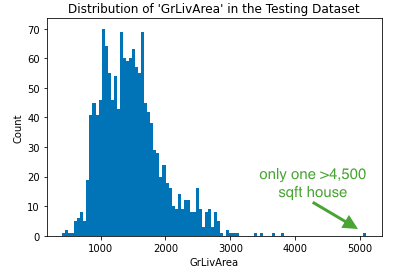 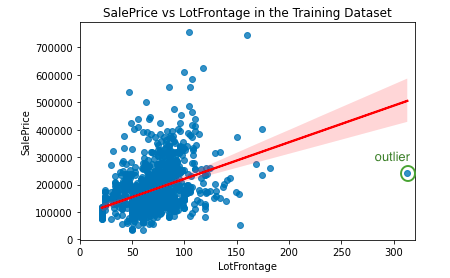 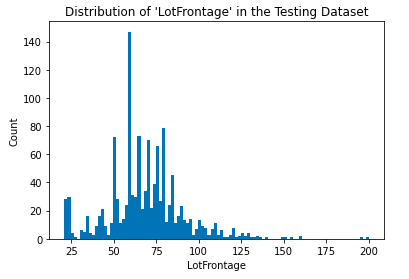 In the case of numerical variables, imputation was performed using either the mean or the mode, whichever was most appropriate. For instance, the 486 missing values in the LotFrontage variable were imputed using a groupby + aggregate of mean LotFrontage values for each Neighborhood (no NA’s), as it was observed that LotFrontage values for each neighborhood were tightly distributed. On the other hand, the one missing value in the continuous variable GarageArea was imputed to zero as it was assumed that the absence of a value most likely entailed the absence of a garage. Some numerical variables, such as MoSold, were converted to string type in order for proper dummification to take place later on. 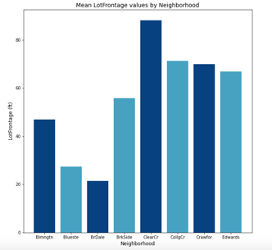 For categorical variables, values were imputed using the mode of that feature set. The one missing value in the Exterior1st variable, for example, was imputed with the mode VinylSd, which corresponded to a house with a Vynil siding exterior. Other categorical variables were dropped entirely from the dataset when one value dominated the distribution, such as RoofMatl, which was dropped as CompShg accounted for 98% of values.

For categorical variables with string values, these were converted to ordinal variables using dictionaries mapping the string values to integers. For instance, the KitchenQual variable with categories Excellent, Good, Typical, Fair, and Poor, was mapped to {'Po':1, 'Fa':2, 'TA':3, 'Gd':4, 'Ex':5} once its one missing value was imputed to the mode (Typical in this case). A total of fifteen variables were transformed using this methodology.

In addition, certain binary variables were created to capture the presence or absence of certain features. The Has2ndFloor binary variable, for instance, took on a value of 1 if 2ndFlrSF > 0, indicating that a house had a second floor. Likewise, the YearsSinceRemodel variable, capturing how many years it had been since the house was remodeled, was computed by taking the difference of YrSold and YearRemodAdd. Some of the other features that followed similar methodologies were:

Given the large number of features in the dataset that could cause simple linear models to overfit, I decided to skip Linear Regression and to start directly with penalized linear models that would tend to overfit the data less. The five models I was therefore interested in testing were Ridge, Lasso, Random Forests Regressor, Gradient Boosting Regressor and XGBoost:

Feature selection was approached two separate ways to test which worked best for different models, the first using correlation values and the second using Recursive Feature Elimination ("RFE"). The first approach was to select features based on the absolute value of their Pearson correlation coefficient with SalePrice and to fit each of the models on these different feature subsets.

In order to speed up this process and to standardize the way selections were made by correlation coefficient value, I wrote a Python script using object-oriented programming that selected these features based on different input correlation cutoff points. All models were tested using cross validation with 2 train folds and 1 test folds each containing 33.3% of the data. The preliminary results following this methodology for each of the models with no hyperparameter tuning can be seen below: 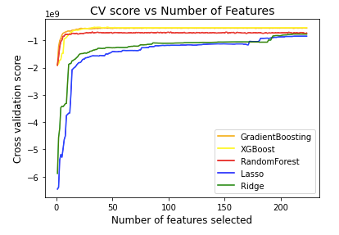 The second approach was to use Recursive Feature Elimination to select variables by recursively considering smaller and smaller sets of features. RFE works by repeatedly building models and selecting the best or worst performing feature at any given point, setting this feature aside and repeating the process with the rest of the features. RFE computes which features should be selected-out at every stage by looking at the feature’s weight coefficients for linear models and feature importances for tree-based algorithms.

Once these features selected-out, RFEcv calculates the new root mean squared error score on the validation data, and the subset of features left at the step that gives the highest score on the validation data is considered to be "the best n_features" subset. Scikit-learn’s RFEcv library was used to implement this recursive feature selection. The following graph shows trends in RMSE vs number of features for each of our models:

The feature importance rankings of the RFE-selected feature subsets provided some interesting preliminary insights, such as that the overall material and finish of the house was a strong predictor of SalePrice in our XGBoost model: 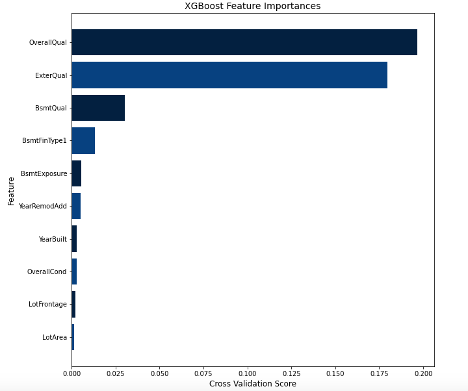 Once the data processed and the features selected, the next step in the process was finding the best hyperparameters for each of our models to ensure high model accuracy. Hyper-parameter tuning is important to make sure that models are not either overfitting or underfitting and to control for the bias-variance tradeoff.

Hyperparameters such as n_estimators or learning_rate for tree-based models can also significantly impact model run time and can in certain cases make the added computational expense not worth the added accuracy benefit they yield. The GridSearchCV package in Python sklearn was used to complete an exhaustive search of the available hyperparameters and yielded higher accuracy scores for each of our models after tuning took place. The different model predictions and how they compared to the true SalePrice values represented by the straight line can be seen below: 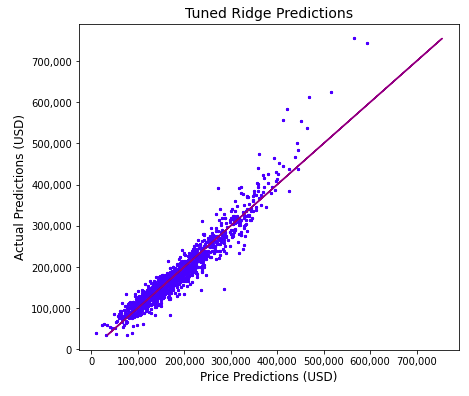 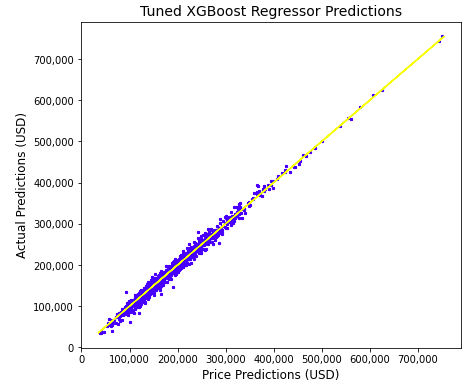 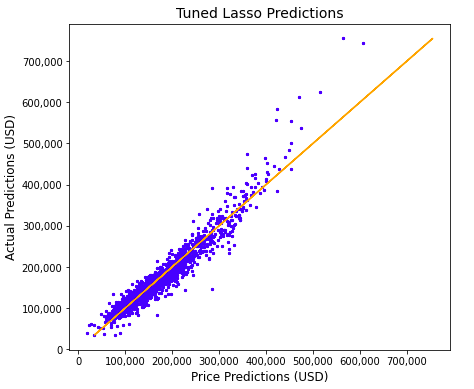 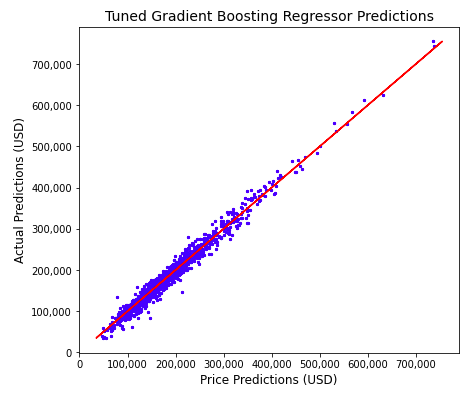 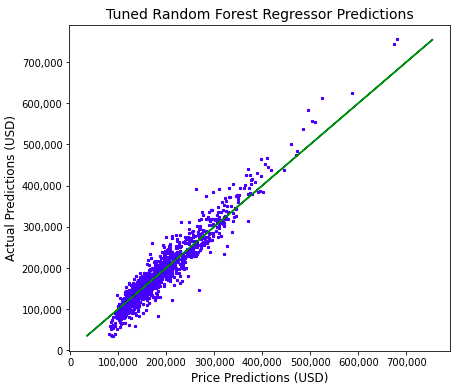 The last step in the process was stacking the models. Model stacking is a method that uses the predictions of different Level 0 models to train a Level 1 meta-model that predicts the same y variable and can oftentimes produce an even more accurate prediction of the target variable. In this way, the Level 1 model can weigh the predictive strengths and weaknesses of the different models and capture different kinds of relationships in the data that an individual model may miss.

The tradeoffs for this potentially higher accuracy are higher computational expense as well as lower interpretability, as individual features can no longer be examined separately to better understand what each contributes to the model. This tradeoff of lower interpretability is addressed in the conclusion. For the purposes of this project, a Level 1 model was trained on top of our Ridge, Lasso, RandomForests, XGBoost, and Gradient Boosting Models and as expected outperformed all individual model components, yielding a final Kaggle score of 0.13072.

XGBoost: Qualitative variables such as OverallQual and ExterQual are most important