Analysis and visualization of suicide rate in the United States

Contributed by Wendy Yu. She is currently in the NYC Data Science Academy 12 week full time Data Science Bootcamp program taking place between January 11th to April 1st, 2016. This post is based on her first project - R Visualization.(due on 2th week)

Every year, there are more then 800,000 people who take their own life, not including attempts. In other words, there is one suicide every 40 seconds. Suicides happen globally across all ages and genders with different rates. In the United States, it is the second leading cause of death for people aged 15-29, and the tenth leading cause of death across all ages. Suicide is a serious problem worldwide, but it is the most preventable when comparing to other leading causes of death. The first-ever Mental Health Action Plan of the World Health Organization was conducted in May 2013. The goal is to reduce the suicide rate by 10% by 2020.

Here, I analyzed suicide rates in the United States and across the world. The goal is to provide insights into this topic and hope this data can be used to prevent suicides in the future. 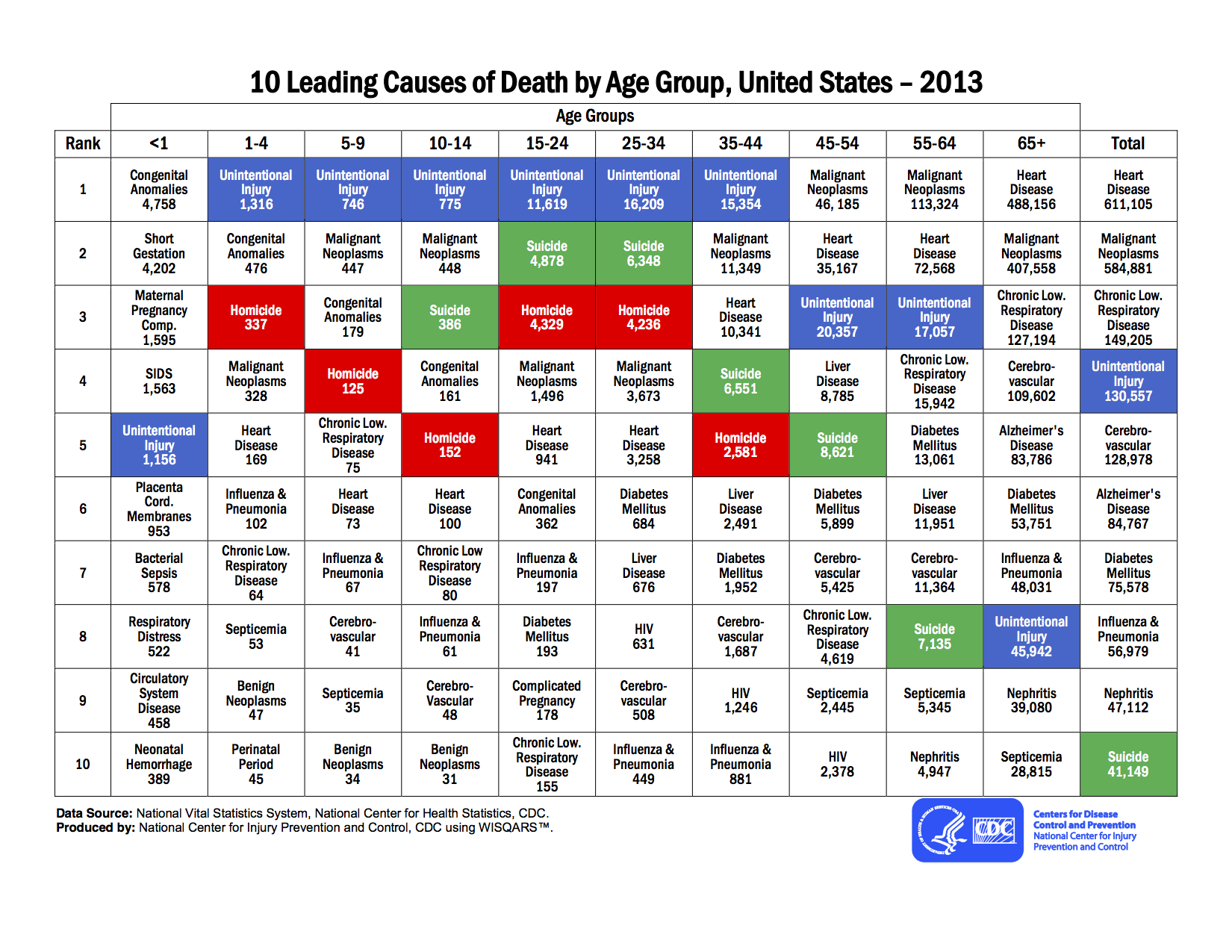 The Geography of Suicide 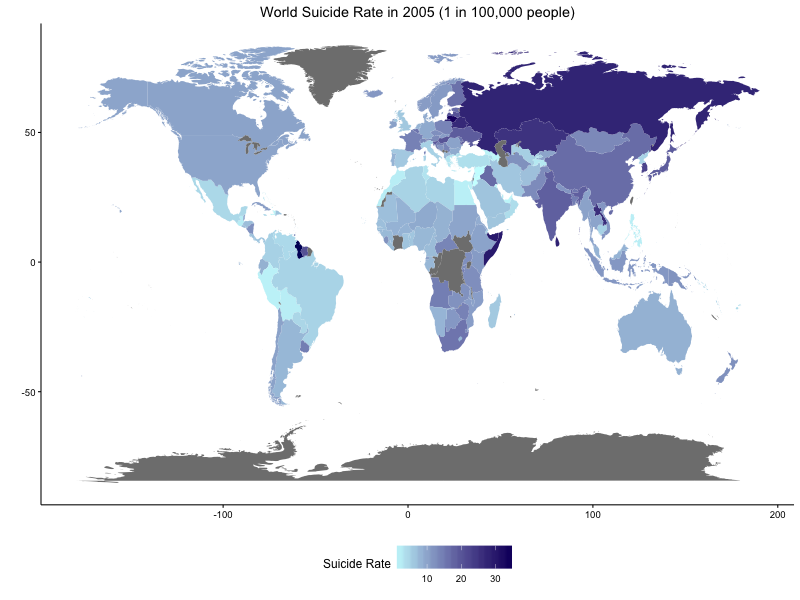 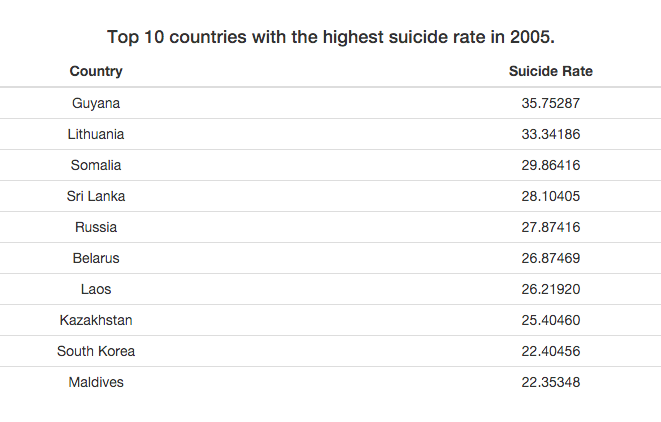 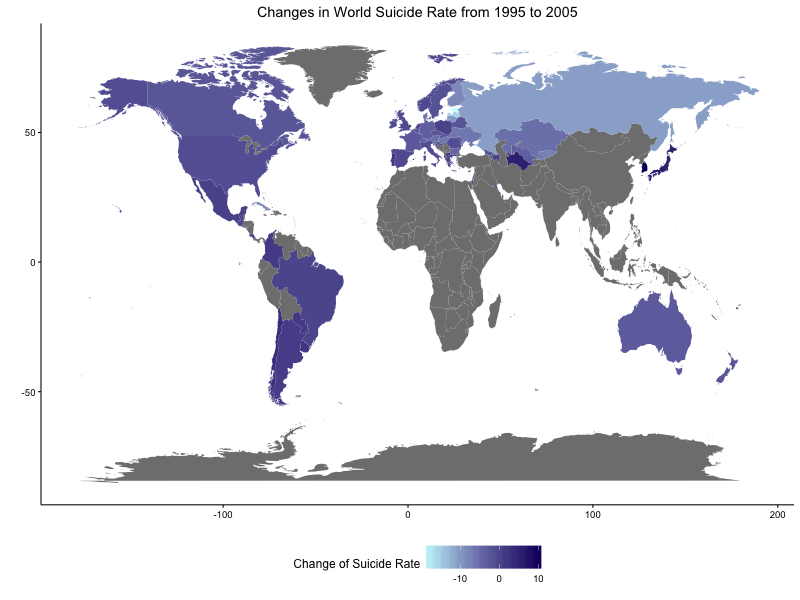 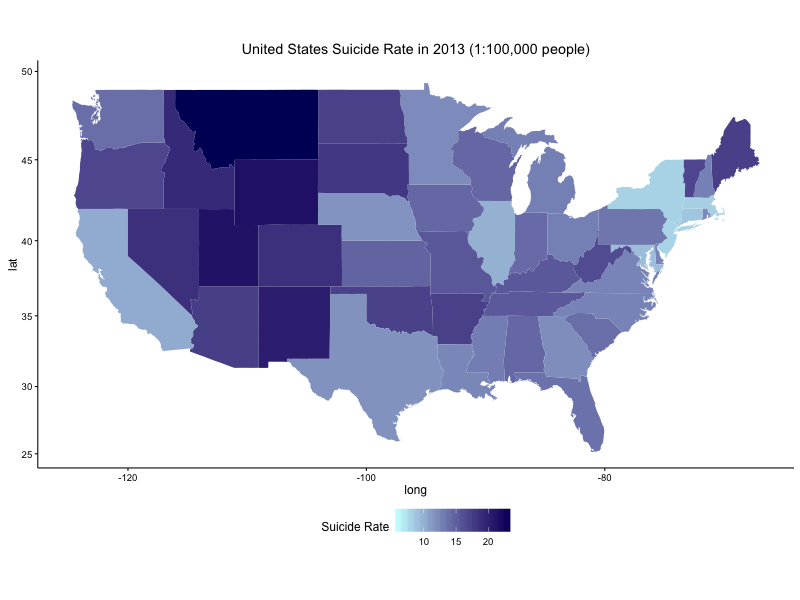 Who is at risk? 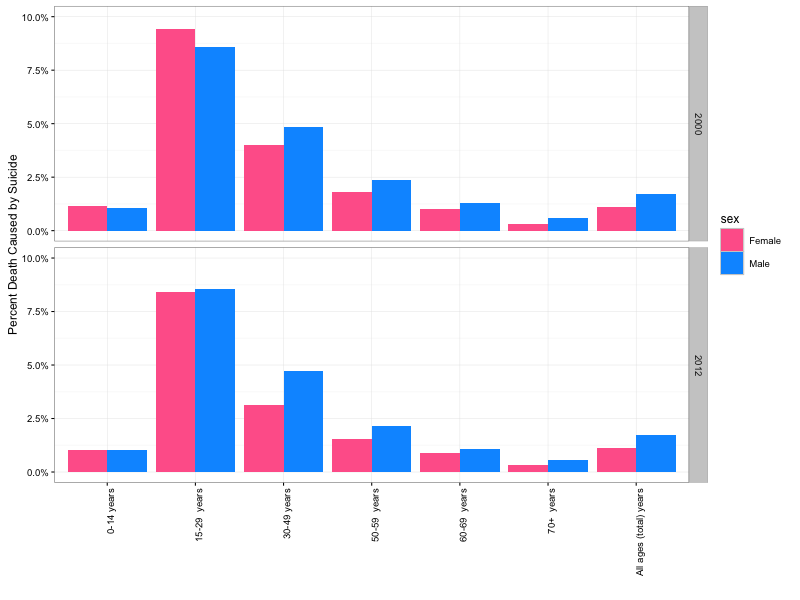 People choose to end their lives for complex reasons. It is difficult to pin down the cause of suicide. Commonly cited reasons include:
* Life history: traumatic experience during childhood, and sexual/physical abuse.
* Life style: alcohol or drug abuse.
* Life event: loss of loved ones or loss of income.
* Mental heath: depression or schizophrenia
Here I explored a few factors that I think would impact suicide rate. 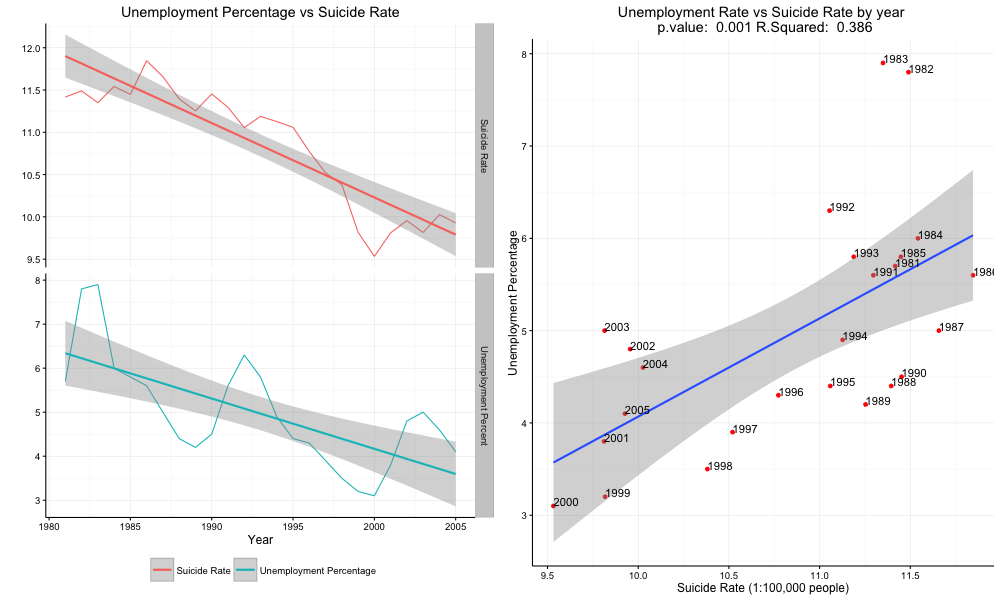 The figures above demonstrate the relationship between unemployment and suicide rates over time. Another way to analyze this relationship is to examine it state by state. The figure below shows the correlation between unemployment rate and suicide rates by states in 2013. Interestingly, the result suggests the opposite from the above figure. We see a negative linear relationship. One of the explanations is that 2013 could be the outlier of the trend established from the above figure. Other possibility is that the trend changes after 2005. Since the figure below uses data from 2013, it wouldn’t fit in the trend established from 1995 to 2005.

From our analysis, we can conclude that there is a positive relationship between unemployment rate and suicide rate between 1995 and 2005. The trends of the two variables after 2005 remain unclear from this analysis. 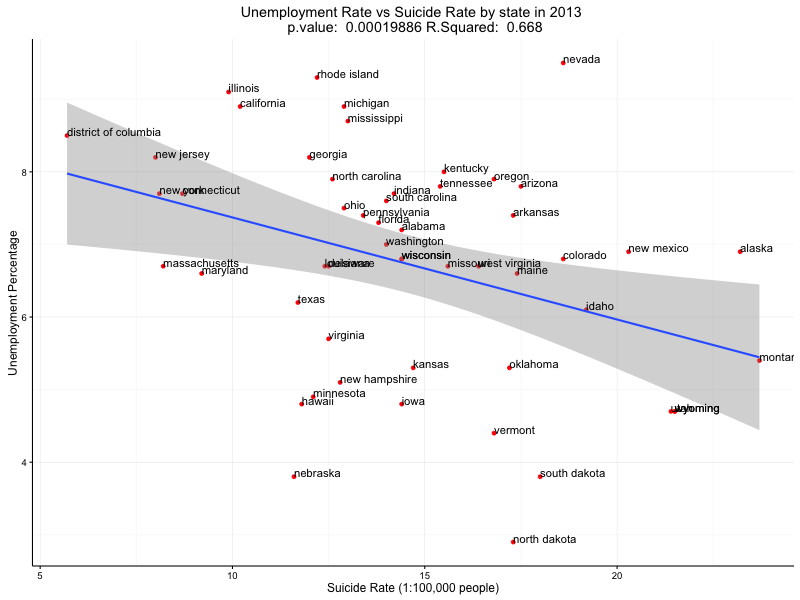 The theory is that students who drop out of school are likely to be experiencing negative life events, which could make them more vulnerable to commit suicide. This analysis explores the relationship between school enrollment rate and suicide rate. School enrollment rate showed here is the percentage of total population aged 3 years old and above who are enrolled in school. From the left figure we see a negative trend between the two variables. The suicide rate decreases as school enrollment rate increase between year 1999 and 2013. We further analyze the correlation between the two variables (right figure) and indeed there is a strong negative linear relationship. 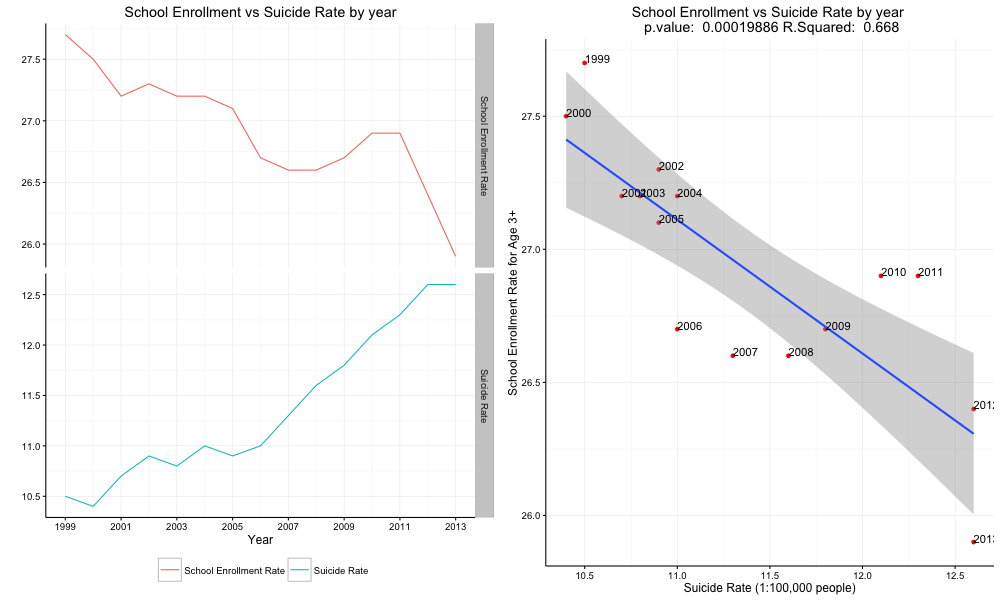 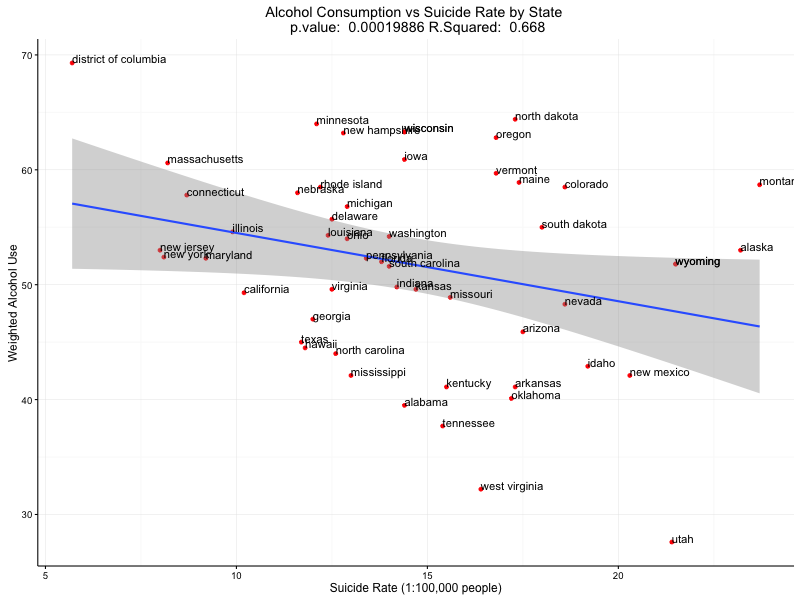 Correlation does not imply causation 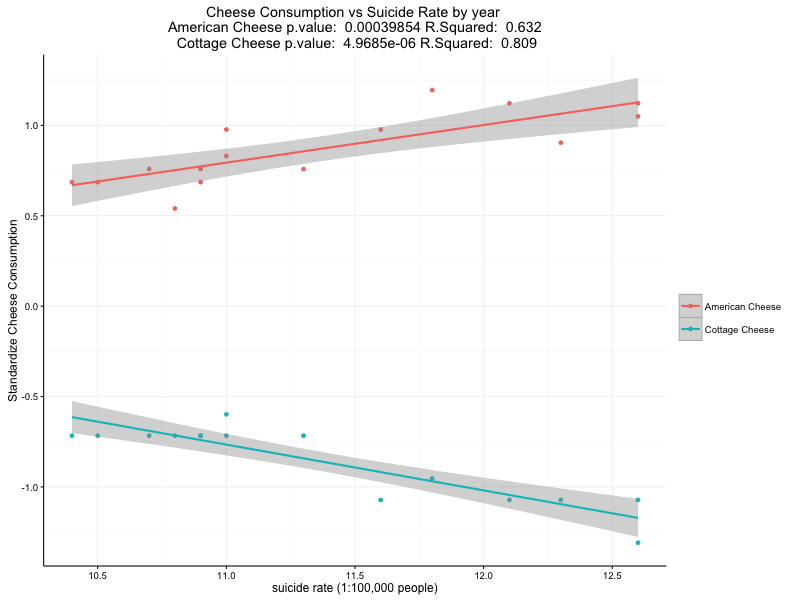 Suicide is an escalating problem, and it is preventable. Analysis from this report provides an insight to suicide behavior. We found that

I hope that the above finding can be useful for developing suicide prevention strategy.