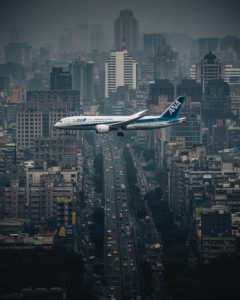 Airline passenger satisfaction is a key factor to increase passenger  loyalty  and maintain customer base. This can be determined by on-time performance of flights arriving on their schedule time . Late flights arrival has a spiral effects on other connecting flights to delay by waiting, as well as passengers who need to catch up with connecting flights. In the past several years to present, airlines and airports are facing problems with flights delay that is causing huge financial cost on management and also, affecting passengers schedules, causing inconvenience of passengers due to long wait hours by not arriving at their destinations on time. These delays occur either at the origin airport, during the air fly or at the destination airport. This analysis looks at the various reasons of  flights delay on a monthly, weekday, airline choice and airport origin bases , to help passengers, airlines and airport management get insights and make effective decisions by implementing sound policies.

To analyze the Las Vegas 2019 arrival data to find out which days, months, airlines and arrival airports experienced most delays based on the reasons of flights delay in 2019.

The LAS_Arrivals_2019 dataset is from kaggle.com; it comprises 19 variables and 164,045 observations. I preprocessed the entire dataset and created a shiny app based on reasons for flights delay variables.

The plot choice  is bar chart, used to show and analyze reasons of flights delay ; with delay hours variable created from reasons of delay variables in minutes for various airlines that landed in Las Vegas airport in 2019. The analysis varies among airlines ; I chose American and United airlines for analysis and comparison. 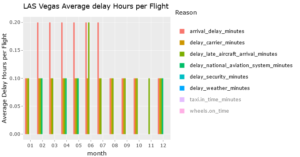 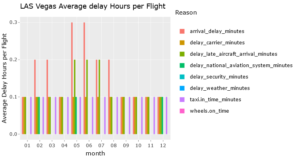 The above visuals show reasons of flights delay for United and American airlines; American airline has lower delay hours for the months of January, February, April, September , October, November and December; while May and June have the highest delays hours . Also, arrival delay hours is longer compared to other delays and highest carrier delay occurred in May and June with 0.3 hours. For those same months, delay late aircraft arrival is 0.2 hours , second highest compared to other reasons of delay. It is evident from the graph that arrival delay and late aircraft delay are the highest. On the other hand, with United airline, arrival delay and late aircraft delay are almost the same for all months and highest in May and June. Comparing United and American airline, there where no weather and security delays. Also, for United airline, National security delay occurred in February, April, May and December with 0.1 hour , while for American airline, it occurred in February, May, and December . 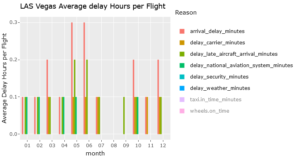 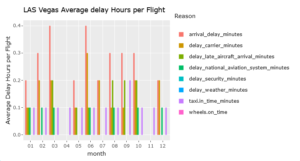 The above bar charts show flights delay reasons based on airport origin. the  above left plot shows Louis Armstrong New Orleans international airport (MSY); no delays in August , while January, February, April, July and November shows lower delay hours of 0.1 while May and June shows highest delays of 0.3. For Miami International airport, lowest delay by reason occurred in January, while March and June had highest delay hours of 0.4. 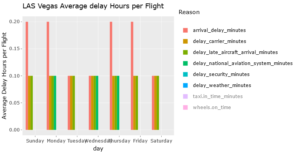 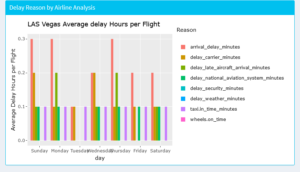 From the upper left visual , which shows flights delay on a weekday basis, most flights delay occurred on Sunday, Monday, Thursday and Fridays by all reasons of delay with arrival delay been the highest at 0.2 , while the other delay reasons are the same for all days of the week with 0.1 hour.

Looking at origin airport, arrival delay and late aircraft arrival accounts for the highest and occurred everyday of the week except on Saturday. It is also, seen that Saturday accounts for the lowest delay.

With this insights, management and passengers now know that arrival delay and late aircraft delay accounts for the most delays and Saturday has lowest delay hours compared to other week days. Weather and security delays where minimal . The above analysis, can help passengers plan their travel in other to reduce delays by helping them arrive at their respective destinations on time and airline/airport management can use these insights to make effective decisions by implementing good policies geared towards reducing delays, and eventually reduce cost and increase passenger loyalty.

I live in Columbus, Ohio; working as a Data Analyst
View all posts by [email protected] >