There are the fanatics. Devin Cunningham ate Chipotle 425 days in a row (and is in better shape than you). Andrew Hawryluk pledged to eat Chipotle every day for Lent and then continued eating Chipotle for 186 days. Mark Rantal gobbled down Chipotle for at least 109 straight days.

Then, there are the more casual devotees. Chipotle’s offered rewards to their addicts with their summer Chiptopia promotion and had to pay out over $20 million.

As a frequent eater of Chipotle in New York, I’ve always noticed that the price of burrito is much less than Chipotles in my hometown in the Chicago area. There is some limited discussion on the web about Chipotle price variance, but there hasn’t been a rigorous look at it.

Curious about price differences, and with the super fans in mind, I decided to take a deep dive into Chipotle data.

With some help from a couple undocumented APIs with info on Chipotle online ordering prices and food shortages, I’ve been able to get an almost complete set of data on Chipotle restaurants. (I've pricing data f0r 2,176 Chipotles. The data was collected on Jan 9, 2017. Their Q4 2016 reports states they operate 2250 restaurants.) I’ve complemented this dataset with Yelp rating data ( as of Jan 27, 2017), sale tax data, cost of living data, US Census data, and CPI data.

How Do Chipotle Prices Vary?

Burritos, burrito bowls, and salads of the same meat/non-meat  —  the different forms of the burrito — always have the same prices at each restaurant. However, across restaurants, menu item prices vary geographically and based on meat/non-meat type within the United States and internationally.

In the U.S., Chipotle generally has three different prices at each location 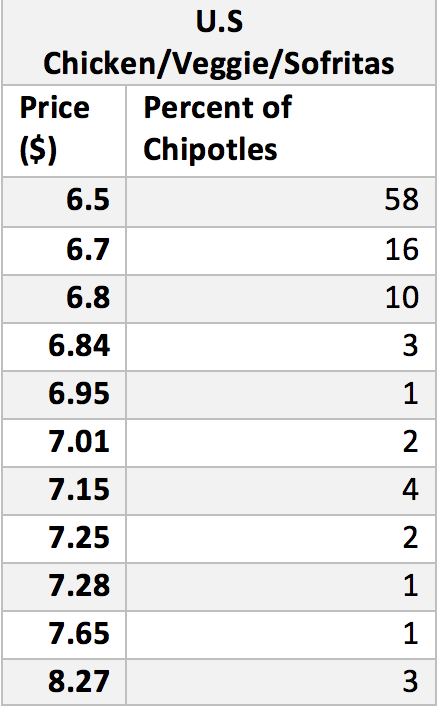 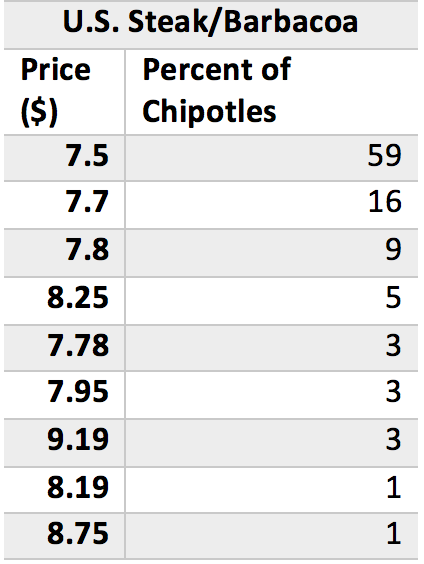 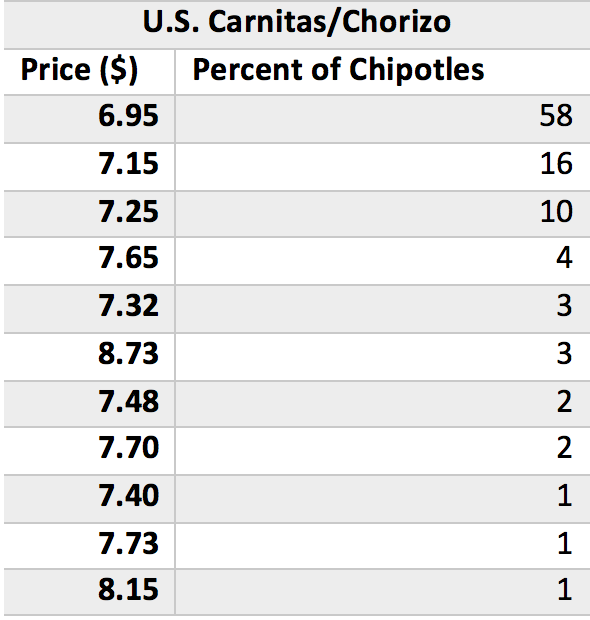 Below is a map of the median steak burrito price by U.S. county. 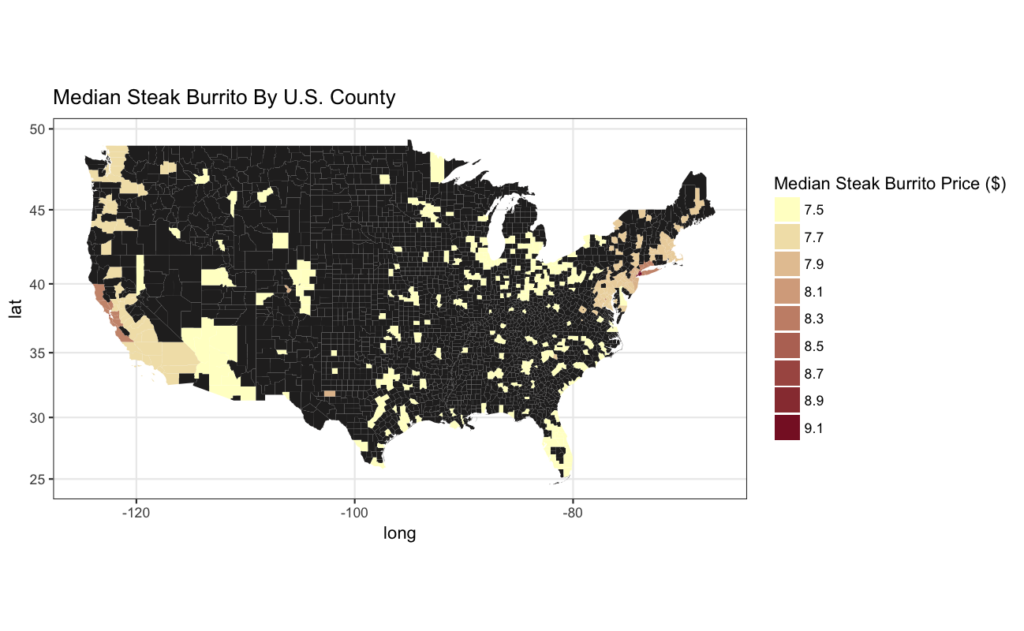 The Midwest, Mountain West, and South generally charge the lowest price, $7.50, for a steak burrito. Some exceptions: Chicago, Midland and Odessa Texas, and Cincinnati all charge $7.95.

Higher prices appear in the Northeast. New York City's steak burrito costs $9.19, the most expensive burrito in the U.S. Long Island and Southwest Connecticut charge $8.25 for a steak burrito.

Chicken and pork burritos generally follow the patterns of the steak burrito.

Where Does Chipotle Have Food Shortages?

Chipotle has two ongoing food shortages: pork in the United States and chicken in Canada.

Some Chipotle locations serve pork from the UK that doesn't meet all of their food standards. This message is displayed when a user visits the page:

FYI This restaurant is currently serving carnitas made with pork that meets or exceeds all of our animal welfare standards, but not all facets of our antibiotic protocol. For details visit: chipotle.com/carnitas

The pork shortage is an issue in some parts of the Midwest, South, and Northeast. 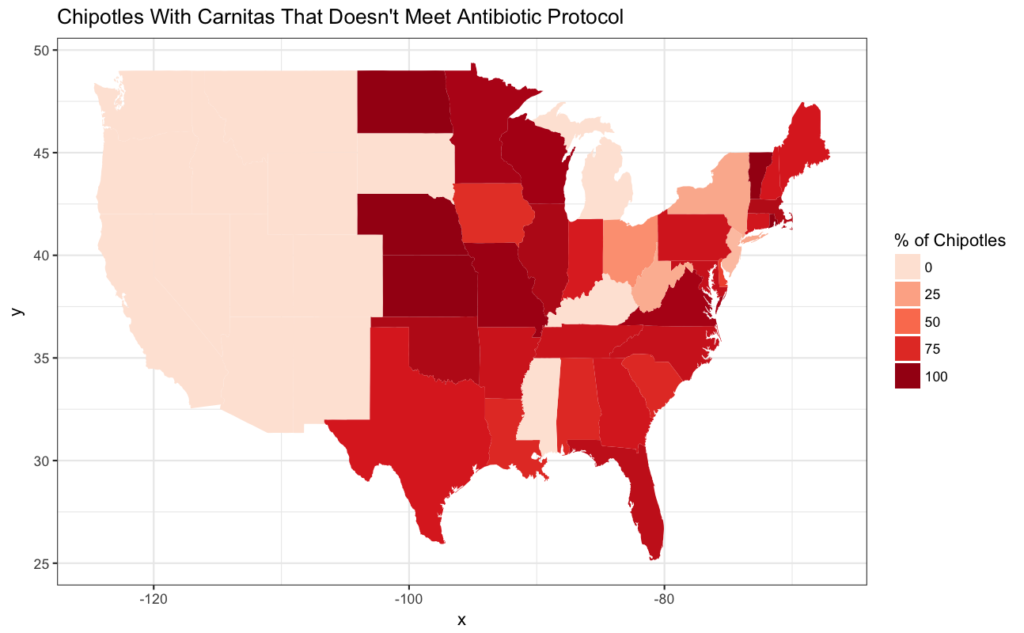 Fourteen of seventeen (82%) locations in Canada have a chicken shortage. These locations display the message, "FYI This restaurant is currently serving conventionally raised chicken. We'll be back to our unconventional ways ASAP."

What Is The Best Chipotle In The World?

In order to determine the best Chipotle in the world, I gathered Yelp ratings and sales tax data to complement the Chipotle pricing data. My best Chipotle would have the lowest price while accounting for sales tax along with a high Yelp rating.

Based on a review on all of the Chipotles, I've determined that the Chipotle in Billings, Montana on 1601 Grand Ave is the best.

Of course, the best chipotle depends on your subjective preferences. You can explore this further in the "Where Is The Best Chipotle For Me?" section of my Shiny app.

So why do these Chipotle prices vary?

For simplicity, when focusing on different prices, we will just look at steak burritos. For the most part, menu items prices change together, so a model for steak burritos should match other burrito prices.

There is a clear regional differences in price, especially in New York. 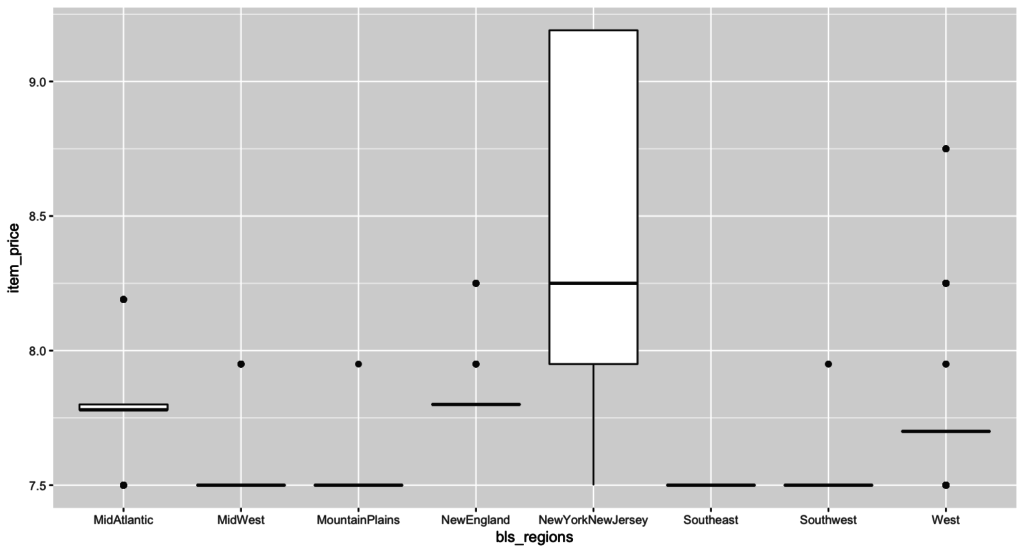 Prices also vary based on housing price, population, and other factors.

The model has an adjusted R-Squared of 0.753 and appears to be an ok fit for the data.

You can view my code for this analysis in the following repo: https://github.com/livejake/chipotle_analysis/

indian March 27, 2017
Undeniably consider that that you said. Your favorite reason appeared to be at the internet the simplest factor to consider of. I say to you, I certainly get annoyed whilst people consider issues that they plainly don't know about. You controlled to hit the nail upon the highest and also outlined out the whole thing without having side-effects , folks could take a signal. Will likely be back to get more. Thanks http://bit.ly/2lZh8pz