Whether you are a home buyer, home seller, or a house flipper, purchasing and selling a house is a major life event. It requires not only a pile of legal documents but also a huge lump sum of money. Many people work years to save up for down payment, and mortgage ends up being the largest expense month to month. Thus, extra caution and care go into analyzing house prices and data to avoid either buying high or selling low.

To gain more insight into how house prices are determined, we decided to look at house price data in Ames, Iowa compiled by Dean De Cock. The data contained 79 explanatory features describing various aspects of residential homes such as square footage, neighborhood, and many condition and quality measures in different parts of a home, including kitchen, pool, and basement. The goal of this analysis was to:

The data set included a plethora of house features including 1,460 observations along with 79 variables (which included 'sale price', which is the target variable in this analysis). In order to look at a cleaner set of data, we decided to perform some feature selection, feature engineering, imputations, and outlier eliminations.

As we were looking through all of the features, we realized that there were many single-valued features. We decided to drop the features where the largest category of the feature encompasses at least 90% of the data. Our choice for doing so rests on the assumption that adding these features would not provide much additional information to the machine learning models. This resulted in dropping the following nine features:

We checked our assumption in re-running some of the models by including these nine features. Including them did not improve our predictions. We also created additional features by combining separate features:

Since we were planning to use tree-based models using the scikit-learn library in Python, we needed to apply encoding to categorical variables. So ordinal encoder was used for ordinal features (where the numerical order matters) to capture the relationship between values within the feature, whereas target encoding was used for non-ordinal features.

We then looked at null values in the data. We had to be cautious dealing with them because many of the "NaN" values in the original data meant that the observation actually did not have a certain feature (pool, basement, etc.). So we first determined which features can have true null values and set them to be "None". After that, we imputed the remaining missing values as follows:

Once imputations were completed, we created scatter plots of the features that we thought would be important (TotalSF, TotRmsAbvGrd, YearBuilt, LotArea, OverallQual, and SalePrice) as shown in Figure 1. 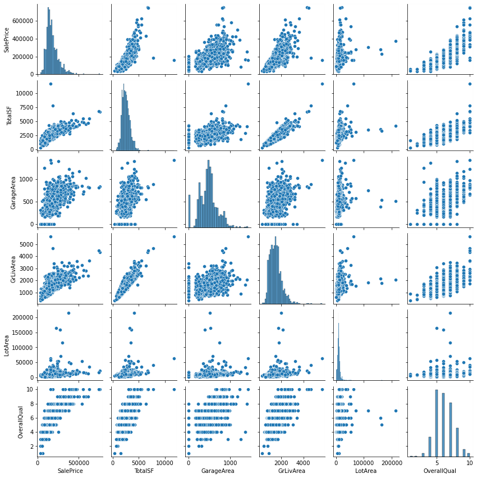 We saw some outliers on the TotalSF and LotArea columns and decided to remove the outliers by taking out whenever TotalSF was over 7,500 and LotArea was over 10,000, which resulted in excluding six observations. The updated scatter plot with the outliers removed is shown in Figure 2. 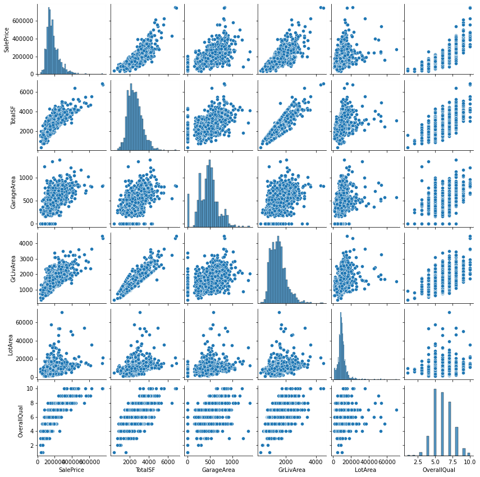 Lastly, we created a Pearson correlation matrix using features that had a correlation with SalePrice of more than 0.5 as shown in Figure 3. All observations were very intuitive, but the following were some highlights: 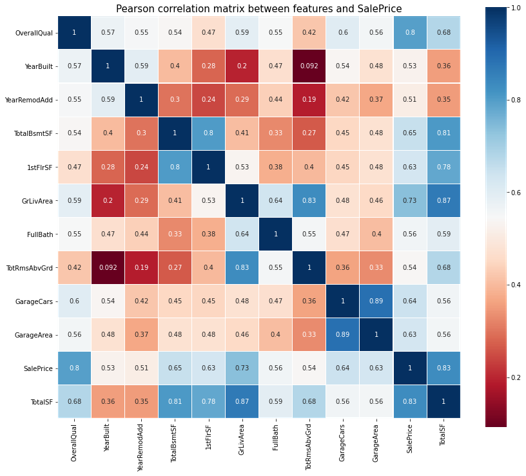 Given a large number of features in the data set, we decided to focus mainly on tree-based models. We did experiment with some linear modeling initially, but the performance was much worse than tree-based models. So for the analysis, the following models were used:

Since the data set has a limited number of observations (only about 1,400), we decided to perform a 5-fold cross-validation for all models. Also, because the models had many parameters, hyperparameter tuning was performed through Bayesian optimization based on the “hyperopt” module since it had a much shorter runtime compared to traditional grid search. When we were comparing the final model results, root mean squared error (RMSE) between the log of the predicted value and the log of the observed value was used. The results of the six models are shown in Figure 4 below.

Then we tried some extra tests as follows:

Lastly, we looked through the feature importance of each of the four models (excluding meta learners). We defined a feature to be important if it is at least 10% of max feature importance in the model and Figure 5 below shows the result for each model. 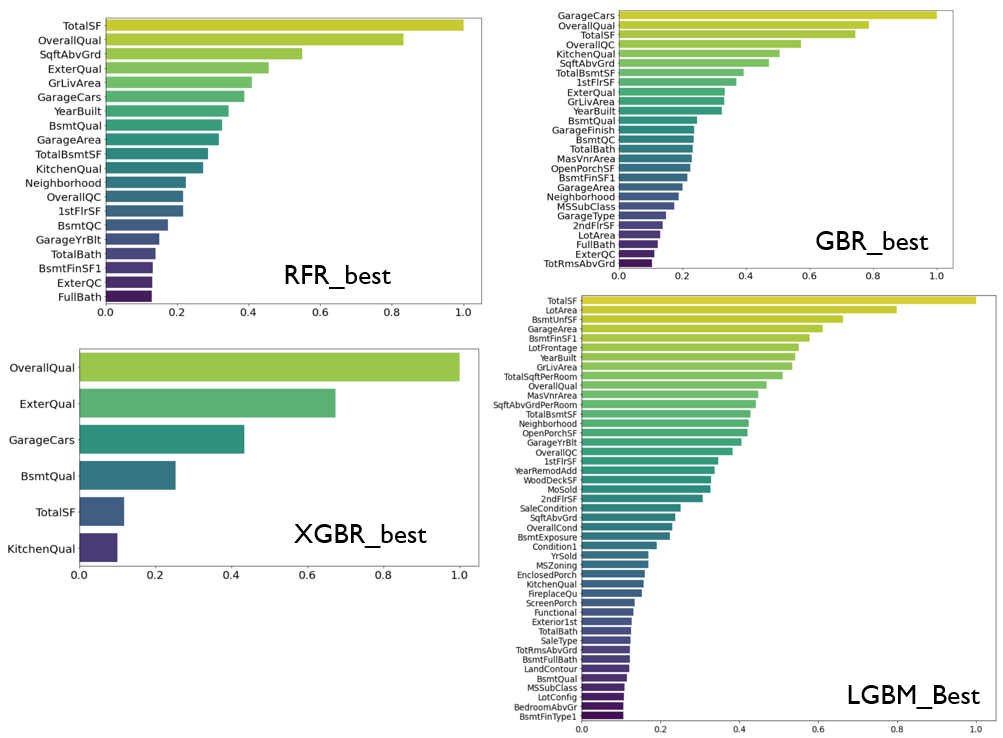 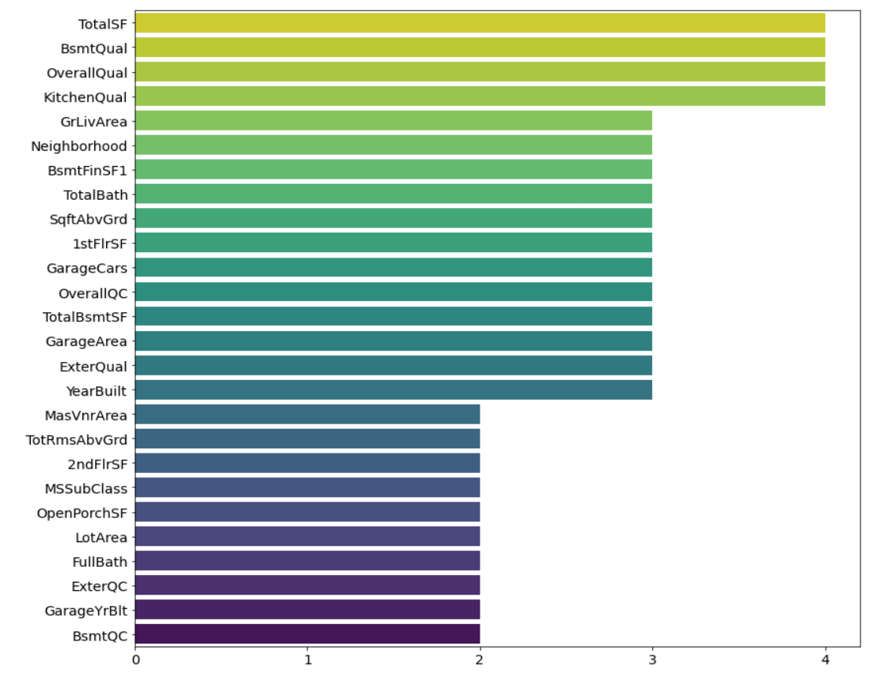 Narrowing down the most important features even more by taking features that appear 'important' in at least three models, a Pearson correlation matrix was created as seen in Figure 7. Observations from the matrix were as follows: 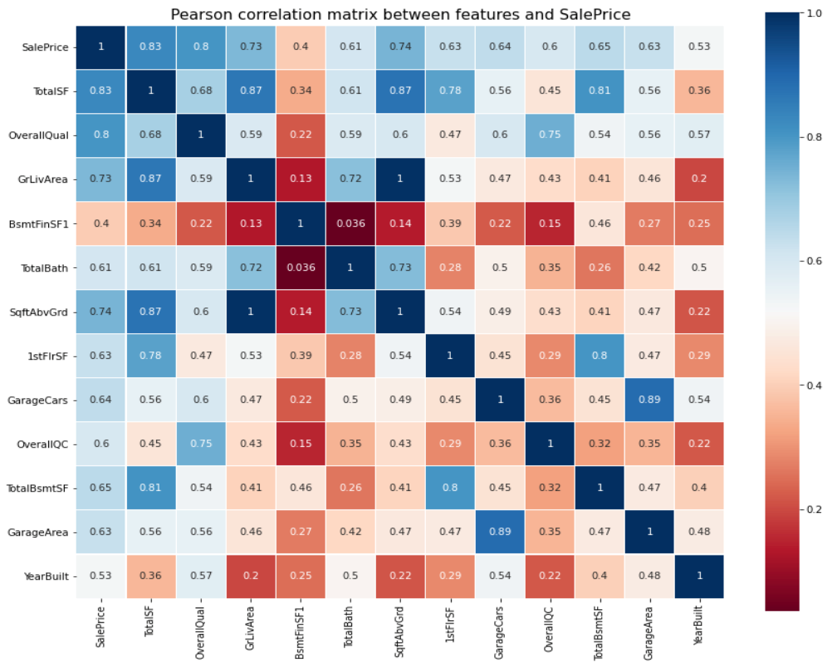