Moyi Dang took Data Analysis with R - Intensive Beginner Level with Vivian Zhang in May-June, 2014. This post is based on her final project for the class.

**note: you can click on the pictures for a clearer image

With the power of R, I wanted to run some regressions on the universe of all listed companies in the world, and identify the 20 most undervalued companies, and the 20 most overvalued companies, if one has the freedom to pick them anywhere in the world. At the end of the post I will show you the results, but remember that these are not stock recommendations, just 40 names spit out by a regression. 🙂 Regressions can be powerful tools but it might just be a starting point for further research.

I got my raw data from Bloomberg - there are a total of 53,776 companies in total - these include only the "primary tickers" of a company, and are restricted to companies that currently have market cap data - so for example if a stock is currently suspended it would not have market cap data and would not be included in the data set. I also converted all financial data into US dollars, for ease of comparison across countries.

Then I picked out 11 metrics to describe these companies:

Then, I got the valuation ratios and the past one year return. I plan to run a multi-variate regression using the above 11 factors against any of the variables below:

But before getting into the regressions, here is a visualization of the data set: 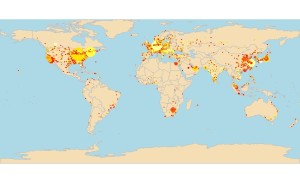 To make this map, I first need to get the longitude and latitude of the location of each company. To do that, I got a very comprehensive list of cities in the world and their lat and long from: http://dev.maxmind.com/geoip/legacy/geolite/. Then I merged that with my data set.

Once I have that, I just used mapBubbles from the rworldmap package.

Here is my code:

Now onto the regressions.

I ran the below regression code for PB, PE, EV/EBITDA, and One Year Return:

It turns out that PB resulted in the most factors having significant p values. Also the p values of each factor varies widely by region. To find a way to visualize this, I decided to use the star plot / radar chart. I don't think this is a very well known type of chart - so if you're unfamiliar with it here is a description:

Anyway here it is - the significance of the ten metrics as a predictor of PB separated by region of the world: 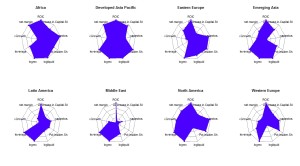 The plot is generated using radarchart in the fmsb package. Here is my code:

For the sake of illustration, here is the same plot generated by regressing One Year Return - you can see that the regions are much smaller, so not as statistically significant:

(But interestingly with the exception of Africa. So if I had picked African stocks one year ago based on these 10 metrics, I might be happy right now!) 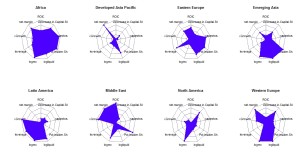 This diagram is done by first splitting data by country using ddply, and then using treemap from the treemap package. Here is my code:

Here is the diagram for overvalued companies by country. I'm surprised by the size of Taiwan here - it is also not so small in the undervalued diagram. I checked this and it turns out there are 1773 companies based in Taiwan in my data set. That's a lot of companies but why does it rival the US here? One reason I think is that this diagram doesn't include any companies where the residual is NA (error), so maybe Taiwanese companies generated less errors... anyway maybe this means something, sell Taiwanese stocks? 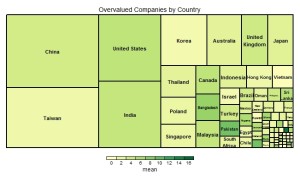 Here are the undervalued companies by sector: 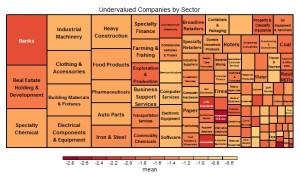 Here are the overvalued companies by sector: 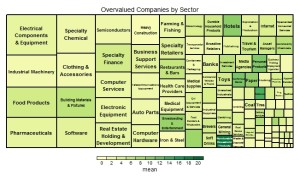 Now for the moment we've all been waiting for...

...according to this regression 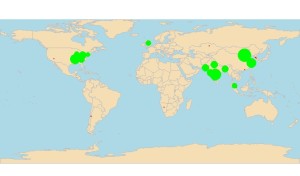 View all posts by Moyi Dang >