Soccer, in my opinion,  is not only  the most popular but  the  best sport in the world. I always wake-up early on Saturday and Sunday mornings to watch the  matches on television. I love the emotion, the skills, the drama, and everything about it.

How to Use Odds to Predict Soccer

That is why for my Capstone project, I wanted to find out if I could create something of value from the numerous hours I have devoted to watching my favorite sport. I decided to create a shiny app in order to visualize the data and use the numerous machine learning algorithms I had learned in an attempt to correctly predict the outcome of soccer matches. Below I describe where I obtained my data, the data cleansing, feature selection, interactive plots of the data, and the algorithms used to predict the outcome of soccer matches.

I was able to identify a comprehensive data source of football matches on Kaggle. The data source was a .sqlite file which contained 7 tables:

Using the RSQLite library, I was able to transfer all the tables to a R file and into a data table.

When given a new data set, the first check performed is the number of missing inputs in the raw data. As we will see in the figures below, missingness was a big issue, especially with the match, team attributes and player attributes table. Either the data had incomprehensible information or the data was missing.

The figure above contains a description of the missingness in the player attributes table. The histogram on the left is a percentage of data that is missing per feature. The plot on the right is a grid that shows the combination of features most prevalent in the data with red indicating features that are missing and blue signifying available data. So we can see that for a big portion of the data, ~98%, there is no missingness (all the features area available). Although a small percentage of some features are missing in this table, it is still something we will need to handle in order to not blindly throw away observations.

As we can see from the figure above, only one feature from the team attributes table is missing a significant amount of data. There are more observations with that data missing than not, and since each team is different, it does not make sense to replace the missing observations within the feature with a mean value or a randomly imputed value.

For each company, it appears that if one of the observation is missing (odds of winning, losing or drawing a game), then there is a good chance that the remaining 2 features will be missing. In that case, we can say that the feature (odds of winning, losing and drawing a match) is missing at random (MAR) since the probability of one of the odds feature missing depends heavily on the availability of the remaining odds.Since the remaining combination of missing data appears to be random, we can conclude that  the remaining missing features are missing completely at random (MCAR) since the probability of a value missing does not depend on another feature value (MAR).

Also we can definitely rule out missing not at random (MNAR) since the feature value itself has no bearing on whether or not the value will be missing. As we will discuss in the upcoming section, a lot of the betting features from different companies are highly correlated with one another, so we can drop certain features without losing significant information. This allows us to keep more observations and prevent any bias that might have been introduced from dropping observations with missing data.

Since the match table will need to be merged with the player attributes table and team attributes table, it is vital to select the right features from the three tables in order to decrease the number of observations with missing data and to develop custom functions to properly handle missing values rather than using mean imputation, random imputation, or some form of regression imputation.

To perform preliminary feature selection that accounts for missing data, I decided to use a correlation plot to find the correlation between all the features in their respective tables. If two or more features are highly correlated, then there is a good chance they carry the same information. Consequently, I would only need to pick only one of those features. 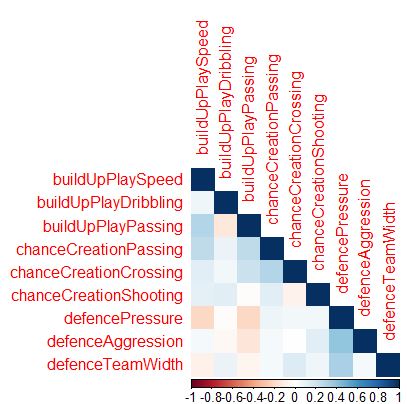 From the figure above, we can see that although there is some correlation between the attacking and defensive attributes in the team attributes table, none of the features were highly correlated with one another. I decided to merge all the features from this table with the match table. As I still had to deal with the missingness with some features, I decided to write a custom function that performed in the following manner: 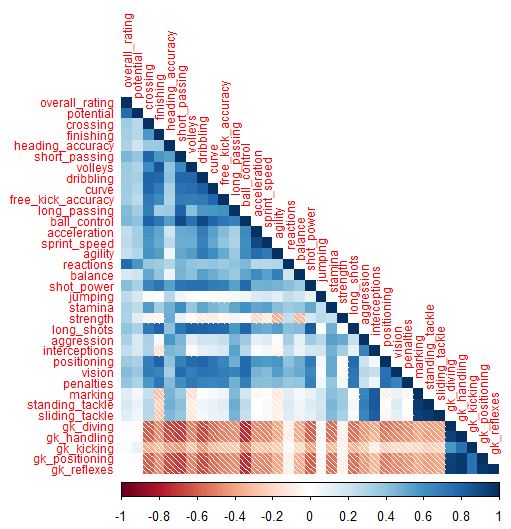 Another reason I decided to use only the overall player ratings feature was to avoid piling on too many features.Each player, per year had a corresponding value, and as each team has 11 players, selecting only one feature from this table would translate into adding 22 features to the match table (home and away team per match). So if each player had two features from the player attributes table, it would double to 44 features added to match table.

As different players would need different features (attackers to attacking features, defenders to defenders features, etc.), it made sense to use overall player ratings for now and based on model results, see if adding more features would lead to improved results. For the player attributes table, I performed a slightly different custom function in terms of identifying and replacing missing data: 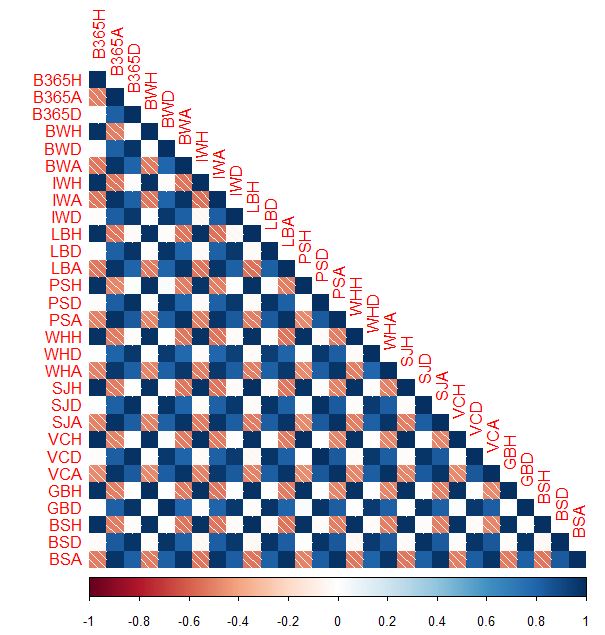 Even all the odds related to the match ending a draw from different companies are highly correlated with each other. Due to this I decided to use only the odds from the betting company B365 because it  was the one with the least missing data. Some features also contained garbage information (incorrectly scraped from respective websites) so I dropped those features from match table.

For the data visualization section, I decided to create a shiny app that showed trends of wins/losses/draws for each team, home and away from 2008-2016, trends of the team attributes from from 2008 - 2016 and a box plots highlighting the overall ratings of the 11 players on each team from 2008 - 2016. Rather than highlighting only one league, the user will be able to look at the English, French, Belgian, Spanish, German, Italian, Netherlands, Scottish, and Portuguese leagues to see which teams had the better most wins per year, the ratings of their players and of the overall teams.

I decided to create models that predict the outcome of the home team winning/losing/drawing a game. This is a multi-class classification problem since there are three outcomes, win (W), loss (L), and draw (D). Below is the distribution of classes.

The win category has almost twice as many outcomes as the other classes, so this is something we will need to be wary of, especially when splitting for a train-test. We want the train and test set results to be similarly distributed. To do this, I used the createDataPartition function in the caret class. We should be wary of this distribution of classes since predicting a win always provides an accuracy of 46%. Consequently, any model that we build needs to be better than this accuracy. For analyzing the results, I will be using the following metrics:

Although having all parameters above as high as possible is the best case scenario, I will be tuning for overall accuracy because it does whether the result is a win, draw, or loss. All that matters is correctly predicting the outcome of the soccer matches.

For my first model, I chose xgboost because  it is quick, works well with classification, and does not force the model to assume a certain shape like regressions of all types. For xgboost, I used a 10 fold cross validation with the following parameters:

After 10 fold cross validation, I ended up with the following parameters for xgboost:

One thing I noticed using xgboost was that removing the individual player ratings as features had negligible effects on the results of the model (those features essentially had little variable importance values). I reran the model with the grid provided above and arrived at the same optimal parameters mentioned above. After training and testing the model, I obtained the following results:

Right away we can see that the overall accuracy is better than the null case. It also appears that since the win category almost doubles the other categories, the model is predicting a lot of wins when the results are draws or losses (high sensitivity and low specificity).

Next I decided to use neural networks from the nnet library. Although I am able to use neural networks which is fast and has a history of being very accurate, the downside of the nnet library is that it allows only 1 deep layer. Again I tried this algorithm with and without the individual player ratings, and I got extremely similar results. I trained the model with 90% of the data, and with no player individual player ratings as attributes, I obtained the following results:

The results obtained from this algorithm perform better than predicting all matches as wins, but it is not an improvement on the results of xgboost. There is a slight improvement in the specificity for Win/Draw category, but it is still very poor. This again is due to the fact that the distribution of the results is heavily weighted towards the win category (high sensitivity, low specificity).

Rather than using only one algorithm, I decided to use a stacking method that used the following optimized algorithms to create meta features and use those meta features along with the initial features presented as inputs to an xgboost model:

Once the meta features were created, I used xgboost to predict the results of the matches and got the following results:

Although this model performed better than predicting all wins, for its complexity, it is not an improvement on the results obtained from using only xgboost and neural network algorithms.

For this project, I collected data from Kaggle, cleaned it up to deal with null cases, merged certain tables, and performing feature selection in order to visualize the data and perform some machine learning algorithms in an attempt to correctly predict the outcome of the soccer games.

Although many simple and complicated models were created to accurately predict the outcomes of soccer games, and we were able to predict better than the null case, it appears that the features need to be revisited in order to obtain better model results. We could consolidate certain features such as player attributes, or drop certain features to simplify model since model complexity. Another issue could be that more data needs to be collected to better reflect a more even distribution of the win/loss/draw classes. This could potentially assist in correctly predicting the outcome of the soccer matches.

Efezino recently completed his MENG in Mechatronics Design at the University of British Columbia, focusing on controls engineering. He now works full-time at an engineering consulting firm while enrolled in the NYCDSA's 2017 January to May online cohort,...
View all posts by Efezino Erome-Utunedi >

Tom March 21, 2018
The odds used for features are closing odds. As such they can't be used in reality to predict upcoming matches. I feel that because of this, the strong bias between these odds and home and away wins is a reason you don't predict many draws. Have you tested your model on future matches and if so could you provide some accuracy measurements?