Analyzing the Effects of Game Review and Price on Player Ratings on Gamespot.com

The video game industry earned more than $100 billion in 2017, and is poised to surpass that amount for the next few years. For game developers, such a huge market presents both opportunities and risks; the reward for a popular game is great, but an unpopular title could also potentially mar a developer's reputation to gamers. On the flip side, the explosion of game titles makes it increasingly difficult for gamers to choose the right games for their limited time and money. As such, gaming websites such as Gamespot.com have served as an intermediary for both developers and players, allowing developers to gain feedback from players regarding their games, and gamers to better judge the quality of newly released titles. One interesting question that rises from such websites is how much effect do reviews on Gamespot actually have on player ratings? Furthermore, do price of games play a role in how players rate them? Those are the principal motivations for my web scraping project. Eventually, I want to see if there is a way to predict the player rating of a game based on the official review on Gamespot and the price. Such an algorithm would give game developers a tool to determine the best price for the game to maximize player evaluation.

The two websites I want to scrape are Gamespot.com as mentioned above and the Steam website. Steam is an online video game store that also allows players to review the games they have purchased. I am scraping that site chiefly to get the pricing information for games. The rating system on Steam also allows for comparison of user ratings from Gamespot and Steam. To narrow the field of search and amount of data, I limited the genre of games to "strategy" and only PC games. The final results page for Gamespot and Steam are shown here.

Initially, I tried to use scrapy for both websites. Soon, I find that I am getting empty lists for all the Xpaths that I tried, so I had to resort to Selenium for the Steam website. From Gamespot, I want to scrape the following fields:

From Steam, the following fields are scraped:

One note regarding the rating system on Gamespot and Steam: on Gamespot, both the official review of the game and user ratings are scored on a scale of 0 to 10, but on Steam, the user reviews only gives whether the game is recommended or not, and the total score for a game is the percentage of users that recommended it. This scoring difference should be kept in mind when comparing ratings from the two websites. Once all the fields are scraped, the plan is to merge the data frames on "Title", so analysis can be done.

On the whole the scraping process was pretty straightforward. The only issue I ran into was on the Steam website some of the games had Japanese or Chinese characters in their titles, so when trying to write the names into CSV file, it would cause an error due to different encoding. Another issue is that due to some of the special characters used on Steam website, such as ™ or ©, the title of the same game would not match between the two websites. After several attempts, I incorporated code to clean the titles of any non-alpha-numeric characters, before writing to CSV.

While merging the two data frames, I realized that while the Steam page had over 10,000 titles, only around 250 of them matched those in the Gamespot data frame. Because of this, I decided to merge the tables in two different ways, left merge to preserve all the data in the Gamespot data frame, and inner merge to get only the common titles in one data frame. Because of the low number of matching titles, analysis involving price of games will be limited and not representative of overall picture for all games.

My initial inquiry into my scraped data involved analyzing some trends on the categorical data such as genre and developers. Within the overall genre of "strategy" games, there are many sub-categories. Looking into the average Gamespot rating of each category, it appears that there is a healthy spread of scores from 9 to 4. However, when we look at how many titles are actually in each sub-genre, only three genres ("Real-Time", "Turn-Based", and "Management") have significant number of titles, most of the rest of the genres have only 1 or 2 titles. The top 20 most prolific game developers and their average Gamespot rating is shown in figures below. 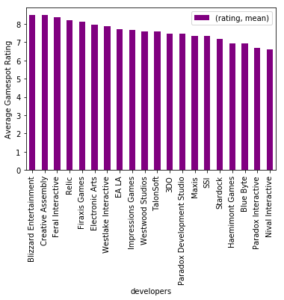 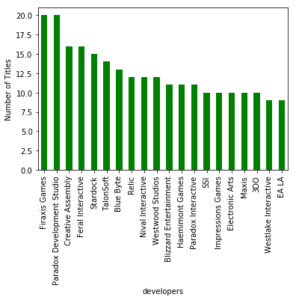 Top 20 Developers with Most Titles

Next I examine the relation between the Gamespot official and user ratings. Unsurprisingly, there is a large correlation between the two ratings, especially for scores higher than 8. For games with Gamespot score of 5 or lower, the user rating can span a wide range, showing larger variations. The looser spread of user rating for lower scores is understandable, as most people can agree when a game is great, but for mediocre games, users will more likely have disagreement over what makes it bad, or even if it is bad in the first place. The lower quality games will also bring out disagreements between the critics at Gamespot.com and users, as they may have different visions on what makes a game good or bad.

Similarly, the same trend can be found in the Steam vs. User Rating plot. Here, we again see the points are more clustered together at the higher ratings, and more diverged in the lower ratings. In the Steam vs. User case, we also see that the correlations is not as strong as in the previous plot. There are two reasons for this, one is due to the different scoring system the two websites used, as mentioned previously, the other is that for some games, there are no Steam rating available, therefore a score of 0 is used. 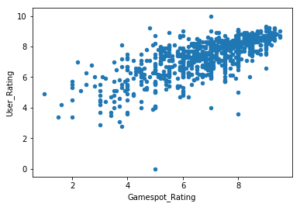 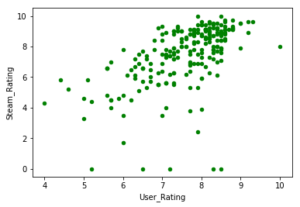 The plots for rating vs. price show more interesting behavior. At first glance, there seem to be no relation between the two variables. However, after looking through the data more carefully, I realized the reason for the apparent none relation. In my data set, there are a lot games that were released before 2000, thus the price being sold on Steam is very low, not reflecting the true price of the game when first released. The user reviews, however, are averaged over the entire time since the game's release. Therefore, plotting the two variables together as is can be misleading. Because of this, I decided to filter out all the games released before 2010, and see if we can see a clearer relation between price and game rating.

After the filtering, we can distinctly see a clearer correlation pattern between user rating and price. The other two ratings, Gamespot and Steam, don't have as clear a correlation to price as user rating, but still show improvement when the date filtering is applied. Calculating the correlation matrix between the variables before and after the filter further illustrates this point, as the correlation factor between price and the three ratings went from around less than 0.1 on average to around 0.3 on average. The correlation between user rating and Steam rating also increased. Viewing the post-filter user rating vs. price plot in more detail, one is tempted to perform a linear model to quantify the relationship between the two variables. In fact, I did make such a model, and calculated a slope and intercept for it. I even performed a T-test to show that the slope I got was statistically significant. But upon further reflection, it became apparent that such a model is ill-suited to the present situation. The main reason being that it's unclear that the relationship between these two variables should be linear, we just don't have enough sample to support such a claim. 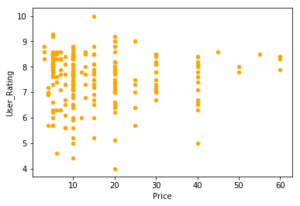 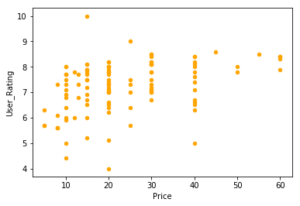 From the extent of the analysis I performed for this project, we can definitely say there is correlation between Gamespot official review and user reviews. The Steam user reviews, due to a different scoring system, and much larger number of reviews, show much more diverse and unpredictable correlation behavior. We also found some correlation between price of games and user ratings on Gamespot. Such correlation is found to a much less extent in Gamespot and Steam reviews. Unfortunately, due to the limited data collected, it is difficult to draw more quantitative conclusions beyond what I have done so far.

In doing the project, I realized how inadequate my data set is. In particular I was surprised at the low matching rate of the titles on Gamespot and Steam websites. Because of this, I was only able to obtain pricing information for a minority of game titles, making analysis difficult. There are several reasons for this, one is that not all games are currently available on Steam, another is the sorting algorithms for the two websites can be different, thus even though I use "strategy" games as my filter on both sites, they do not return the same set of game titles. To make more concrete conclusions regarding the relations between the ratings and price, I will need to collect more pricing information on game titles. Since Steam has proven to be unreliable in this respect, I will try different websites to obtain that information in the future. As for my overall goal of making an algorithm to predict user rating, I will also need to include data from all kind of game genres, not just strategy games. I hope to complete this step in the future.

I have a PhD in Physics from UC Irvine, following my B.A. degree in Physics and Mathematics from NYU. My main interests in data science are understanding and improving machine learning models and algorithms. I hope to learn...
View all posts by Arthur Yu >