Anime, the abbreviated pronunciation of "animation" in Japanese, refers to animation from Japan. Its style is often characterized by colorful graphics, vibrant characters, and fantastical themes[1]. As someone who watched lots of anime growing up, I turned my sight to the largest anime and manga database and community - MyAnimeList.net.

The website is scraped with Scrapy, a web crawling framework written in python. Contents from different pages were scraped, including information about 89,244 reviews, 5,953 anime and 3,550 directors, voice actors, and musicians.

Contents Scraped from web pages on MyAnimeList.net: anime review, information about the anime and the staff/cast.

MyAnimeList.net was founded in Nov 2006; its number of users keeps growing and so is the number of the reviews. As of September 2016, over 2000 new reviews are posted online per month. The most reviewed anime on the website is "Sword Art Online", an adaption of a 2009 Japanese light novel series. The series takes place in the near future and focuses on various virtual reality MMORPG worlds. The figure above shows the number of reviews posted  through time. It is interesting that the spikes on the curve coincide with the air dates of the anime and its sequels: its premiere in summer 2012, the first season finale in Dec 2012, a short movie sequel in Dec 2013 and a second season starting summer 2014, even the recent news about season 3 and a new movie project. 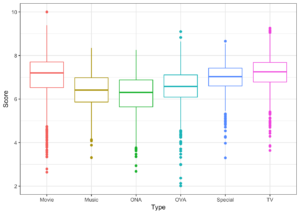 The box plot above illustrates how the scores of anime differ by their type of production. The anime produced as TV series or Movie tend to have better scores than the ones produced as OVA ("Original Video Animation", i.e, direct-to-DVD), music videos, and special (short films, commercials, etc.). The anime produced as ONA ("Original Network Animation", i.e, through video streaming websites) usually has lower scores than other types. 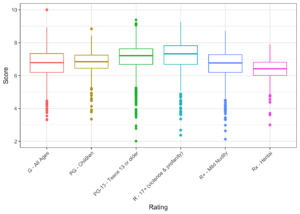 The box plot above the differences in scores between different ratings. Unlike comics in the US, the topics of anime are much broader and therefore it has ratings more analogous to TV and Movie. The highest scored anime often has "R - 17+" or "PG -13" ratings. 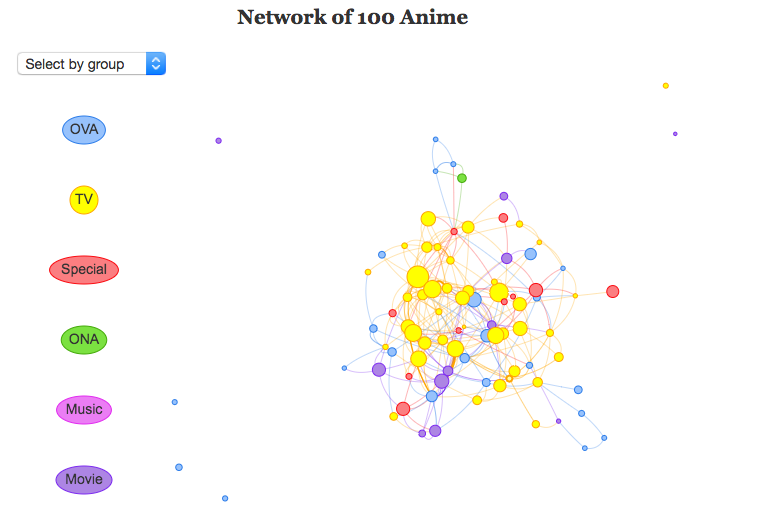 The network graph depicts the connection among randomly-selected 100 anime from the 5953 anime in the data set. Each node represent an anime colored by its type. The size of the nodes are scaled to the viewer numbers. The links between nodes indicate whether there are common staff or cast members on both anime. We can observe that most of the anime are connected in the graph, and the ones isolated from the main cluster tend to have low viewer numbers.

What determines the viewer score of an anime? Which one is better, a 110-episode TV series or a 90-minute movie? It's not easy to answer since anime have so many different production type. From the data collected, I built a model using a random forest method to predict the score of an anime from its type, rating, viewers, favorites, director, voice actors, and musicians. The number of favorites on MyAnimeList.net are used as a "score" for different directors, voice actors and musicians who worked on the anime. This model explains 63.99% of variance in scores of anime and rates the importance of variables in the plot below. It appears that type and number of favorites contribute most to the score, followed by number of viewers, rating and voice actors; director, and musician seem to be less important. 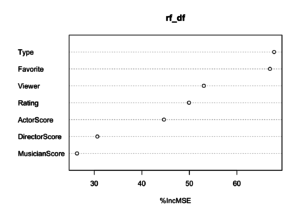 In this work, I scraped information about 89244 reviews, 5953 anime and 3530 director/voice actor/musician who worked on these anime. We demonstrated the relationship between the trend of an anime with its number of  reviews, and the connections between different anime's staff and cast crew. In the end we also built a model to predict the score of an anime from the data we collected. The codes of this project are here.

result sd September 8, 2019
Itâ€™s going to be end of mine day, but before ending I am reading this enormous post to improve my know-how.

hasil semua togel August 16, 2019
Wow, thatâ€™s what I was exploring for, what a material! existing here at this webpage, thanks admin of this web site.

米拉奇战记 Miragine War MMO July 26, 2017
Do you mind if I quote a few of your articles as long as I provide credit and sources back to your site? My website is in the exact same niche as yours and my users would truly benefit from a lot of the information you present here. Please let me know if this alright with you. Many thanks!