The Association of Tennis Professionals (ATP) is the premier professional men’s tennis league and is one of the largest sporting leagues in the world. The ATP grand slam tournaments holds incredible amount of international viewership, with 2017 Wimbledon’s record setting gentleman’s finals at 6.4 million viewers broadcasted on BBC alone. Being an international sport with such a following, the industry for tennis is growing larger and larger as the sport continues to grow in popularity and with it comes more money.

Tennis has the highest prize money for any individual sport in the world. Roger Federer, arguably one of the best players of all-time, has accrued a career $104 million dollars in prize money alone. Huge players like this garner an unbelievable amount of attention on and off the court. These top tier players dramatically dictate the day-to-day ticket sales at tournaments as fans are much more willing to pay the extra money to see their favorite players. With such an international impact, the incentive for companies to endorse said players is particularly weighted towards the top. This means too that finding a young up and coming Roger Federer is incredibly valuable to any company that might be interested in marketing towards the tennis community or just person of large influence, like Federer, in general.

Like all sports, the incredibly vast amount of data has revolutionized the way we look at sports and tennis is no different. Looking at match history and particular match statistics alone, the goal of this project was to investigate the trends of the great players of the recent past in comparison to the rest of the ATP and use the trends to compare with young players to see if one could possibly identify the next young, up and coming tennis legend.

Author and entrepreneur, Jeff Sackmann, who has worked in the fields of sports statistics created a website called http://www.tennisabstract.com/. This website contains a consistently updated database of all tennis matches that date back to 1968. Unfortunately, important match statistics like aces, breakpoints, and other more specific match data were not being recorded in the ATP until the start of 1991.

First and foremost, one needs to get their bearings straight in the context of league stats in order to be able to identity how much better a top tier player is in comparison to league averages. For instance, league leaders since 1991 in win percentages were looking at percentages of around 80 percent, while the league average sits somewhere around just less than 50 percent.

Figure 1. This is histogram plot of the count of players (y-axis) of a particular winning percentage (x-axis) from matches from 1991-present day.

Because career win percentage is such a great identifying stat for strong a player, we might then be curious in how might other statistics relate to winning percentages to get a feel for what other statistics might be important to compare. One of the most interesting statistics and possibly surprising to some is the apparent positively related relationship between a player’s height and win percentage as seen below. 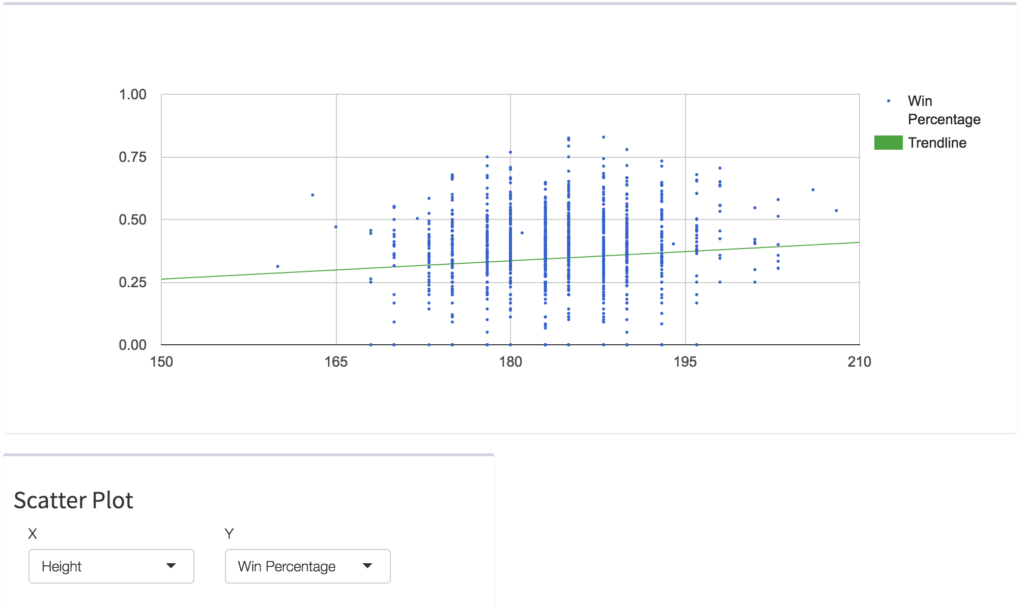 Figure 2. Scatter plot of player height (x-axis, in centimeters) and win percentage (y-axis) across all players from 1991-present day. The linear fit trendline indicates a positively, direct relationship between height and win percentage.

Player Comparisons – The Importance of Surface 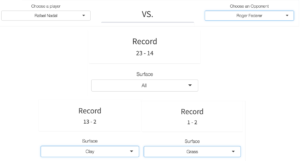 Having developed an intuition for how league leaders’ statistics might look, one might be interested comparing how particular players matchup against each other. One of the most notable rivalries in the recent past (and potentially of all-time) is that of Roger Federer and Rafael Nadal. Initially one might argue that it is clear from the match record that Rafael Nadal is the better tennis player with an overall record of 23 – 14 over Roger Federer.Image of the different records of Rafael Nadal and Roger Federer's record on different surfaces. However, Nadal is famously a clay court dominant player, while Roger Federer’s surface dominance is stereotypically on grass. Interestingly enough, the two have only played on grass three times and Federer is leading that record 2 – 1. Meanwhile, on clay Nadal is far more dominant with a record of 13 – 2 over Federer. Furthermore of a hard court surface it is clearly a more neutralizing surface where Federer leads Nadal 10 – 9. Given this information, I find it inconclusive to say that one is clearly more dominant than the other because they have not played enough matches of grass to really tell if Nadal is truly the “better” player. Typically, to be the best a player must be dominant across all surfaces, but when comparing top players against each other, surface still matters. What this means for identifying a young players is that we have to acknowledge that dominance over opposing players of similar class is, in fact, not an immediately definitive trait that makes one particularly better than the other.

With this insight in mind, it is obvious that surface has an incredibly large impact on the success of any player, but aside from comparing which surface a player might prefer one very interesting thing that one might like to compare is the development of a player with age. Going back to winning percentage one could in fact compare the cumulative win percentage change of a player with respect to their age. This is very useful when we are trying to gauge the success of a young up and coming player in comparison to where previous young tennis stars were in their career as seen in Figure 4 below.

Figure 4. Plots of Rafael Nadal (on the left) and Roger Federer's (on the right) age (x-axis) versus cumulative winning percentage (y-axis).

Taking a step back, we can initialize our search for a successful player by understanding the culture of tennis in that player’s country. For instance, we know that the US has not had a dominant player since the days of Andre Agassi, Pete Sampras, and Andy Roddick as no American has won a grand slam since 2001. Furthermore, the overall winning percentage across all American players is than 20 percent from 2010 to present day. This means that across the board American tennis might be abundant in the ATP, but not dominant.

Furthermore, it can also mean that if one were to find an outlier and a young up and coming star from America, that player would in fact garner a ton of American support because there has not been a grand slam winner for so long. This would be highly valuable to say, a company in the US looking to market in America because they would know that the player, if he were successful, would also gain a lot of attention as a professional on and off the court.

It is only with the advent of data in tennis one can study this data from previous tennis stars and use these trends to attempt to identify the great tennis players for future generations. In order to predict trends of the best tennis players, one first needs to establish a basis for particular stats in the ATP. Once that basis has been developed, one can explore the dependence of those stats in relationship to each other. For instance, we notice that height clearly has a dependency on the success of a men's tennis player. This makes sense because the serve is such a powerful tool and the taller a player is, the easier it is to hit the ball down and with power into the service box. Having explored the different calculated stats and their relationships, one can start to compare individuals and their records with other players. The importance of developing a sense of a player's record and who they loose against is important because one can notice trends particularly when it comes to something like how a player performs on particular surfaces. Alongside a record we can observe trends of the player's stats throughout their coreer and notice trends in the context of the player's performance by country. All of this information is incredibly valuable in trying to develop an understanding for what makes a "great" player and then furthering those findings to identify young up and coming talents.

Here is the link to the companion, interactive shiny app developed for this project. In this app, one can explore each of the topics mentioned above in further detail can develop and investigate their own findings for ATP matches.