Sports betting is an estimated 95 billion dollar industry in America.  What information does the public use when they place bets, and how accurate are those decisions?. Is the collective public better at making predictions than an individual? When looked at as a whole, do betting patterns follow any trends? These questions led me to create a data set that was a combination of NCAA football game outcomes and the historical betting records for those games.

My goal was to explore the associations between money lines generated by casinos and the general public's prediction on the game to see how accurate that number was at predicting the final outcome of the game. The money line is a great metric for measuring public sentiment because instead of just saying "win" or "lose" it scales with the amount of confidence in the decision. I don't want this post to be about how the betting betting works, but basically, the more bets that are placed on a team to win, the further below zero the money line is. Typically the money lines on each team in a match are the same, but one is negative ( i.e. 1000 and -1000). 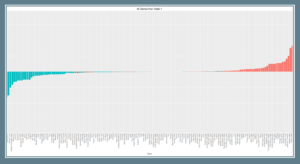 This visualization shows the money line for each team playing in week one of the 2015 season. The fill for each bar represents the actual outcome of winning (blue) or losing (red). Notice as the confidence in winner or loser increases, the number of incorrect predictions decreases.

My hypothesis was that as time progressed, betters would gain more insight to the conditions they are wagering on, there by becoming more accurate with their predictions.

My first comparison by week did not support this hypothesis. 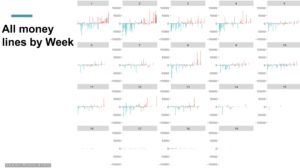 This is every money line plotted for each week of the season. The teams order is preserved along the x-axis. I had hoped that as time progressed, the number of incorrect and confident predictions would decrease, however it seemed like the opposite was true.

To try to explain the decrease in accuracy, I thought that by filtering out non-conference games, I would see less confidence and more incorrect predictions earlier in the season. 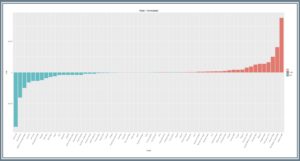 Attempting to clean up more lopsided games, I immediately disproved my hypothesis. Using only games from week 1 between what should be more evenly matched opponents showed that all confident wagers were correct, and any incorrect predictions were made with relatively low confidence. As seen below, prediction accuracy dropped dramatically over season. 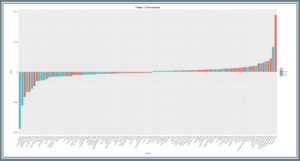 While there are innumerable variables at play here, it is still surprising to see how little the public actually learns as more information is gathered throughout the season.

In attempt to find a trend in weekly betting, I plotted the overall distribution of confidence by week. The only finding gleaned here is that after week 15, the confidence in predictions decreased. This is most likely due to the fact that these teams are matched at the end of the year and are designed to be as competitive as possible. 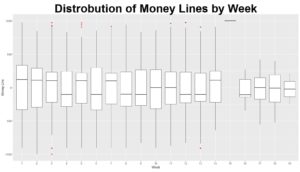 To further develop this study, I plan to add more seasons and other variables to this data set to study all of the situations where confidence was high and incorrect.

After receiving as B.S. in microbiology from Auburn University, I was hired by the Centers for Disease Control in Atlanta, Ga. There, I designed DNA-based detection and diagnostic tools to decrease public health costs and response times ....
View all posts by Jordan Waters >