Bitcoin - Does It Have Legs? A Visual Analysis

Bitcoin – Does it Have Legs? A Visual Analysis

Bitcoin has been in the news a lot recently.  As a digital currency, it has been the subject of investigations relating to legality of goods and services for which it is used as payment.  As a technology it has been under scrutiny regarding the security of the currency, and the initial application of blockchain technology which is of interest to industry beyond just digital currencies.  Despite the excess of speculation about its usefulness as a currency, and perhaps because of the associated hype, the value of the currency has been hugely volatile.  This post will provide a basic visual analysis of the effect of the volatility of the currency on the adoption of the currency as a means of transacting for goods and services.

Most of the necessary data for this visual inspection of relationships is available via Quandl.com, and is provided by Blockchain.info, a site via which one can view all of the transactions in the blockchain or central ledger in which all bitcoin transactions are recorded.  From Quandl and Blockchain.info, I chose to look at three data sets:

Unique Addresses: An estimate of the number of unique addresses used in bitcoin transactions, daily.  Blockchain.info chose to remove activity from the top 100 most active addresses, as activity from these addresses most likely should be excluded, for reasons beyond the scope of this post.

Total Transaction Volume: An estimate of the total USD value of transactions, with the same top 100 addresses removed.  As best I can tell, this is also separate from exchange-based transactions in bitcoin (the exchange of bitcoin for other currencies).

Total Transactions: An estimate of the number of unique transactions in bitcoin on a daily basis. Blockchain.info adjusts the total transactions for “change” that is returned to the original payer from the receiver of payment, which is present in most transactions.

Blockchain.info also provides a daily value for bitcoin vs various other currencies. However, for purposes of this study I wanted to find bar data (open, high,low,close). This can be useful in analyzing the true volatility of an instrument.  I was able to get this data from bitcoincharts.com, and chose to use data from the exchange bitstamp, which has had decent trading volumes and a long-enough history from which to construct bar charts.

A simple visual analysis of the time series plot confirms that the currency is highly volatile.  From its humble beginnings, the value of bitcoin spiked well over $1,000, retreated back below $300 and is currently worth around $650 (at the time of this analysis).

A distribution of daily returns also provides visual evidence of the volatility.  The histogram appears fairly normal, but has a standard deviation of 4.9% and has large outliers, reaching and exceeding 20% daily moves on occasion.  As a comparison, the standard deviation of returns for the USD/GBP pair is 0.56% in the same period with just a single outlier value in excess of 5% (8% around the recent "Brexit" vote).

Before considering the effect of volatility, one can view the adoption of bitcoin as a function of time, and see that the three metrics, unique addresses, transactions, and total transaction volume have been steadily increasing.  The three charts below of these three metrics confirm the acceptance of bitcoin as a means to pay for goods and services. 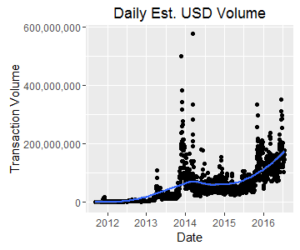 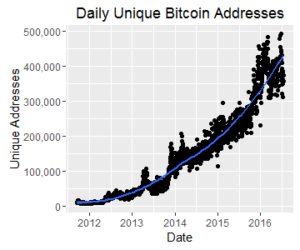 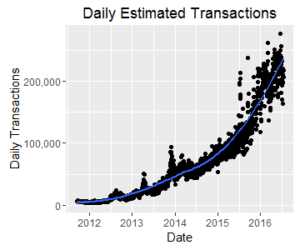 A visual comparison of the adoption of bitcoin and the volatility of the currency may provide insight into whether users are affected by the volatility.  A first comparison of the weighted daily price vs the number of transactions daily provides little evidence of a relationship.  The shading by date indicates that there are clusters of points separated by date.  This chart doesn’t truly reflect what we wish to see, which is the relationship between price volatility (a derivative of price) and usage, rather than the simple non-derivative price vs use. 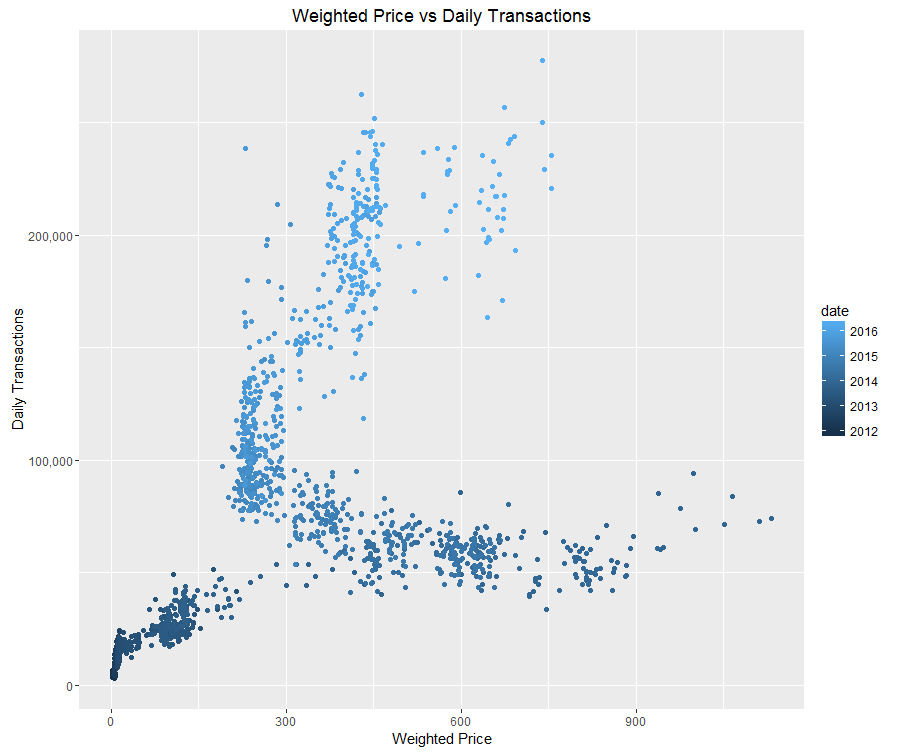 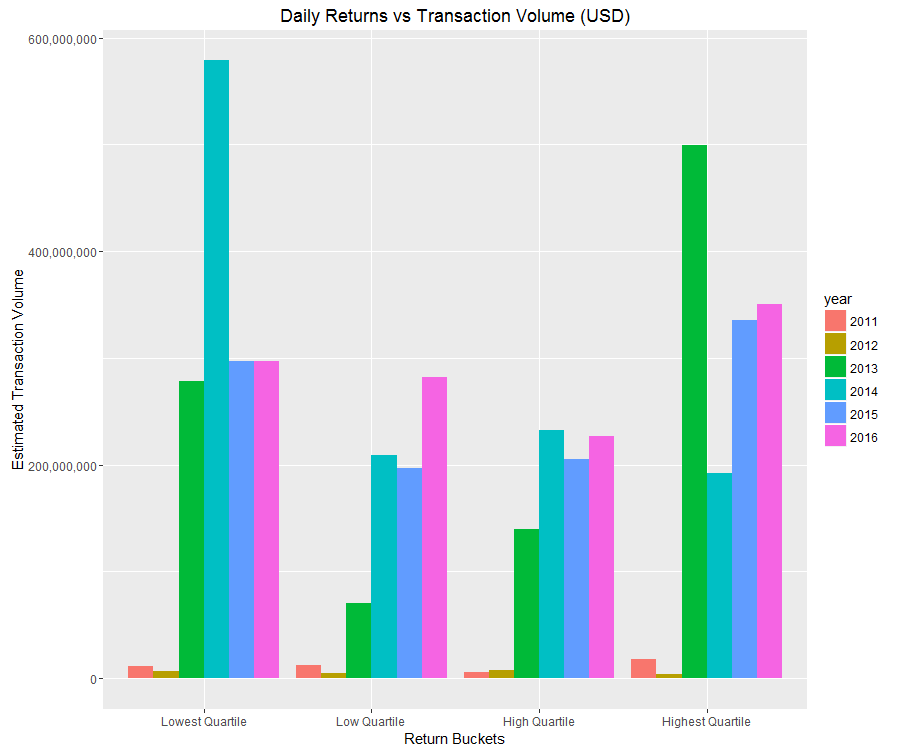 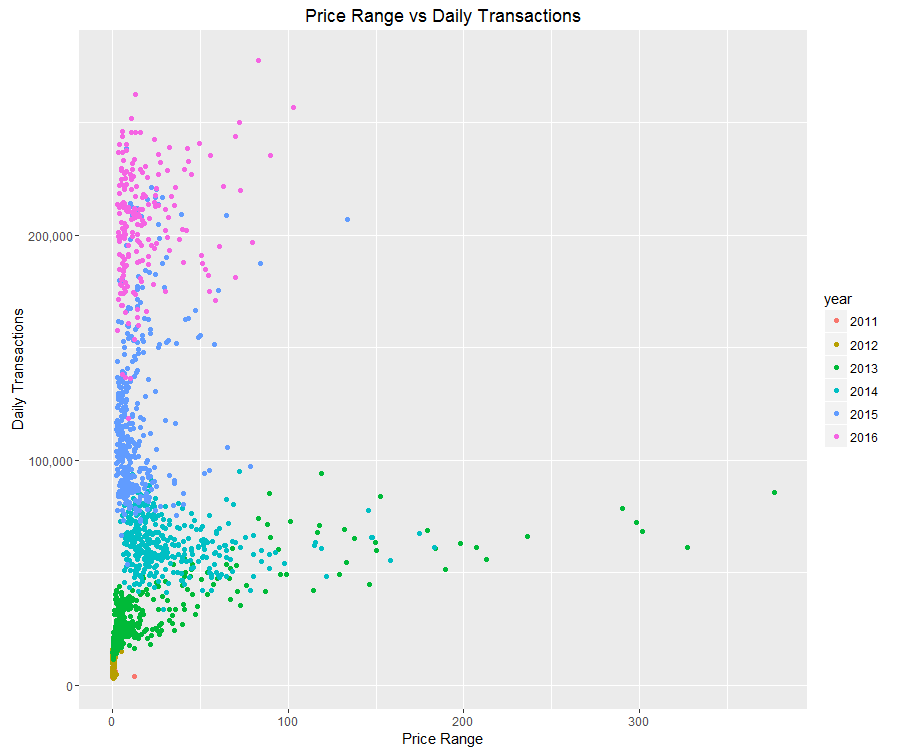 Google February 14, 2020
Google Usually posts some quite interesting stuff like this. If youre new to this site.

btc investment February 17, 2017
I relish, lead to I discovered just what I was looking for. You have ended my 4 day lengthy hunt! God Bless you man. Have a great day. Bye