It’s splashed across the headlines week after week: another vulnerable community displaced by another climate-driven disaster. The NOAA recently released its 2021 infographic data on 20 such events that claimed the lives of 688 people–more than double from 2020–and inflicted damages totaling approximately $145 billion.

While non-profit organizations, municipalities, and utilities are aligning resources and programming efforts to mitigate climate change’s impacts and build local communities’ resilience, diverse urban environments like those within Los Angeles County present multiple geographic constraints and numerous (understatement) stakeholders. If hyper-local solutions are required to ensure the least-advantaged neighborhoods have the resources they need to adapt, how to prioritize them across complex municipal, organizational, and ecological geographic boundaries?

Satellite images introduce a meaningful, “big picture” perspective of the built environment from which to prioritize and engage relevant stakeholders. Inspired by dozens of earth analytics tutorials online (two are here and here to get you hooked!) I was curious if integrating the data “richness” of satellite images with demographic insights might provide a robust method for sorting and ranking neighborhoods for climate resilience support.

To investigate, I assembled the following:

The wrangling required to get the right environment set up was worth it. Visualizing the raster images was immediately satisfying:

As you might expect, these images strongly corroborate with one another. The shades of red highlighting medium and high-intensity development in the far left image display as high areas of imperviousness (think: concrete) in the middle image, and low percentages of tree canopy in the far right image. If you’ve ever been stuck on the 405 for extended periods of time, this should resonate!

Their summarized models, thanks to rasterstats, are shown here and facilitate analysis by census tract:

With good agreement to their original high-resolution counterparts, I explored various plots and graphs, two of which are shown here. I was surprised, but…not surprised (there’s a reason there is a “thing” called environmental justice, after all): 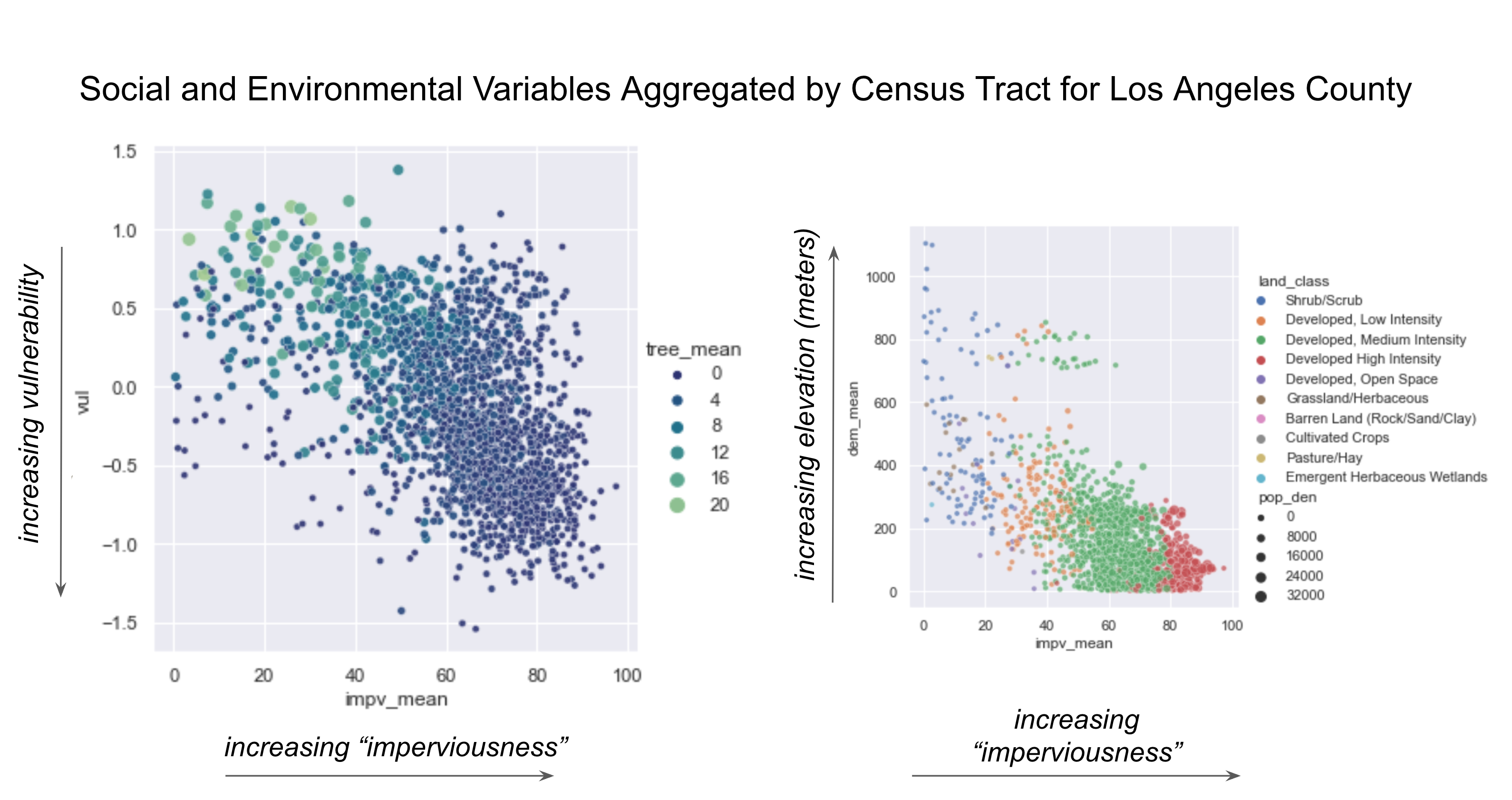 Broadly characterizing the two visuals above, the least disadvantaged communities:

Given the strong inter-dependencies, I simplified my next steps by anchoring on just one variable: imperviousness. Binning this variable into deciles created a practical and reliable means of focus; as expected, low mean tree canopy coverage and vulnerability score were consistent with the 10th decile:

The geographic distribution of these deciles are shown below for the most intensely developed portion of the county: 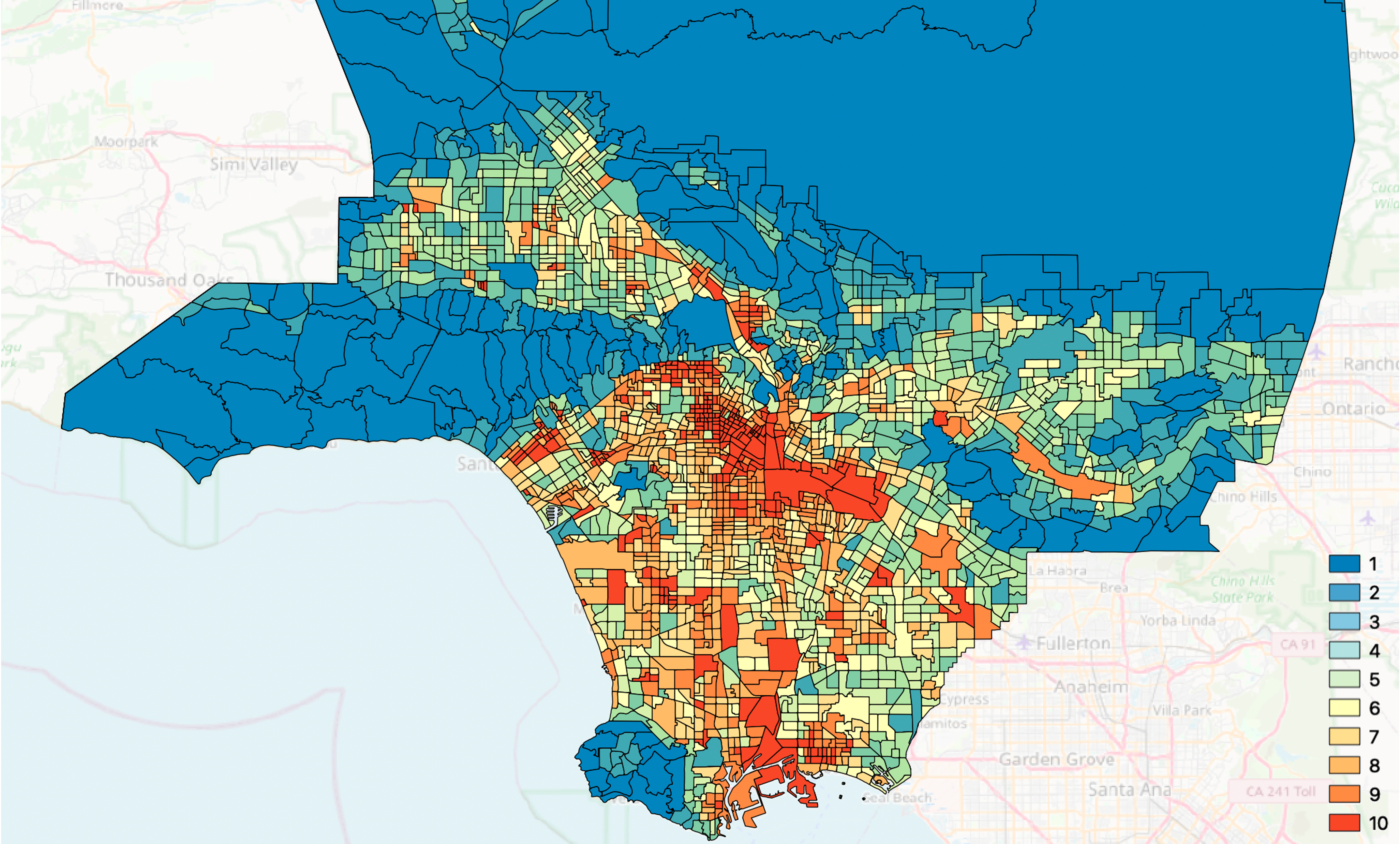 The dataset can be organized to any cultural context--watersheds, for instance--to facilitate alignment with all relevant stakeholders: 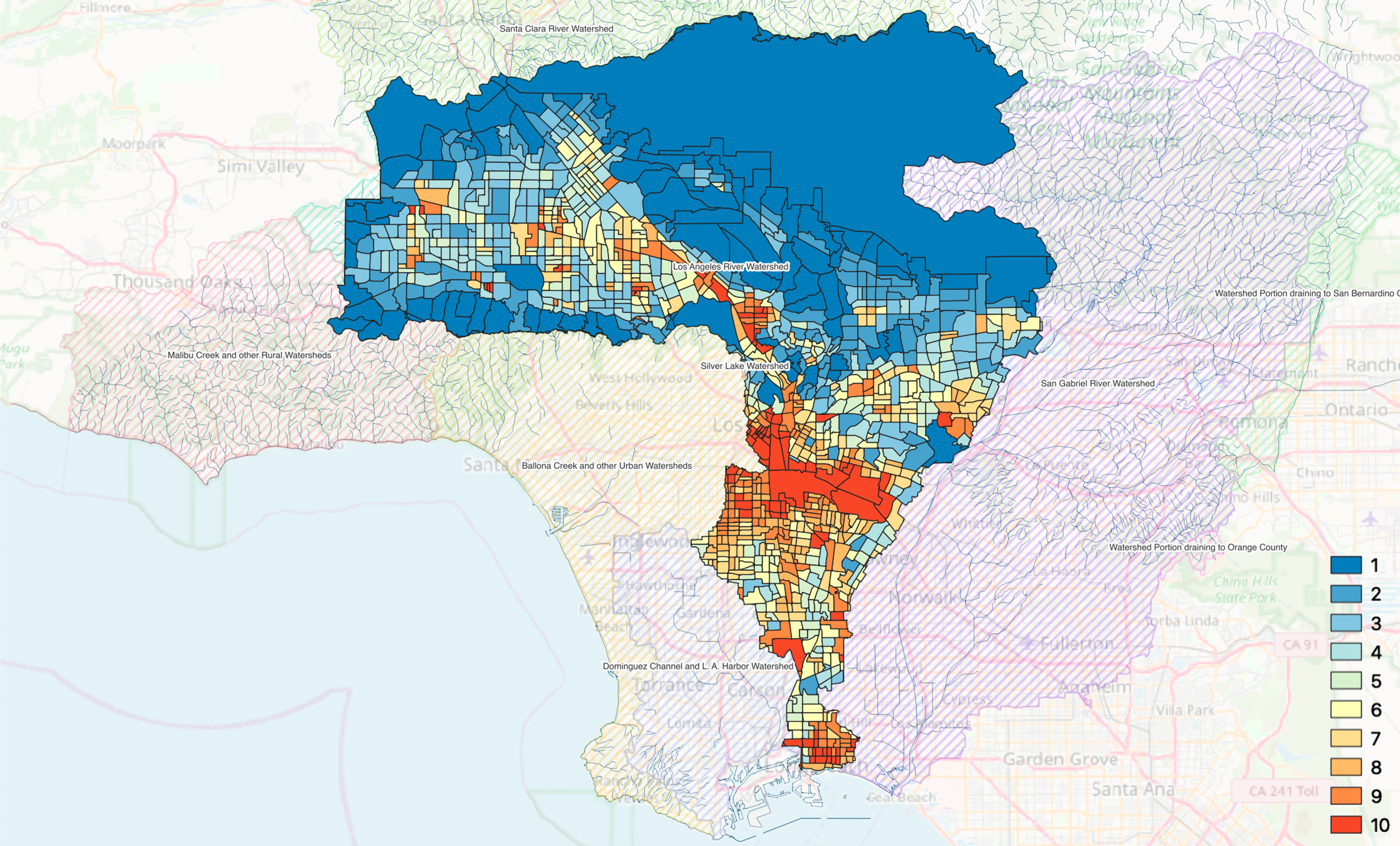 At this time next year, we’ll have the advantage (and perhaps dismay) at seeing NOAA’s 2022 “billion-dollar disaster map”. Let’s use this gift of time (and meaningful spatial insights!) to build up our own communities with climate resilience strategies. If you’re in the LA area and would like an introduction to organizations doing some amazing work, feel free to reach out--I’d be happy to share my learnings.

I've spent the last twenty years integrating and interpreting subsurface data sets as a petroleum geologist in California. I've recently left the industry and am excited to add more rigorous data analysis and visualization techniques to my skillset...
View all posts by Jennifer Anderson >