The used car market is massive. It amounts to a TAM (total addressable market) of almost $1 trillion with 40 million+ cars sold each year. Despite such a size, the industry is notorious for its lack of transparency and poor customer service. Competition is fierce, as the largest player (Carmax) has only ~2% market share. Yet the industry had not focused on innovation until recently when the e-commerce boom started to influence everything customers buy including cars.

Carvana (CVNA), Vroom (VRM), Shift (SFT), and Carlotz (ACAM) entered the industry in the last few years to transform the car buying experience into one that can be entirely done online. Carmax (KMX) started to follow as its stock languished behind that of its new tech peers. While the coronavirus pandemic only accelerated this trend, e-commerce for used cars is still less than 1% of total units sold. Online car-buying will only accelerate from here and the winner(s) will be handsomely rewarded for taking advantage of this massive shift in consumer behavior.

Inventory is one of the most important elements that drives sales growth for a used car retailer. The goal of this project is to compare inventories of CVNA and VRM (the two largest online used car retailers) to assess which company has a more desirable inventory, which improves its odds of driving sales growth and stock price appreciation.

Both CVNA and VRM websites were scraped on 10/27/20 for used cars in the price range of $22,145-29,527. This range was derived from a downpayment of $2,500 and a monthly payment of less than $500, which is what a typical American pays for a used car.  CVNA was scraped using Scrapy and VRM was scraped using Selenium. Inventories of the two companies were then compared for differences in their age, brand, models, miles, and price profiles.

The average age of a used car sold in the US is 3-5 years old. Both CVNA and VRM tend to focus on younger cars as shown below but CVNA offers a wider range of selection and has higher percentage of inventories in the 3-5 years old range. There also seems to be a statistically significant difference in the mean age of the two companies' inventories with CVNA cars ~1 year older than VRM cars on average since the p-value from a two-sample t-test was almost 0. Overall, the age profile of CVNA inventory looks better than VRM's.

Brand and model distributions don't seem to yield much insight. Both companies have ~50% of their inventories in the top 10 brands and ~7% of their inventories in the top 10 models. The list of top 10 brands and models are from Autobytel and Autotrader, respectively. While CVNA does offer a wider selection, the difference is marginal. 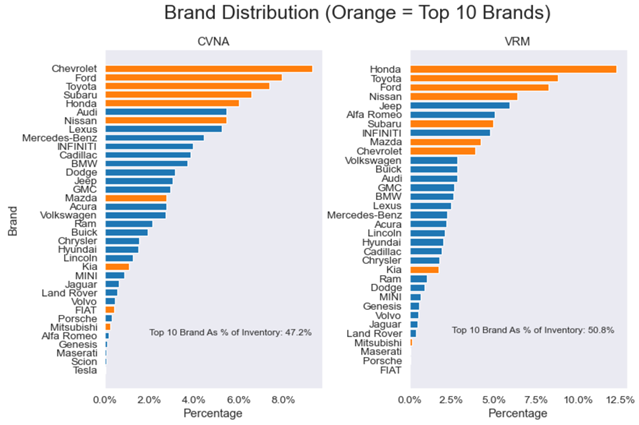 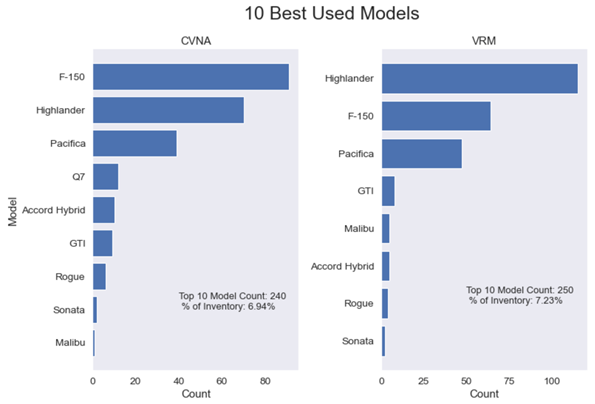 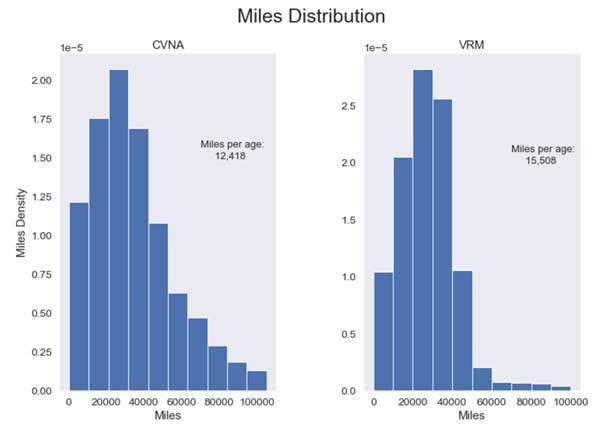 Lastly,  CVNA also seems to have an edge on the most important variable in a car buying process, i.e., price. On average, CVNA cars are $312 cheaper with p-value of 0.024 from a one-sample t-test. Adjusting for age yields a slightly less compelling result, though the price differential is still meaningful enough to warrant attention. 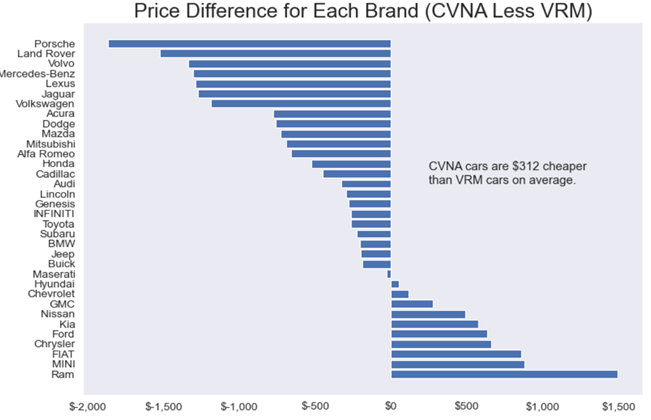 As the chart below shows that while CVNA and VRM both entered the used car business in 2013, CVNA has been growing much faster than VRM. The analysis of their inventories indicate that this trend is likely to continue for the foreseeable future unless VRM changes its inventory sourcing strategy. VRM needs to change how it prices its inventories as well as improve the quality of its inventories in order to compete with CVNA. Therefore, despite the higher valuation, CVNA is still a better investment than VRM at this juncture. 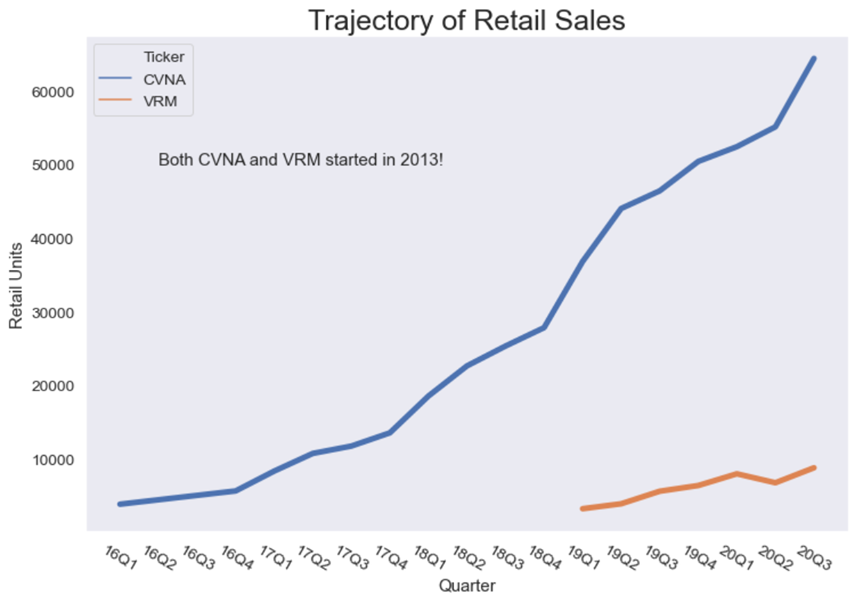