Changing Data Trends in the Ingredients of Pain Relievers

Before getting into the market, a new drug application, known as an NDA, must be filed with the U.S. Food and Drug Administration to ensure its safety and effectiveness. FDA has released several files of these NDA’s at the [email protected] database. See the graph below for the Entity Relationship Diagram. The data used for this exploratory and visualization project is from the table “Application”, “Product”, and “RegActionDate”. 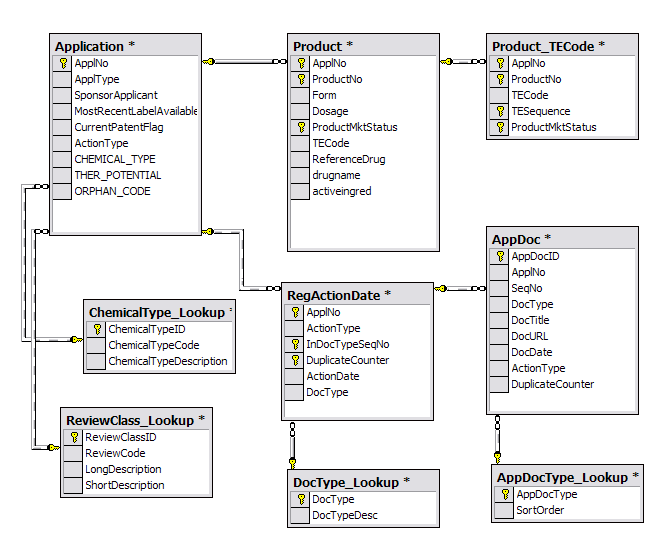 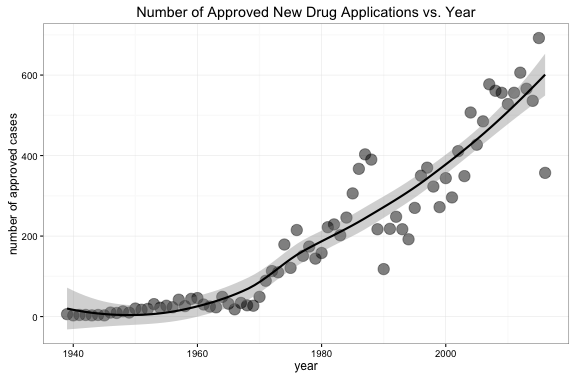 The rate of approved new drug application was not calculated due to the nature of the data, which consists of only approved cases. The confidentiality for total number of submissions may serve as protection from revealing the names of applicants who submitted an NDA but failed.

The analysis is divided in to three categories to analyze the drugs: active ingredient, form, and potential. This project looks at how factors in each subcategory change over the time period from 1939 to 2016 and checks if there are hidden trends.

I. Data on Active Ingredient

Rather than randomly choosing which active ingredients to study, this project focuses on those compounds that are most frequently used. The plot below shows the top ten active ingredients in approved cases, and further analysis focused on these ten.

The popularity of these ten ingredients has changed over time, as seen in the graph below. To be noted, the lines do not reflect the actual data but are smooth lines to fit the data in order to avoid noise and more clearly demonstrate the patterns.

On the left is the raw count of the number of approved cases vs. year, and on the right is the normalized plot. To be more specific, the data in each year is normalized with the total count in that year (data in the first plot).

One hypothesis for this has to do with the pressures on the pharma industry to increase profit margins. Drugs like Acetaminophen, Hydrocodone Bitartrate, and Ibuprofen, are inexpensive and cannot be expected to bring high margins. Under this pressure, it is not surprising that pharma is looking for new compounds, for example, Oxycodone, to market to the public.

Interestingly, the increasing trend of Oxycodone matches with the preference of drug abusers. A nationwide survey conducted by the researchers at Washington University School of Medicine in St. Louis indicates opioid drug abusers favor Oxycodone over other pain relievers. The high Oxycodone produces resulting from its high purity over common pain reliever, like Acetaminophen/Hydrocodone combined drug. If two incidents are correlated in some way, a stricter legislation may be needed to regulate the misuse and abuse of prescribed pain relievers, especially the ones with Oxycodone.

Besides active ingredients, drugs can be formulated into different forms, like an oral pill or injectable solution. This section provides insight into the changing trend of the forms among the approved drugs. The rationale for data acquisition is similar to the analysis for active ingredients. First, the top ten most popular forms are gathered, and a time series based plot is generated. 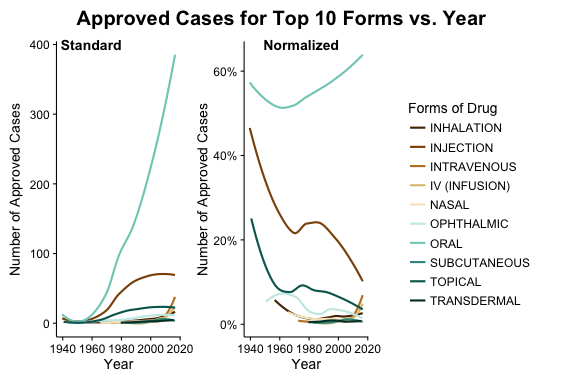 There is a diverging trend for Oral and Injection in forms of drug, and the possible explanation is that people do not like injections if a similar drug in oral form is available. So to make the drug more marketable, those pharmaceutical companies formulate the drug into oral form if possible. Another explanation could lie in the complicated regulation of injectables that shifted industry preference to introduce orals.

In general, there are two review types for an NDA, standard and priority. The FDA defines these as follows: standard review stands for a drug with therapeutic qualities that are similar to drugs already in the market, and priority review represents a drug with an advance over therapy that is available to the public. 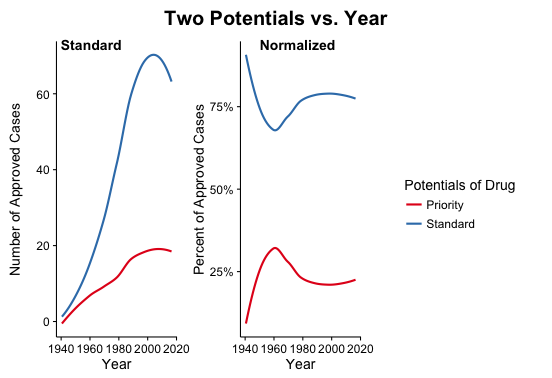 As we can see from the plot above, the ratio of normalized review types in approved cases reached a plateau in the 1980s for standard review and remained at quite a steady rate of 75%. For priority review, the rate of approvals seems to have held relatively steady at 25% since 1980. The lower percentage of priority review makes sense because of the difficulty involved in advancing the development of drugs for new or uncured diseases.