I recently read a shocking statistic: the U.S. has the worst maternal mortality rate during childbirth in the developed world. The CDC estimates that 60% of these deaths are preventable. How did this happen? Now that we are aware of the problem, what is the American hospital system doing about it?

Upon further reading, I discovered that in the 1950, the maternal death rate in the U.S. had decreased to such a point that the Journal of American Medical Association declared it “irreducible.” It then decreased from 1 in 100,000 in the following years. Since then, however, the focus had shifted towards the infant during childbirth and away from the mother. In the last twenty years, the maternal death rate has increased significantly in the U.S., even as it has decreased in other countries in the developed world. 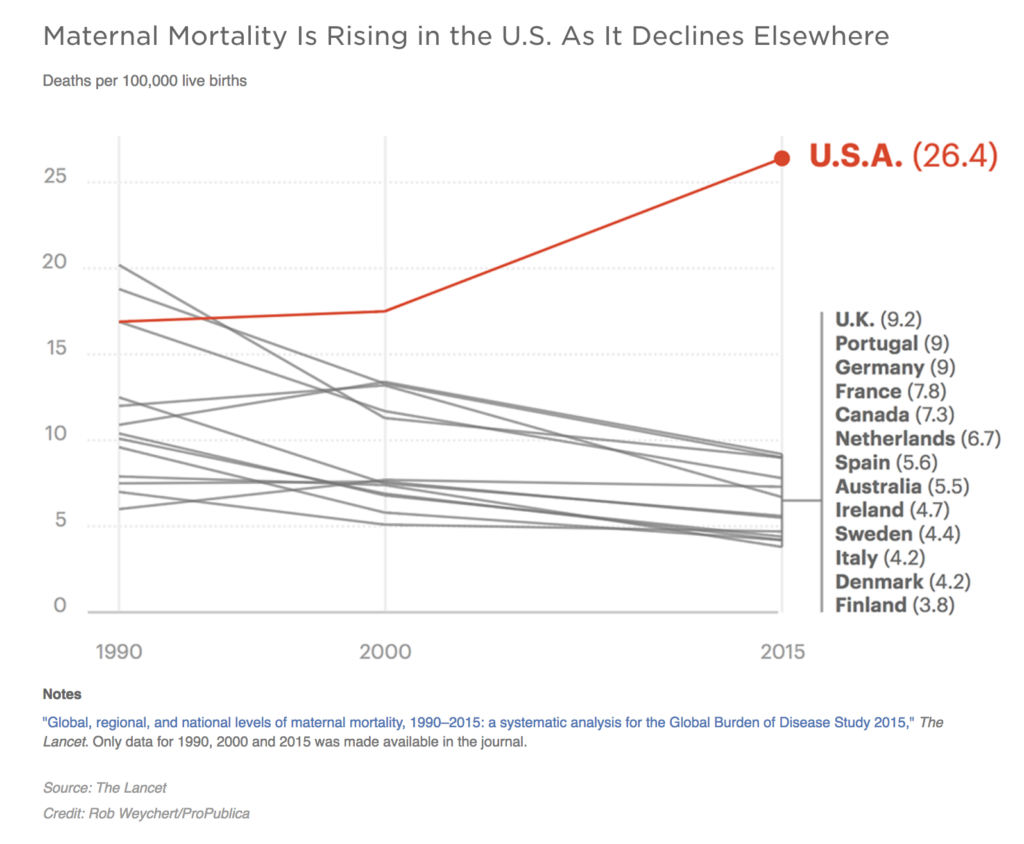 So what’s being done about this? Since 2006, the California health system has introduced new protocols to help prevent those 60% preventable deaths. The hospitals that have taken up this new protocol have been able to dramatically reduce their maternal mortality rate, and the state’s maternal mortality rate has decreased by 55%. The rate in the U.S. overall, however, has since continued to increase. 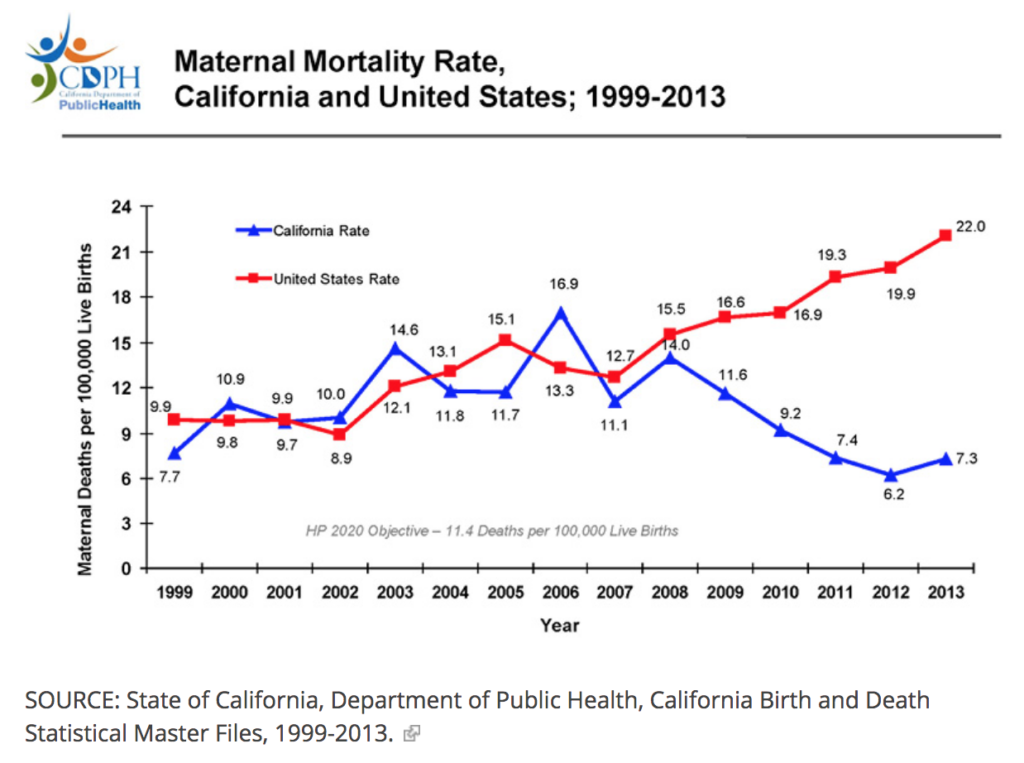 I decided to investigate n the question of progress on this front in  New York State: Have we reduced our maternal mortality rate as California has? In order to examine this issue, I chose to look at medical malpractice from obstetrician-gynecologists licensed in New York City (I limited myself to the city due to time constraints). I used Selenium  from the New York State Department of Health’s website,to get information about all the doctors licensed to practice in the five boroughs: their names, medical schools, graduation year, and any payments they made from either settlements or arbitrations of malpractice. The information about these lawsuits is only publicly available for 10 years, so I looked at the total number of lawsuits per month since 2009 (see the plot below). As  you can see, tThere has been no significant downward trend.

Next, I decided to compared doctors from different medical schools to see if that had an effect on number of malpractice lawsuits. The doctors in my dataset graduated from over 200 different medical schools, so I first filtered out and looked at the international schools. The histogram below shows number of doctors who have or have not been sued (successfully) in the last ten years.

The two surprising countries I saw below were Grenada and Mexico. Grenada, an island in the Caribbean, produces a surprisingly large portion of American doctors . This was less surprising after I did some research and found out that students who struggle to get accepted by American medical schools will apply to universities in Grenada and Mexico.

There was nothing very interesting to be found by comparing the schools by state: they all have relatively similar proportions of malpractice, except states where fewer than 3 doctors studied (West Virginia, Arizona).

Once normalized, one can see that a slightly smaller proportion appears in the first group. I conducted a t-test between the elite schools and the rest of the schools from the U.S. and found no significant result (T-stat: -1.37, p=0.169).

So if not education, what other parameters might predict which ob-gyn physicians commit malpractice or not? Since this is a web-scraping project, I decided to look at doctor ratings on two different physician databases: WebMD.com and Healthgrades.com.

I scraped the name and rating (out of five stars) for ob-gyns in the New York City area. As I was pressed for time, it was not comprehensive, but I was able to download about 400 doctors from each website (compared with ~1,000 from the NYS Department of Health dataset). Merging these datasets by name of physician, I was able to compare number of lawsuits with ratings on each website.

As a lot of our web-scraping presentations indicated, online ratings tend to not follow a normal distribution. Most rating distributions tend towards five stars. I found the same phenomenon on both WebMD and Healthgrades. Most of the doctors are ranked between four and five stars, including doctors that have made payments for malpractice (on the x-axis). In the Healthgrades plot, there is a doctor with seven malpractice lawsuits in the last ten years, and he has a four star rating. I did compute a Pearson correlation coefficient for both datasets, and, needless to say, they were both close to 0 and insignificant.

As a reality check, I also plotted the two websites against each other, to see if their ratings matched for the doctors (on the right). As expected, most of the doctors are in a cluster around 4.5-5 stars.

I would hypothesize that these online ratings are mostly influenced by a physician’s bedside manner rather than  by her/his competency. This would explain how a doctor who is very friendly could have a four or five star rating online despite having been charged for malpractice multiple times.

I have found that the number of medical malpractice lawsuits against obstetrician-gynecologists in NYC have not gone down since 2009. I then compared doctors from medical schools to determine if that could be a predictor of malpractice. I did not find a significant difference between doctors from elite medical schools and other U.S. schools. I might have needed more samples, or maybe there is more to medical malpractice lawsuits that could be driving this negative result.

Comparing doctor’s malpractice numbers with her/his rating on websites such as WebMD or Healthgrades reveals no correlation. It seems online ratings are not a predictor of malpractice. I hypothesize that they tend to  function as a predictor of friendly bedside manner by the doctor.

There are many parameters that would be interesting to add to this model to determine if it is possible to predict malpractice: graduate medical education (residencies), board certifications, any board sanctions, years in practice, patient load, etc.

As for the story that got me interested in this project, in California, where the maternal mortality rate dropped by 55% since 2006,most of this change was from toolkits designed to handle those deaths that the CDC had determined preventable (due to hemorrhage).  This change was mostly implemented with hospital-wide procedures, not individual obstetrician-gynecologists. In hospitals in California that did not implement changes, the mortality rate only dropped by 1%,as compared with 21% lower mortality from hemorrhage. So while this project led me to some interesting questions about parameters that might predict malpractice or the accuracy (or meaning) of online ratings, it did not address the need for changes to hospital protocol for handling complications of the mother during childbirth.

While I did not address the influence of race on maternal mortality in America, it is a large part of the issue. If the reader is interested, I would recommend: https://www.nytimes.com/2018/04/11/magazine/black-mothers-babies-death-maternal-mortality.html