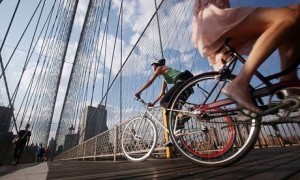 Contributed by Yun-Ju Huang. She took NYC Data Science Academy 12 week full-time Data Science Bootcamp program from Jan 23th to Apr 1st, 2016. The post was based on her first class project (due the 4th week of the program).

Introduction: To Bike to feel the Vibe of NYC

According to "bicycling.com",  New York city is one of the top ten biker-friendly cities. There are more than 500,000 New Yorkers weaving among cars and trucks per month. The officers in the New York MTA and Citi Bike managing departments believe that the commuting trend of riding bikes has already become the crucial flow of transit, yet the trend is still growing!

The bike parking problem increased with the growing trend of bike riding. The urban Yuppie doesn't want to take the risk of parking their expensive bikes on the side of the New York streets. Thus, the young entrepreneur, Liza Perez came up with a business plan to create removable bike parking spaces, and provide a solution to the bike parking problem. The details of her proposal are in her Pedal2Park business plan. I would like to narrow down her removable parking locations to achieve her business goals. 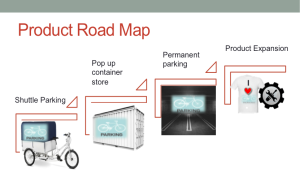 Accumulating the user records in 2015 peak season( from August to October), I did some data analytics on Citi Bike. By analyzing the open data of Citi Bike's in NYC, I could provide more solid information to help Liza get the latest time bike parking market insights to plan their future marketing strategies.  I gathered the data from Citi bike website, which had 14581031 variables. The data contents include the Citi bike stop locations (longitude and latitude), riding times, gender, age etc.

Near 6/7 of the users are subscribers. Those subscribers are more likely to become private bike owners once they become regular bike users. 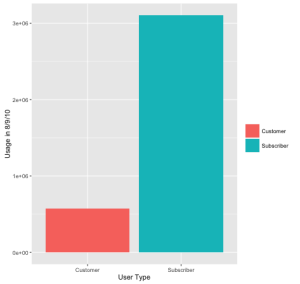 We can predict the age of our target customers by knowing the age of the most frequent Citi Bike Users. 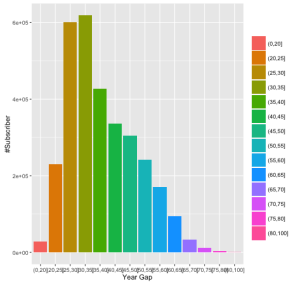 The population of male users is larger than female user population, therefore, we may assume that the majority bike users are male. 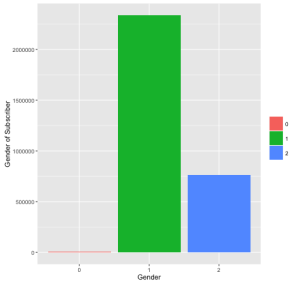 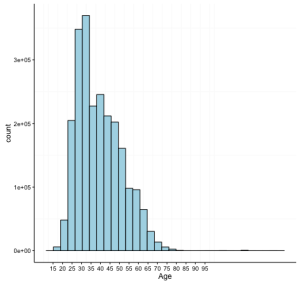 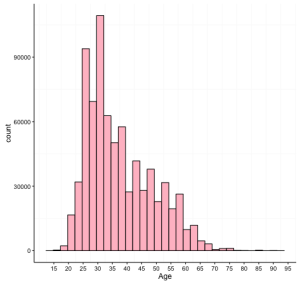 We should choose an area with higher household income such as Brooklyn because the implementation fee will be lower than in Manhattan. 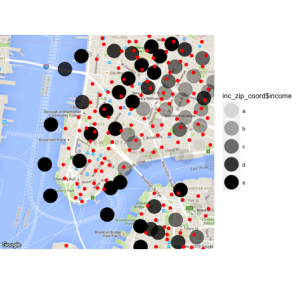 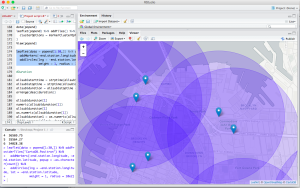 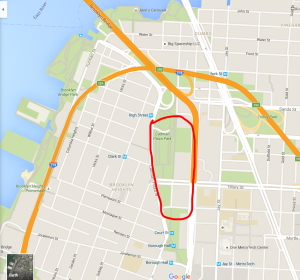 I discovered the most popular Citi Bike stops with high household income locations in Brooklyn. Most bike riders started or ended those stops frequently that it becomes their daily route. In other words, this place would be a great place to locate a removable bike parking space. In the first chart, the deep purple area is the optimal location for a container parking space. Liza should start Park2Pedal -- removable bike parking business in the deep purple location.

A recent graduate of the NYU Integrated Marketing program, Claudia Huang specializes in marketing analysis. Immersed in a creative, trend-sensitive environment, she learned to integrate marketing channels, acquired data analytical skills, and forged a branding mindset. When she...
View all posts by Yun-Ju Huang >

Bracciale LOVE cartier 16 buon mercato March 13, 2017
cartierbraceletlove Hi ‘m planing on preparing these tonight and surprising my girlfriend with them in the morning. Thing is the area we live in is pretty limited and the only brand yeast I’m able to find is Fleischmann’s. I’m just wondering if the recipe should be modified for the different yeast, also currently only have a 9×13 baking dish Bracciale LOVE cartier 16 buon mercato http://www.gioiellibuonmercato.com/category/bracciale-love-cartier-replica