What school is the best "bang for your buck"? An analysis of the College Scorecard.

In 2017, Americans are burdened by more student loan debt than ever in history - over $1.4 trillion in debt among 44 million borrowers. That number is likely to grow as more people attend college and tuition continues to rise. At the same time, a college degree has become more of a necessity in today's economy, as the average salary of a worker with a college education is more than twice that of someone with a high school diploma.

Given the advantages of a college degree paired with rising costs, it is important for prospective students to be able compare costs across schools, as well as assess their post-graduation outcomes.

I used the College Scorecard data released by the Department of Education for my analysis. The Department began releasing the College Scorecard in 2015 to improve transparency in higher education and hold colleges accountable for measures like value and quality. The full data set has information on almost 8,000 institutions in the United States, including community colleges, undergraduate schools, and post-graduate institutions like law and medical schools. It also contains over 1,500 variables, including:

It is important to mention that many of these variables, including median earnings and graduate debt, only apply to student borrowers of federal loans and may not be representative of students who have private loans or no student debt.

For my analysis, I specifically looked at institutions that offer four-year undergraduate degrees and focused on variables related to cost and post-graduation outcomes. I attempted to answer the following questions:

First, I wanted to get a sense of earnings and employment prospects of former students and compare that against the average cost of each school. For prospective students considering loans to pay for college, it might be valuable to understand where they can get the best "bang for their buck" - schools with low average costs but relatively high earnings among former students. I graphed average costs for each institution against 10-year median earnings, separated by school type. 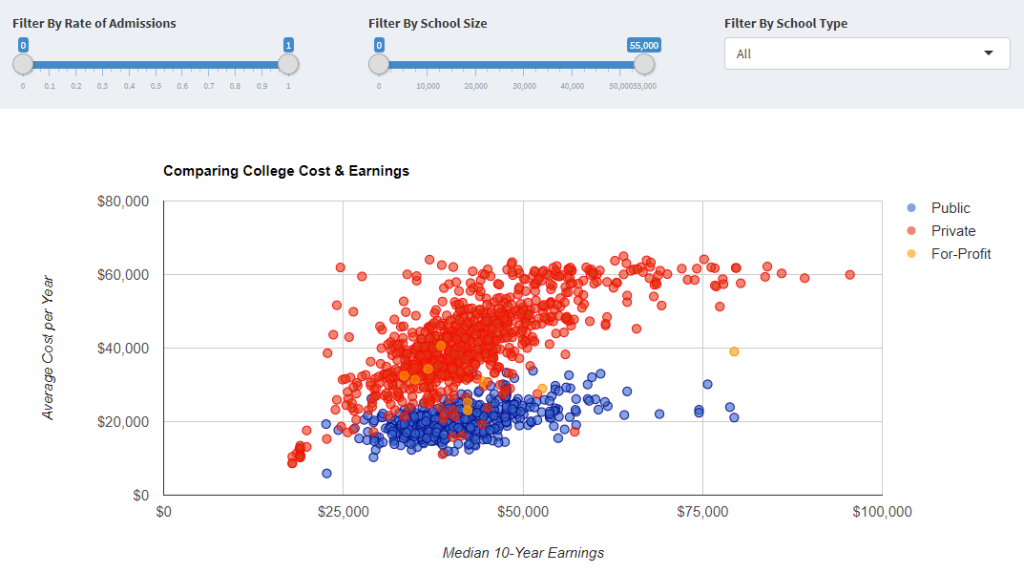 Some insights from the graph included:

Next, I was curious to see what average costs, debt, and earnings look like across the United States. I used the College Scorecard data, grouped by state, to create a heat map of each value with leaflet.

From mapping the data, I found that:

Finally, I wanted to see whether there was a difference across school type based on several different variables. Specifically, I wanted to look at demographic and outcomes data for private for-profit colleges, which have received criticism in the United States for their predatory recruitment practices and poor post-graduation opportunities. 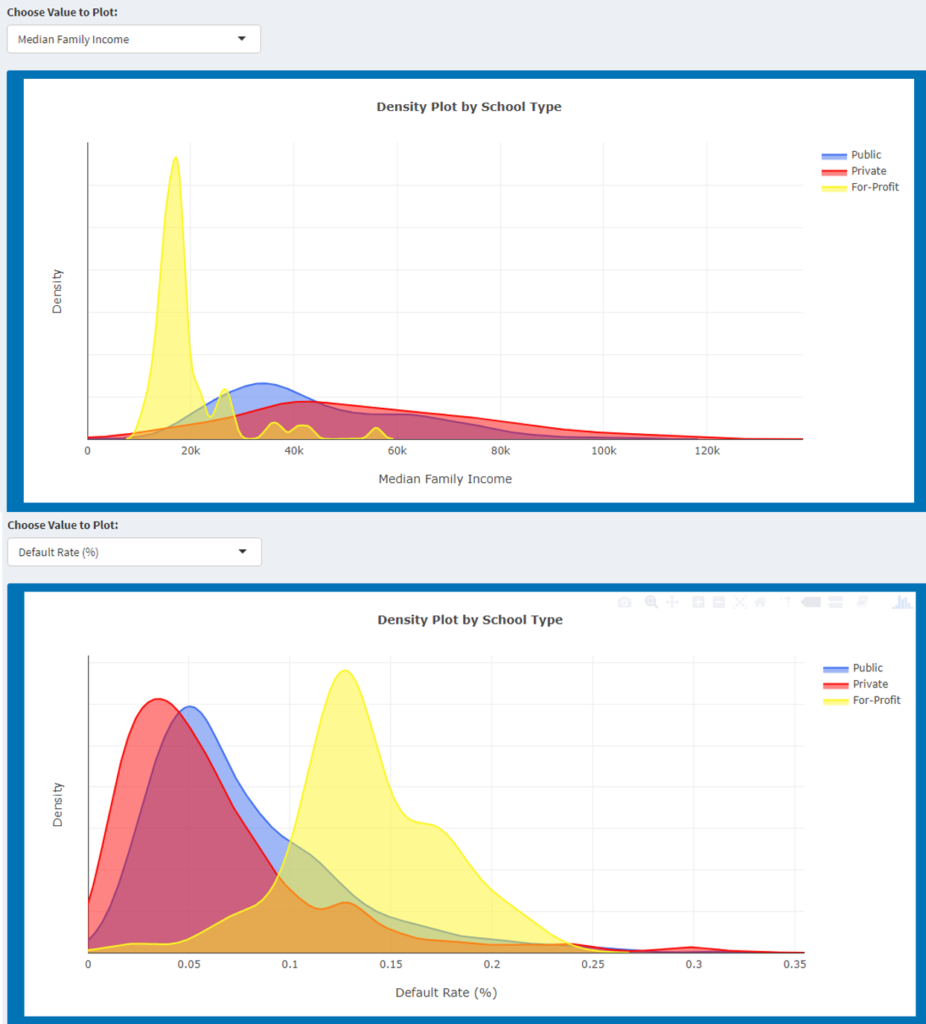 The College Scorecard data definitely has its shortcomings - much of its data is based on students who have federal loans, and it may not completely represent the full undergraduate population. However, it also provides a trove of information that was previously unavailable, including data on student outcomes. While no single data point can capture a school's "value," the College Scorecard is a very useful resource for prospective college students to understand and compare different schools across a variety of important metrics. I invite you to interact with my Shiny App to further explore the data and my insights.