Hospitals – that’s where sick people go. While it is still true, the Affordable Care Act (aka Obamacare) has changed the role of hospitals in the community. In addition to expanding healthcare access, Obamacare focused on reducing healthcare costs and increasing healthcare quality. The idea is to further integrate hospitals into the local public health framework to better manage community health through preventative and coordinated services to reduce costs. In a nutshell, hospitals are charged with the task to care of not only the patients but also their communities.

The reality is managing the health of a community is not an easy task and many hospitals struggle
to define their place. Experts have further suggested that this integration might be associated with healthcare outcomes, because post-hospital care is critical to patients’ recovery. For example, a recently discharged stroke patient will less likely end up in the hospital again if the patient is provided with resources to develop healthier nutrition and exercise habit in the community. Therefore, in this blog, I would like to assess the association between health disparities and healthcare quality using a data visualization tool.

This blog used two different datasets. The 500 Cities Project was developed by the Centers for Disease Control and Prevention to provide local estimates on health behavior, preventative care, and disease prevalence for 500 US cities based on the 2010 census results. Hospital compare website publicly reports all quality data from Medicare serving hospitals. Using these quality measures, the Centers for Medicare and Medicaid Services calculates a summary overall rating (1-5 stars, 5 is the best) for each hospital. The two datasets were combined using zip codes and city name. 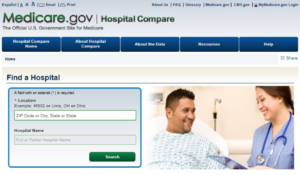 The map is designed to allow users to visually assess trends in healthcare and health disparities. A total of 437 cities and 1402 hospitals were included. On average, each city has about 3 hospitals with a mean of 3-star rating. The radius of each city reflects the number of hospitals. Cities with a higher mean hospital quality ratings tend to have higher coverage of preventative care, such as insurance coverage and screening and vaccination among elderly. In addition, the disease prevalence (i.e., high blood pressure and diabetes) and unhealthy behavior, such as smoking and obesity, were lower in cities with higher quality hospitals. Significant differences in several health indicators were found among cities with different mean quality ratings, and were included in the city profile design. Some regional differences were also found. Cities in the Western US were less likely to have preventative care coverage, such as routine physician check up or screenings. On the other hand, cities in the eastern parts of US had higher rates of unhealthy behavior and prevalence of chronic disease. 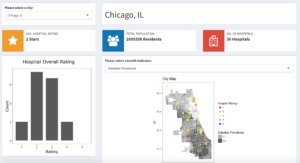 The city profile provides an overview of the hospital infrastructure for 30 of the most populated US cities. The dashboard is designed to help city officials, public health agencies, and hospitals to prioritize key issues in community health by benchmarking city data with national estimates. In addition, a prevalence map with hospital locations were provided to allow hospitals to identify some of the challenges in their local community by census tract to design outreach programs that can be effective in intervening the disparities.