Comparing Colleges through Analysis and Scraping of User Reviews

The senior year of high school marks a critical point in one's educational journey. Many may feel excited and look forward to the activities that the senior year brings, such as the senior trip and prom. However, it is important to acknowledge that there is much more to the last year in high school than just fun and games.  In one year from then, seniors will graduate from high school and embark on a new journey to explore the world of college. As such, students will be tasked with deciding on which college to go to based on numerous factors such as reputation, location, opportunities, etc.  To help with this daunting task, an interactive Shiny app was built to visualize and compare colleges across all the states in the U.S.

Over 6,000 pages were scraped from ratemyprofessors.com in order to collect the ratings, reviews and data of colleges such as its name and location. At first glance, we see that the url has a pattern for the schools, in that every school has its own "sid" number tagged to the end of the url:

Depending on whether a particular school has a lot of reviews or not, a "Load More" button will show up such that when we click it, more reviews will populate on the page. Since the URL does not change when the button is clicked, Selenium had to be used to mimic the clicking action.

Shortly after running the script, it was evident how slow Selenium was in collecting the data we need for our analysis. The driver is called for every element we want to extract and it took on average 2-3 minutes to complete one page of scraping before moving onto the next. To combat this problem, Scrapy was used in conjunction with Selenium where Selenium loaded all the reviews on the page (eg, clicked the "Load More" button until it does not appear anymore) and then the page source with the loaded elements was passed to Scrapy to parse. This technique helped to cut down the time to about 5-10 seconds per page.

Once the data was collected, we want to analyze the missing values in our dataset. Using the vis_miss() function from the "naniar" package, we see that the fields "Safety, Facilities, Campus and Library" all have significant amount of missing values. Looking back to the original website, it looks like those fields no longer exist as an option of criteria for students to rate a school by. As such, we have removed those fields from our dataset for the sake of completeness. 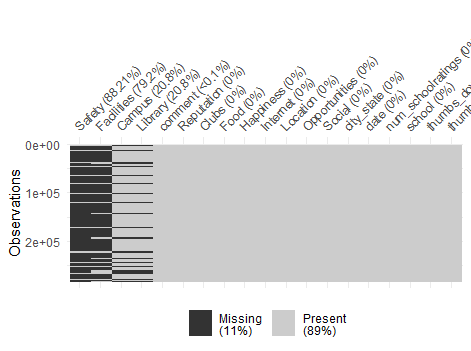 After collecting the data, an interactive shiny app was created to visualize and analyze the various colleges across the states. The first tab contains a chloropleth map that shows the average ratings of schools in a particular state.  A user can hover over different states and see how the map and rating scores change as they select different criterias. For example, we can see that NY received an average rating for the field "Happiness" of around 3.78, on a scale of 1-5.

On the "School Comparison" tab, a user has the option to compare two schools from either the same state or different states. A slider bar for the number of reviews given to a particular school was also provided so that one can filter out the schools that received relatively low reviews. Once the criteria are set, clicking the "Compare Schools" button will generate a violin plot of the different criteria, faceted by the schools of interest. In our example here, if we compare New York's "Manhattan College" to New Jersey's "Rutgers", we can see that the two schools are actually rated very similarly. With the exception of "Food" and possibly "Clubs" where Rutgers fairs a little better, both schools tend to have higher density for above average scores across many of the school criteria.

Next, a user can visualize the comments made about a particular school via a word cloud. In order to generate this word cloud, common English stop words have to be ignored from the comments. Additionally, the comments frequently mention the name of the school itself, so that was also included as part of the stop words. Once that is done, we can see that Rutgers generally received very positive comments. Words like "great, love and best" were frequently mentioned from the reviews and hovering over the words shows that the words were mentioned 173, 97 and 50 times respectively.

However, looking closely we see that there were also mentions of negative words like "regret, worst and hard". Although these words were not mentioned as frequent, it is also important to understand why they show up in the word cloud at all. To analyze this further the user can navigate to the comments tab and see what the context was for those negative words to decide for him/herself whether or not those comments are worth considering in their decision to choose a particular college.

Due to the nature of the website scraped, it is hard to distinguish whether a review is from a real student or staff from the school. It does not appear that the website requires a verification from its users (such as signing up with an .edu email), before posting the reviews publicly. Additionally, because reviews and user ratings are very subjective, doing a statistical analyses such as t-tests might be biased and can potentially provide an unfair comparison between two schools.

Choosing colleges can be a daunting task for high school students in their senior year, but in today's world where reviews and ratings are readily available, it becomes much easier to make an informative decision. With the college analyzer shiny app, one can compare schools of different criteria with ease and also be able to see frequently mentioned words in reviews and analyze particular words of interest.

Raymond Liang is an aspiring data scientist currently studying with the NYC Data Science Academy. Through the 12 week intensive course, Raymond is able to apply advanced data manipulation and visualization techniques using languages including, but not limited...
View all posts by Raymond Liang >