Confronting Outbreaks in a New Era

Mankind's fight against contagious disease has been a constant throughout history, and the tools we've developed for fighting contagion have evolved considerably. Unfortunately, the contagions that we fight are also evolving rapidly, and while we've won particular battles, the war goes on. In the 21st century, we have the tools of modern medical science: prophylactic measures, vaccines, antibiotics, antivirals, and supportive care. On  the other hand, the contagions we face have unprecedented population densities to work with, disease vectors that can circumnavigate the globe in a day, and increasing levels of resistance to human countermeasures. All of these conditions contribute to the 21st century becoming a new era for disease control, with an increased urgency and intensity to the fight. And, just as 21st century warfare has been revolutionized by the battlefield pictures yielded by satellites and aircraft, it's time for a strategic picture of the fight against contagious disease.

Seasonal pathogens provide an interesting example of how to implement new measures because they strike regularly and allow us to observe the entire cycle of an outbreak. The frequency of repetition also allows us to see the efficacy of new measures quickly, and removes much of the guesswork.  For example, a recent study on the effects of vaccination in the 2017-2018 flu season has demonstrated that vaccination measures have achieved a 38% efficacy, which resulted in the successful prevention of 109,000 hospitalizations, and 8,000 deaths. Part of making influenza vaccinations this successful was knowing to to expect infections to begin in November, and to start vaccinating immediately in advance of that. 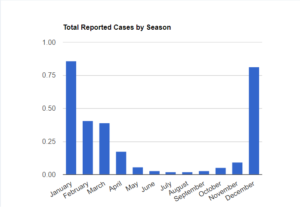 Perhaps knowing to deploy an influenza vaccine in October doesn't seem so impressive by itself, but imagine what the results of the same deployment schedule would be for a contagion that followed the same pattern as polio. 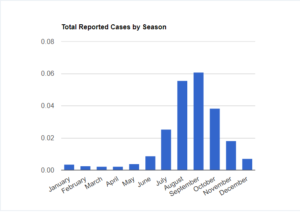 But what about the subtler aspects of contagious outbreaks? Perhaps we know which demographics are most vulnerable, but do we know which are most likely to act as vectors? Maybe asking people to use hand sanitizer at a certain time of day (or at certain venues) could cripple the ability of some viruses to spread? Or maybe there are certain places and times where STIs are most virulent, and people are missing key information on how to protect themselves? There are many possible insights that could be gained from developing a more complete picture of the behaviors of contagious diseases, and these are only the beginning.

So how do we get started? I began by populating an interactive map of the united states with data on weekly infection reports of eight contagions in the United States during the past century. The map allows you to playback the progress of a particular outbreak as it spreads from state to state, and as it waxes and wanes in its severity. 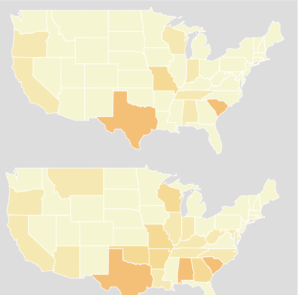 I also added automatically generated plots of infections by month and year, and a heatmap for viewing the entire historical trend. 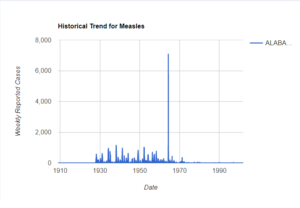 This is very much a work in progress, but the current app gives a clear idea of what level of clarity we can achieve with the right data. County by county data exists for many demographic details throughout much of the United States. When coupled with contagion data of a similar resolution, it will be possible to observe the origins of the outbreak as well as the places where it is able to spread the fastest. By extracting correlation with demographic and other data, we may then be able to establish actionable insights that change the nature of the fight. Whilst thinking small, it's easy to overlook the simple things we can do which could have a big impact, but when you consider that it's possible to save nearly 10,000 lives in a single year with a vaccine that reaches less than 50 percent of the population and that is effective only 38 percent of the time, it's easier to understand how even small things can save many lives.

Aaron Festinger is a data scientist with a background in math, physics, and military special operations. He's interested in space travel, languages, and the mathematics of learning. In his free time he enjoys kayaking, brewing mead, and science...
View all posts by Aaron Festinger >