COVID-19 has dominated all aspects of American politics in 2020. But how has it impacted the most basic of rights within that system: signing up to vote?

As we reach the final days of the 2020 Presidential Election, it's not hard to identify one overwhelmingly dominant issue: COVID-19. The coronavirus outbreak ranks as one of the most important issues to voters this year - both in its own right, and indirectly through the impact it has had on other top issues like the economy and health care.

It has also touched our political system itself, as seen in the struggle to ensure voters can safely and securely cast ballots on November 3rd without jeopardizing their health. Concerns over ballot-casting have dominated most media coverage of how COVID may impact the voting process. Yet the pandemic may have also had another, overlooked effect that threatens the integrity of our democratic process: its impact on the ability of citizens to register to vote.

Voter registration, as with most election processes/rules/ regulations, varies state-by-state. However, what’s mostly consistent is that many new voter registrations occur from two types of contact:

For example, my home state of New Jersey has aggressively pursued reforms and policies in recent years aimed at expanding voting rights & access. This has included efforts to ensure that unregistered residents sign up to vote when they come into contact with the government for unrelated reasons - such as via the state's automatic, opt-out registration policy when residents visit a NJ Motor Vehicle Commission location.

COVID-19, and the resulting lockdowns, posed a variety of challenges to current systems/norms of registering new voters. An overall decrease in face-to-face interactions, public events/gatherings, etc. has made it difficult for campaigns and advocacy groups to identify opportunities to register new voters efficiently and en masse. Additionally, at the peak of the disease, the vast majority of government services on all levels were temporarily shut down, limiting government-led opportunities to register residents.

This led me to formulate the following research question: what, if any, impact did COVID-19 and subsequent lockdowns have on rates of new voter registration in NJ? I expected to see a sharp decline in those rates, especially during the months that NJ was under strict lockdown: March 16th to June 15th.

I was also curious to see whether any potential decline/deviation effects lingered past the peak of virus deaths & lockdowns. Campaigns, voter advocacy groups, etc. can’t actually “see” unregistered residents - there is (to my knowledge) no database of these people. Campaigns primarily operate off of voter file lists, which are comprised only of those who are registered to vote, meaning that they have limited ability to track down people who were unable/unwilling to register via normal methods (i.e. during a pandemic). Unless citizens who would otherwise have registered during the dates above were proactive enough to register themselves immediately afterwards, it seemed likely that voter registration trends might stay low even as society reopened.

Ideally, the 2020 data would be contrasted with a benchmark developed from voter registration data across multiple presidential election years (2004, 2008, 2012, and 2020). Due to time constraints and a lengthy process of extracting, cleaning, and compiling data from NJ's archive, this was beyond the scope of my research. Additionally, the discovery of incorrect statistics in NJ's archive for January 2016 meant that month's data could not be included, and comparison of cumulative annual trends (January-October) for both years had to be set aside temporarily. After multiple unsuccessful attempts to obtain the correct data from NJ's Division of Elections, an Open Public Records Access (OPRA) request has been filed and is currently pending response.

An analysis of voter registration trends in 2020, especially compared to my benchmark year of 2016, strongly supported my hypothesis that COVID-19 and state lockdown measures had a negative impact on registration rates.

Each bar represents percent change in total voter registration since the previous month's reporting date, providing an accurate measure of month-to-month growth. 2016's data follows an expected trend of two distinct periods of growth, correlating with the events of a presidential election year. Growth starts out slowly but builds quickly through primary season, dropping off after most states have held primaries, followed by a highly similar increase in growth each month leading up to voter registration deadlines.

The initial period of increasing growth through primary season was actually reversed, with the rate of new voter registration bottoming out (interestingly) near the end of state lockdown measures in the Summer.

Breaking our data down by congressional district yields even more concerning results. In 2016, there was only was instance across all congressional districts where net voter registration dipped into the negatives (in other words, less people were registered to vote in the district than on the previous month's reporting date). This occurred near the beginning of 2016 in CD-1. 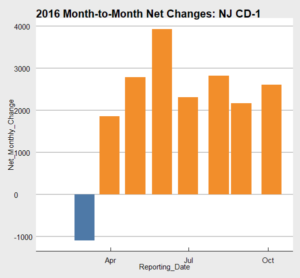 In 2020, however, there were twelve instances where net voter registration neared or dipped below zero, occurring across eight of NJ's twelve congressional districts: 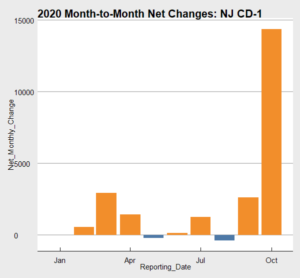 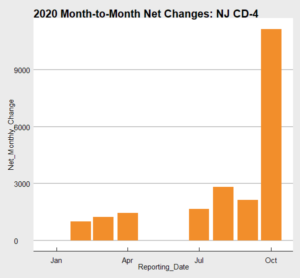 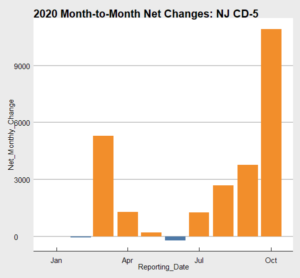 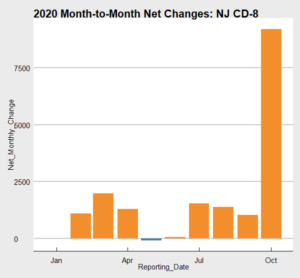 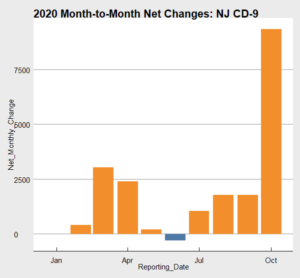 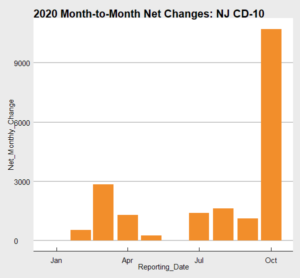 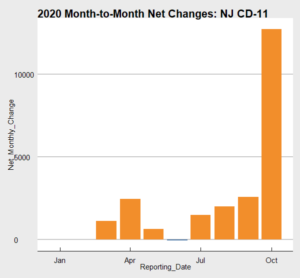 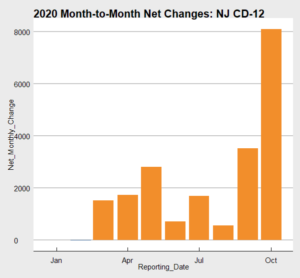 Also consistent across the data, both statewide and by congressional district, was an unprecedented explosion of new voter registrations between September and October's reporting dates. Despite month-to-month net growth percentage never reaching 0.9% throughout 2016, statewide registration increased by nearly 2% during the last available month of 2020's statistics.

These findings have wide-reaching implications. First, the data demonstrated a devastating effect that the pandemic had on voter registration rates during the lockdown period, followed by an overwhelming rush to register close to the pre-election deadline. These observations suggest that local, county, and state governments need to consider aggressive, proactive measures to “recapture” residents that would otherwise have gotten registered earlier in the year - via multi-media PSA’s, government-sponsored registration drives, etc.

From a legal perspective, the clear impact of the pandemic on residents' ability to register during (and even after) the lockdown perspective carries strong weight. These observations, and similar analyses in the future, can be used in support of lawsuits/challenges to extend registration deadlines, permit new/alternative methods of voter registration, and other measures following periods of limited government operations.

Finally, the data has potential implications for the accuracy of polling & forecasting efforts. It’s possible - and perhaps likely - that sampling error/bias has increased during this election year, particularly during observed periods of drastically decreased/increased registration vs historical trends. Because many more people than usual who will vote weren’t registered through the spring/summer, pollsters likely weren’t capturing their opinions/stances at that time as they would have been filtered out during the sampling process. Now, because of a massive influx of new people into the potential sampling population, there may be a false effect/observations of “shifting” opinions - Not because opinions have actually shifted considerably, but because voices that weren’t being captured by pollsters earlier in the year are no longer being excluded during the sampling process.

Users can fully explore the analysis provided above using an interactive R Shiny app. In its current form, the app allows users to explore visualizations of % monthly change across the state and by congressional district, as well as the underlying data behind the user's selections. 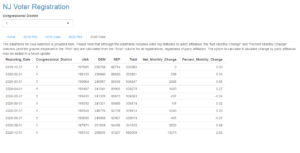 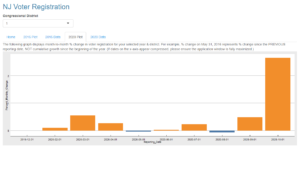 Additional functionality and interactivity will be added in the near future. Assuming a successful OPRA request, January 2016 data will be included soon, which will also permit additional analysis & visualization for annual cumulative trends. If the OPRA request also leads to the procurement of archival data in a format (CSV, excel, etc.) that doesn't require a lengthy extraction/cleaning/compiling process, additional years will be added quickly allowing for a more reliable benchmark. This would also permit the expansion of this app into a more user-friendly version of the entire NJ Voter Registration Statistics Archive. If not, this process may take considerably longer and the scope of the app will likely remain limited to its current purpose.

View all posts by Aidan Hughes >