Contributed by Radhey Shyam. He  is currently in the NYC Data Science Academy 12 week full time Data Science Bootcamp program taking place between April 11th to July 1st, 2016. This post is based on his first class project - R visualization (due on the 2nd week of the program).

According to Business Insider, credit card industry in U.S. was $4 trillion and in comparison, size of the total U.S. economy was $17.4 trillion in 2014. The credit card transactions has been increasing for years and there were $26.2 billion transactions in 2012.

The dataset for this project consists of default payments from a major credit card company in Taiwan and is available at UCI Machine Learning Repository. The data set consists of 30,000 instances and 24 attributes consisting of gender, education profile, marital status,age, history of statement balance, payment status and binary status of default ( 1 or 0).

Next, I created gender contingency table for default (1) and non-default(0) categories:

Then, I wanted to visualize the gender status among two categories of default and non-default.The default status is plotted on x-axis and number of individuals are plotted on y-axis and gender status was dodged on the x-axis.The numerical gender values in the dataset were changed to string values of "male" and "female". 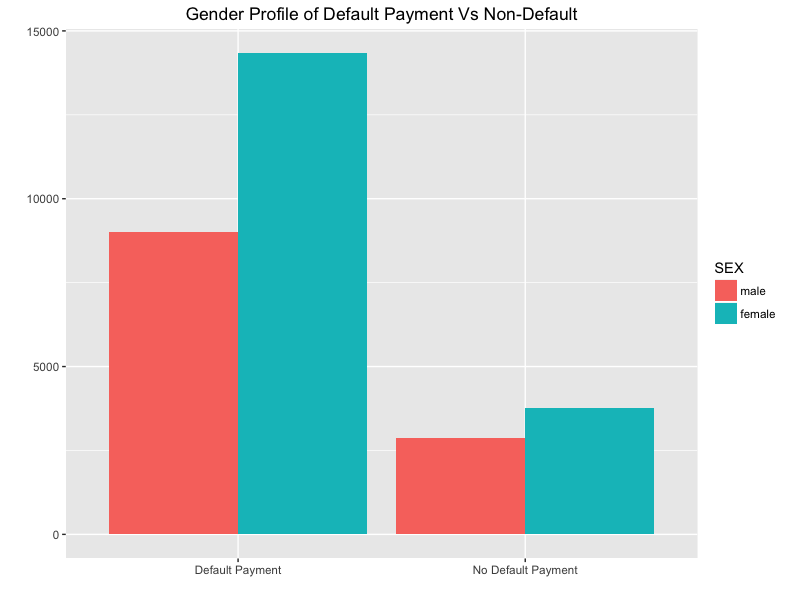 As, we can see from the above bar chart, number of females is higher than males for both default and no default payment categories, but we cannot see their respective ratios. Next, I plotted another bar chart to show the gender ratio and the fill color was based on gender status. 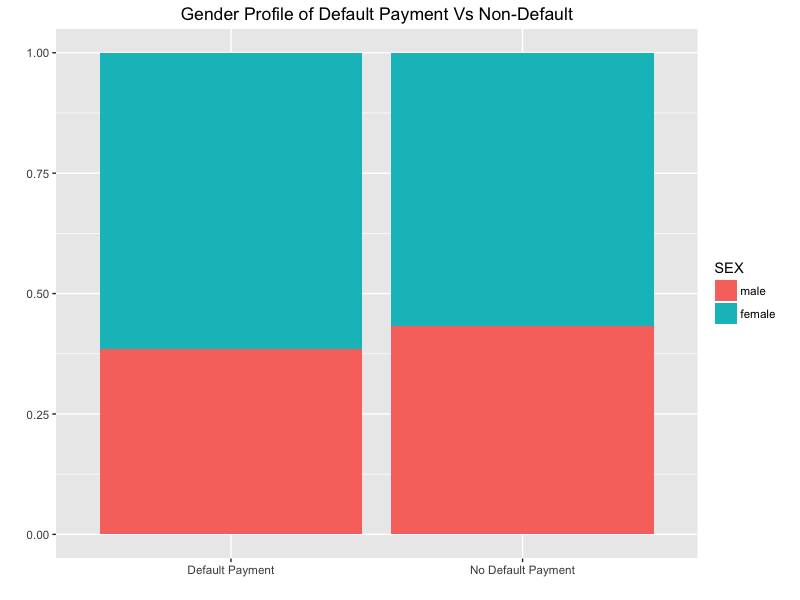 Next, I thought of visualizing education profile of customers . I changed the education numeric value in the dataset to strings and created bar plots for education as factors for fill and default status on x-axis. 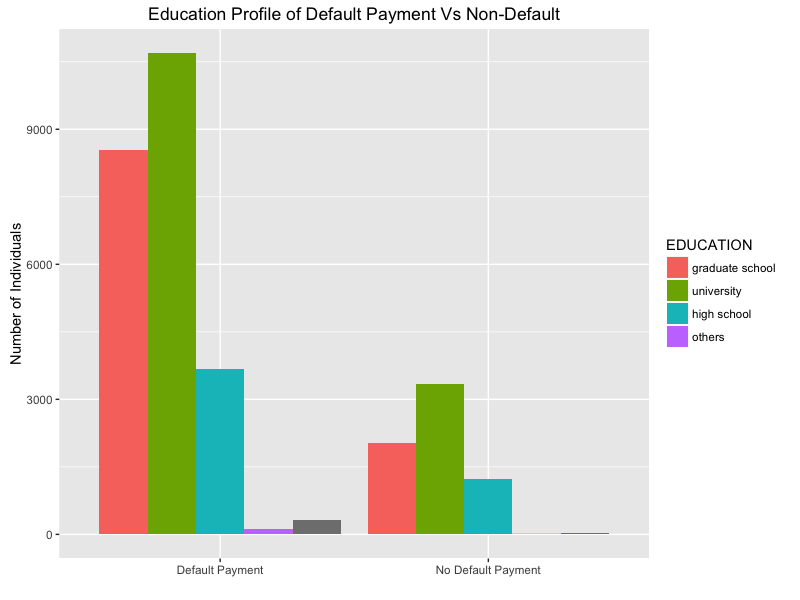 We can see from above bar chart that number of customers having university education is highest,   followed by customers having graduate school and high school in both the categories. To compare their relative ratios, I made another bar graph and this time, education factor was used as fill color. 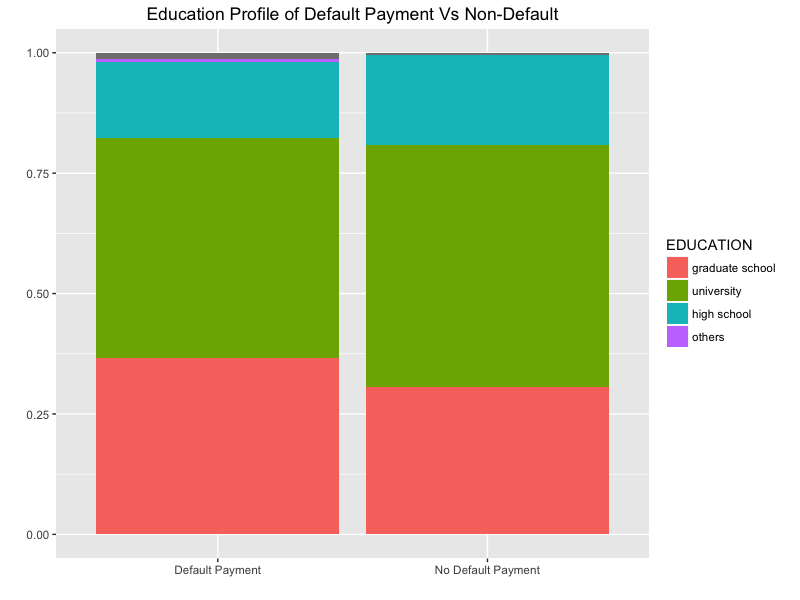 Next, I wanted to compare age distribution of customers in Default Status vs no Default Payment.
For that purpose, I thought that violin plot will be best suited to show the age density among two categories. 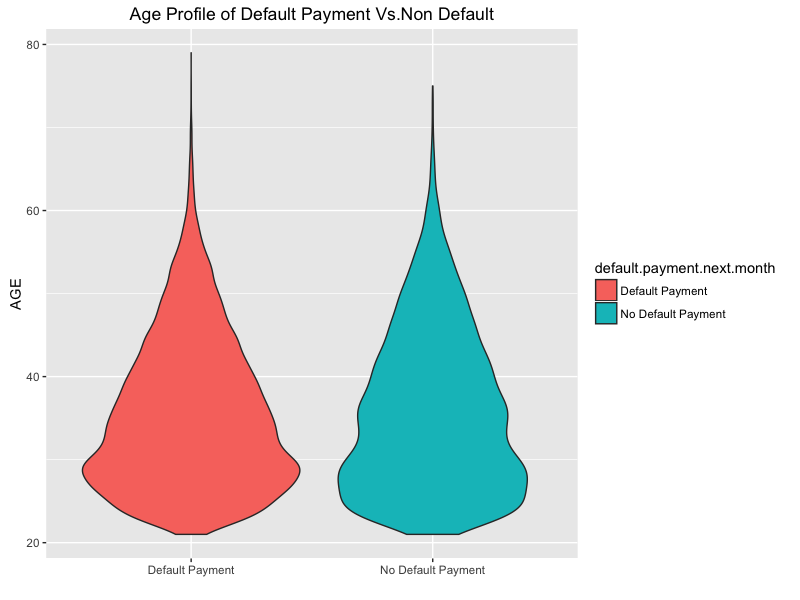 From above age violin plot, we can see that the age peaks around 28 years in the default payment category and then it age goes on decreasing after the peak. To clearly see the peaks, I plotted the age density plots below. 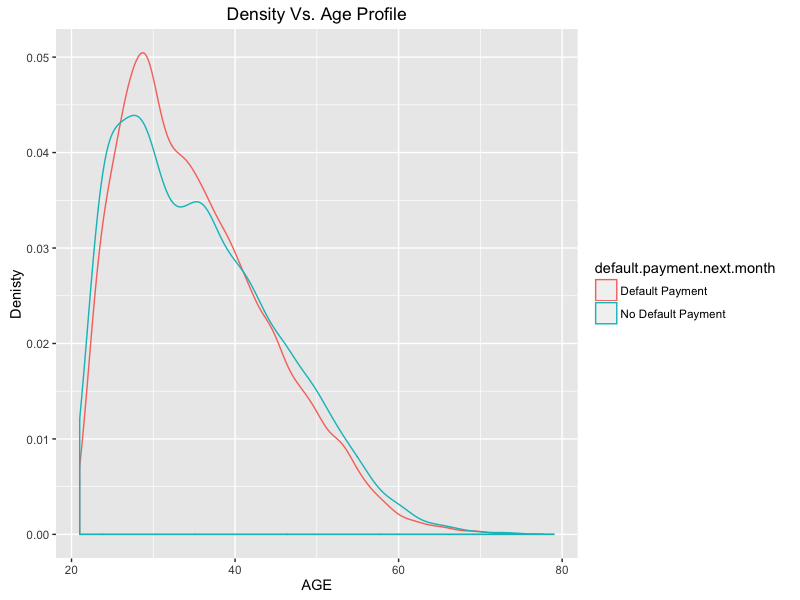 To compare the marital status among two categories, I first converted the numerical values in the data to their respective strings and then created the bar chart 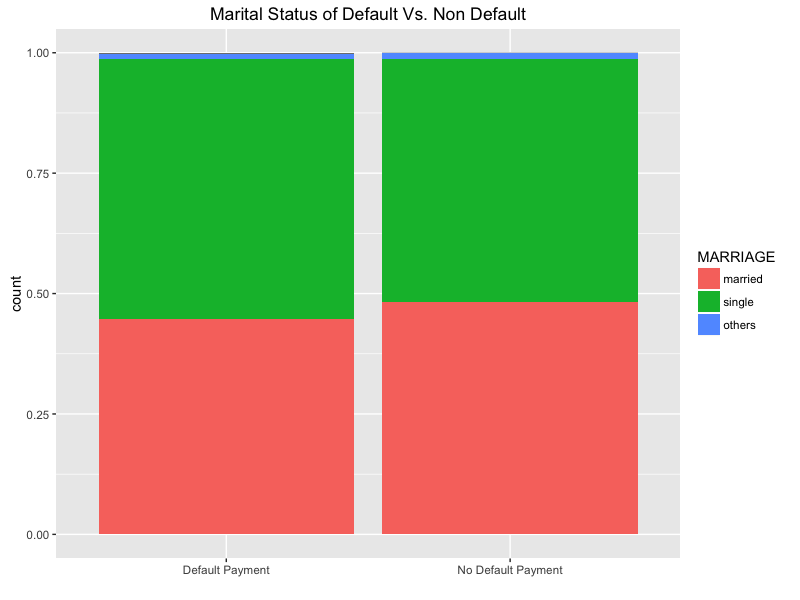 The above bar graph shows the ratio of individuals having single status is higher in default status vs non-default.

Next, I thought of calculating monthly default rate for the dataset to see its trend during observation period (April 2005 to September 2005)  . First, I took the accepted definition of default as  the individuals who have not paid for mare than two months. For calculating the monthly default rate,I divided that number by the total. 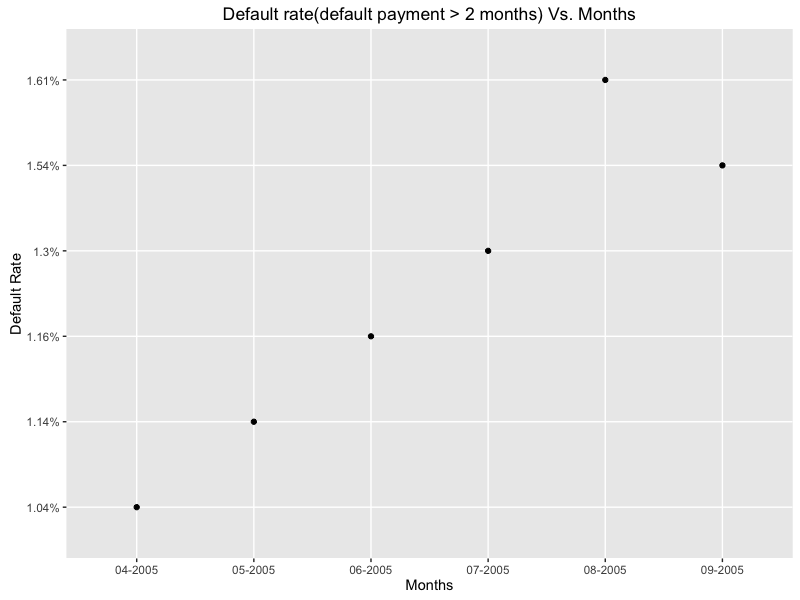 The above scatter graph shows the default rate is linearly increasing from April 2005 to August 2005 and then slowing down in September 2005.

Finally, to find the correlation between Credit Limit, Bill amounts and payment status, I created the following correlation plot. 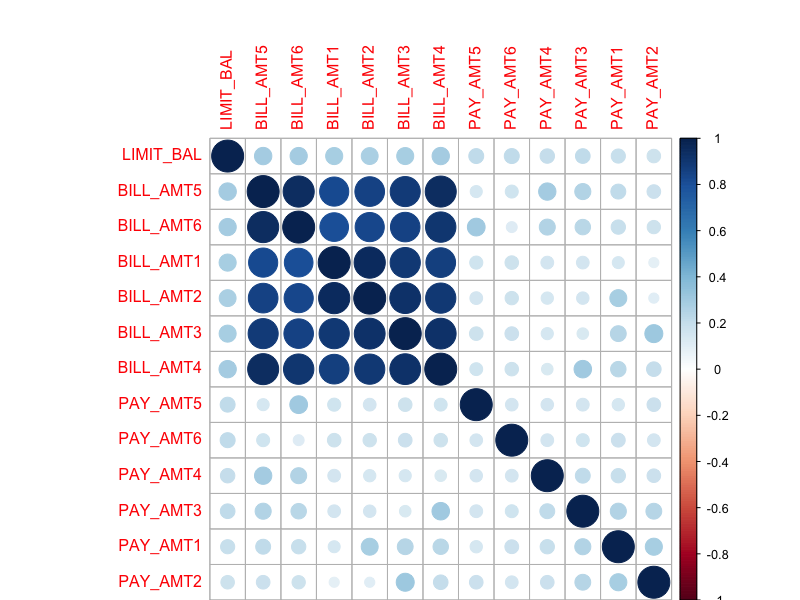 Radhey Shyam received his Ph.D. in Physics from Clemson University, USA and M.S. (Computer Science & Engineering) from GJU of Science & Technology, India. Radhey Shyam did his master's thesis on Network Monitor System, where he applied innovative...
View all posts by Radhey Shyam >

Fredrik Davéus August 14, 2016
Hi, I was just looking at this data set and found this blog post. If I interpret the original data description and also your blog text correctly a value of "1" in the column "default payment next month" means that the person is in default, and a value of "0" in the same column means that the person is not in default. Then I conclude that there is 6636 individuals in default and the rest in non-default. However, your first table seems to suggest that the opposite is the case. Please clarify any mistake on my part. Thanks/Regards, Fredrik

Emilio June 21, 2016
You made some decent points there. I looked on the web for the issue and found most individuals will go along with with your site.