Contributed by Wann-Jiun Ma. He is currently in the NYC Data Science Academy Online Data Science Bootcamp program. This post is based on his first class project - Data Analysis and Visualization with R.

As the college football enters second half of the 2016-2017 season, it is time to examine the performance of each team and predict which team has the highest chance to be the playoff contender for the national championship game on January 9, 2017. In this project, we use the past 10 year (2006-2015) NCAA college football data downloaded from http://www.drwagpicks.com/p/blog-page.html to perform exploratory data analysis (EDA) for college football.

Since the main goal is to predict the result of each football game, the most important question that we should first ask is what features would likely impose a direct impact on the result of a football game. Does a winning team throw less interceptions than a losing team? Is the number of the fourth down conversions a major factor to decide the result of a game? Does a team making more passing completions have a higher chance to win a game? The list can go on and on. So let us start to explore the dataset.

When we download the dataset from the website, each row in the table represents the result of each game played from 2005 to 2015, and columns are the features such as visitor team, home team, and different types of the records of the corresponding game.

There are more than 8202 games played from 2005 to 2015. It becomes easier to play with the data tables if we separate the row to two different rows: one for visitor team and the other for the home team. We should also add a column to store the results of the games. Then, we can use "Group By" to examine the correlation between different features (e.g., passing/rushing yards, attempts, etc.) and the results of the games. We first perform such date table transformations to transfer the table into the forms that have satisfied our needs. All codes can be found at https://github.com/Wann-Jiun/nycdsa_project_1_eda

After the transformations, we are ready to generate our first plot. Let's have an overview of the features. 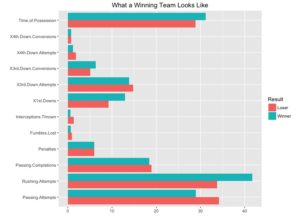 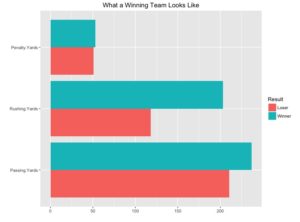 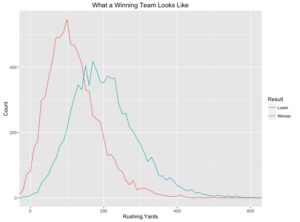 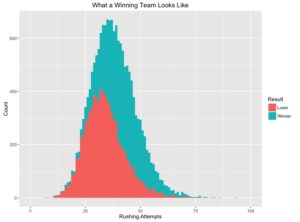 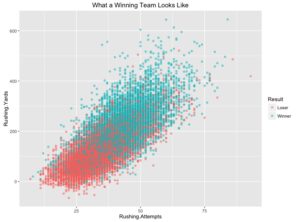 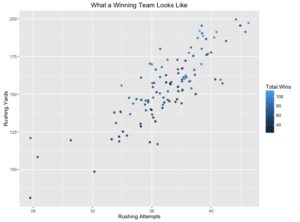 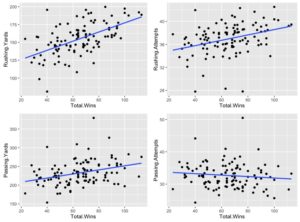 We have not yet explored such kind of relations between each team and the corresponding result of the game. There are certain teams dominating today’s football game. What are the unique characteristics of these teams? Do they run the football more than the other teams? All information generated can help us to build up machine learning models to predict the results of football games.