Data Analysis on Suicide Rates Across the Globe

Suicide is a topic that has been avoided until more recently. This is due to the fact that it is a naturally sensitive topic and there is a stigma that is associated to it. There are movements that have led the way for more mental health awareness from the government level to the college level and so much more. Through this Shiny app, I wanted to delve into the data of suicides itself, in order to produce visual representations that could highlight some notable issues that the general conversation around this topic may not be discussing.

For this project, I segmented the project into three different R files. One was the global file, which imported all of my libraries necessary for this project, loaded in the raw dataset and cleaned it accordingly.

The second file was my UI file which incorporated all of the features of my web app. In this file, I had to incorporate the shiny dashboard which made a layout for all the tabs my web app would use. There were 5 different tabs that I segmented my app into and each one contained specific areas of interest I wanted to focus on. In this UI file, I also had to incorporate slider inputs, radio buttons and more so that the user could control the features of the app in order to hone in on specific details of the dataset.

In the server file of this app, I had to make sure that everything in my UI side was rendered properly in order to display all of the graphs, maps, images, links, etc. so that there would not be any errors when a user would change inputs.

In this file, all of the libraries that were needed for the data manipulation, front end development, and back end development as well as the dataset itself were imported in. Using the dataset and the tidyverse package, I was able to clean the data appropriately according to what needed to be displayed on the web application itself. 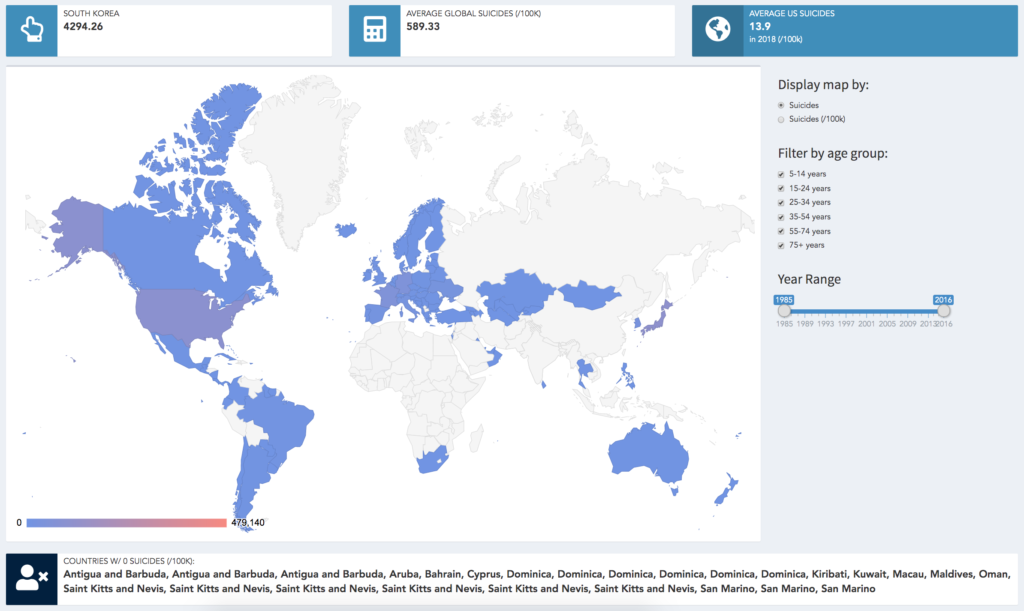 In the user interface file, I incorporated several components while utilizing the shiny dashboard: a header, a sidebar and various menu tabs within the sidebar. Besides just information about myself, the header and the user panel of the sidebar were not relevant to the dataset.

For the menu tabs, there were 5 different ones I wanted to incorporate which were broken down into Maps, Graphs, Machine Learning, Data, and r/oddlysatisfying.

The maps tabs was primarily to display the world map with all of the suicide rate data points for each respective country (Figure 1). This was also supplemented by adding in a color gradient which denoted which country had the highest number of suicides or suicide to 100,000 people ratio, with blue being least and red being most. The top three information boxes showed the country with the highest measure for whichever filters were checked as well as the average global suicides per 100,000 people and the average number of US suicides in the year of 2018.

The radio buttons on the right of the map were to toggle between how the user wanted to display the map. Using the checkbox group inputs on the right of the map as well, the user could filter and see a reactive element to the map UI depending on what inputs were selected. Finally, the countries listed at the bottom were ones that had 0 suicides for the particularly filtered data or had negligible ratios of suicides to 100,00 people. 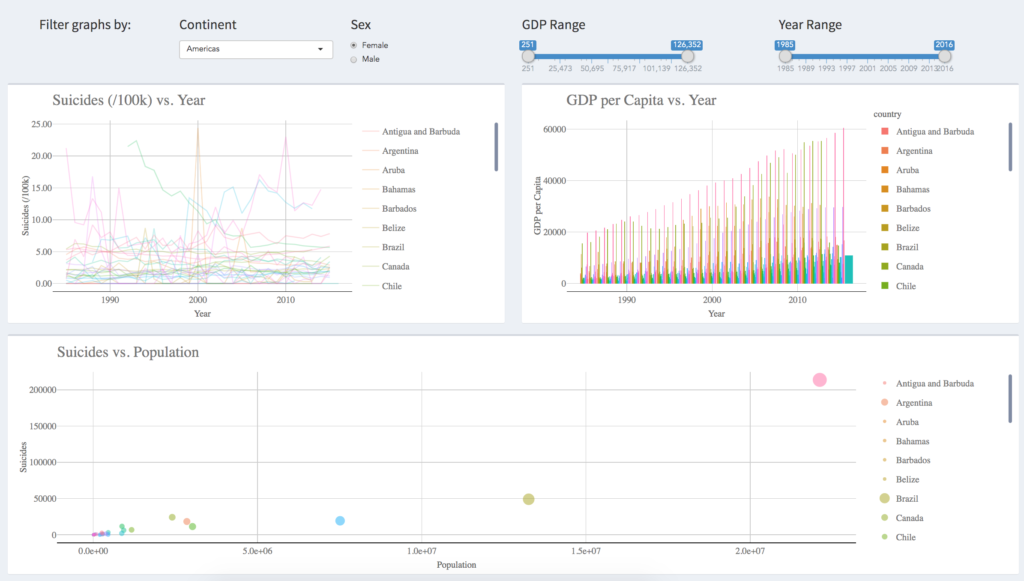 The graphs tab had a similar feature as the maps tab where the user could filter the data according to a specific continent, GDP range, and more. With this filtered data, users were able to turn off and on countries by double clicking in order to clearly see the trends using the three graphs displayed on Figure 2.

For the machine learning tab, I wanted to try out a kmeans clustering method but did not standardize the values and ended up coming up with odd results. This is an aspect I could work on further in the future.

The data tab contained the raw depiction of the dataset itself so that the user could see what it looked like before the data visualization was outputted.

For the final r/oddlysatisfying tab, I referenced one of Reddit's subreddits and made a gif with a time series graph showing how the number of suicides changed as years went by. I also used one of the gifs to compare five countries to show a visualization of how GDP and suicide numbers fluctuated throughout the years.

The primary function of the server side of the web application was to implement reactive elements that would respond to the inputs that the user would check off. On top of this, the server file had to properly render the graphs, map, and various boxes throughout the app so that there would be no errors in the display with each input.

The server file was segmented by each tab in order to organize the code well.

Through this app, I realized that it is important to consider which filters to incorporate when building an app as well as how the data should be reactively implemented in order to apply those filters.

I want to be able to do further data analysis with this app and dataset myself. I believe there is a hidden potential in this dataset that could be tapped into by incorporating more machine learning methods.

Feel free to try fiddling with the app yourself!

Wonchan graduated from the University of California, Los Angeles with a B.S. degree in Materials Engineering and a minor in Statistics in 2019. Wonchan has proven acumen in business applications and experience tailoring data analysis and machine learning...
View all posts by Wonchan Kim >