Data Analysis on the Usage of Credit

Each loan that is approved poses a potential risk to the bank. The risks is that the borrowers will not pay back the money in a timely manner (default) or fail to pay at all. According to S&P Global data, default rates in May 2021 ranged from 0.28% for first-time mortgages to 3% for credit cards, and impacts have accumulated to $4.6 billion in 2021 so far.

With losses of billions of dollars each year, banks have developed sophisticated methods to evaluate credit applicants before approving a loan. Often banks have dedicated teams for this task that consider variables such as credit history, capacity to repay, capital, loan conditions, collateral, and more.

This study will use exploratory data analysis and an anonymized credit default data set to understand if there is a characteristic group of people that is more likely to default on their credit.

The data was recovered here. The anonymized data is composed of geographic data, as well as data of previous applications and credit status of 222,733 individual credit holders. While the data set included many different variables, this study will use only a handful , such as gender, age, income, education, credit amount, and previous application status.

Some variables not included here are housing conditions, living area, means of contact, employment type, and others.

The credit type here, was mainly cash loans, with only 8% of revolving loans. Hence, the findings of this study should be considered in this context rather than implying the results found here for other credit types, such as mortgages, car loans, and credit cards.

All code can be found on GitHub, here

When exploring the most common characteristics of current credit holders, independent on their default status, a surprising 63.5 % of the clients are female. Most commonly the age of a typical credit holder is between 30 - 60 years old (80%), of which the 30 - 45 age range is represented 20 % more oft than the 45 - 60 age range. 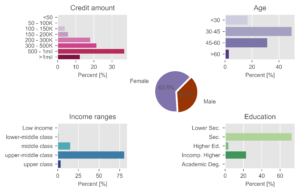 Overwhelmingly, most credit holders have a secondary degree, with income in the upper-middle class (income of $100 - 350 K a year).  Very few clients have lower secondary degrees or incomplete higher degrees. Also,  maybe surprisingly, far fewer clients have incomes below $55K. The most common loan amount is between 0.5 and 1 million dollars with very few loans below $150K.

The most common client currently holding a credit, is a married female, between 30 - 45 years old, with a secondary education, and an income in the upper-middle class, holding a credit between 500,000 and 1 million dollars.

Who Defaults on their Credit?

Overall, the default rate of the 222,733 individuals is 9.6%. Because most credit types in this dataset are cash loans, the default rates on the other type of loan, the revolving loans, are also much lower.

While 27% more female clients exist in this dataset, men are the ones more likely to default on their credit. In particular, 11.5% of men default on their line of credit, while only 8.5% of females defaulted. Most credit holders that are not able to pay their credit are younger than 30, an age group that only represents 18% of credit holders overall. In fact, the older the client, the less likely they are to default.

Surprisingly, there is no dramatic difference between what income group is most likely to default. On the contrary, it seems like all middle class income groups are equally likely to default, while upper class and, surprisingly, lower income classes are  1 - 3% less likely to default on their loan. However, while only very few clients hold a lower secondary degree, the default rate in this education class is the highest (by 4%) amongst all degree types. Amounts below $100K are paid back most consistently.

Also surprising it is not higher credits that are less likely to be paid on time, but credit amounts between $300 - 500K. Noteworthy is the fact that loans that are defaulted are on average $27K lower than the ones that are paid on time.

Who is rejected most frequently?

With these profiles in mind, it is worth asking if banks are rejecting the typical person that is likely to default (male, <30 years, middle class, lower secondary education, credit between $300 - 500K). The graph above shows, that about 12.7% of previous applications were in fact rejected, while about 8% were approved. A number of loans were either not used or cancelled.

Only the age profile is in agreement between the "default profile" presented above, and the applicant that is rejected most frequently. It is surprising to see that the other criteria are not  reflected in the rejection data. Instead, both, male and female applicants, are rejected at equal percentages, even though females are in fact more likely to pay their loan back on time. There is also no obvious difference between rates at which applicants with higher, or lower degrees are rejected, even though it was predominantly loan holders with lower secondary education that defaulted on their credit payments.

Considering that facts like the ability to pay back the loan are taken into account when considering loan applications, it is surprising that applicants with higher income are, in fact, rejected more frequently than those with lower income. Maybe not surprising, on the other hand, is the fact that applications for larger loans, specifically more than $1 million make up 57% of all rejected applications.

The exploratory data analysis approach was able to identify three main profiles of credit holders/applicants: A current credit holder, (married female, 30-45 years old, with secondary education and a credit amount of 0.5 - 1 million dollar), an applicant that is most likely to be rejected (male or female, below 30, with a higher education degree, and an income in the upper classes, asking for more than 1 million dollars), as well as a credit holder that is most likely to default on their credit (a male below 30, with an income in the middle class and a lower secondary education, that has a credit amount of $300,000 - $500,000).

This shows that most rejections are not in line with the profile of the person that is most likely to default on their credit.

However, the dataset provides many other variables that could and should be used to examine the credit/default/rejection profiles further. This, as well as exploring relationships between variables would be helpful to further refine the work presented above. It is also possible to apply predictive models to this dataset, which would allow for a more quantitative analysis of relationships between variables and applicant profiles and behavior.

The data presented here had very little documentation, and presents credit amounts as cash. However, the amounts are large and more similar to mortgage amounts than cash credits. It would be interesting to explore different credit types (home, card, car, cash, etc) separately and understand if profiles hold true across these different types of loans. Potential differences might exist and would help banks to further narrow down their understanding of their clients and lower their credit risk.

Lena is an NYC Data Science Academy Fellow with a PhD in Physical Oceanography from the University of Southampton in the UK, where she used lagrangian particles in an ocean model to track freshwater from Greenland. After her...
View all posts by Lena Chretien >