From a casual cocktail by the pool to a celebratory toast, alcohol frequently plays a part in our social lives, but it also plays an important role in our economy. In the US alone, data shows consumers spent $117.3 billion on beer, $72.2 billion on wine, and $64.3 billion on spirits, totalling $253 billion spent on alcohol in 2018 [1]. Beyond its size, the alcohol industry has also shown resilience through recessions, making it both a profitable and stable industry.

Our purpose is to provide useful insights and recommendations for stores selling class ‘E’ liquors, aka spirits or hard liquors like gin and whiskey. We derive these insights with retail analytics, the process of providing analysis on sales trends, inventory levels, and consumer demand, which are crucial for making marketing and procurement decisions that can increase profit margins, minimize overstocking costs, and identify other processes in a business that need improvement.

The data used in our study come from the Alcoholic Beverages Division of Iowa which maintains a record of alcohol sales in Iowa to establishments with class ‘E’ liquor licenses for off-premise liquor consumption. The data set contained 19.4 million transactions or observations, spanned eight and half years from 2012 to 2020, and included 24 features that detail sales date, sales volume, sale price, and descriptions for the products, stores, and vendors.

This dataset contained many inconsistent values including:

First, to make the data more manageable, we created a relational database using sqlite and divided up the features into smaller tables to clean up these inconsistencies. Below is the entity relationship (ER) diagram for the relational database. 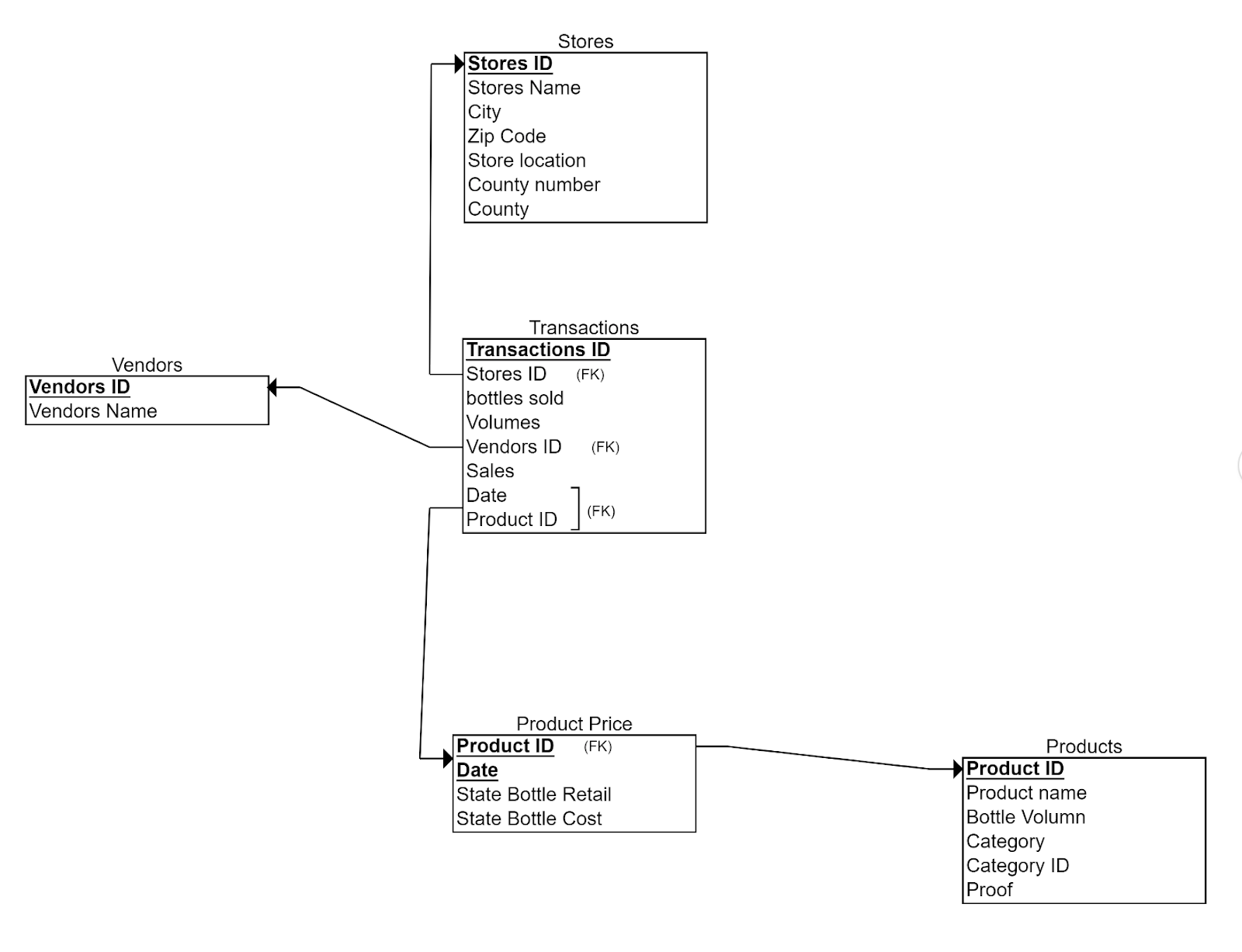 There are five tables in the database:

Then we used a majority vote to clean up the inconsistent values for each table. For example, for the vendor table, we counted the number of times an ID associated with each name and used the most frequent pairing as the unique mapping for that ID. This allowed us to use the vendor ID as our primary key for the vendor table in our relational database. We applied the same methods for the store, product, and product price tables as well.

It may not make sense to place a store in a rural location with fewer potential customers, but opening  a new store in a densely populated area could mean fierce competition from other nearby stores. Therefore, identifying a store’s location as rural or urban can be important as strategies for success can differ between the two. We wanted to ask:

To classify the stores as urban or rural, we used DBscan to form clusters based on the stores’ proximity to each other. Stores closely packed together, were assigned to a cluster, while outliers were assigned as noise and not assigned to a cluster. Below is the resulting eight clusters (red) and their noise (blue). The county population is also shown in shades of green. All clusters overlaid major cities, so we labeled all clustered stores ‘urban’ and all non-clustered noise ‘rural’.

Which types of stores sell the most alcohol? 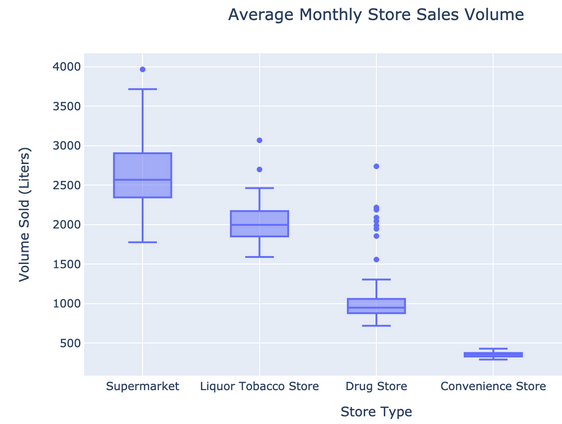 Which stores survive the longest? 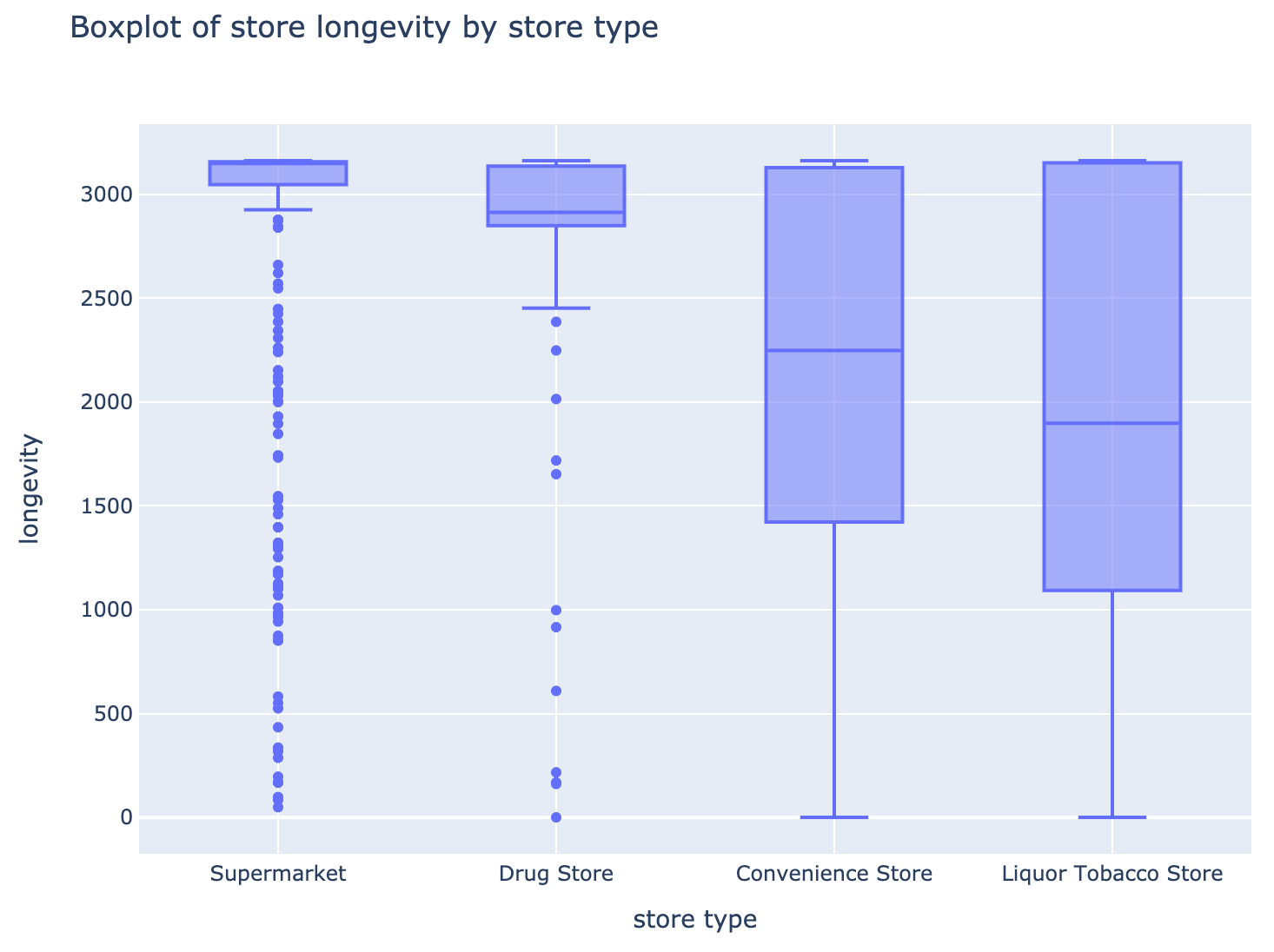 The above plot shows a store’s longevity in days. On average, supermarkets last the longest and liquor/tobacco stores the shortest.

If we look at their survival curves, we can see supermarkets have a low closure rate and convenience stores and liquor/tobacco stores have a higher closure rate. Interestingly drug stores seem to have a low closure rate until year nine, but this is due to a large number of drugstores emerging a year after the start of the dataset and continuing on to 2020. This drop from 8 years to 9 is really a reflection of some drug stores being a year behind and continuing to survive to present times.

Data on the Stores Entering the Market

We also look at the number of new stores emerging each year. The majority of the stores emerging are convenience stores. It is interesting to note that there was a policy change in Iowa in 2011, a year before the start of this data. That year, convenience stores were granted the ability to sell liquor for off-site consumption which led to an increase in the number of stores that applied for class ‘E’ liquor licences. These stores were consequently included in the data and this growth trend in convenience stores may be due to this policy change.

The above plot shows us the average monthly stores sales volume of the store types in urban (red) vs rural (blue) locations, with the 95% confidence interval represented by the error bar (black line). Supermarkets in urban areas sell significantly more than those in rural areas, nearly 2.5 times more.

How are stores growing over time and are they competing with each other? 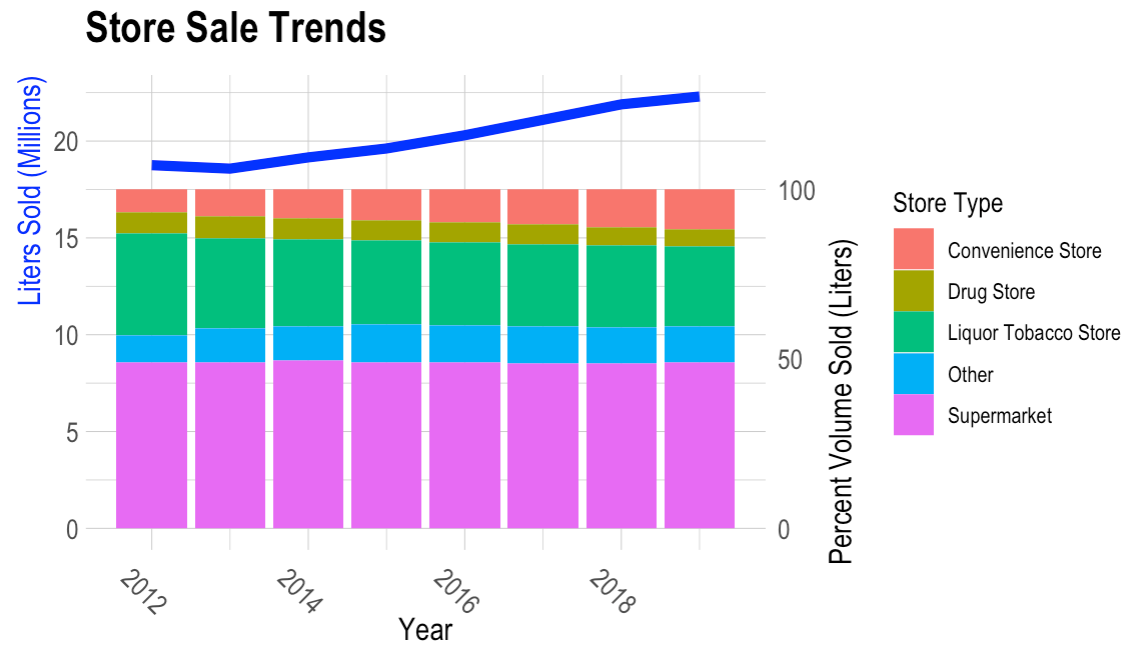 Below in Figure 1, we break down the information into three graphs and connect the general trends. Figure 1a shows the total sales volume for each category. For supermarkets, in purple, total sales are increasing. Figure 1b, shows the number of stores selling alcohol each quarter. Here the number of supermarkets stayed constant and started growing in the last couple of years.

If we look at convenience stores now in blue, we see again their overall sales are increasing, but really this trend seems to be driven by its massive expansion of stores (Figure 1b), because its average quarterly sales stay constant (Figure 1c). Recall from the stacked bar plot that the proportion of sales from convenience stores has been increasing, it looks like this trend is driven by an increase in number of stores.

Finally let’s look at liquor stores in green. From the stacked barplot, remember that the proportion of sales for liquor stores looked like it was decreasing. We see that it does look like quarterly sales are decreasing as well, but it does not seem like that is driven by the number of stores, as this is increasing slightly. On average liquor stores are faring worse over the years, selling less on a per store basis.

Is the growth of the convenience stores or supermarkets contributing to the downfall of liquor stores? To explore potential competition between store types, we used market basket analysis whose purpose is to find hidden patterns in transaction records: what products are most frequently bought and which of those are bought together? We applied a market basket analysis on each of the store types and compared their results to detect similarities. Stores that sold similar items and held similar patterns could be in direct competition with each other. 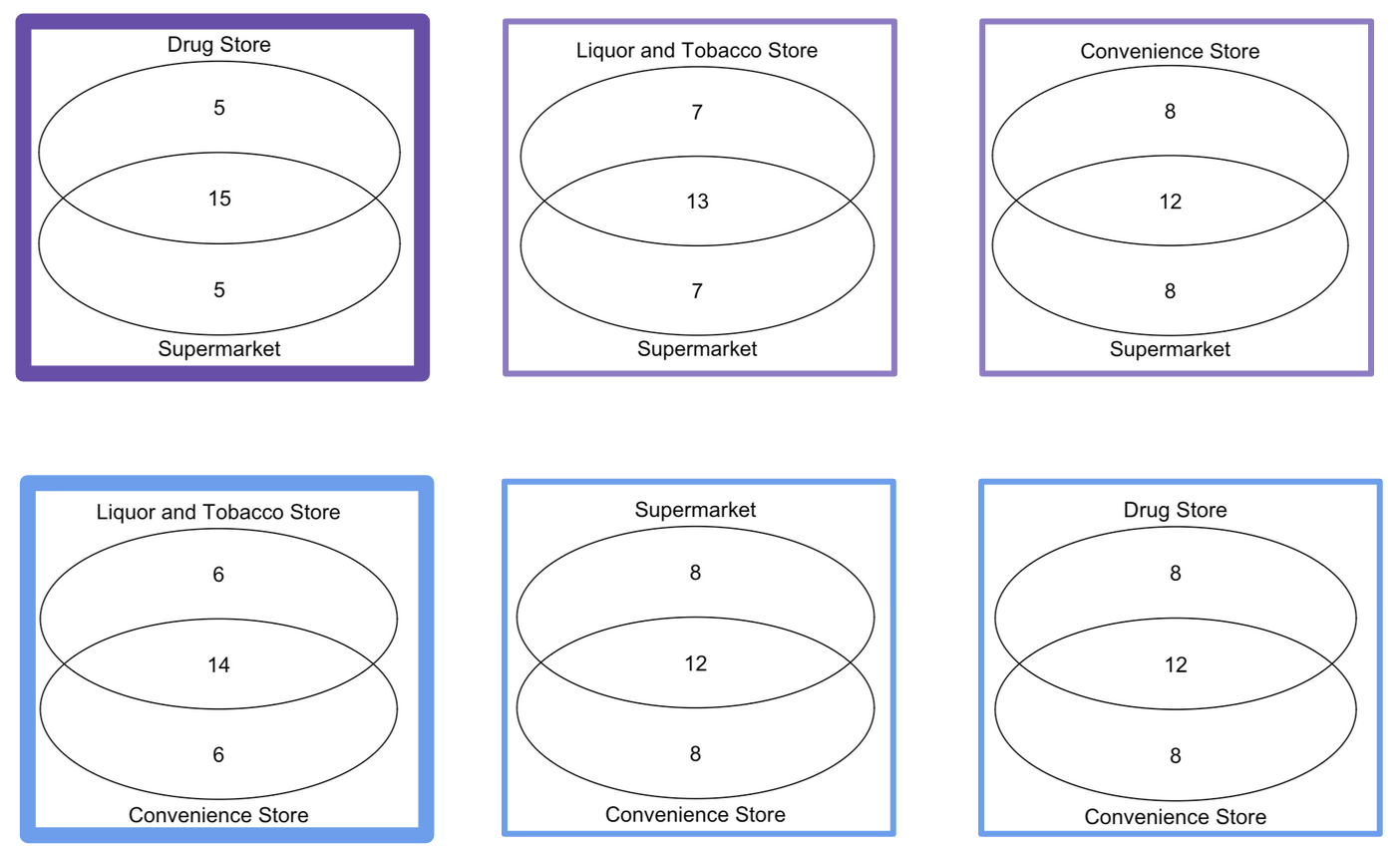 We also looked into the demand patterns of different store types by using K-Means to group all the individual stores into three clusters, based on their normalized annual sales volume in the past 10 years. We normalized the sales volume to focus on the trend regardless of the scale of the volume. Also, we filtered out stores that only present for a short period of time and kept those that were in business during the entirety of 2012 - 2020. This left us with 989 out of 2500 stores.

The above graph shows the average annual sales volume trend of each cluster.

After further investigation, we found that cluster 1 has the highest percentage of liquor tobacco stores and the lowest percentage of convenience stores which might account for the drop in sales volume.

The next step in our analysis was to look into the liquor products to understand the dynamics of different types of liquors; their popularity, sales channels, and seasonality of demand.

There were over 9000 unique liquor products sold in Iowa in the last 10 years which we categorized into 10 alcohol types based on their product descriptions. From Figure 2a, we can see whisky and vodka have the highest overall sales volume. The two combined occupied over 60% of the entire market. Following whisky and vodka were rum, liqueur, tequila, cocktails, brandy, and gin.

The stacked bar graph in Figure 2b shows what categories of liquor each store type carried. Convenience stores and drug stores had a higher percentage of vodka and whisky while liquor stores and supermarkets had a greater percentage of other types of alcohol, potentially representing a more diverse stock. 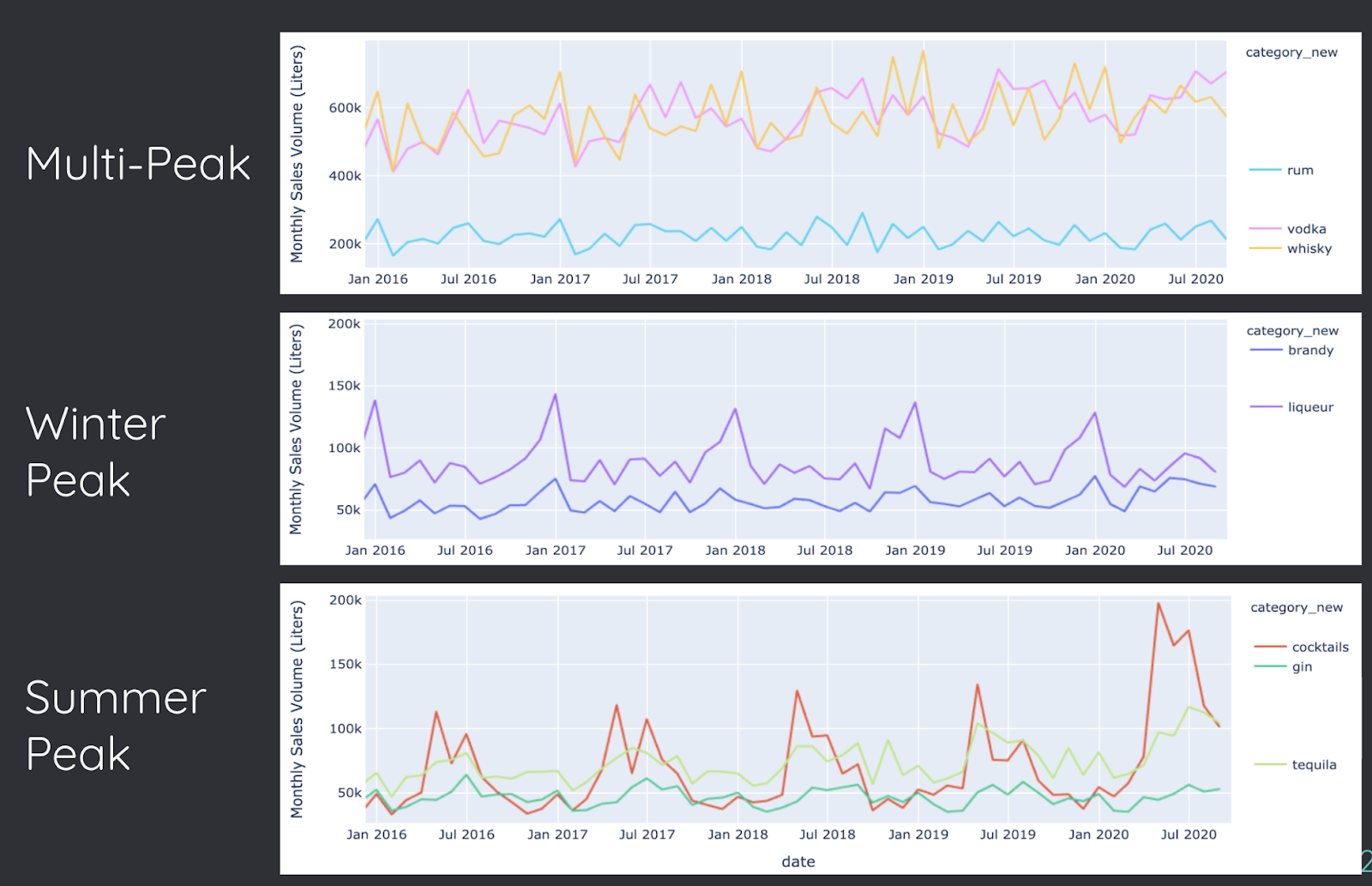 Next, we examined the seasonality of demand for different types of alcohol. From the graph above, we can observe some clear seasonality patterns:

Finally we looked at the top 10 most popular products and their sales channels. The top 10 products were sold in 1840 stores out of the total 2500 stores. For comparison, a given product was sold in only 28 stores on average, leading us to believe that sales channels is playing a big role in the success of a product. 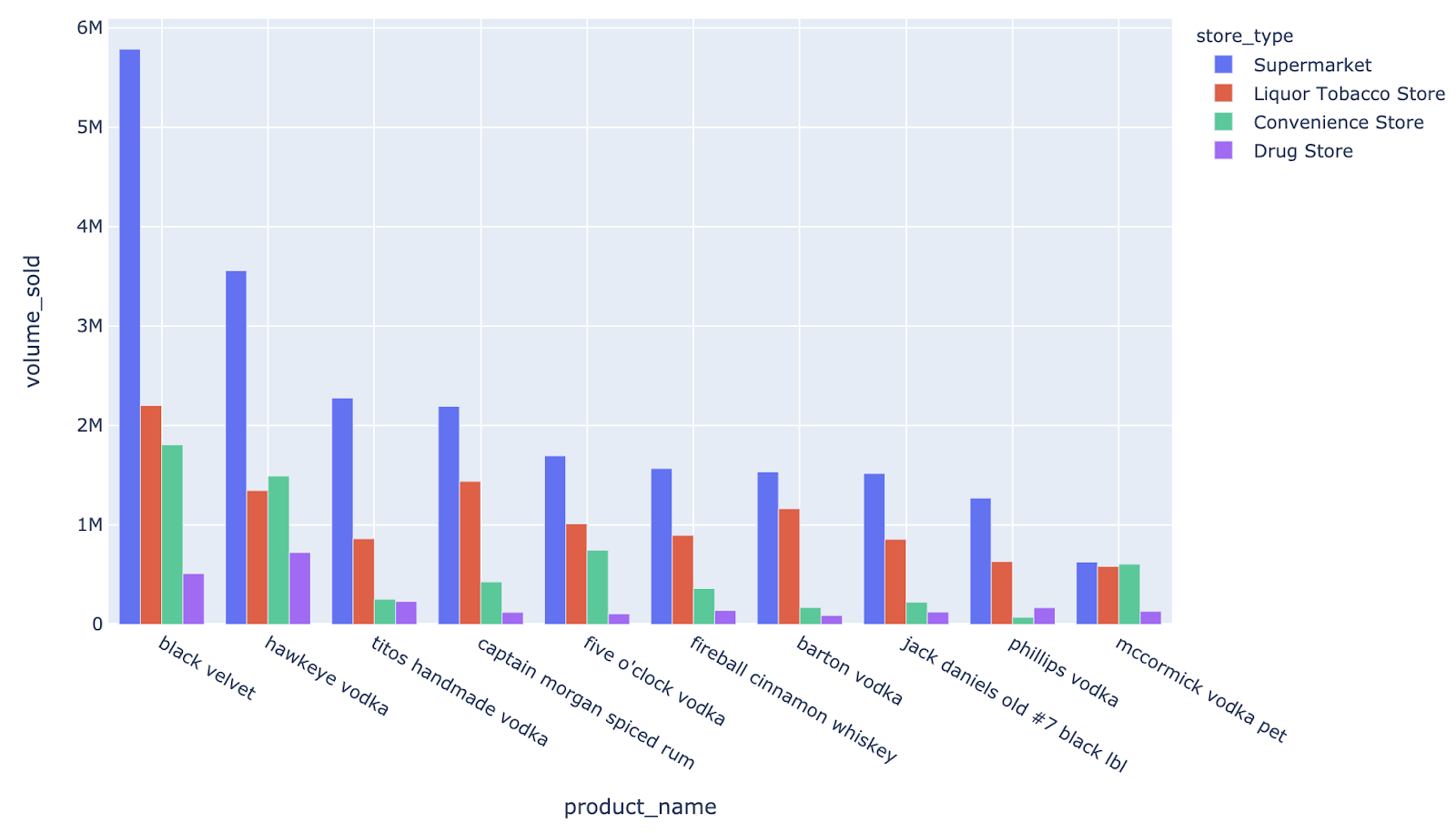 The graph above shows the sales volume for each of the top 10 products broken down by store type. As the overall sales volume increases for those products, the proportion sold in supermarkets also increases. This makes sense because as we mentioned in our store analysis, supermarkets were the leading in both total sales volume and individual store sales volume.

Demand forecast and inventory management are important tasks in e-commerce and retail industry to maintain profitability. We used the ARIMA model with seasonality parameters to forecast liquor sales volume. We used a top-down approach to forcast total demand and then focus on specific store types and product categories. The general process we took to build the ARIMA model are as follows: 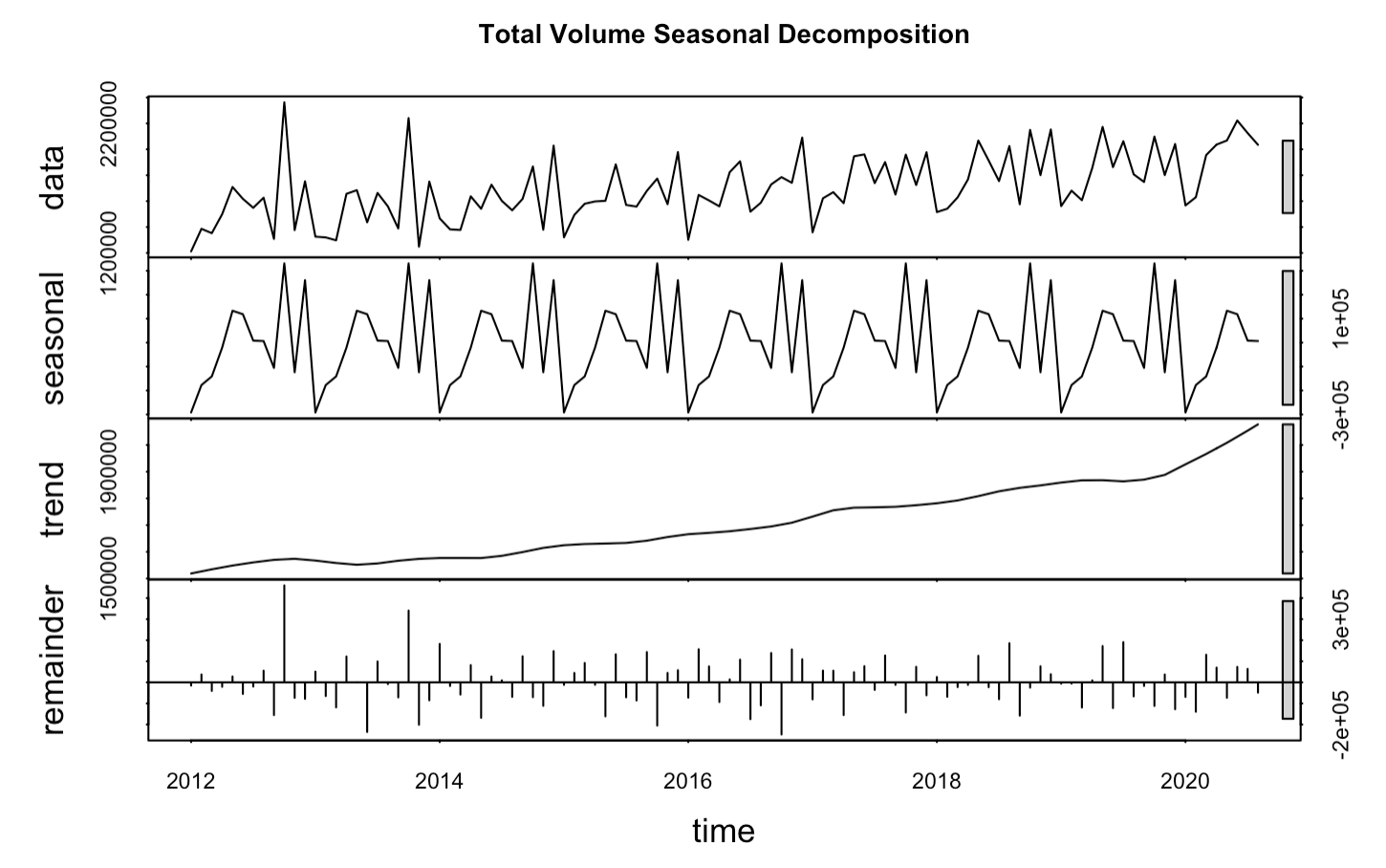 From the seasonal decomposition above, we can see that the total volume time series data can be decomposed into a trend and a seasonality factor. The residual from the decomposition shows no significant patterns, which is a sign that the ARIMA model is appropriate.

We used the first 75% (January 2012 - June 2018) of the monthly data as training, and the latter 25% (July 2018 - August 2020) as test data. The MAPE (Mean Absolute Percentage Error) of the training and testing sets were 4% and 5% respectively. From the two graphs above we can see that the ARIMA model was able to capture the fluctuation patterns pretty well.

Our analysis included many aspects of the liquor market in Iowa, including location, store competition, and products. To tie everything together, we’ve created a condensed version of recommendations for each store type, shown here is the supermarket example. This 360-Degree review aims to give supermarket owners or investors in the liquor business the most relevant information they need to know in order to open or maintain a store. 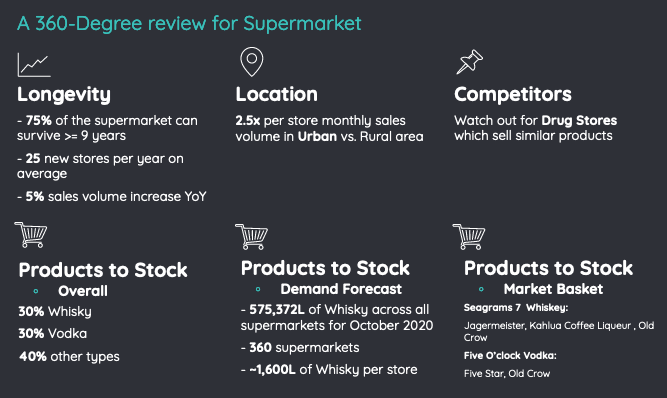 If you have any questions or comments, please feel free to reach out to any of us on LinkedIn or GitHub.

Data Scientist with five years of lab manager experience in microbiology and ecology. Strong research professional with a Bachelor's degree in Integrative Biology from University of California, Berkeley. Excited to generate data-driven insights to drive business value.
View all posts by Judy Chung >