The main objective of this project is to build an interactive app to process and analyze genomic data with the objective of identifying new stem cell populations in mouse brain. Characterizing the unique gene expression signature of these cells could be the starting point for finding and defining cancer stem cells (CSC) in human tumors, particularly glioblastoma,   the most common malignant brain tumor diagnosed in adults. Despite numerous advances in cancer therapy, these tumors remain incurable, suggesting that current treatments fail to target the cells responsible for tumor growth. One possible explanation for this would be that CSCs are resistant to current therapies and responsible for tumor remission.

The dataset that I used for this project is the result of dissecting a specific part of a mouse’s brain (dentate gyrus, responsible for learning and memory), dissociating the cells into a single cell suspension and performing Next Generation Sequencing on individual cells. In particular, single cell RNA sequencing. This technique allows the quantification of all the RNA transcript of each individual cell. We quantify RNA instead of DNA because whereas the DNA content is the same in every cell of our body, the RNA expression profile uniquely defines a cell’s identity and function. It is what distinguish a skin cell from a neuron.

After filtering low quality cells, the final data object had 18572 rows and 17922 columns. Each row corresponds to a gene, and each column corresponds to a cell. The values in the database are a measure of the RNA expression of each gene in each cell. Each cell expresses an average of 2048 genes. The size of next generation sequencing genomic data -- in this case the processed database --consumed 3.2Gb of memory, makes Data science and machine learning algorithms indispensable tools for handling this kind of  big data. 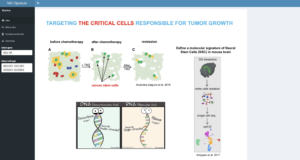 Next, we are going to determine the identity of each cluster based on known marker genes. As this is unpublished data, the real names of the clusters are not shown. After filtering the data, I performed a clustering analysis based on K-nearest neighbor KNN algorithm. The resulting plots are called t-SNE (T-distributed Stochastic Neighbor Embedding) plots. In these plots, each cell is represented by a dot (hence each dot summarizes the information of all the rows and columns referred to the expression levels for one single cell). The spatial proximity between the dots is related to the molecular similarities. Therefore, cells that cluster together belong to the same cell type.

In order to define “who is who” and where  our stem cell populations are, we have to interrogate the gene expression of the different clusters. For example the genes Gfap and Id4 are known to be expressed in astrocytes and stem cells; therefore, we know that the highlighted groups are astrocytes (here “cell type b”) and stem cells (here “stem cell 1” and “stem cell 2”). Other genes   such as Rbfox3 and Syt1, are known to be expressed in neurons. Consequently, by selecting those genes in our app, we can assign the highlighted clusters to neuronal populations.

Going through different gene expression profiles, with the help of this interactive tSNE plot and dot plot, we figure out which cluster belongs to which cell type and, most importantly, where our stem cell clusters are. In particular, I was able to find a new SC cluster, here called “stem cell 1” that is related to the previously identified, here called “stem cell 2”. 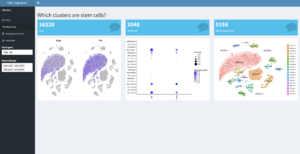 After clustering, I used machine learning algorithms to further determine the relative location of each cluster in the neurogenic differentiation trajectory. I used a semi-supervised ordering mode to order the cells along the trajectory based on known marker genes that define the biological progress through the neuronal differentiation process and other (1000) genes that covary with them. Once the algorithm has learned the specific trajectory of expression changes, it places each cell at its proper position in the trajectory all the way from the most primitive stem cell state to a more differentiated neuroblast, going through the intermediate NPC (Neural Progenitor Cell, here called “cell type b”) state.

The left panel shows the stem cell to neuron differentiation trajectory, and the right panel shows the expression of specific genes along developmental Pseudotime. As seen in the plot below, stem cell genes like Gfap and Id4 start high and end low.  When selecting neurogenic genes in the app, such as Dcx and Calb2, we can confirm that they start low and end up high as expected.

In addition to finding the “developmental” order of our clusters, I could see that the newly discovered stem cell cluster (“stem cell 1”) starts at the beginning of the trajectory, supporting that it indeed corresponds to a stem cell cell population. 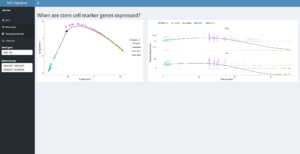 So far, we have identified the different cell types, including the stem cell populations, we have reconstructed developmental time and finally it is time to find new genes, new NSC markers. 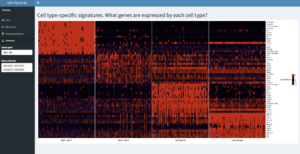 Link to the app

This blog includes unpublished data and is not intended to be used for submissions or citations.