Data Scraping The Relevance of Chord Progression in Music

Before anything else, I want you all to check out this video:

What this basically shows is that with just four chords played in the same sequence, you can perform dozens and dozens of songs. The data shows all you need to learn to play the guitar or piano or whatever instrument you like are the following chords: D-A-Bm-G. A total of 47 songs were played in this medley using the same chord progression.

For the uninformed, here's a tiny bit of introduction about what chord progression is about.

We all know about notes. These are dots on a series of lines like the picture below. This basically tells us what pitch a sound will be played.

A chord progression, which is the focus of this post is the sequencing of chords to form a harmony.

This is another chord progression, C-Am-F-G: 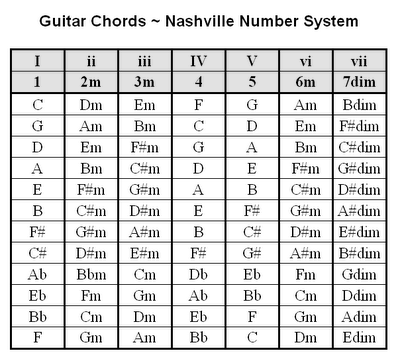 To get more insights from the songs collected, additional information about the songs were retrieved from Spotify using their API. Spotify is generous enough to share a lot of information about the songs in their catalog. The song features retrieved for this exercise were the song's release date, its popularity rating in Spotify, and the valence score. In Spotify, the valence score is a measure of the song's mood. If the valence is close to 1, it is a happy sounding song. Songs with valence score close to zero is a moody or sad song.

A bar chart was created to see how many songs there are for each chord progression. 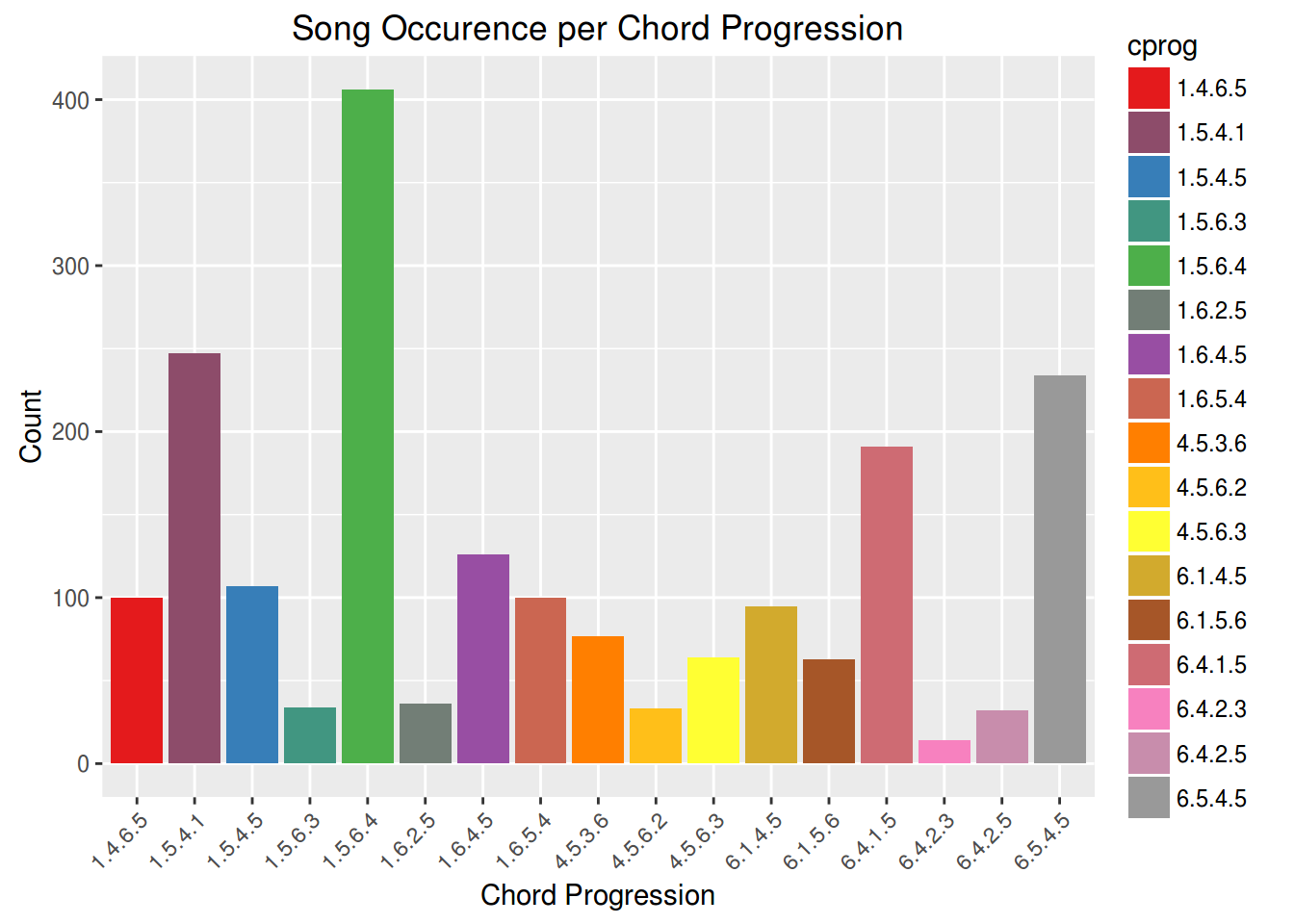 The chart shows that there are proportionately more songs with the I-V-vi-IV progression than any other in our dataset. This observation validates the music video's premise that this chord progression is commonly used in modern music.

It was disappointing to see that the dataset did not have enough songs from the past to make a convincing exploration. The bar chart below shows this. 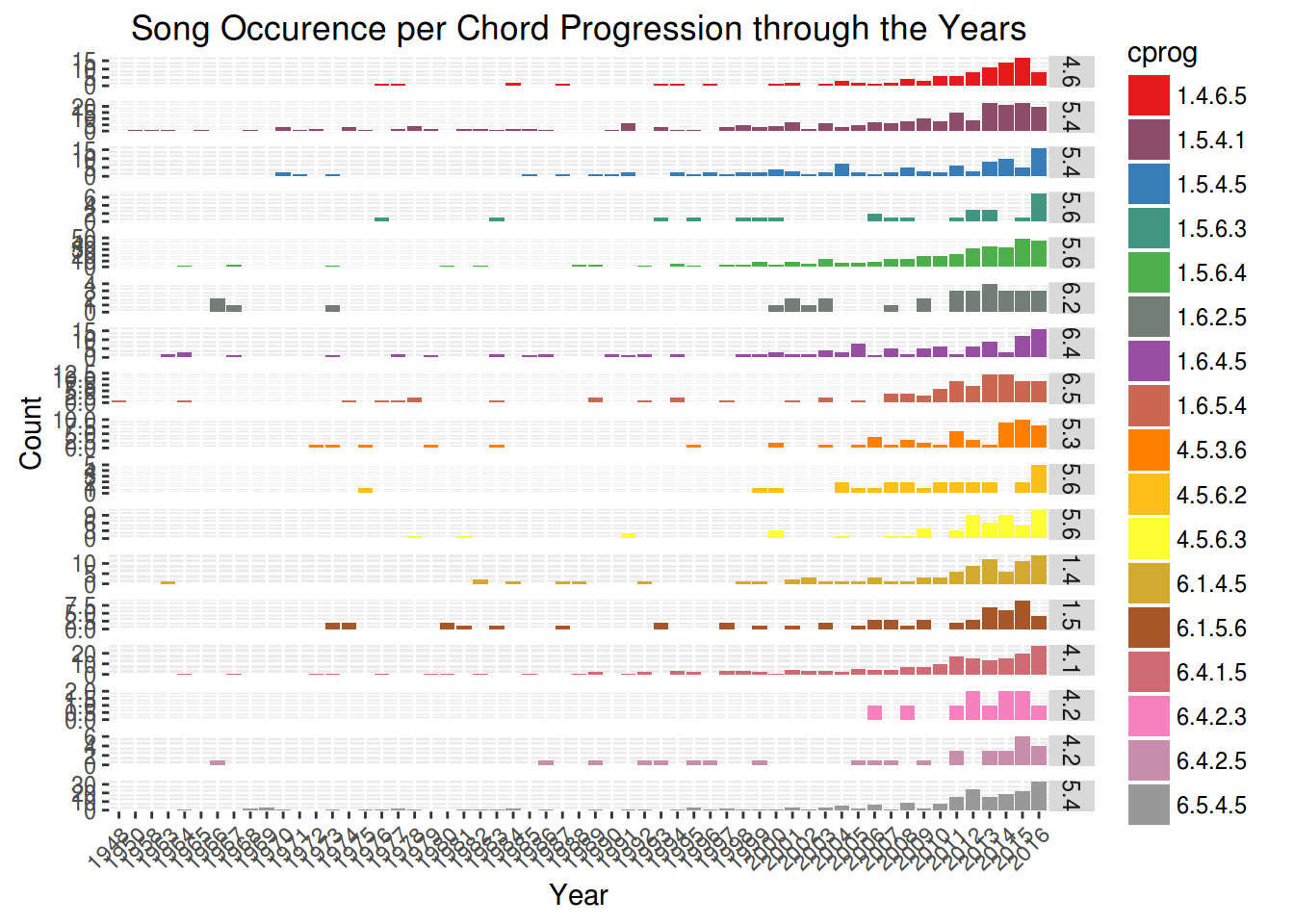 Data on Popularity and Mood

The popularity and valence metrics retrieved from Spotify were used to explore whether chord progression has any influence on the song's popularity and the mood that the song conveys. 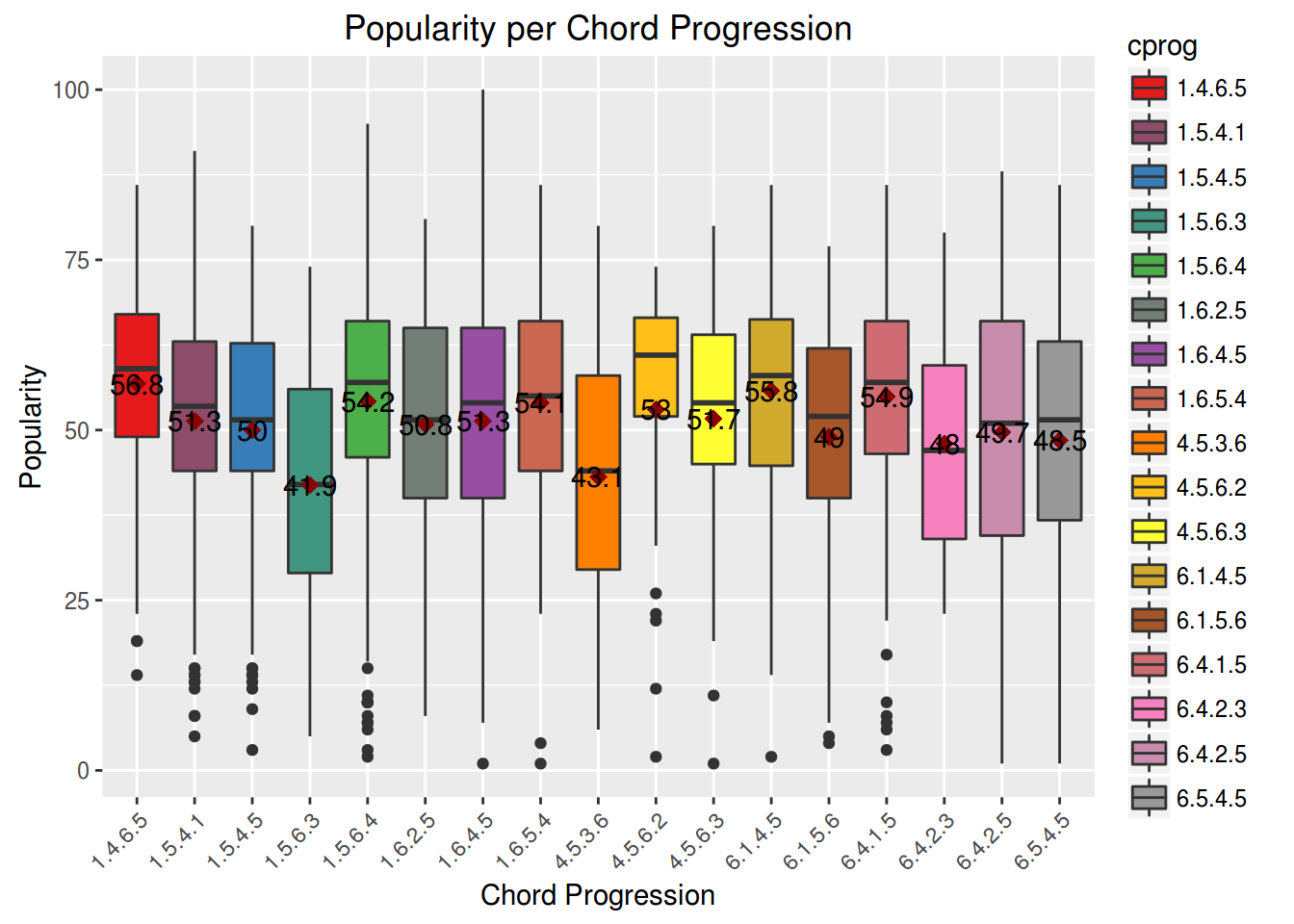 The box plot of popularity against chord progression shows that I-V-vi-iii and IV-V-iii-vi stand out as being much lower than the rest. However, most of the progressions don't seem to differ much from each other. 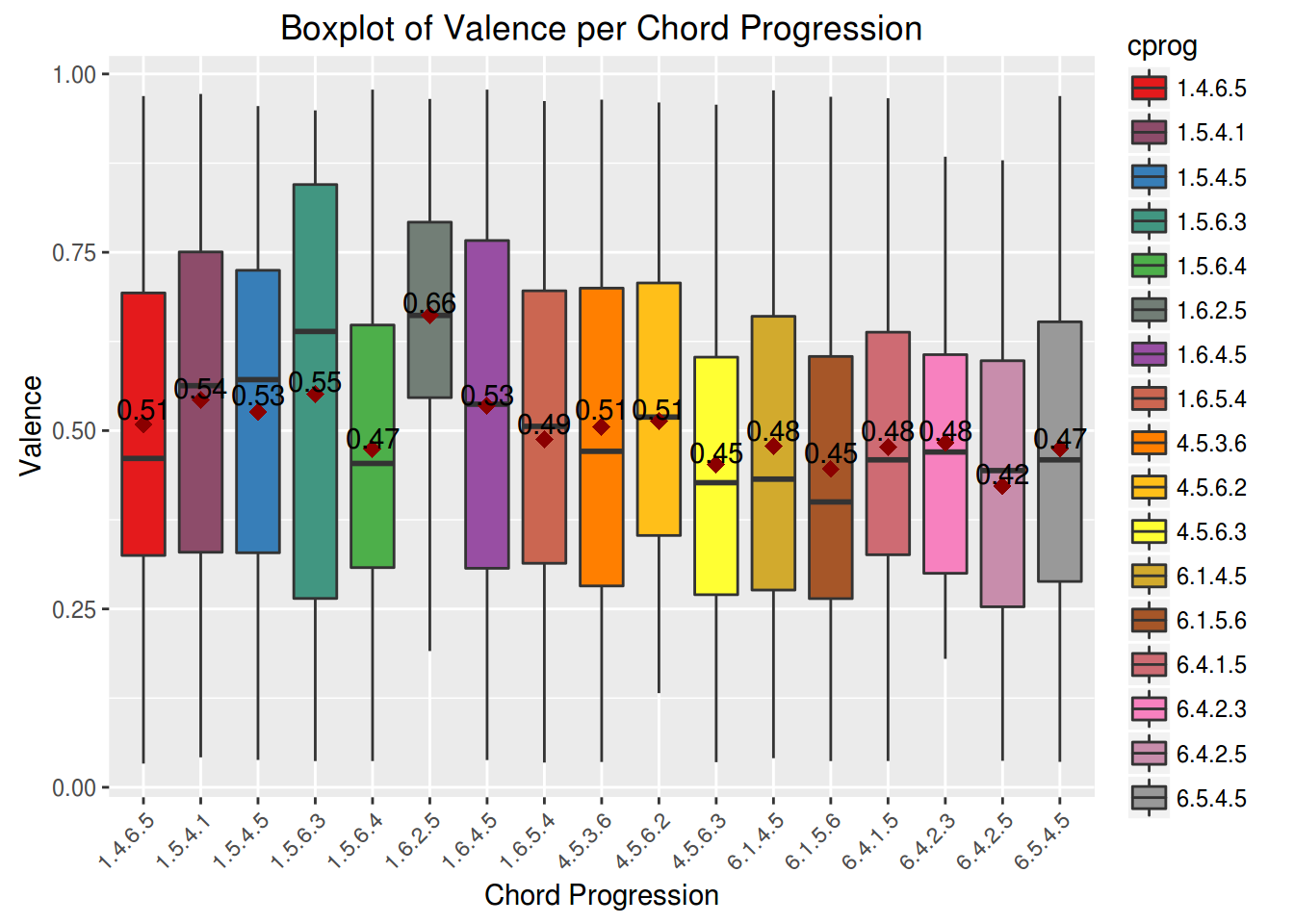 The box plot of valence vs chord progression seems to show a trend of lower valence for the chord progressions starting in vi than the rest of the other progressions. To get a different perspective on this observation, a density plot was created. 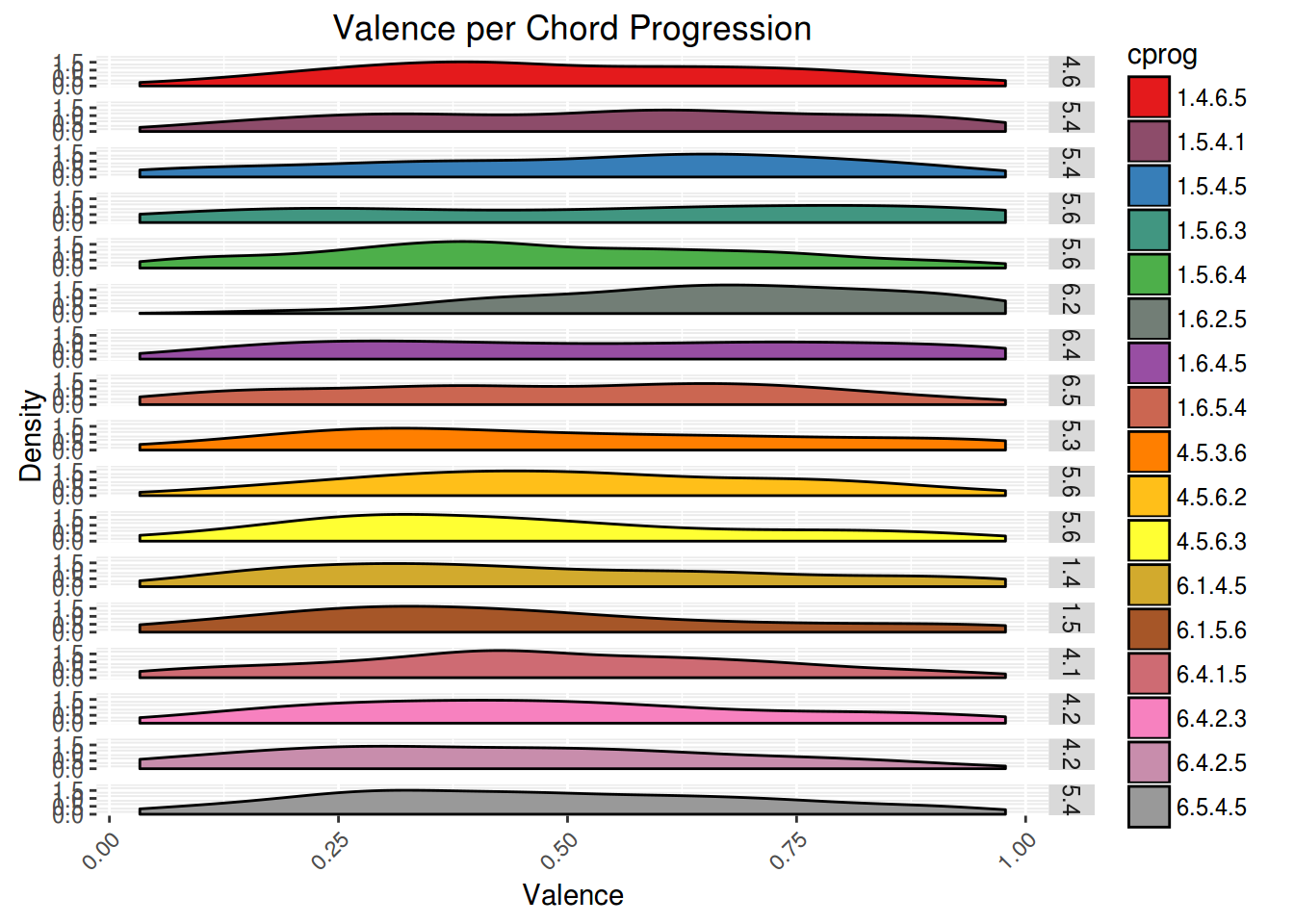 It seems that the density plots in the bottom have a common right-skew.

Visual inspection is never enough proof to say that a trend exists that's why an ANOVA test was done on the popularity and valence means. The results of both test, shown below, shows us that there is a statistically significant difference between the means. What this implies is that songs using a particular chord progression may be more popular than others. It could also imply that songs with the same chord progression sound happier than others. But in order to see which particular progression causes the difference, a posthoc test needs to be done.

A posthoc Tukey test will compare all possible pair combination. In this particular dataset of 17 levels (chord progressions), we will end up with 136 pairs to investigate for each test. To simplify the analysis, the starting chord of the chord progression was instead considered to minimize the categories into three. These are now chord progressions starting with I, IV, and vi.

ANOVA tests for the reduced levels still show a statistically significant difference between the means in both popularity and valence.

The Tukey posthoc test on the reduced categories indicates that the mean popularity differs with the starting chord, with IV being less popular than I.

When it comes to the mood of a song, a lower valence score is seen when the chord progression starts with vi.

The I and IV chords are major chords while the vi chord is a minor. Apparently, musicians use major and minor chords similarly as how a painter would use a color palette. Using bright vibrant colors elicit happy emotions while dark muddy colors imply sadness. Musicians often refer to the vi chord as the relative minor or the "shadowy" twin. Roughly speaking, major chords have a happier, more open sound, whereas minor chords are darker and more claustrophobic.

copmymusic.com February 11, 2017
With havin so much content do you ever run into any problems of plagorism or copyright violation? My site has a lot of exclusive content I've either written myself or outsourced but itt appears a llot of it is popping it up all over the web without my permission. Do you know anyy ways to help protect against content from being ripped off? I'd genuinepy appreciate it.