Contributed by Adam Owen. Adam is currently in the NYC Data Science Academy 12 week full time Data Science Bootcamp program taking place between January 11th to April 1st, 2016. This post is based on his third class project - web scraping (due on the 6th week of the program).

TripAdvisor's treasure trove of customer reviews on all things travel is just too temping for a marketing data scientist to ignore.  The amount of information available and insights to be gleaned from the TripAdvisor can range from sentiment analysis to competitive pricing to seasonal prediction and correlated complaints.  In this post, I'll pull a few details on hotels listing using a simple scraping program using BeautifulSoup in Python.  I started with a script provided by Boston University for its Data Mining class; however, that script was over a year old and I made several modifications to make it run properly.

After setting up a user_agent, base_url, and an empty data frame, we'll define how to find the create a url for the specific city/state and then return the hypertext reference (href) or pointer using BeautifulSoup:

Great!  We found the city_url. Now let's jump to that page and pull all the html.

HTML: check!  We have a large pile of html code and now we need to parse through it and extract what we want.  I added options just in case the page is wrong.  Additional options could be added depending on the outcome of scraped hotels.

The three components of the program are set.  Now, let's link them all together to create a simple program.  I left out some of the logging details which could be included if you want to take a specific look at errors.  In this case, I left them out.

Finally! We completed a simple program where we can load those definitions into our environment and use the function scrape_hotels(city, state, datadir) to build a data frame of the results.  I created a simple for loop to go through 100 major metropolitan cities and, unfortunately, it came back scarce!  I received results for Salt Lake City, Los Angeles, New York, and Chicago.

In order to get a complete list of all 100 cities I'll have to adjust the get_city_page definition since TripAdvisor changed its website.  This program is for educational purposes and if we were serious about scraping all 100 cities then we could employ several scraping services or rebuild the first href/pointer definition to capture all city pages.  Another option is to surpass the first definition by manually finding each city page and put it in a list for html retrieval and scraping.

This case reminds us that scraping has a short shelf life because of the zero control a programmer has over the web development.  Several services scrape basic websites and many of those are free including the plug-in for Google Sheets.  That's the first line of defense for a new project and then one could proceed to complicate your life.

WHAT DID WE JUST SCRAPE? 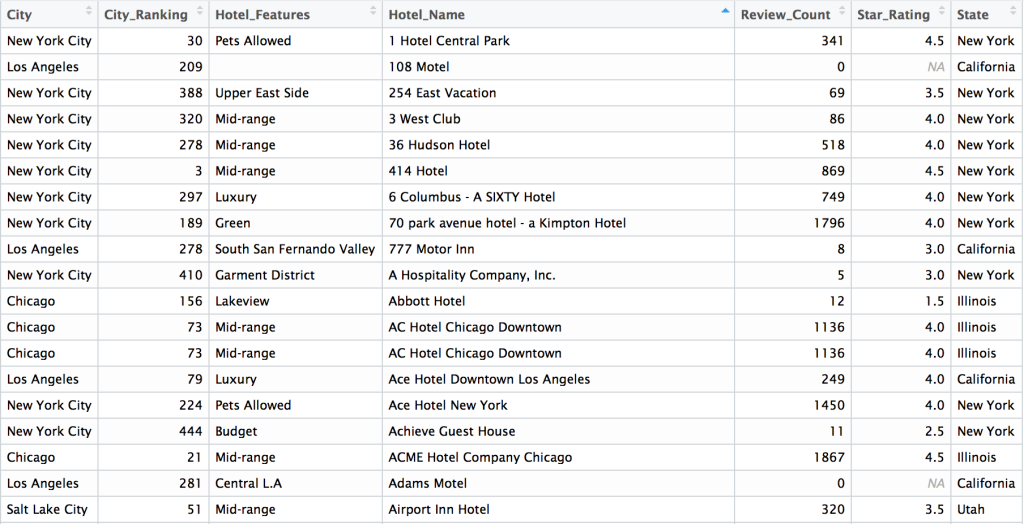 Note: City_Ranking is defined by TripAdvisor as the best hotels in each city.

After uploading RStudio, I began some initial analysis and visualizations of the data.  You can checkout the R-code github link here.

Let's first look at a bubble chart of Hotel Ratings and City Reviews. 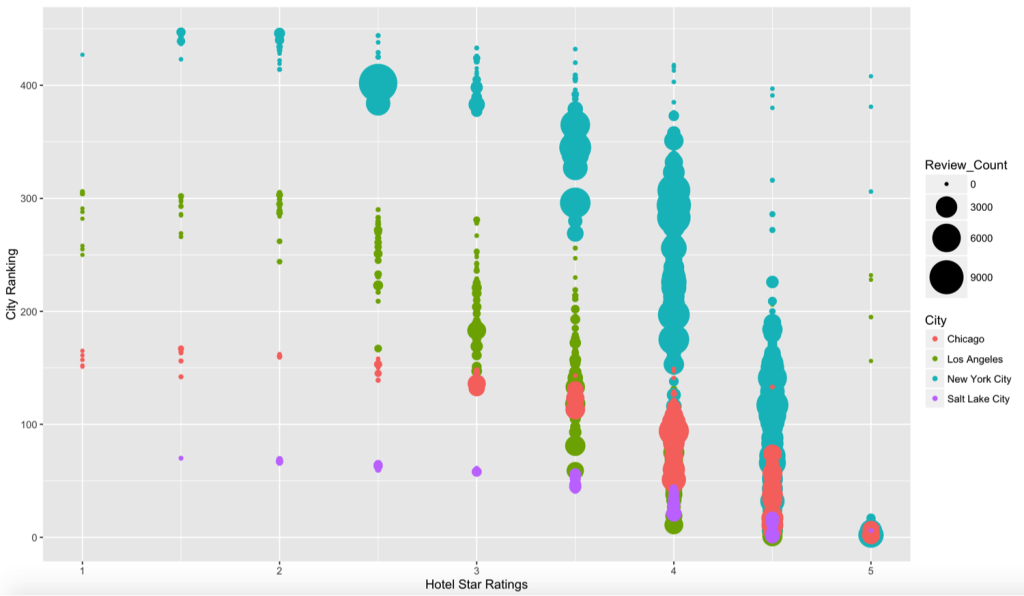 This chart displays the rankings of hotels correlated with city ranking.  We should see a high correlation between City Ranking and Hotel Star Ratings and that is largely what we see.  A couple of interesting notes is there are a handful of 5-star hotels that have low City Ranking particularly in NYC and LA.  Those contrary ranked hotels also don't have many reviews which could mean those are errors or hotels never traveled.  Another interesting observation is the lack of 4-star hotels and above in LA.  Also, Chicago overcomes has a large abundance of 4-4.5 star hotels while LA has an abundance of 3-3.5 star hotels.

Not, let's take a quick look at the features grouped by city: 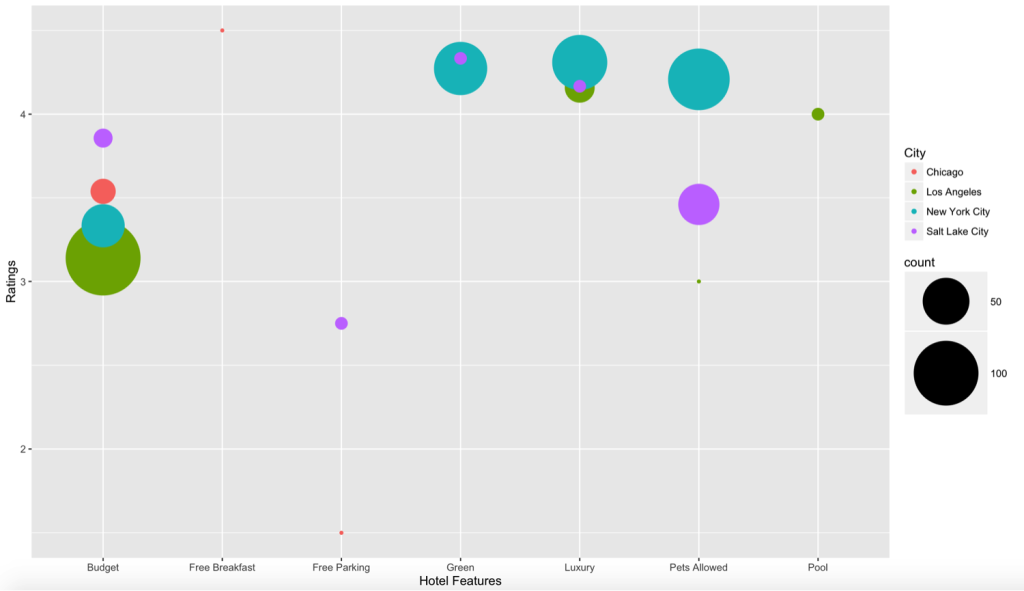 SLC has a surprising number of hotels that advertise "Pets Allowed" while LA is the king of "Budget" hotels.  Chicago's advertised features mirror NYC but in smaller quantities.  They are not visible because NYC overcomes the Chicago hotel counts.

Another graph we can explore is the review count and ratings by feature: 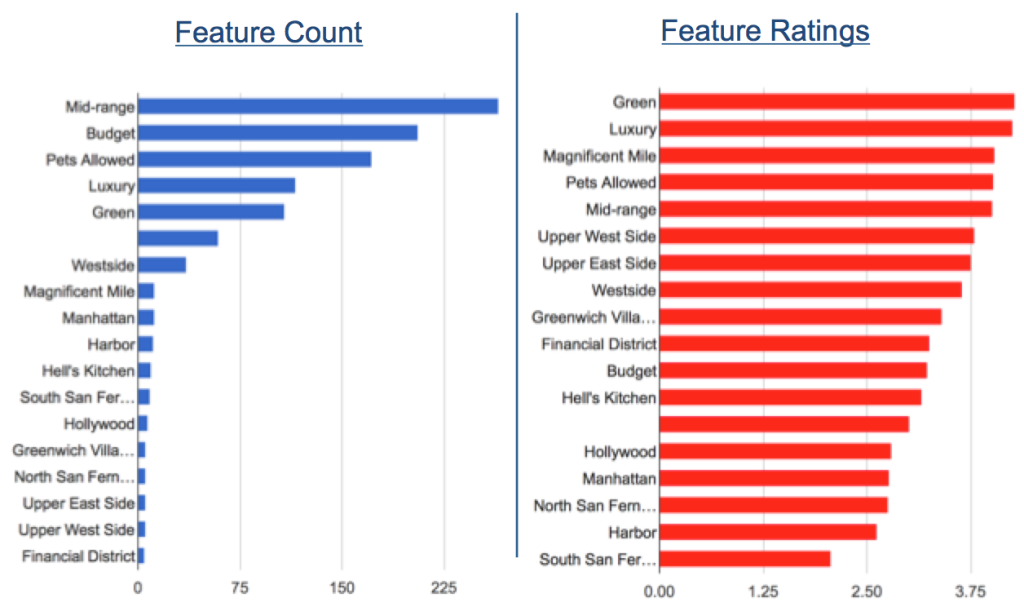 "Green" and "Luxury" hit the top of the list for ratings and "Mid-Range" and "Budget" are most reviewed.  It's interesting that "Pets Allowed" hit high on both count and ratings.  It's also very interesting to see how often neighborhoods are advertised on the featured hotel add such as "Magnificent Mile" and "Westside".

We found a handful of interesting insights from our TripAdvisor program.  We also created a program to scrape TripAdvisor hotel listings and we can add new functions to scrape additional data. It will need additional coding before it's ready for full production but it's a great start.  The next step in our analysis, once the scraping program is in top shape, is to add data including full reviews, highlighted reviews, pricing, and any other info we can find.

Another interesting point would be a quick analysis of TripAdvisors ad placement on the page which may give a competitor a hint to TripAdvisor's recommendation algorithm.  We have a great starter script to continue additional analysis or for another scraping project.  As with all most data science projects, many questions and limited time to answer them all!

Google February 6, 2022
Google Here are some links to sites that we link to due to the fact we believe they are worth visiting.

Google July 25, 2021
Google Below youll uncover the link to some sites that we assume you ought to visit.

Google November 24, 2019
Google That may be the finish of this article. Here you will discover some sites that we consider youll value, just click the links.

Google September 18, 2019
Google We like to honor quite a few other web internet sites on the internet, even when they arent linked to us, by linking to them. Under are some webpages worth checking out.

真人百家樂 September 15, 2016
Thanks for the good writeup. It in truth was once a enjoyment account it. Look complicated to more delivered agreeable from you! By the way, how can we communicate?