Contributed by Thomoas Kolasa. He attended in the NYC Data Science Academy 12 week full time Data Science Bootcamp program taking place between January 11th to April 1st, 2016. This post is based on his third class project -  python web scraping(due on the 6th week of the program).

As one of the five original Olympic events, fencing has a storied history. While some fencers trace their maestros' lineage back generations, data shows the globalization of fencing creates new schools that make the sport evolve more than ever. The Fédération Internationale d'Escrime (FIE) governs the sport and runs the global ranking system.

Fencing results are available at https://fie.org/results-statistic/result from about 2002 onwards, so I collected them using URL manipulation and Beautiful Soup 4. Each tournament had a name, place, country, date, and tournament type. I made sure to record the entire tournaments list and check if they spread over multiple pages. Since I also accessed the URLs of the specific tournaments, I was also able to gather the results for each tournament, including points earned 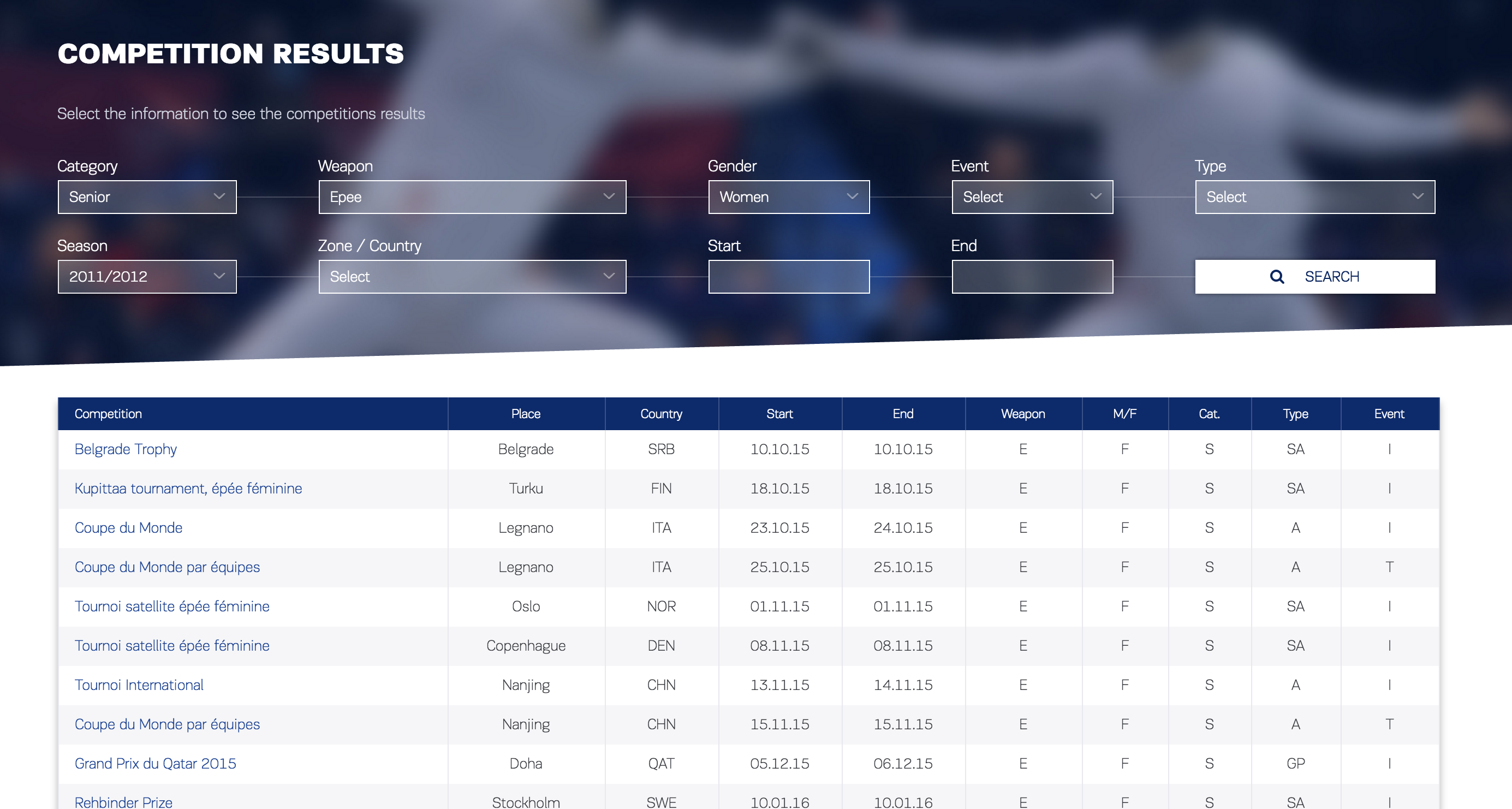 The results for each tournament included:

Investigating the data, I calculated the age of each fencer on the day of each tournament. Looking at a histogram of all tournament winners, fencers seem to get gold medals in their mid to late twenties. 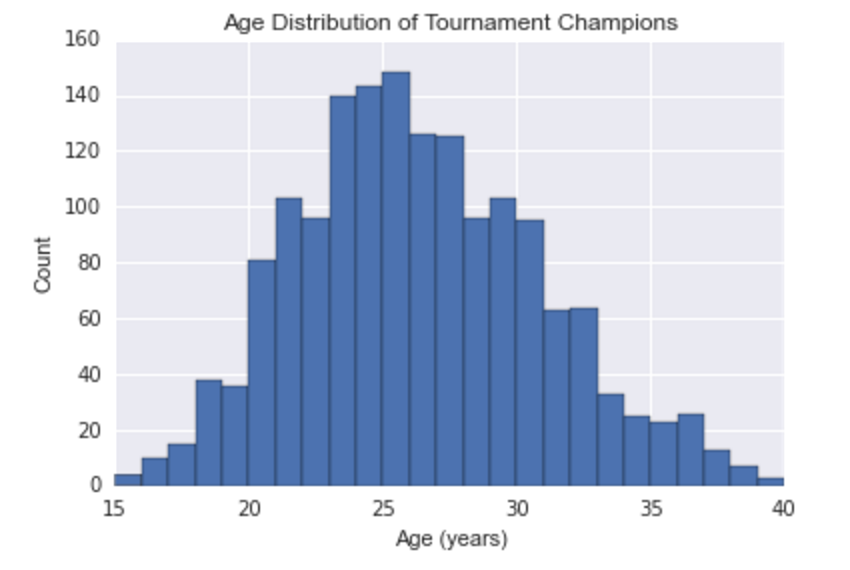 Is there home piste advantage in world cup fencing?

I next investigated if there is a home-field advantage in fencing like in other sports. I considered a home tournament to be in a fencer's home country. This means that a "home" tournament would include an American from the west coast fencing in a world cup in New York or a Russian fencer from Siberia fencing in St. Petersburg. I also only looked at world cup and grand prix results between 2010 and 2015, the period when the FIE standardized the number of world cups. Even though Grand Prix award 50% more points, the same fencers show up in nearly all the world cups and grand prix. I therefore normalized the points awarded at these two events to be equal. 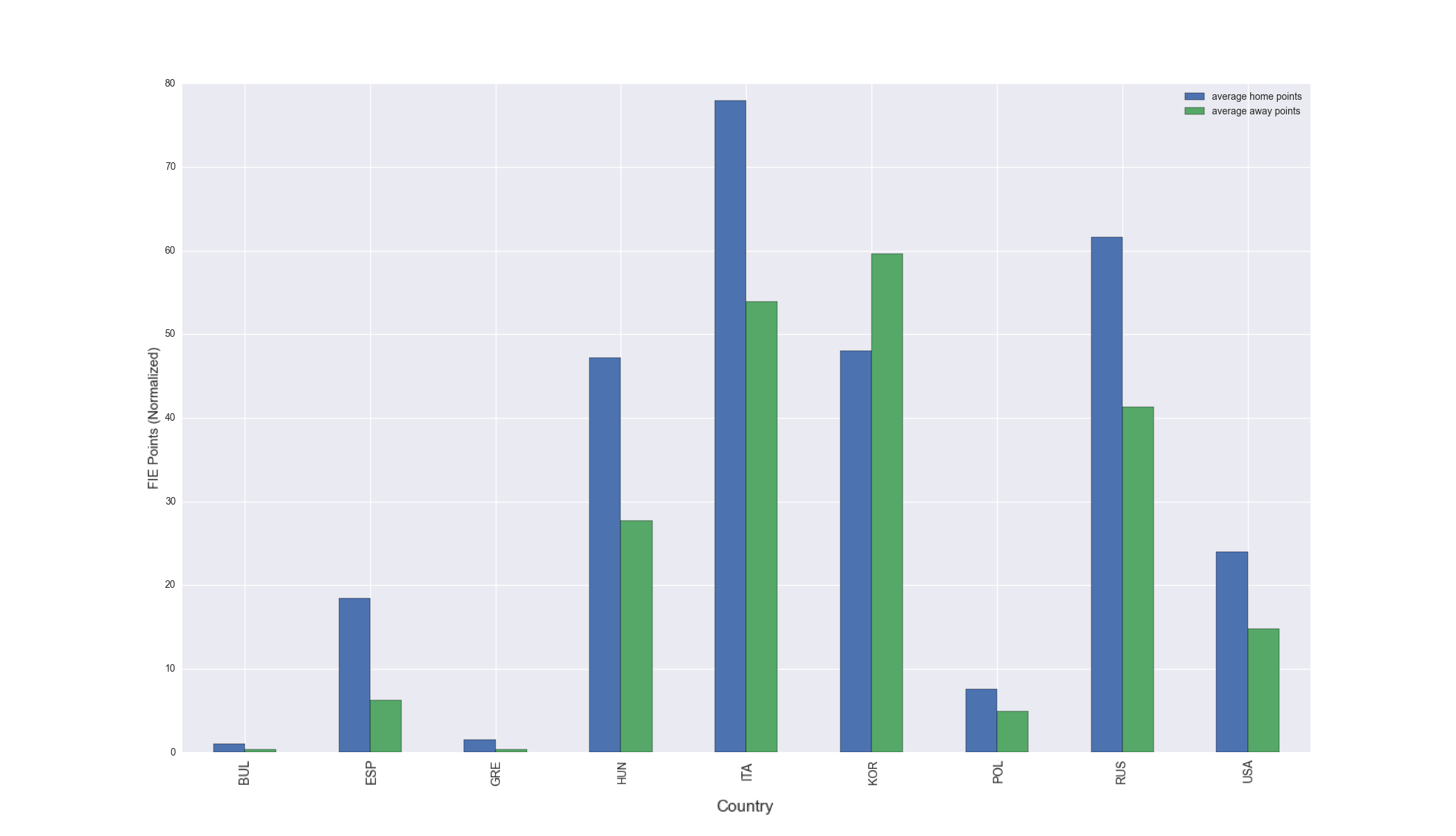 To account for this, I calculated the weighted average of home-field advantage. I looked at high performing countries that scored on average at least ten FIE points abroad so as to avoid the effects of more fencers from weaker countries participating in tournaments hosted at home. I next multiplied the home percent improvement of a country times the home tournament count and divided by the total number of tournaments hosted by high-performing countries. This yielded that men's sabre fencers earned 42.7% more FIE points at home than abroad.

Does this advantage exist in épée?

I next investigated men's épée world cup and grand prix results. In épée, the referee does not have to determine which fencer has the right-of-way and thus makes far fewer subjective calls. I similarly looked at FIE points earned by fencers in their own countries. 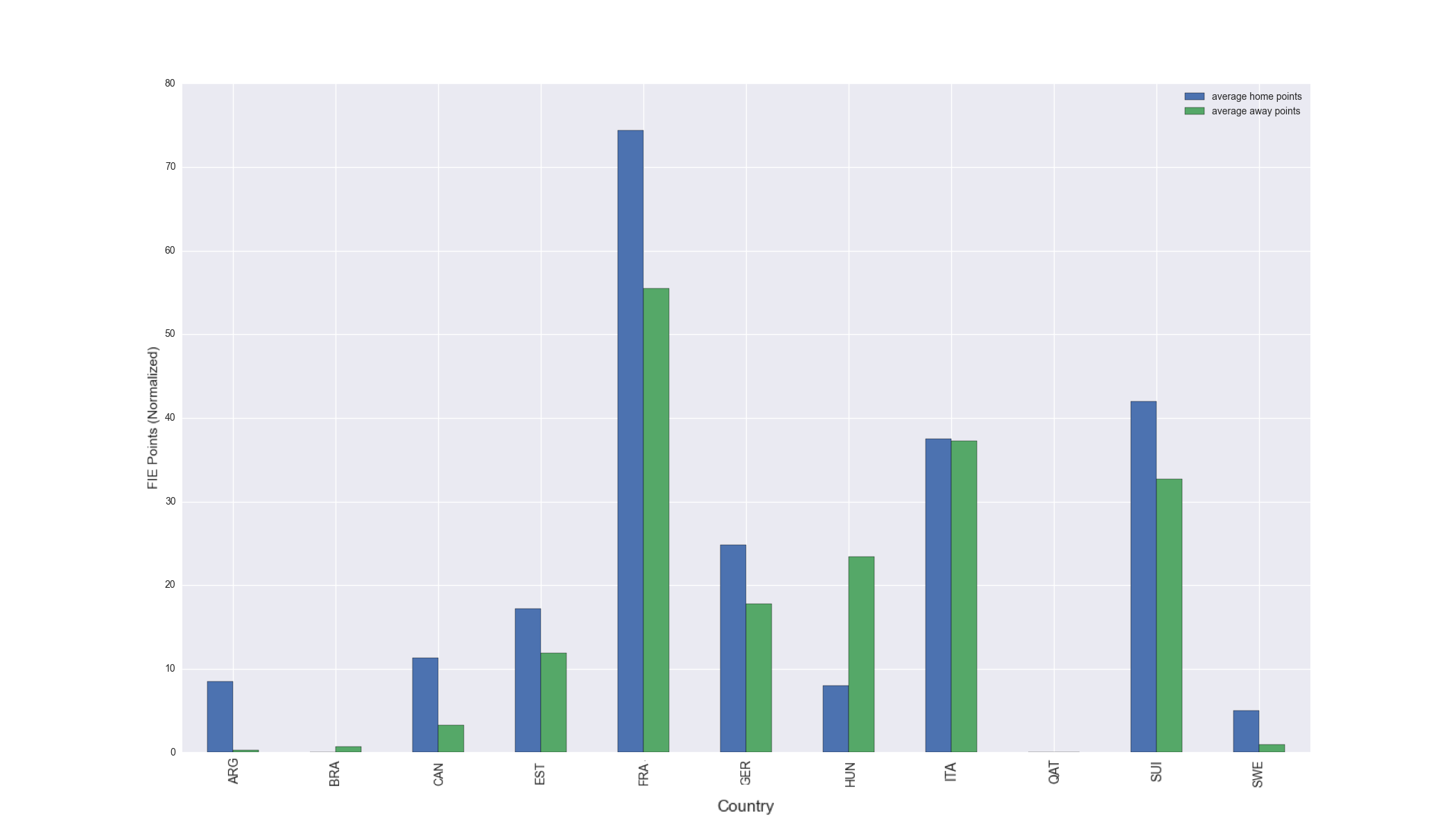 Looking at a similar calculation of home country advantage for countries that on average score at least ten FIE points abroad, I found that men's épée has a home-country advantage of 26.9%.

Since men's sabre fencers had a 42.7% home country advantage, does this mean that right-of-way calls in sabre unfairly go to local fencers? Possibly. But with such a small sample of data, many confounding factors can account for this discrepancy. Since sabre is more fast-paced than épée, the psychological and physical advantages of fencing close to home may have a different effect. It would also be worth comparing these results with the advantage in foil and in all three women's disciplines.

To more thoroughly look into the fairness of fencing, one has to look at bout-level data.

For the tournaments with bout data, I collected direct elimination bout data including the fencers, their countries, and the rounds when the bouts took place, and the scores. The inconsistencies in the FIE's site made it a time-consuming process, especially with regards to preliminary rounds.

Results for each bout included:

A sample bout tableau from the quarterfinals onwards: 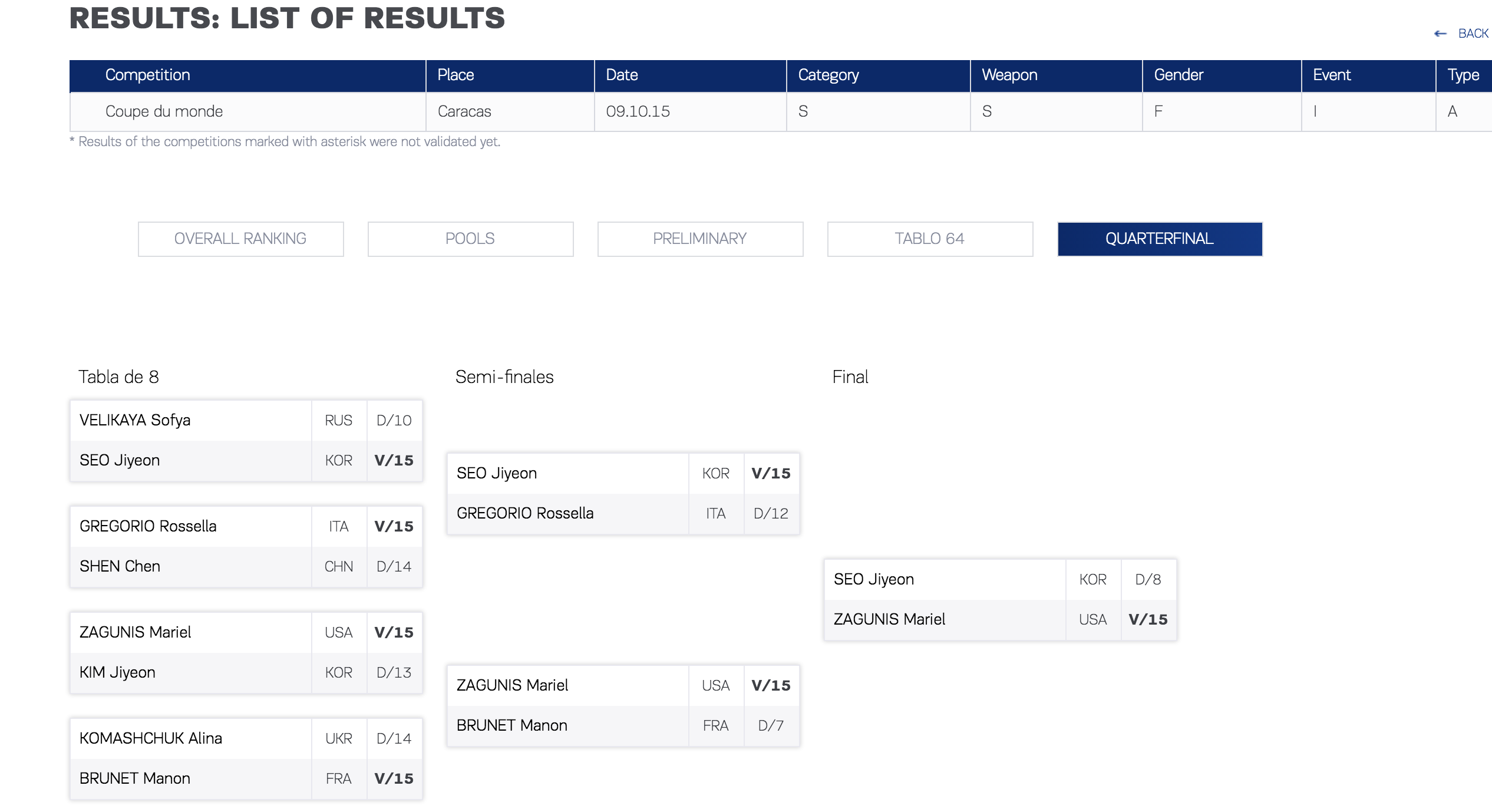 While I originally wanted to analyze bout data going back many years, the website no longer has bout data available before 2014. Consequently, there was not enough data to perform much viable machine learning analysis on the data.

A further issue with the available data is that very few tournaments release referee data. Even though refereeing has improved drastically with the advent of video replays, consistent referee data would allow for better reviews of performance and an evidence-based certainty of impartiality among officials.

sisi gao March 20, 2021
Hello there, I am a maths student doing an internal assessment, is it ok if I have this data spreadsheet for finishing my work please? My email address is [email protected] Thank you so much!!