OpenTable is a SAS company that focuses on connecting people with restaurants throughout the world.  OpenTable provides information on the location, cuisine, price range, rating and number of reviews for many restaurants throughout the world.  A key feature of OpenTable's great success is its  online reservation system which includes rewards.  Restaurants pay to be a part of the OpenTable system and are charged a dollar per seat reserved through the website.  This relationship results in OpenTable skewing their review data toward higher ratings.  The lowest rating a restaurant on OpenTable can receive is 3 out of 5 stars.

Data on The Web Scraping and Cleaning Process

The data was collected using Scrapy. Getting the data to analyze required sifting though many paths.  Starting on OpenTables main page I collected all of the URL's associated with each area.  Sixty areas in total were collected.  The collection ranged from 6,580 restaurants in Miami, United States to 68 restaurants in Kyoto, Japan and many in between.  Once each area was collected the URL's  associated with each area needed to be generated.  The URL's included a latitude, longitude and metroID.  This information was collected from the main page of each area and then formatted to redirect by each location.

Finally, I scraped every restaurant off of OpenTable and collected the area, location, restaurant name, review count, rating, cuisine, cost, link to the restaurant, positioning on the website page,  booking information for that day and weather or not it was currently being promoted.  In total 163,831 restaurants were collected.

For the majority of the data analysis the 163,831 restaurants are reduced to 23,727 restaurants, where all restaurants with less than 50 reviews are eliminated.  This would prevent outliers with very few or  no rating at all from heavily impacting the analysis.  However this also scews the information presented to represent a subset of all restaurants that may not be representative of the entire population, an important aspect to keep in concideration.  This issue is illustrated in the pie charts below.  A larger percentage of expensive resaurants are represnted in the final dataset. 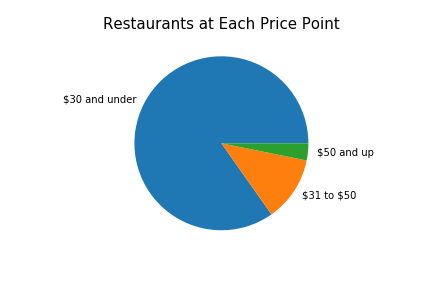 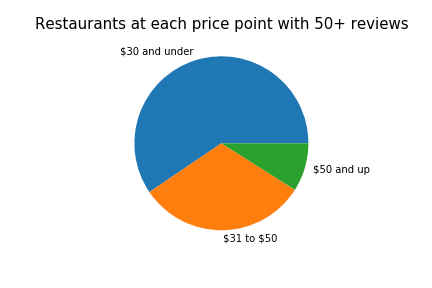 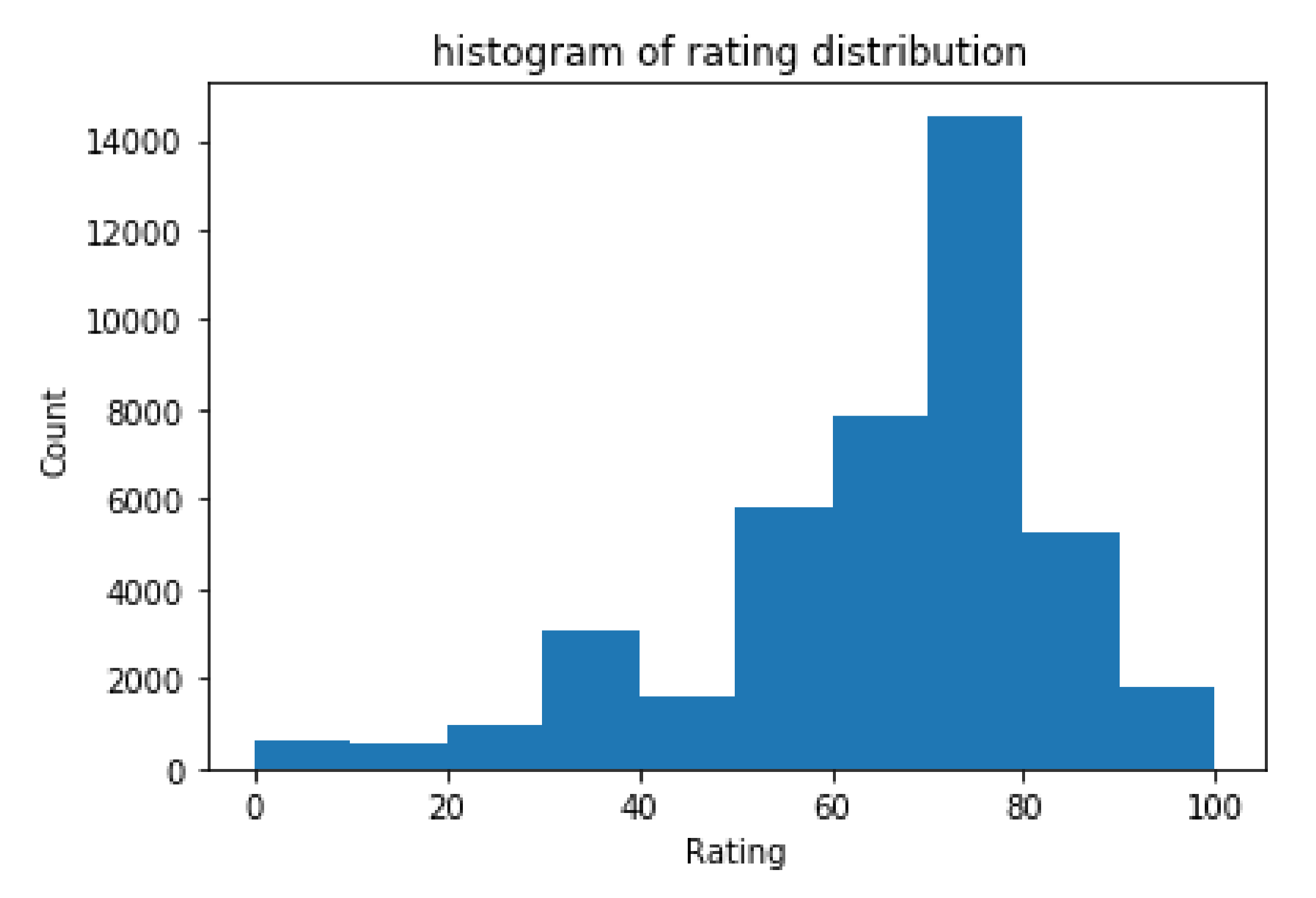 Rating Based on Area

This graph illustrates how scewed the OpenTable data is toward higher ratings.  Only 8.32% of all restaurants in the dataset have a rating below 4 starts.  In order to idntify the best location to open a restaurant we are going to use a funneling approach.  Looking only at the four major cities in the United States we compare ratings and popularity. 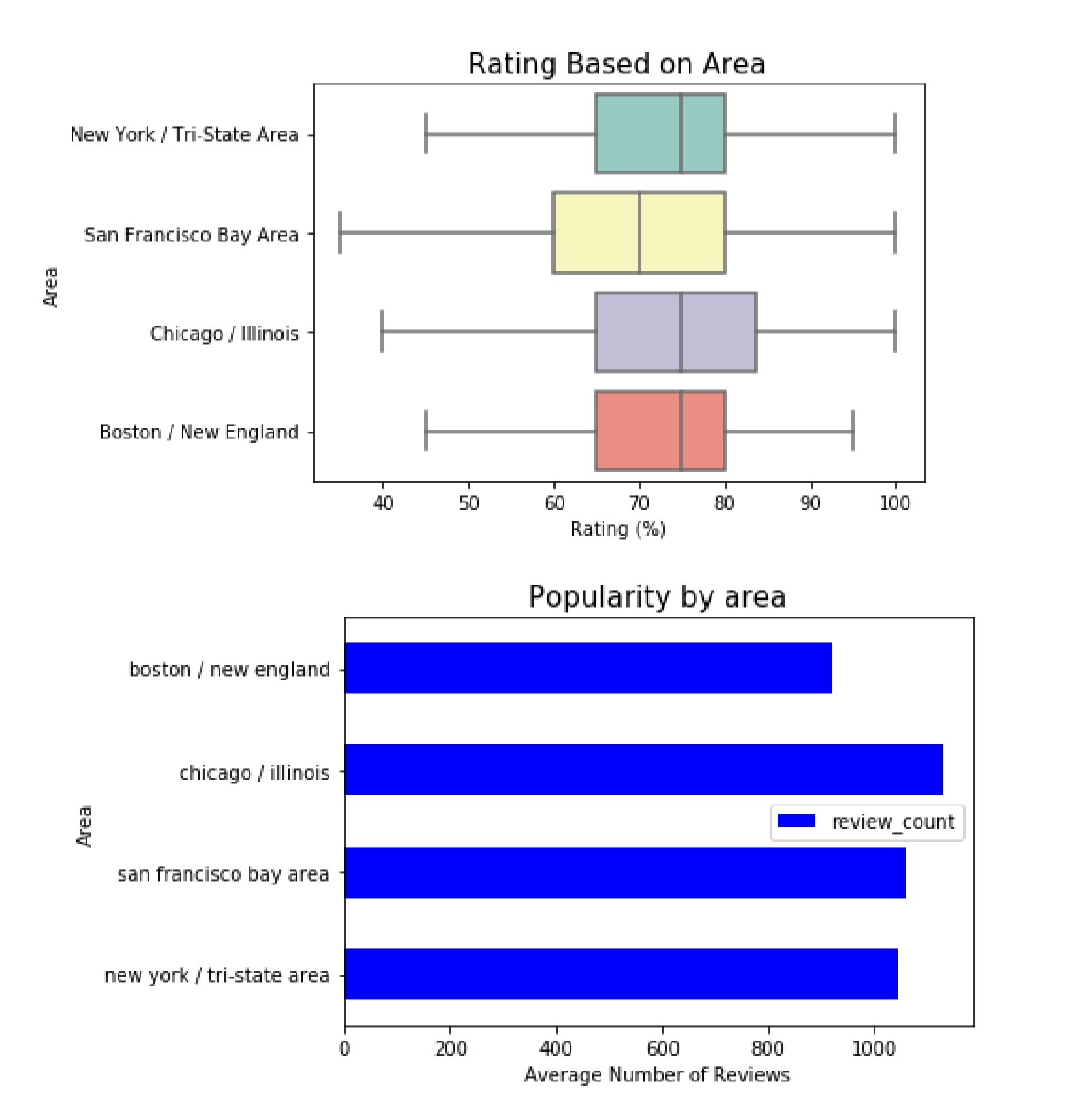 These graphs indicated that Chicago restaurants are more likely to be successful on OpenTable.  They receive more reviews on average and have a heigher average reveiw.  Now we will investigate the top neihgborhoods within Chicago. 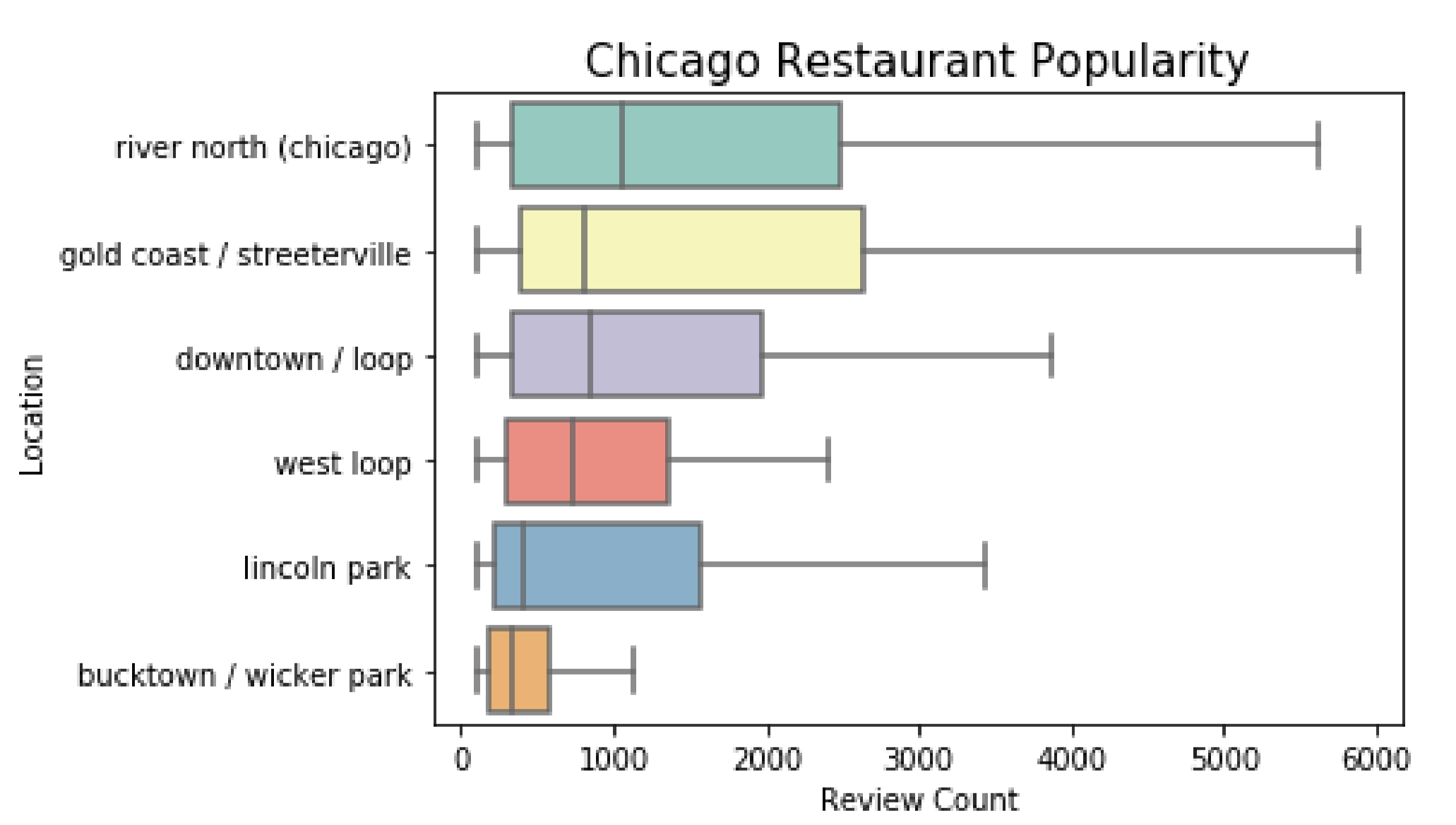 River North and Gold Coast  are comparable in popularity, lets investigate further by splitting each neighborhood by cost.  The Gold Coast in Chicago seems to perform particularly well in the upper end price range. 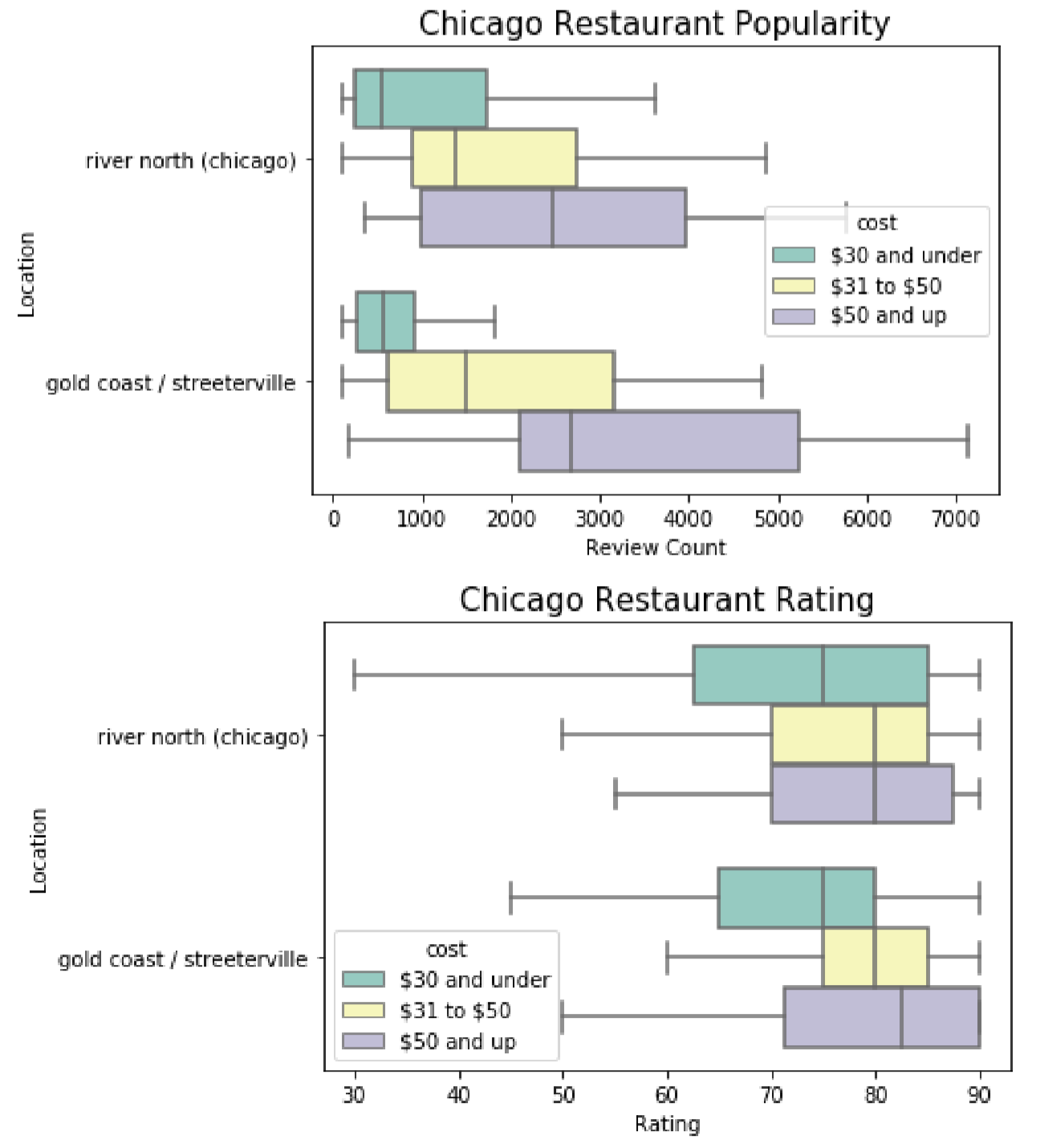 So what food would be best to sell?  Below we compare the top cuisines represented on OpenTable and compare their performance within Chicago. 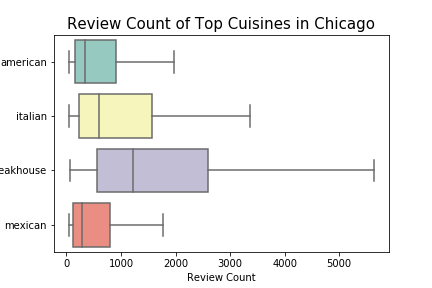 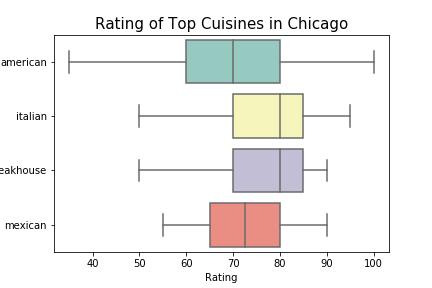 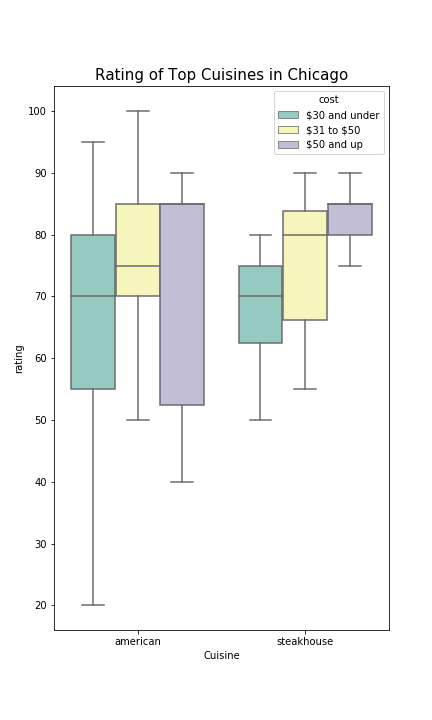 From these graphs it is clear that Steak Houses outperform other cuisine types.  Finally we compare this choice with all restaurants in our dataset and all steakhouses to see if our proposal is accurate. 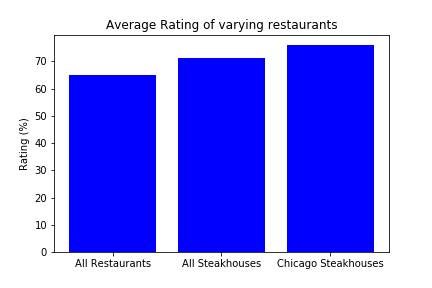 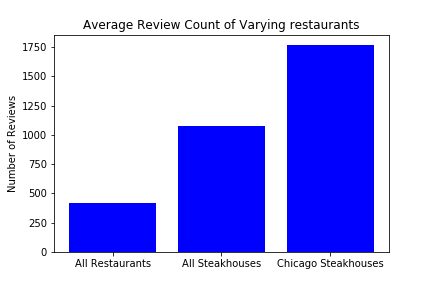 These graphs support the claim.  While this approach is not exhausitve and does not represent the full investigation that a perspective owner might do before opening a new location it demonstraites an apporach to investigating large data to come to a conclussion.

When using the number of reviews and the ratings of restaurants in the four major cities in the United States as criteria for success it is shown that, if you were considering investing in a restaurant, a likely successful location would be a steakhouse in Chicago.  With a smaller standard deviation in both ratings and review count as well as higher average ratings and reviews, steakhouses in Chicago are less likely to fail than other restaurant types through out the United States.

Michael Emmert graduated from The George Washington University in May of 2019 with a Bachelors degree in Mechanical Engineering. Through his Bachelors he gained skills in mathematics, communicating ideas to non-technical groups, data manipulation and trend identification as...
View all posts by Michael Emmert >