Data Study on Television Trends as a Social Indicator

Contributed by Emil Parikh. He is currently in the NYC Data Science Academy 12-week, full-time Data Science Bootcamp program taking place between January 9th to March 31st, 2017. This post is based on his second class project - Web Scraping.

There are various indicators in disciplines such as economics and politics that measure the state of different aspects of their fields. That is why—when events around the country in the past few years have caused people to question the state of the US and how surprised they are about "who this country is"—I am surprised there is no indicator that can tell us who we are and where we are going socially as a country; data shows there are a collection of indicators that describe the social environment in terms of such things as poverty, obesity and suicide rates, but these largely describe outcomes and consequences rather than preferences and personality.

Spoiler Alert! A full solution to such a complicated task is beyond the scope of this project; a full solution would require multiple scraping projects and continued feedback from professionals in social psychology. I will address this again in the next steps section. Instead, I used this time to take a first step in building a social indicator by scraping and visualizing information about television shows. 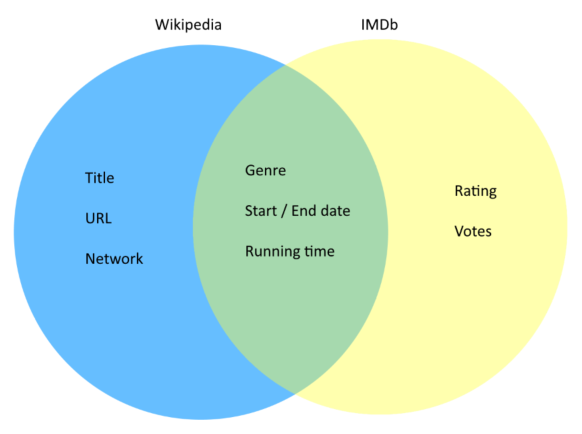 While show titles could be found in both, I needed to scrape them off of Wikipedia in order to

Screenshots of two Wikipedia pages I scraped TV show titles and URLs from: 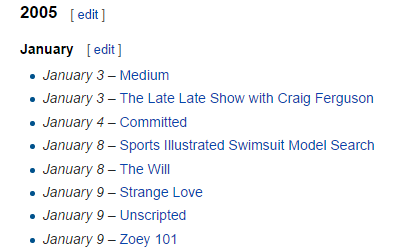 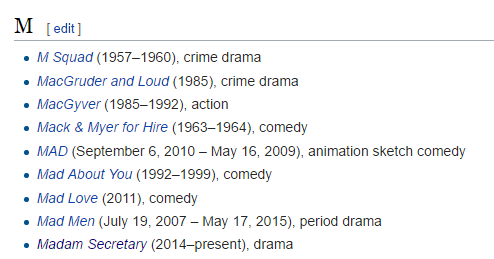 Screenshots of a Wikipedia show page from which I retrieved information: 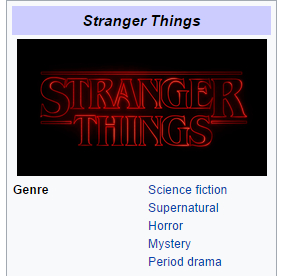 For fields common to both Wikipedia and IMDb such as genre and start/end date, I still retrieved their information from Wikipedia; Once the scraping was finished, I filled in any missing data by collecting the same information from IMDb along with IMDb rating and number of votes.

A sample of my Wikipedia TV show scraper

Using IMDbPY to get information about TV shows using show titles gathered from Wikipedia as the search term:

In the app, I have visualizations on

This information is displayed for each year from the 1940s until 2016 by genre and by network.

Screenshots of some of the visualizations:

What we can get out of the genre plots is that the networks and show creators believe that audiences want more comedies and reality shows (shows that tend to require less thinking). Dramas have not spiked up as much. While the shows created in these genres have been on a consistent rise, the number of shows created by the major networks has been on a decline since the mid-1980s. I will need to look into this further.

TV show data alone is not enough to answer "who are we as a society?", especially without viewership data. Some future steps I would take to build upon this project are: