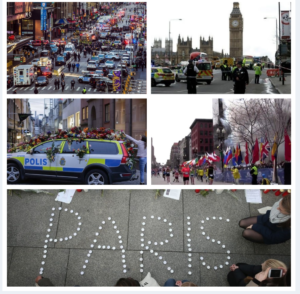 Over the past few years, the Western media has given large attention to terror attacks that took place in many cities in the Western world. We all know that terror attacks, however, were not limited to a certain part of the world. Data shows as many countries have been forced to deal with terror attacks for the first time, I wanted to see whether there are any patterns that can be learned from Global Terror Attacks data set, and perhaps be utilized in order to reach new conclusions.

Are there more terror attacks today?

In the chart below, I presented the number of people who died from terror attacks throughout the world between 1985-2016, broken per relevant regions of the world. The first observation that appeared from this chart is the seriousness of the the threat that terror poses to the world today - beginning in 2012 there is a significant increase in the number of casualties, which continued to increase until 2016 to new numbers that haven't been seen in the past 30 years.

Where exactly did the terror attacks occur?

After revealing what regions suffered most from terror attacks, I wanted to see which countries within those regions were most badly hurt. Using from only the year 2016, I created a cluster map by using exact coordinates that showed the distribution of number of terror attacks per country.

While zooming into the map, I was able to look within those regions that suffered from most casualties and reach new insights: for example, zooming into the Middle East, I noticed that Afghanistan and Iraq were the countries that had the most casualties, and that their neighbor countries - Pakistan and Syria, were also badly hurt. On the other hand, Iran did not suffer from any terror attacks during 2016.

Is there a time of year that is most prone for terror?

Now that we know that terror attacks have become an unfortunate common occurrence, I wanted to see whether there is a time of year that security forces should be more alert. For this purpose, I prepared a chart showing the number of terror attached that occurred in each month between 2007-2016. While the results were inconclusive, the chart detected a trend of more terror attacks during the summer, while a slight decrease tends to occur towards the end of the calendar year.

Are there cities within the U.S. that are more prone for multiple-casualty terror attacks?

Now that we know how big of a threat terror attacks are the the modern world, and when terror attacks are more likely to occur in the year, I wanted to see whether there were cities that were targeted more than others. For that purpose, I defined a "good event" as an event that had zero fatalities, and reviewed the ratio between "good events" and the total number of attacks in each terror attack. The more casualties that died in an event was represented by red colors, while "good events" were colored in blue.

The first finding was that terror attacks were more likely to happen in major cities; and the denser the population was, the number of casualties within that city was higher.